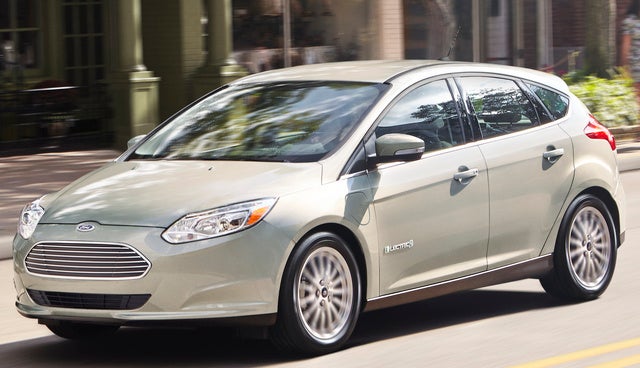 Looking for a Used Focus Electric in your area?

Remarkably, the Ford Focus Electric is now in its sixth model year, although it’s still sold in limited numbers and only in certain regions of the U.S. This 5-door hatchback is currently the only full battery-electric vehicle (EV) sold by Ford, and it competes with other EVs like the Nissan Leaf, Volkswagen e-Golf, Chevrolet Bolt, and the new Hyundai Ioniq Electric. For 2017, the Ford Focus Electric gets a much-needed boost in battery capacity as well as all-new standard DC fast charging. Visually, the Focus Electric looks almost identical to the gas-powered Focus other than some badging and a charging port located ahead of the driver’s door. Underneath, it’s largely the same vehicle as well, aside from the obvious difference in powertrain. For 2017, the Focus Electric is offered in one trim level starting at around $30,000, although tax credits and other EV incentives can drop that cost substantially.

Driving the front wheels of the 2017 Focus Electric is a 107-kilowatt (143 hp) electric motor powered by a lithium-ion battery pack, which was enlarged from 23 to 34 kilowatt-hours for added range. The old Focus Electric managed only 76 miles of range, which was disappointing even in the early days of mass-market EVs. While enough for a commute, the Focus Electric was ultimately beaten by competitors like the Chevrolet Bolt, which has over 200 miles of range. The larger battery pack for 2017 bumps the range to 115 miles, and while that’s a big increase proportionally, it’s still barely enough to get you from San Francisco to San Jose and back. The 2017 Focus Electric is also slightly more fuel-efficient, with a combined fuel-economy rating that has jumped from 105 to 107 MPGe.

Other than its electric powertrain, the Focus Electric is largely the same car as the gasoline Focus, and it’s even built at the same facility. That means sharp handling and a fun driving experience for a 5-door commuter car—the batteries do make the car heavier, but as with most EVs, most of the bulk sits down low and makes for a fairly flat, planted car even when cornering. Like other EVs, the Focus Electric also features regenerative braking to recover the kinetic energy accumulated when the car slows down.

Because of its size, price, and limited range, the Focus Electric will be relegated mostly to urban commuting, which is fortunately where it’s at its best. Electric motors make their torque immediately rather than on acceleration like conventional internal-combustion engines, so the Focus Electric is useful for short spurts of power between lights or in traffic. At anything above highway speeds, though, the car starts to run out of grunt.

Interiors of other EVs like the BMW i3 are intentionally quirky and futuristic—in part to show off the fact that they’re electric—but the Focus Electric’s cabin will be quite familiar to anyone who has been inside a regular Focus. Some screens in the instrument cluster are different, but it’s virtually the same as the gas-powered Focus with a fit and finish similar to that of other cars at this price point. DC fast charging has been added for 2017, but the charger still sits in the rear of the car and cuts down on cargo area, which is one of the appeals of a hatchback in the first place. Focus Electric owners can sync their smartphone with the car via an app to monitor various operating characteristics, and 2017 models come with the new Sync 3 voice-activated infotainment system.

The Focus Electric hasn’t been crash tested yet, but the gasoline variant earned a 5-star overall rating from the National Highway Traffic Safety Administration (NHTSA) for the 2016 model and Good scores on most crash tests from the Insurance Institute for Highway Safety (IIHS) for 2017, aside from an Acceptable rating in the tough small-overlap front test. As for driver-assistance features, the standard reversing camera somewhat makes up for the car’s poor rear visibility. Although the 2017 Focus Electric is suitable only as a commuter vehicle with little to help it stand out against its competitors, it remains a solid choice in the still quite limited EV market.

What's your take on the 2017 Ford Focus Electric?

Users ranked 2017 Ford Focus Electric against other cars which they drove/owned. Each ranking was based on 9 categories. Here is the summary of top rankings.

Have you driven a 2017 Ford Focus Electric?
Rank This Car

Looking for a Used Focus Electric in your area?

Is there a way to determine if transportation is free to my location. This car has a 115 mile range. Most of them are in California and I’m in Florida. Thanks