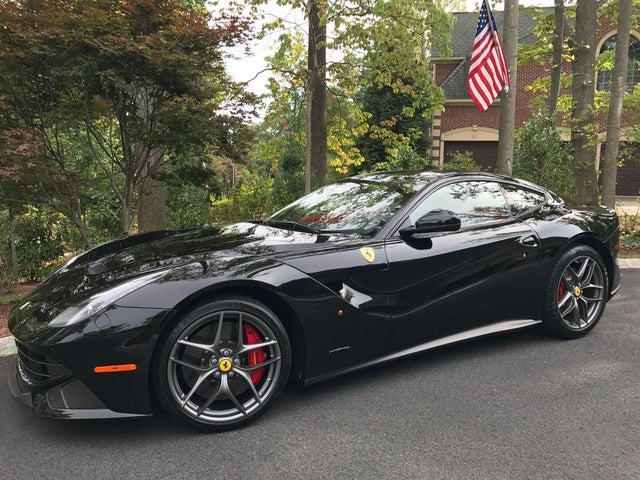 Front-engine V12-powered grand tourers (GTs) are the cars that made Ferrari’s reputation, at least on the road, with a long history going back to the very first street cars sold to the public. This tradition continues with the F12berlinetta, which replaced the 599 back in 2012. Aside from the LaFerrari hypercar, the F12 is the company’s range-topping model, sitting above the 488 with a starting price of well over $300,000.

Last year, Ferrari released a more intense version of the F12berlinetta called the F12tdf, named after the Tour de France Auto, a race that Ferrari dominated in the mid-to-late 1950s. At almost half-a-million dollars, the F12tdf strips weight and adds extra power and exotic equipment to the already potent base F12berlinetta. But buying an F12tdf isn’t a particularly straightforward process—as with other higher-end Ferraris, you must have owned at least five other Ferraris before the company deems you worthy enough to own one. The F12berlinetta and F12tdf are very low-volume cars that don’t see much in the way of year-to-year updates, and the 2017 versions are much the same as last year’s.

As the rest of the world moves to smaller, turbocharged engines with fewer cylinders, the F12berlinetta refreshingly bucks the trend with a normally aspirated 6.3-liter V12 powertrain. As part of Ferrari’s F140-series of V12s that’s been around since the Enzo, the engine has been continually developed, and in the F12berlinetta it makes an unbelievable 729 hp and 508 lb-ft of torque. It can rev all the way up to 8,700 rpm, but 80 percent of the engine’s peak torque comes in at just 2,500 rpm. The F12berlinetta can reach 60 mph in just 3.1 seconds and goes on to a top speed of 211 mph.

The F12tdf takes things to yet another level. While it’s stripped of materials and features to make it lighter, it also has more power on tap, with 769 hp and 519 lb-ft of torque. The redline is raised to 8,900 rpm, the 0-to-60 time drops to less than 3 seconds, and the top speed goes up to 215 mph. Both the F12berlinetta and F12tdf receive Ferrari’s superb 7-speed dual-clutch transaxle, which is operated via carbon-fiber paddles behind the steering wheel, and in the F12tdf, the shifting is even faster.

In addition to the extra power, the F12tdf steps up performance in just about every measurable way. It’s outfitted with 1-piece brake calipers from the LaFerrari, wider front tires, and active rear steering. It’s also 243 lbs lighter than the standard F12berlinetta with entirely different bodywork aside from the roof and A-pillars, all of which translates to a 2-second advantage on Ferrari’s test track at Fiorano.

As one would expect from a car this expensive, the F12berlinetta’s cabin has a premium feel, with a tasteful use of leather, carbon fiber, and aluminum. The steering wheel, laden with Formula 1-honed technology, will be familiar to people who have ever been in another recent Ferrari. It comes equipped with a manettino selector that allows the driver to pick between drive modes to suit any situation, be it sitting in city traffic or cruising the French Riviera. Buyers can also take advantage of Ferrari’s Tailor Made customization service, which offers a variety of materials, colors, and tech features to fully personalize the cockpit. The F12tdf’s interior is an entirely different story with its more functional, track-oriented layout. The carbon-fiber seats are thinner and don’t come with leather upholstery, and the cabin is stripped of many of the convenience features found in the F12berlinetta. It does still have a radio and air conditioning, however.

Cars this pricey don’t get crash tested, and Ferrari hasn’t equipped the F12berlinetta with the kind of active safety features that are becoming increasingly mainstream. However, these kinds of cars will spend most of their time in climate-controlled garages, only to be driven a few hundred miles a year.

Have you driven a 2017 Ferrari F12 Berlinetta?
Rank This Car