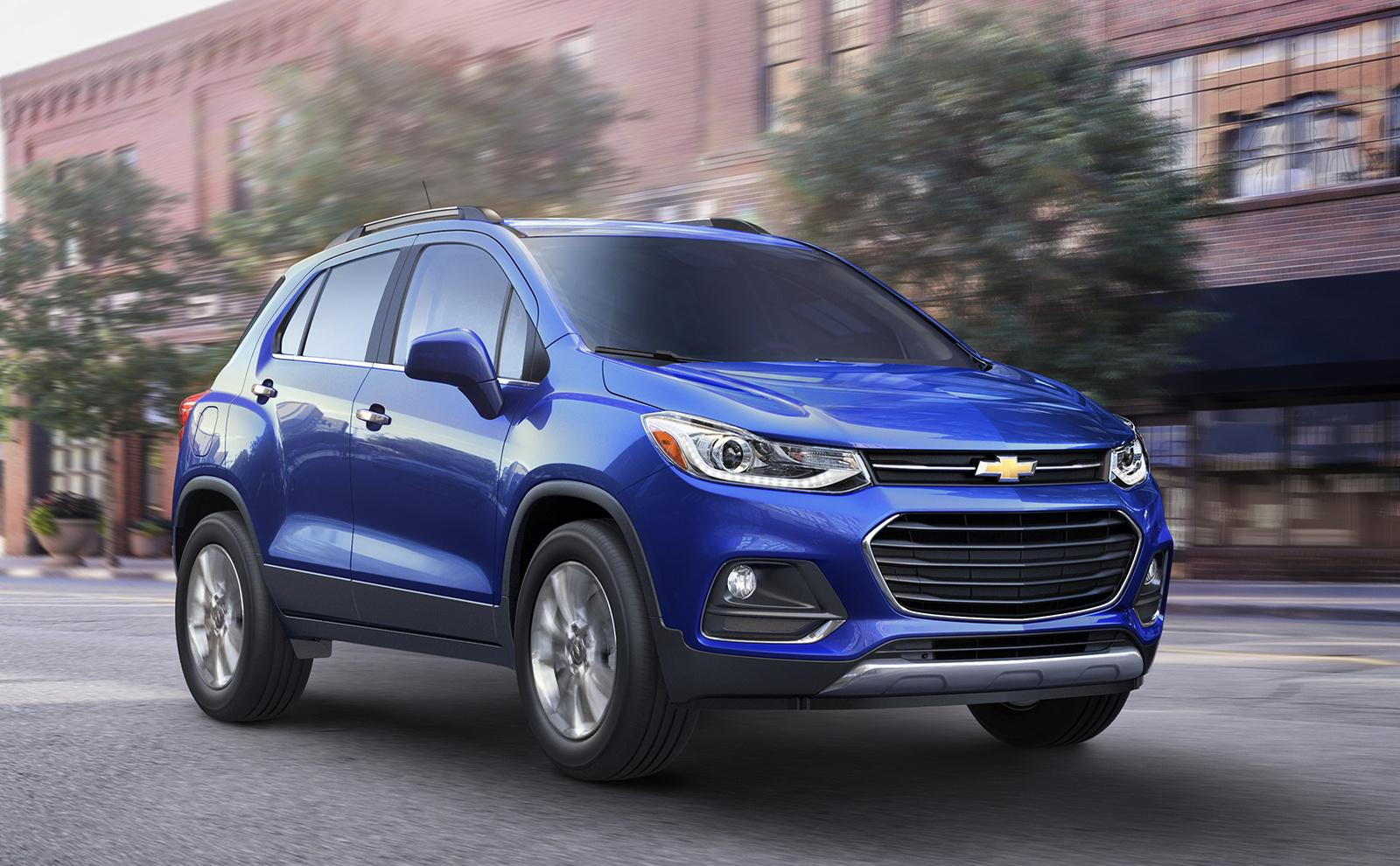 After debuting the Trax in 2015, Chevrolet has gone back and given it a redesign both inside and out for 2017. New front and rear fascias now hold updated lights with projector front beams and LED tails for everything but the base trim, plus standard Apple CarPlay and Android Auto increase connectivity and technological utility. Toss in an extra standard USB port and newly available safety features, and the Trax is asking everyone to “Look at me!” 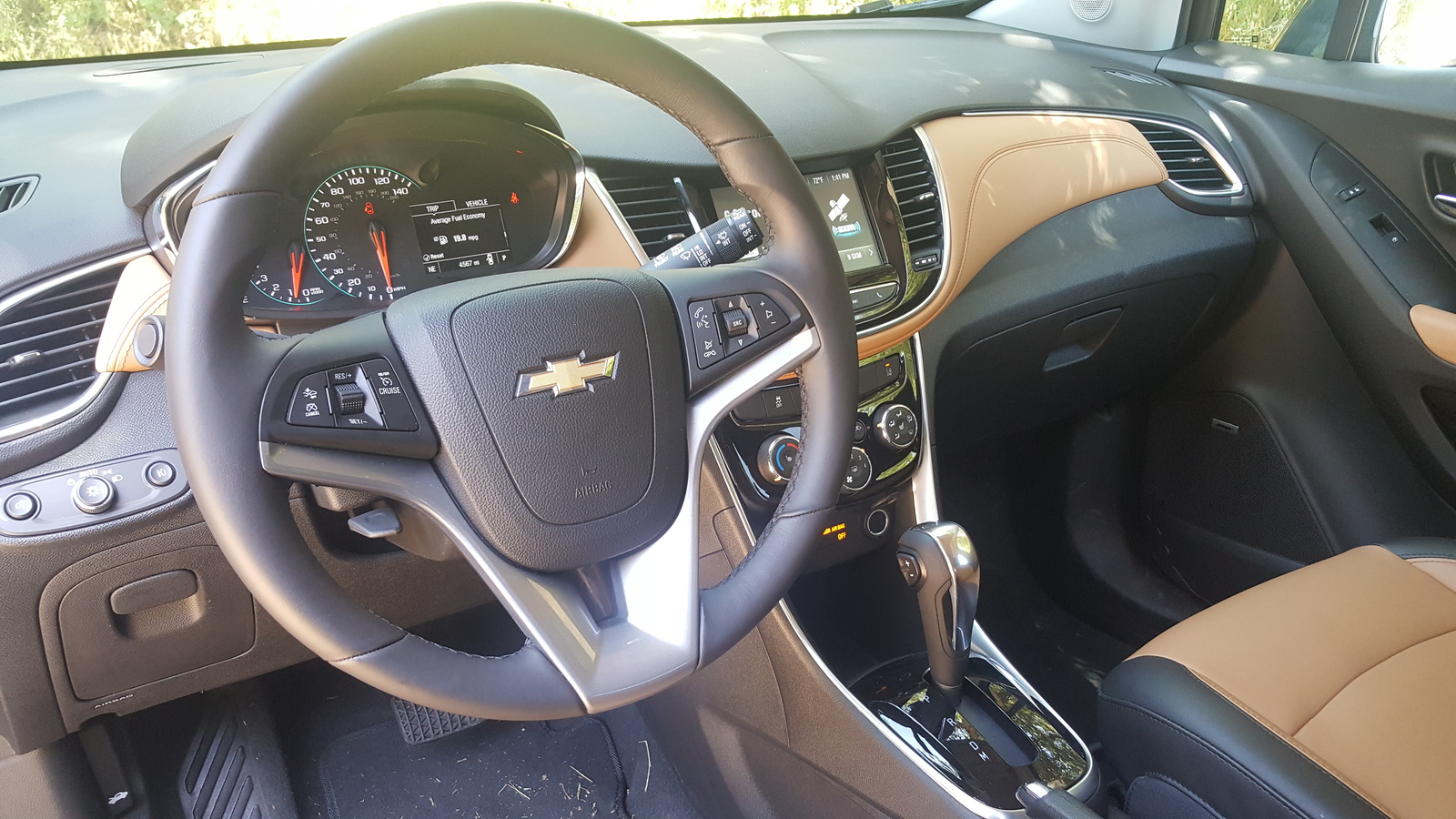 For a slightly subtle redesign, there are actually quite a few changes to be spotted on the 2017 Trax. A new front fascia brings the car more in line with other small Chevy offerings, with a larger hexagonal grille and thinner headlights—reflectors in the base trim and projectors everywhere else. Complemented by a new hood, the entire front end comes out flatter and less weighty, visually. Out back, the immediate change you’ll notice is less plastic cladding down low, but redesigned taillights are LEDs in the top-tier Premier trim, which replaces the old LTZ version.

Inside, the changes are more dramatic, with Chevy tossing out the old squared-off cluster and the aero-inspired vents that frankly didn’t mesh very well with the overall design. The new units actually look as though they were chosen with the Trax in mind rather than just snagged from a random parts bin. But this new design loses the storage bin that used to sit above the glove compartment, and with no center console, you’re left with doors and and an under-seat storage bin for the passenger with regard to interior storage. Go with the base LS trim and you'll even lose that under-seat storage.

While a “new” Premier trim (which is really just a name change from LTZ) gets you quite a few funky features, even the “base” LS trim comes with some impressive tech, like a standard 4G Wi-Fi hotspot, power lumbar adjust, and Chevy MyLink with a 7-inch touchscreen. If you choose front-wheel drive (FWD), you’ll get 16-inch steelies, but jumping up to all-wheel drive (AWD) gets you alloys. There are automatic headlights, a tilt and telescoping steering column, a rear-view camera, BlueTooth, and Apple CarPlay and Android Auto, all for $21,000.

The LT trim adds alloys regardless of drive configuration, as well as the projector headlights with LED running and tail lights, cruise control, remote start, heated mirrors, satellite radio, roof rails, upgraded cloth, a 110-volt outlet, and aesthetic upgrades for $22,900. However, this is where you can start adding packages to your Trax, like the Sun & Sound, which includes a 7-speaker Bose stereo and sunroof; the LT Convenience for keyless entry and ignition, a 6-way power driver's seat, leather-wrapped steering wheel, vinyl upholstery; and the Driver Confidence for blind-spot monitoring, rear cross traffic alert, and parking sensors.

My week was spent in the newly named, top-tier Premier trim, which adds 18-inch alloys, an auto-dimming rear-view, full vinyl upholstery and heated seats up front, although it omits the sunroof, frustratingly. Base price on the Premier is $26,100, but you’re going to want to pay the extra $900 to put that sunroof back. Additionally, the Premier trim makes available the Driver Confidence II package for forward-collision warning and lane-departure warning. If you want AWD instead of FWD, you're looking at another $1,500 on your bill. 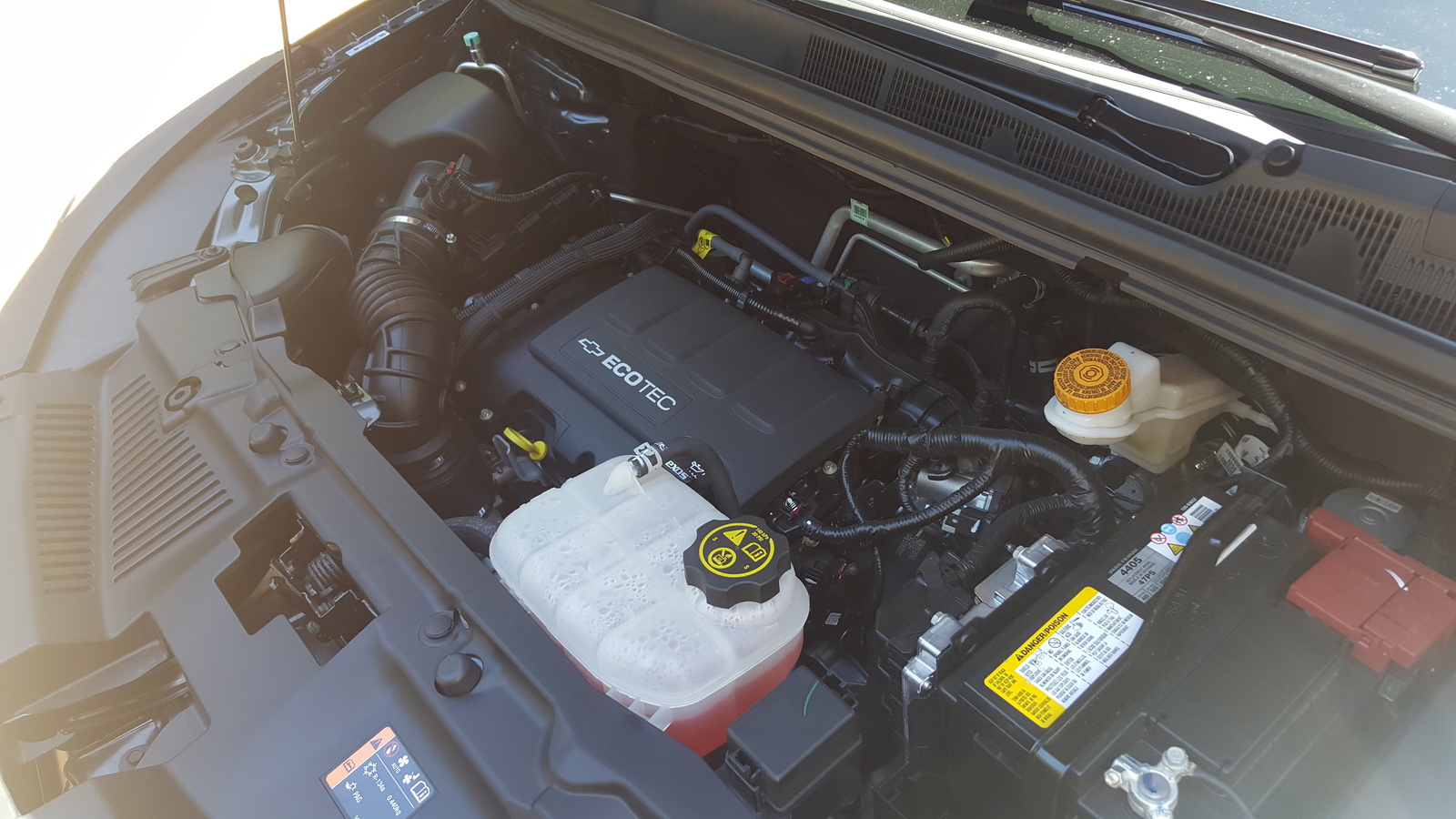 Every Trax is powered by a turbocharged, 1.4-liter 4-cylinder engine generating 148 lb-ft of torque at 1,850 rpm and 138 hp at 4,900 rpm, meaning you’re going to have to rev a lot to get this little 3,300-pound crossover moving, especially with a full load of passengers. Zero-to-60 times are average for the segment at around 9 seconds for a FWD Trax, but the issue comes when trying to accelerate for highway passing or hill climbing, when the 1.4-liter engine feels and sounds strained. The 6-speed transmission tries hard to be as productive as possible with the power it’s given, but when put to normal daily use, it struggles to deliver the stated 25 mpg city and 33 highway. Rated at 28 mpg combined, I was barely able to keep the Trax above 20 mpg over my week of mixed driving, although I do have a slightly heavy foot around the very hilly Bay-Area roads.

The suspension leaves a lot to be desired as well, and combined with very light and vague steering, you can get into a little trouble on a choppy highway or in a faster turn. The LS and LT do better with the smaller, 16-inch wheels, but the 18-inchers on the Premier transmit a lot of bad noise through the wheel, and bumps on the highway will have you bouncing around in your seat and your lane, necessitating constant small corrections. For this reason alone, the LT seems the best option of the three available trims, though it’s a shame to lose the auto-dimming rear-view and heated seats, not to mention the Driver Confidence II package.

Front disc and rear drums in FWD models will bring the Trax to a halt from 60 mph in around 123 feet, with the AWD trims’ rear discs managing to bring that closer to 120. This is average for the class, but any 3,300-pound vehicle should be able to do much better, and it’s time we start demanding this from the class as a whole. 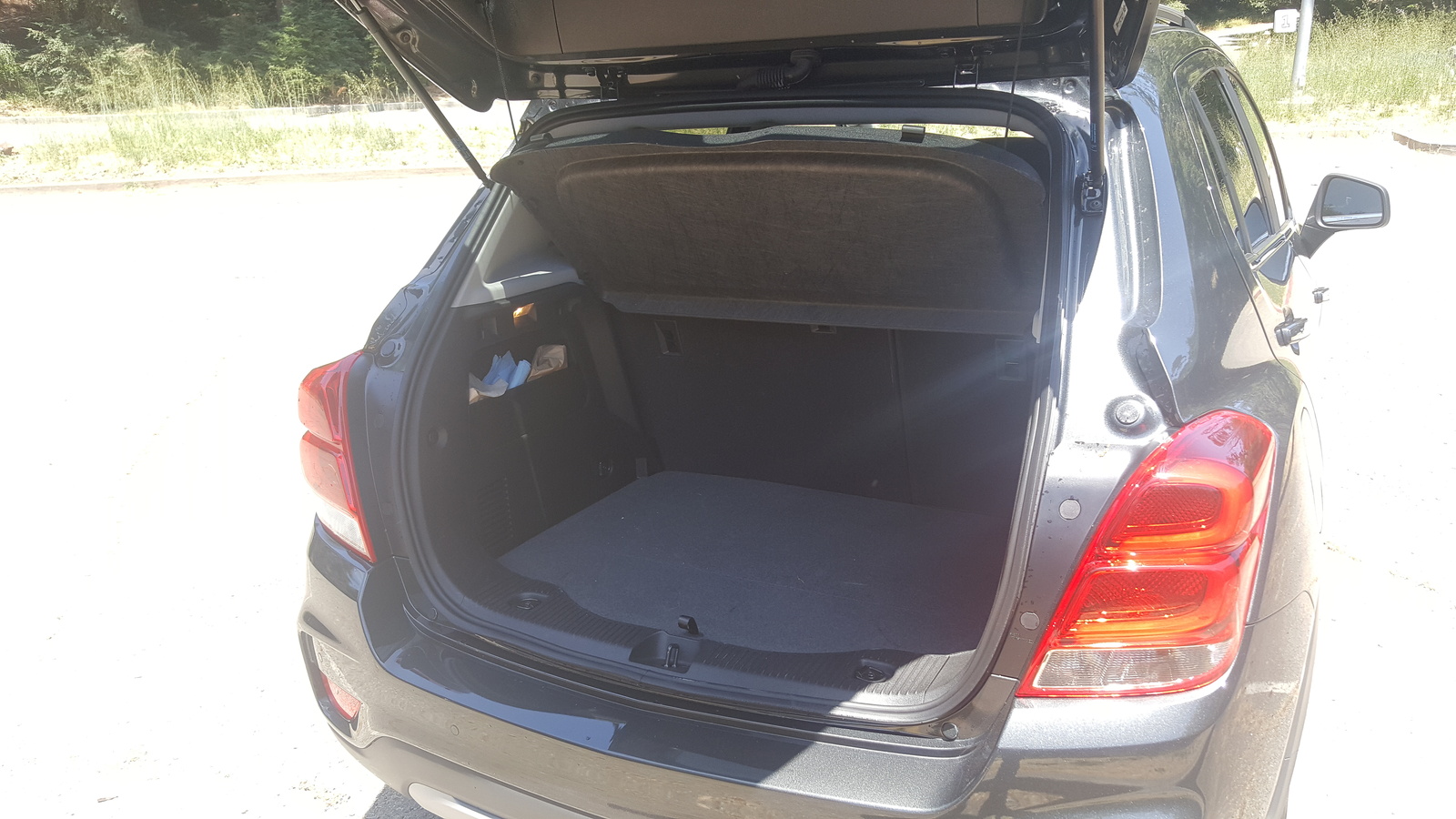 Space up front is plentiful with regard to head- and legroom, even for someone well over 6 feet, like I am. However, I found myself snugged up too closely to the B-pillar while driving. Over longer distances it really started to bother me as it rubbed against my shoulder and prevented me from comfortably resting my arm on the door or the ledge of the open window. Similarly, the seats were too narrow and shallow for true comfort, especially during spirited driving or extended bouts in traffic. Someone slightly smaller in stature would undoubtedly not find this an issue at all.

In the same respect, the back seats can be a very comfortable affair for anyone under 6 feet, but anyone taller will find things quite cramped. Likewise, the 18.7 cubic feet of space you’ll find in the rear won’t impress anyone, as it’s bested by nearly all competitors save the Mazda CX-3. Folding the seats will raise that to 48.4 cubes, thankfully with a flat loading area, though this still isn’t class leading. This should really be an issue only if cargo capacity is your ultimate concern, but be aware there are options out there with more space.

The best parts of the Trax are its light steering and short wheelbase, making parking and city exploration a breeze. The Trax has some of the lightest low-speed steering I’ve experienced, meaning even the weakest driver will be able to operate it with ease. But as I said, this also has a negative effect as speeds increase.

The biggest disappointment here is the hard plastic that absolutely dominates the interior. It immediately places the Trax at a significant visual and tactile disadvantage against the rest of the segment and will certainly stand in the way of Chevy poaching any consumers away from more stylish competitors like the Fiat 500X and Honda HR-V. I had hoped this update would address these issues, but I’m sad to say I was disappointed. 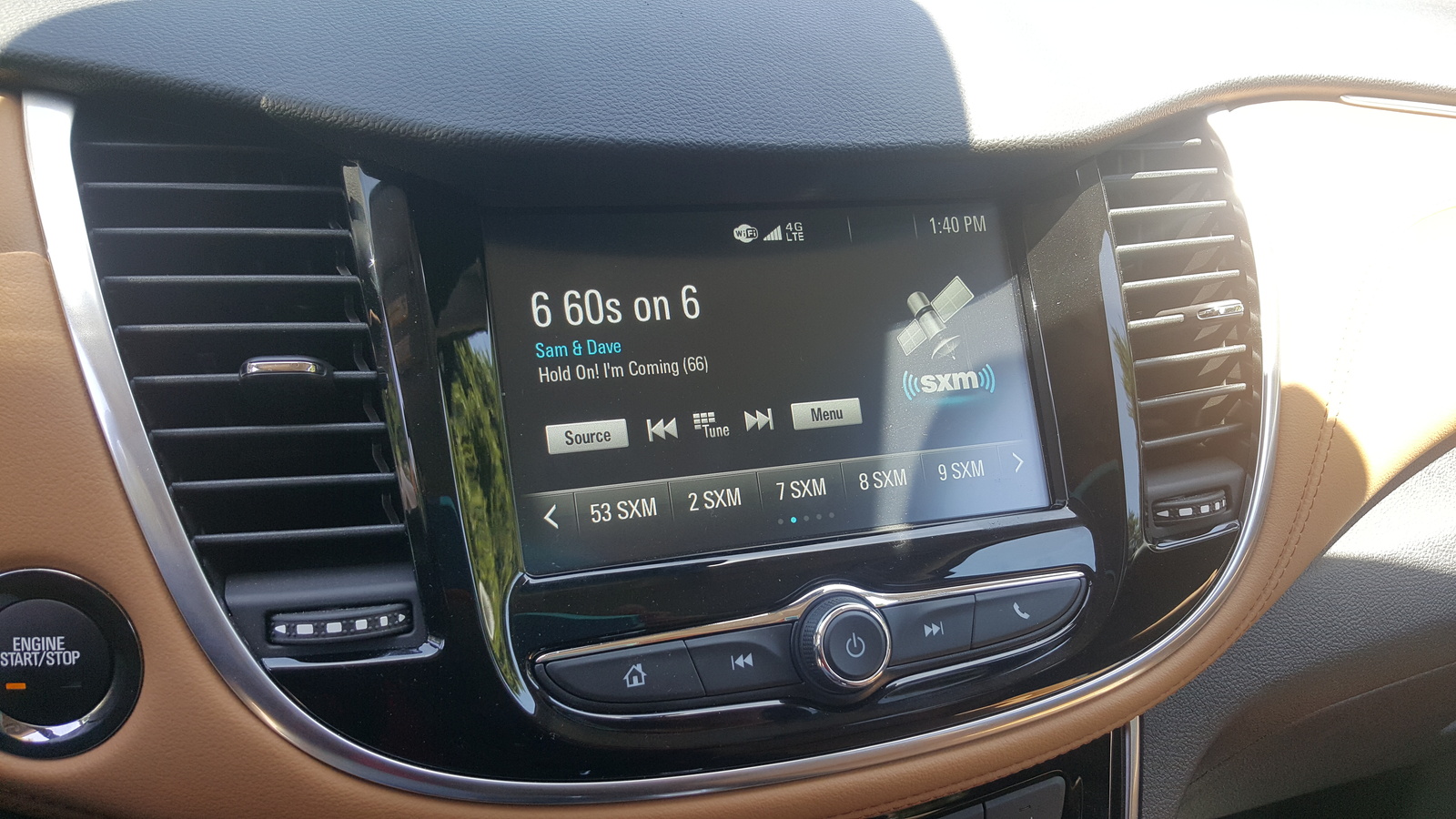 Tech has definitely improved for 2017 with the addition of an extra standard USB port as well as the inclusion of Apple CarPlay and Android Auto with every Trax trim. The latter is especially important, as other than OnStar there’s no available navigation system for the Trax.

Chevy’s MyLink system operates as well as you’d expect at this price level, though I was unable to connect one of the three phones I tested to the Android Auto system. Check compatibility there before you purchase.

The upgraded, 7-speaker Bose stereo handles tune duty nicely, but the standard system can get overwhelmed when cruising with the windows open. At higher volumes it sounds buzzy and tinny, but the Bose exhibits none of this. For this reason alone, the LT with the Sun and Sound package seems to be where you should start. 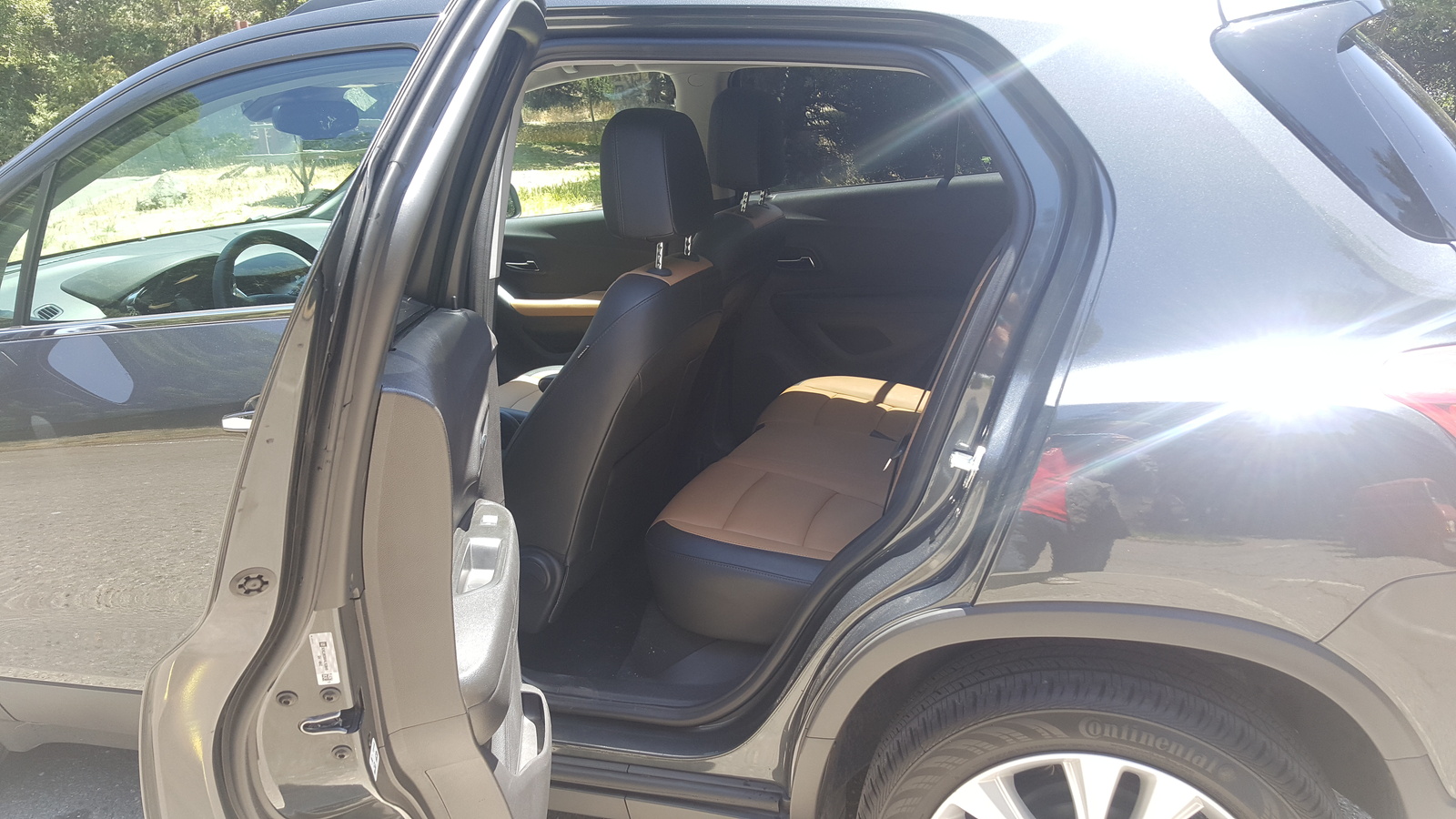 If you’re comfortable paying close to 30 grand for a Trax, you can have a not-unimpressive suite of safety systems—including blind-spot monitoring with rear cross-traffic and lane-departure warning, rear parking sensors, and a forward-collision warning system. However, the LS has none of these and can’t be outfitted with them even if you’re willing to pay. The LT can get everything but the forward-collision and lane-departure warning systems, and even in the Premier you’ll have to pay extra for those.

As mentioned previously, the Trax's 120-foot-ish stopping distance is average for the class, but disappointing when vehicles weighing more than 1,000 pounds more can do the same. Every Trax comes with front, front-seat side, front and rear side-curtain, and knee airbags for front-seat occupants, and has been awarded top marks from both the government’s National Highway Traffic Safety Administration (NHTSA) and the independent Insurance Institute for Highway Safety (IIHS). 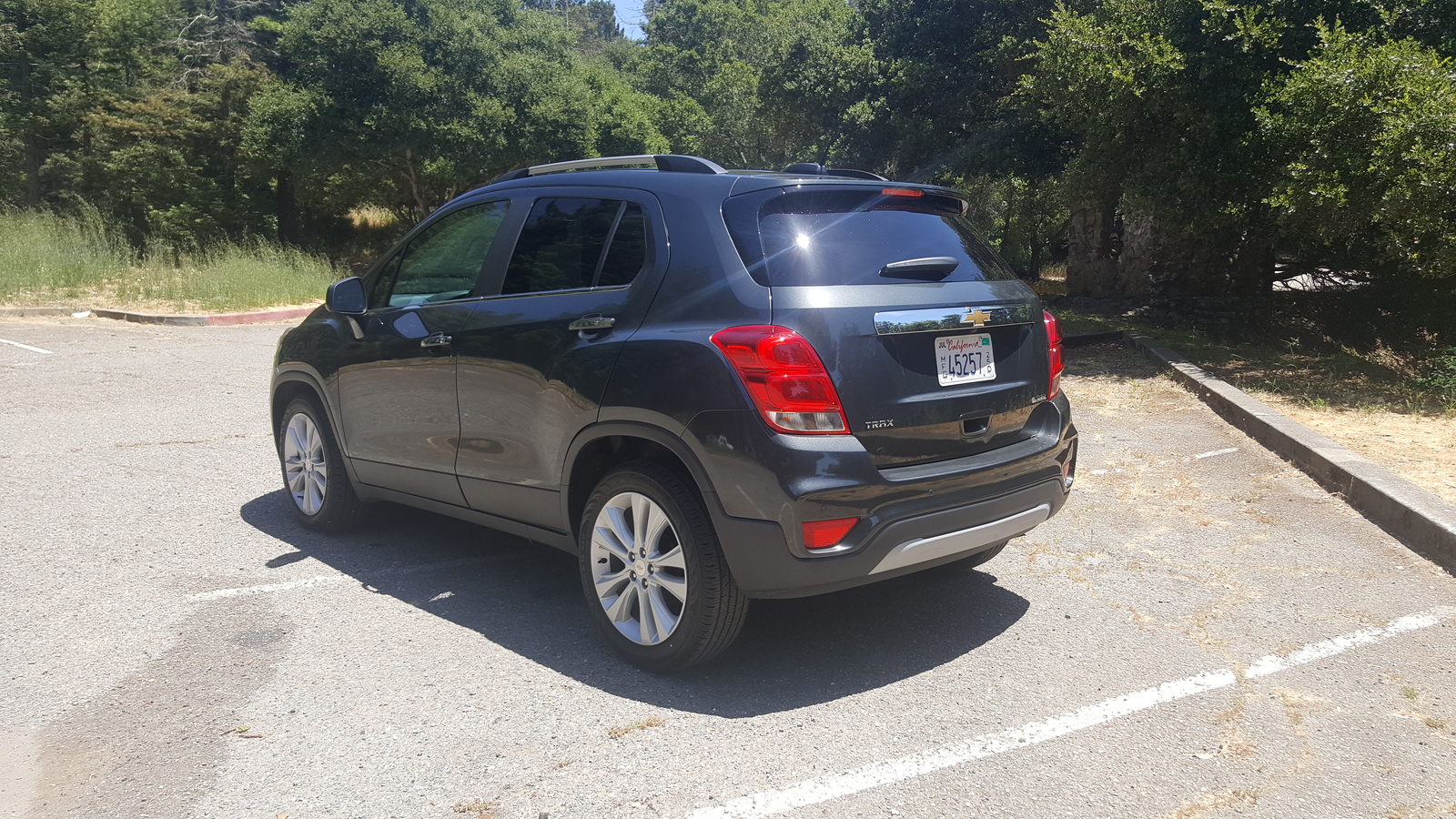 When it comes to cost effectiveness, it’s hard to recommend the Trax. Competitors offer more powerful and more efficient engines, a better ride, more interior storage space and cargo capacity, and more upscale materials—usually for a lower price. The 2017 updates certainly help the argument and bring the Trax into a more competitive space, but even with a current $2,000 cash-back incentive, this simply pulls the Trax up to about even with the rest of the segment. Numbers certainly aren’t everything, but for now I’d make sure to check out the competition before pulling the trigger on the Trax.

What's your take on the 2017 Chevrolet Trax?

TheHorror GuruDL1MX Is a moron with no standards. Fuck him for encouraging Chevy build such garbage.

Users ranked 2017 Chevrolet Trax against other cars which they drove/owned. Each ranking was based on 9 categories. Here is the summary of top rankings.

Have you driven a 2017 Chevrolet Trax?
Rank This Car

Seat Warmer On A Trax?

I have a 2017 Chevrolet Trax with no front heated seats wondering if it can be an add on to have is installed?