A new hatchback style attempts to woo some new buyers away from the cult of the crossover in the newly redesigned Chevrolet Cruze. 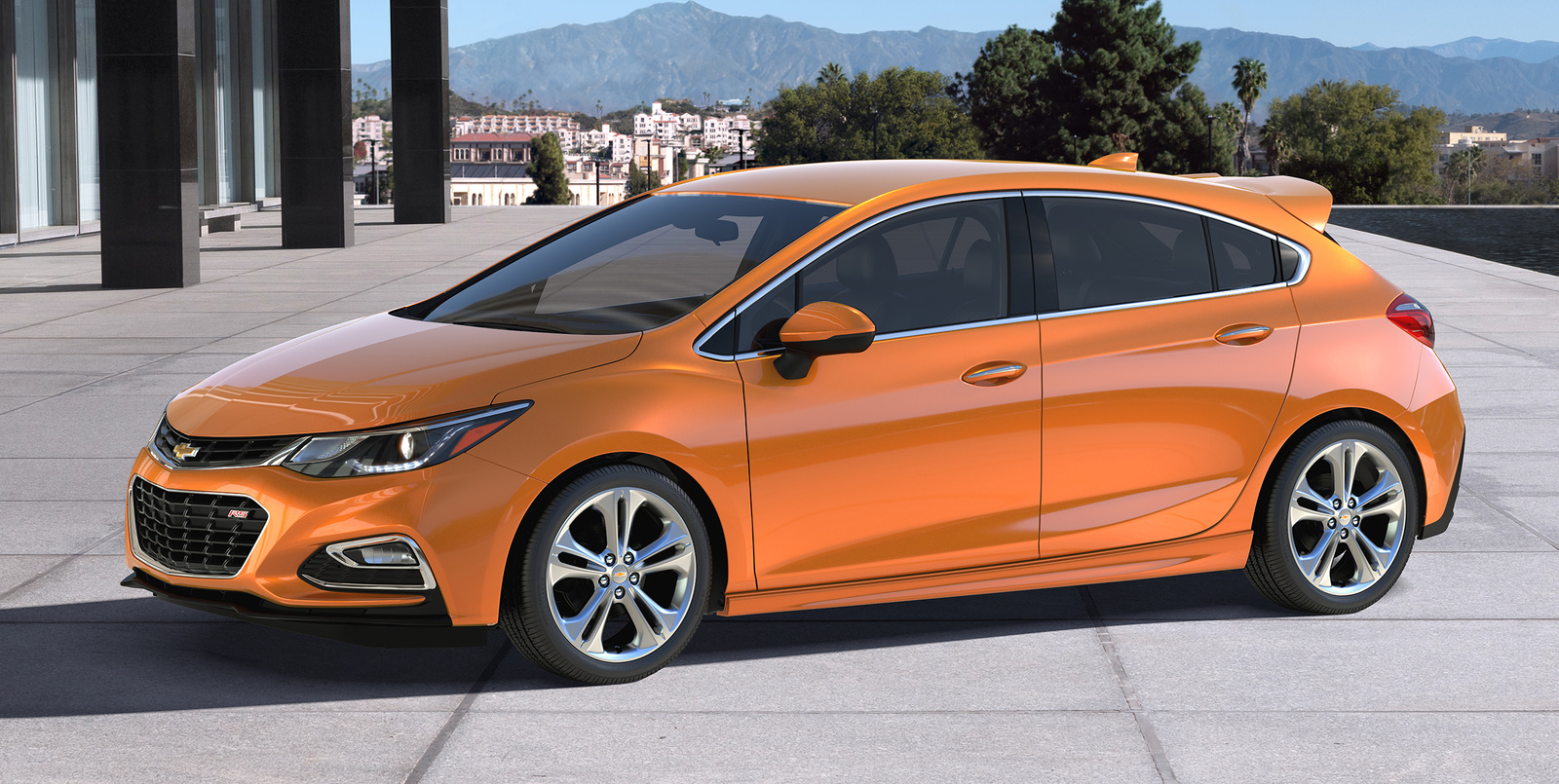 Even after a full redesign last year for the Cruze, Chevy felt like there was still something missing. To add some utility to its compact sedan, a sloping rear hatch was added to let it try and compete with segment stalwarts like the Mazda3 and the Honda Civic. For extra competitive advantage, all Cruze trims now come with Chevy’s Teen Driver mode as well. 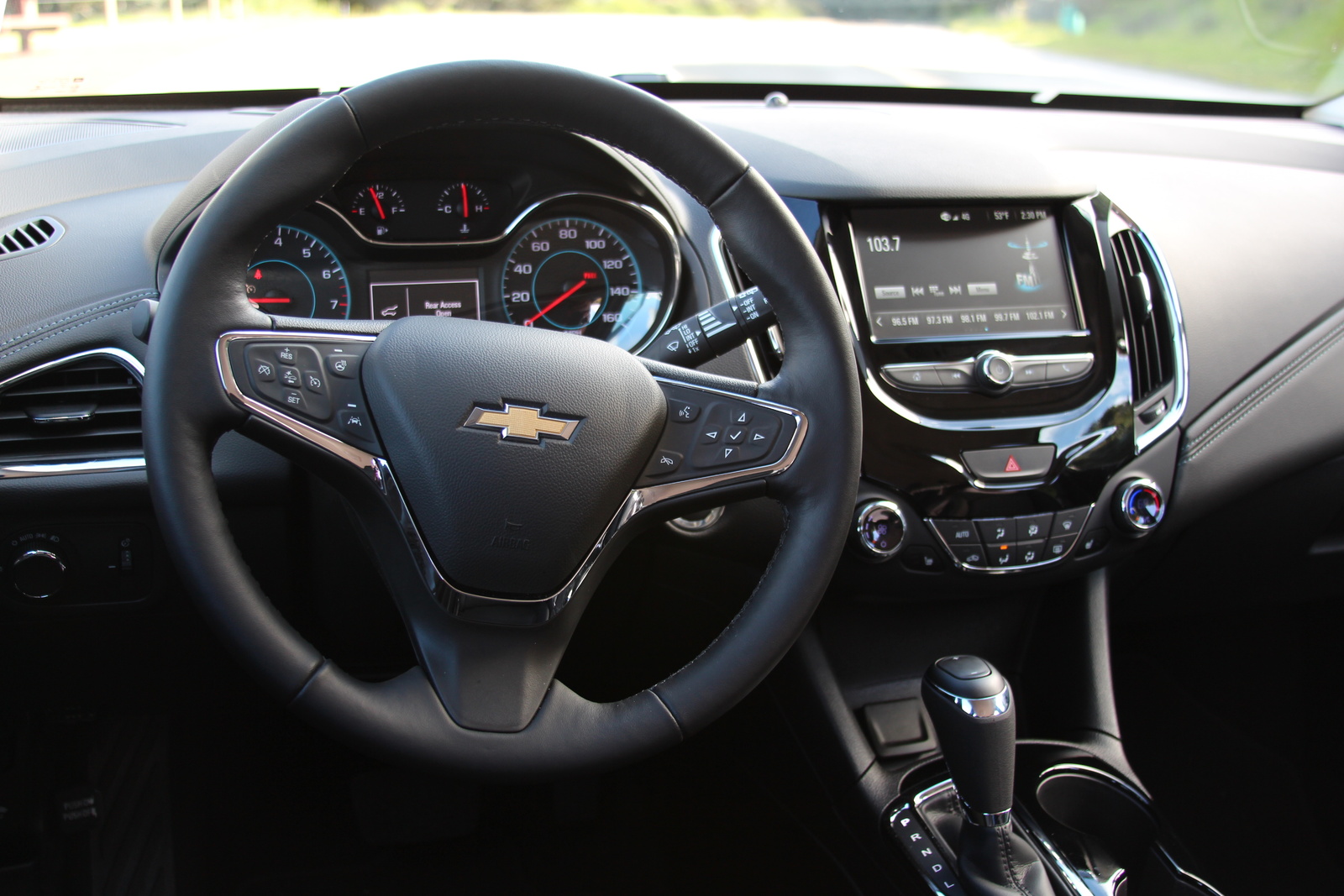 For the Cruze hatchback, Chevy has dropped the base L and LS trims, meaning you can get the Cruze hatch only in LT and Premier trims. This is good news on one hand, as the lower-level L and LS trims omit some pretty basic features, like cruise control, but it’s bad news for anyone hoping to spend less than 20 grand on their compact. While you can get into a Cruise sedan in L trim for around $18,000 (with destination), the hatchback starts at just over $22,000.

That’ll get you into an LT, which is probably about where you’d want to start anyway, because the L and LS trims for the sedan are a trip back in time, with steel wheels, a manual transmission, 4-speaker stereo, and no cruise. Were it not for the touchscreen and reversing camera, it’d feel a lot like the late '90s. The LT steps up with 16-inch alloys, a 6-speaker stereo with satellite radio, LED running lights, and heated mirrors, plus phone and audio controls on the steering wheel. But at this base price, you’re still working with a 6-speed manual transmission. To avoid having to row your own, the automatic will jump the price to $22,795. A Convenience Package ($1,150) adds 8-way power for the driver’s seat and heat for both front seats, keyless entry and ignition, and remote engine start if you have the automatic. A Sun and Sound Package ($1,495) gets you a 9-speaker Bose stereo, upgraded color driver’s info center, ambient lighting, visor lights, and a power sunroof.

The Premier trim comes with the Convenience Package standard and starts at $24,820 for the automatic—the only transmission option. Wheels jump up one notch to 17 inches, and you’ll get extras inside like the ambient and visor-mirror lighting from the Sun and Sound Package, leather, heated steering wheel, and height adjustment for the front passenger seat. Outside you’ll find extra chrome exterior accents, and underneath, a Watt's linkage for the rear suspension.

The LT can be fitted with a Driver Confidence Package ($495) to add blind-spot monitoring with rear cross-traffic, plus rear parking sensors. However, with the Premier you’ll have to add the Driver Confidence II Package ($790) as well for forward-collision warning, lane-departure warning and intervention, plus auto high beams.

My week with the Cruze hatchback was spent in a Premier with the Driver Confidence Package and the Enhanced Convenience Package. With an $875 destination charge, the total drive-away price came to $26,475. 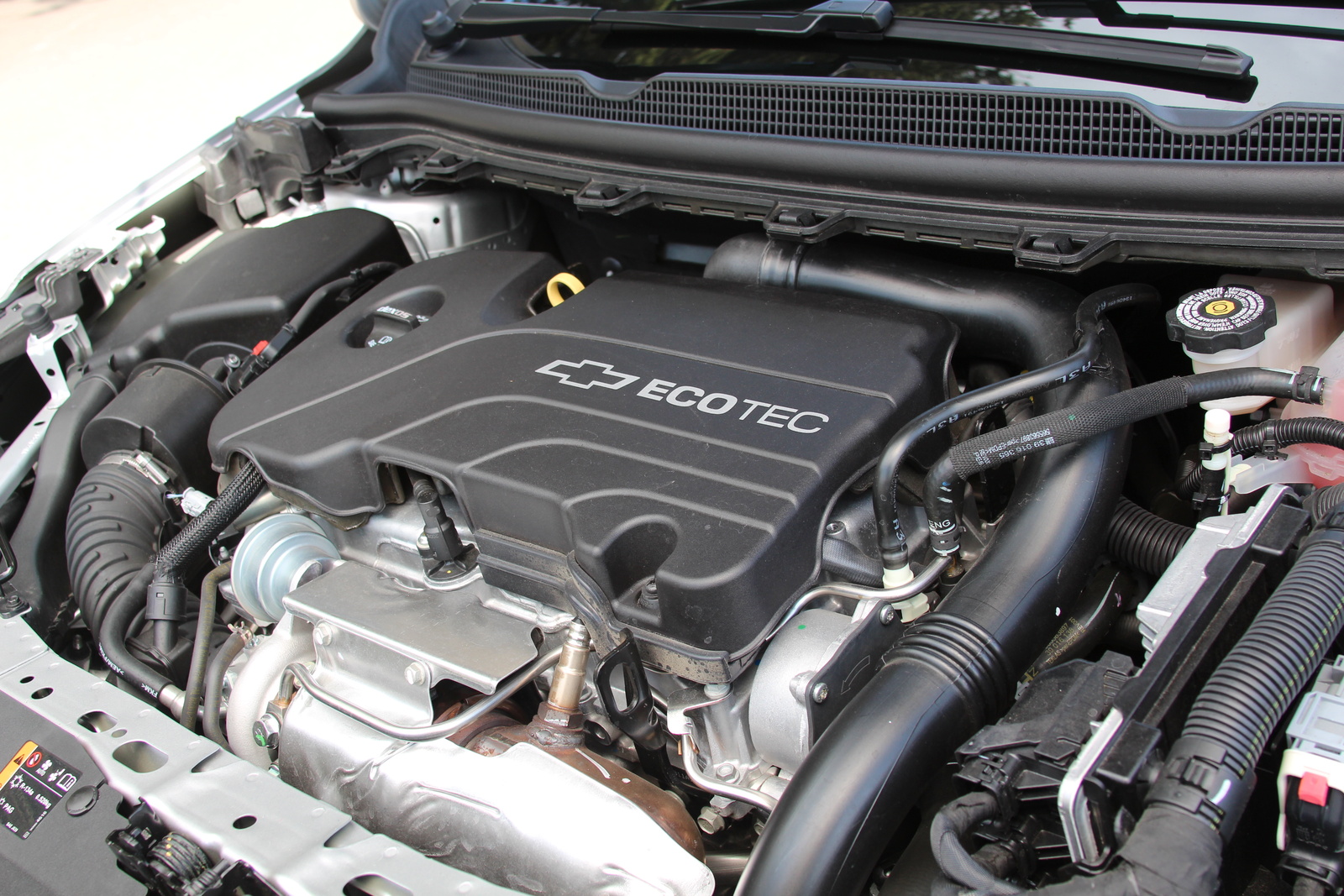 I hate to start a review on a bad note, but there’s not a lot of great things to say about the turbocharged 1.4-liter engine in the Cruze. With 153 hp and 177 lb-ft of torque that come on at just after 2,000 rpm, things sound great on paper. You don’t need much more than that to motivate a 2,900-pound car, and with power coming on so low, you don't need to spin the engine up to redline before you get any power.

Sadly, the power available down low is good for stop-and-go traffic, but it’s not nearly enough for climbing hills or highway merging and passing. What this adds up to is a 0-60 time that has tested numbers of anywhere from 8 to 9.6 seconds. That means you’ll end up several seconds behind the competition, and that’s not even including the performance variants that competitors offer, like the Golf GTI and the Focus RS.

For anything other than leisurely driving, you’ll be forced to floor it, and besides the engine making a lot of noise, there’s not much more to be gained up near redline—besides destroying your fuel economy. With the automatic, the Cruze hatchback is rated at 31 mpg combined—28 in the city and 37 on the highway, numbers that would make the Cruze quite competitive. But I’ve been unable to get anywhere near those figures, and my week of mixed driving resulted in 22 mpg average. This is especially disappointing considering my tests of competitors like the Golf and the Focus resulted in numbers quite close to advertised averages. The manual is supposed to offer a slight 1-mpg advantage, so if you’re able to deal with 3 pedals, it’s worth checking out.

The Premier’s Watt’s linkage for the rear suspension helps create an agile feel for this hatch. It doesn’t have the performance chops of the Golf/Focus/Mazda3, but it’s nowhere near a dead ride, either. If you like to have a little fun with your ride, there’s some to be had here. 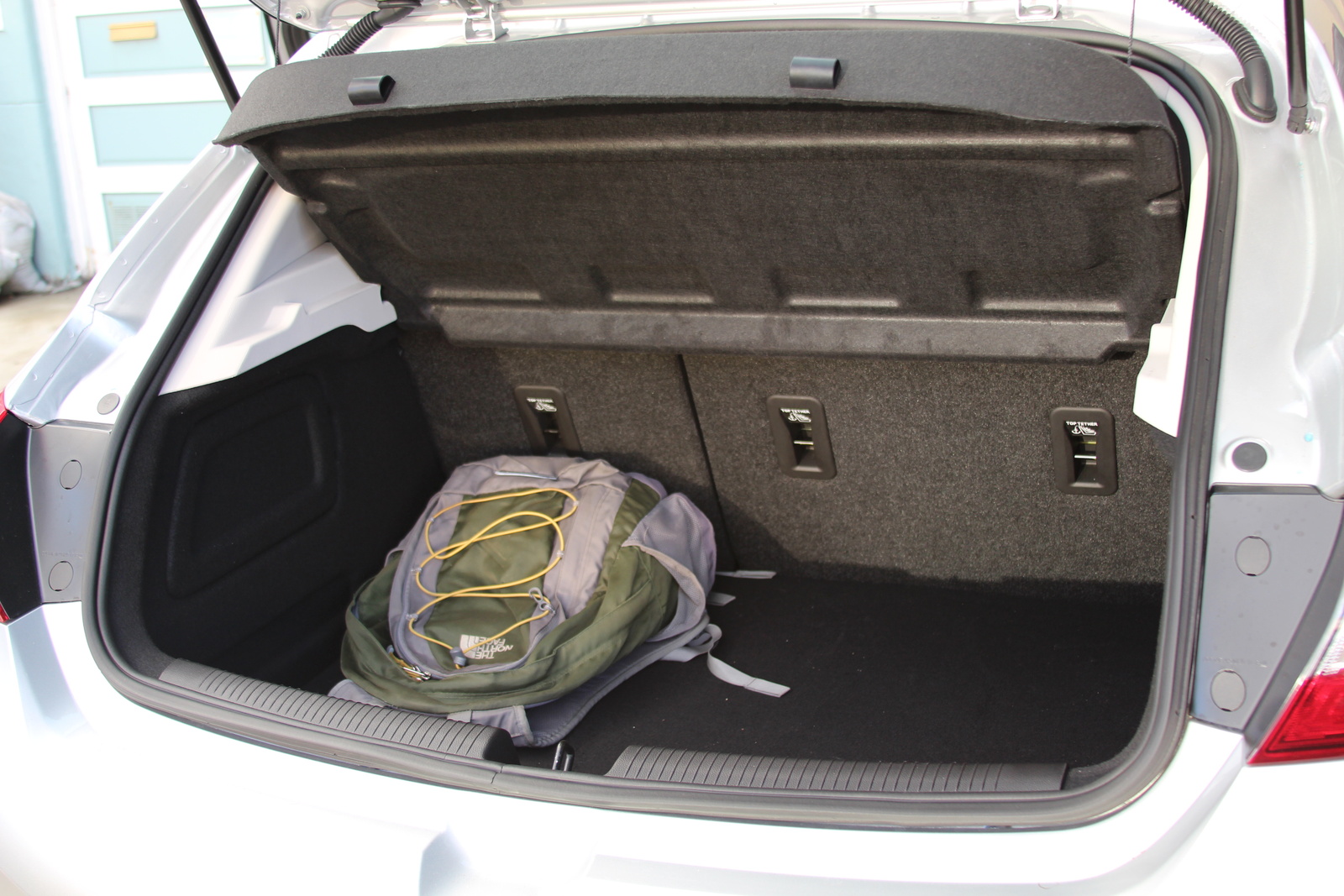 Besides offering a quality car for an attractively low price, the Cruze hatchback’s major selling point is the space inside. It has 22.7 cubic feet waiting for you in the trunk, and if you fold down the rear seats, that’ll jump to 47.2. That puts the Cruze right in the middle of the competitive pack, with the class leader Golf offering 53 total. However, I’d suggest you check out several of the options in person, as calculated space and useable space are two very different things. A high bumper, tight sides in the trunk, and aggressively sloped rear glass mean it can be difficult to fit anything high or wide back there, with the extra difficulty of having to lift it up over the bumper. Take a look and you’ll see what I mean.

One of the drawbacks a hatchback can present is additional noise from having an essentially open rear space. Chevy combated this by adding additional sound deadening material in the rear, and with the smaller 16-inch wheels of the LT, the Cruze is actually a surprisingly quiet ride.

Space for people is abundant at least, and I was able to live quite comfortably at 6-foot, 4-inches in the front and could even get into the back if need be—as long as someone similarly lanky wasn’t occupying the seat directly in front of me. In the Premier, there was plenty of padded material to distract from the hard plastics, and the overall design of the interior follows the swooping, fancy footsteps of the Focus, rather than the more understated Golf. 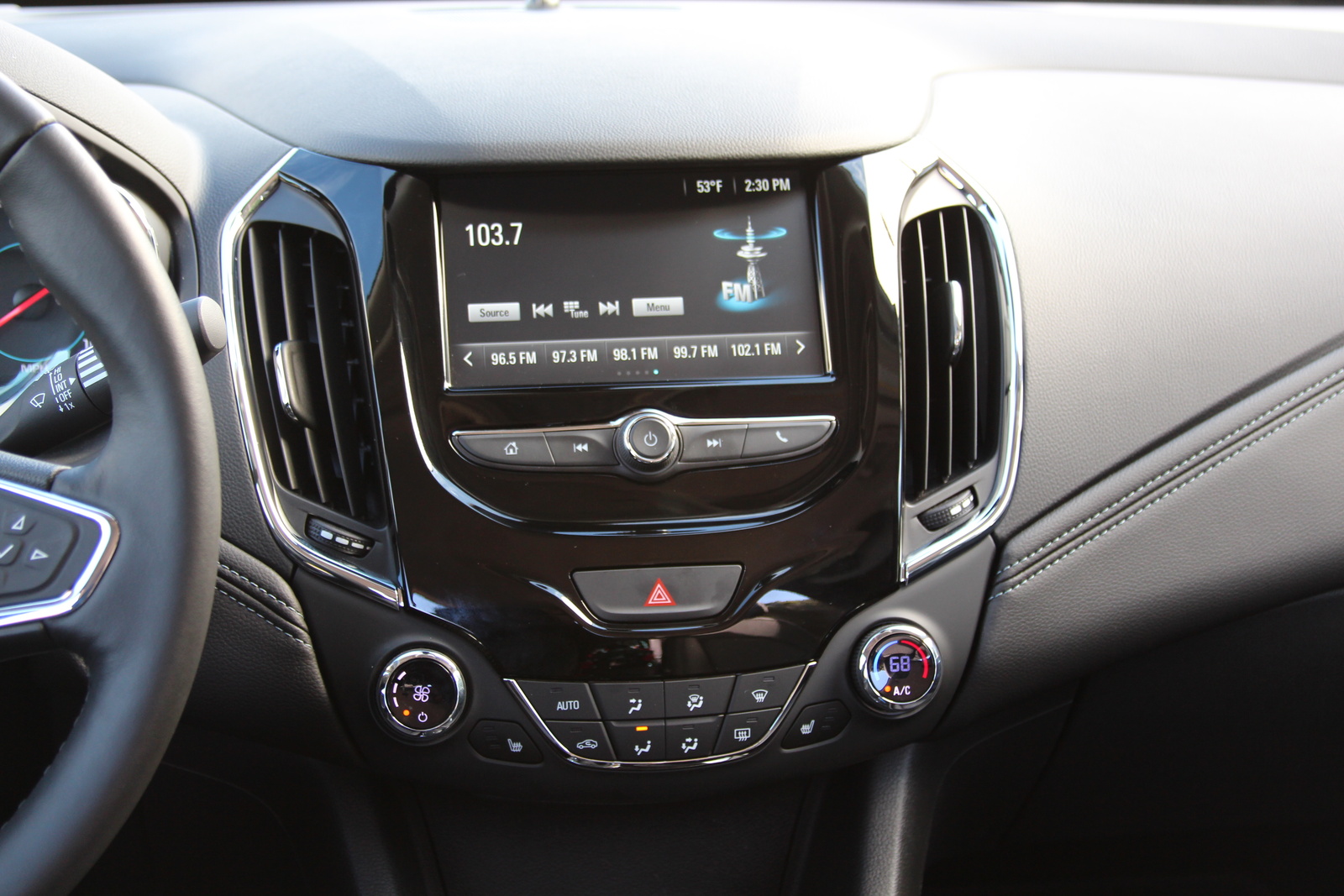 Standard Chevy MyLink on an 8-inch touchscreen with Apple CarPlay and Android Auto mean you don’t have to pony up for the Premier in order to get full functionality. But if you prefer onboard navigation rather than through your phone, that’ll mean buying the Premier and paying the extra two grand for the Sun and Sound with Navigation package.

Wireless charging is nice, but as seems to be standard among the manufacturers trying it out, Chevrolet's slot in the Cruze isn't large enough to fit the bigger phones that usually offer it. I’m still working with a Galaxy Note5, and I had to remove the rubber housing from the wireless charging slot in order to get my phone to sit low enough to activate, and without the rubber housing, that meant my phone slammed back and forth in the slot as I drove.

For 2017, every Cruze now comes standard with Teen Driver, letting you set limits for speed and distance for a secondary driver - presumably a teen, but this works just as well for valets or your irresponsible brother-in-law. You’ll get an app-delivered report and notifications whenever limits are exceeded.

My one complaint here is with the engine's standard start/stop system. This is a feature that cannot be disabled in the Cruze, and it’s not an invisible system by any means. The engine shutting off or turning back on comes with a lot of noise and vibration, and the delay between lifting my foot off the brake and the engine starting got noticeably longer just in my week with the Cruze. 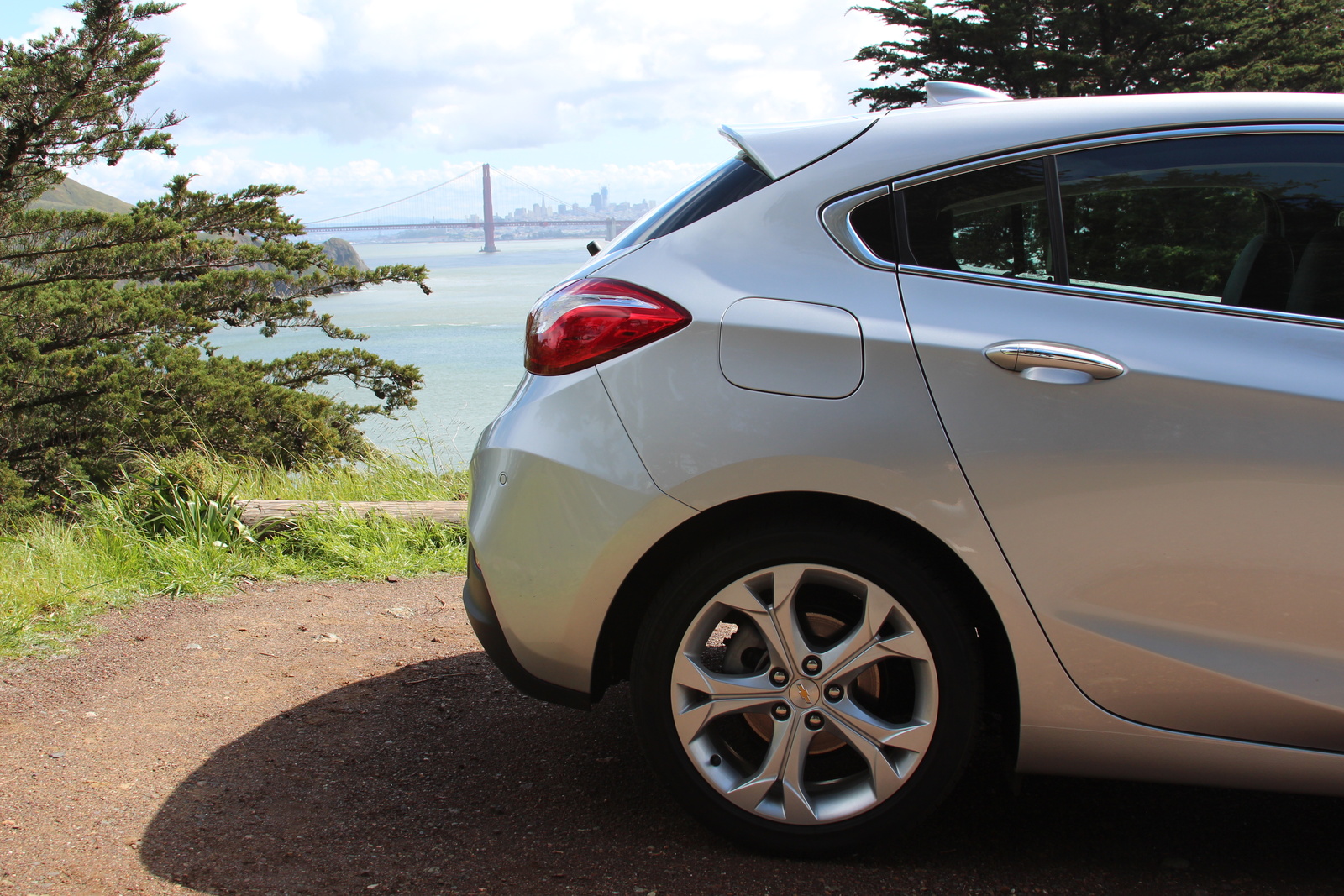 There are a lot of good things to say here. From surprises like full-length side curtain, knee, and front and rear side airbags to an impressive stopping distance from 60 mph of just 110 feet, the Cruze delivers on safety. However, the Cruze recently lost its 5-star rating from the government’s National Highway Traffic Safety Administration (NHTSA), with 4-star scores in all tests barring a 5-star score in the frontal crash test. The independent Insurance Institute for Highway Safety (IIHS) has offered test results only for Moderate Overlap Front and Side Impact tests, for which the Cruze earned the top rating of Good in each. But 2015 Cruze models and earlier have received the second lowest rating of Marginal in the Small Overlap front test, a test that neither the 2016 nor 2017 Cruze has undergone. 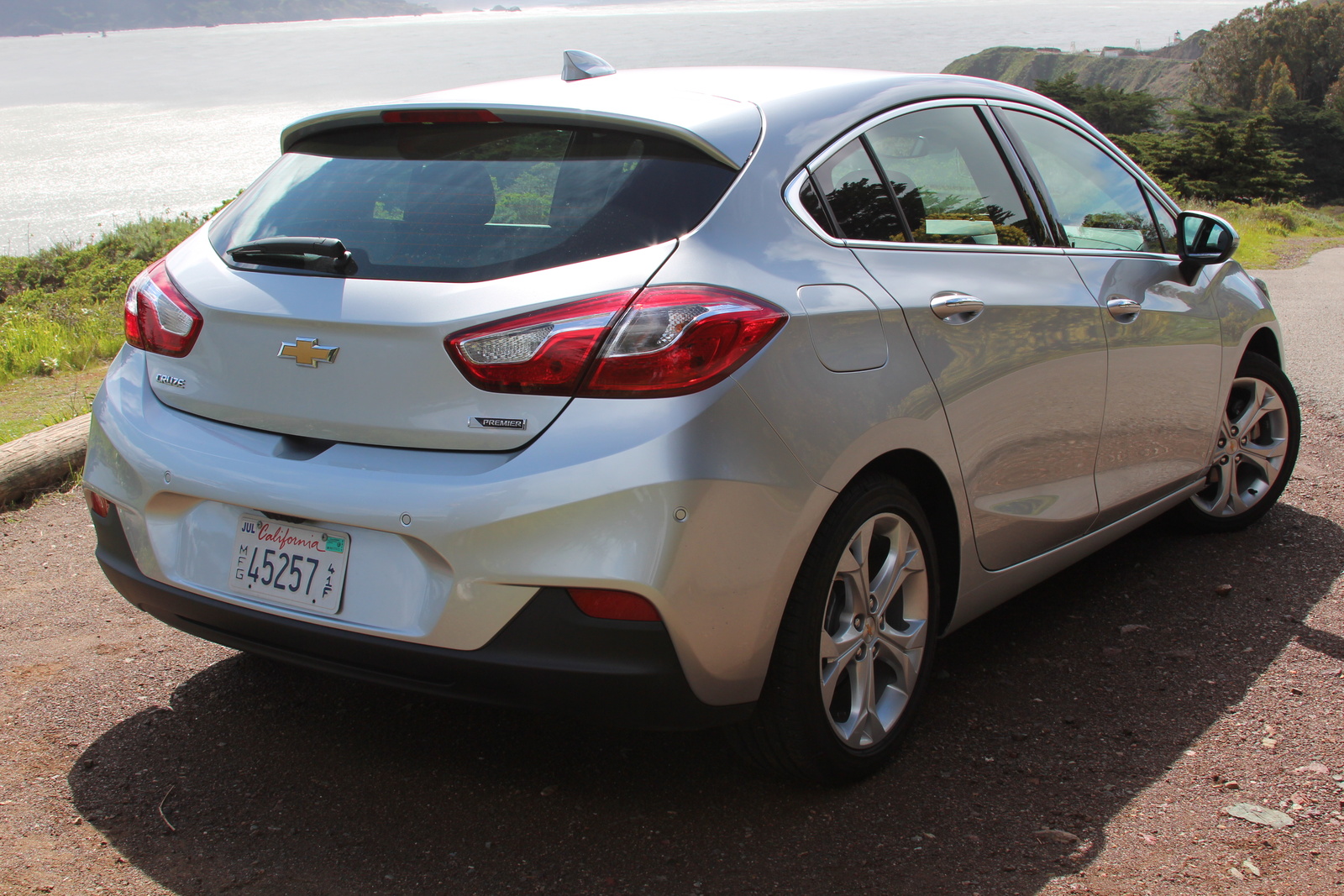 It all comes down to the numbers. For the LT’s $22,000 price, you could get into a Civic EX, Golf Wolfsburg, or Focus SEL, and if you jump up to the Premier trim’s almost-$25,000 tag, and you’re into GTI range. That’s some stiff competition, especially when that competition offers more room, more power, better fuel economy, etc. If you start adding packages and options, you can easily get the price of the Cruze near $30,000, and that’s a difficult price to justify. With a turbodiesel and new 9-speed transmission slated for 2018, this may be a good time to hold off a bit on the Cruze.

What's your take on the 2017 Chevrolet Cruze?

TheHorror Wow, Mike! Have fashion trends cycled pack around to the early nineties?

John Well I drive a 2011 Cruze LTZ and pretty much it looks as though the 2017 is a nice featured car, but options add up and depreciation is steep. After all its still a small car and a weak 1.4 turbo with a sleepy auto trans. I won't buy another even though the 2017 is a bit nicer than the 2011. The engine ruins it for me, its fine on flat ground but the millage doesn't live up to the expectations and the competitions offers better alternatives.

TheHorror Why'd you buy it then, John? You should have been able to judge the powertrain's character on even a short test drive.

Users ranked 2017 Chevrolet Cruze against other cars which they drove/owned. Each ranking was based on 9 categories. Here is the summary of top rankings.

Have you driven a 2017 Chevrolet Cruze?
Rank This Car

How Do I Add CPO Information In The Listing?

Hi, I have a 2017 Chevy Cruze with 65k miles and today I got a message on the dashboard “engine power is reduced” and the check engine light is on. Car runs fine and doesn’t idle, but once you ste...

On my way home yesterday all of a sudden my 2017 Chevy Cruze started to lose power and the Stabilitrak and engine light came on...lost power and the car shakes when driving...what is wrong? Is it an...

I have a 2017 Chevy Cruze Lt. My check engine light had came on and off for a few months with a code reading for bad upstream O2 sensor. My car still drove fine. I finally had the upstream O2 sens...

498 views with 4 answers (last answer about a year ago)