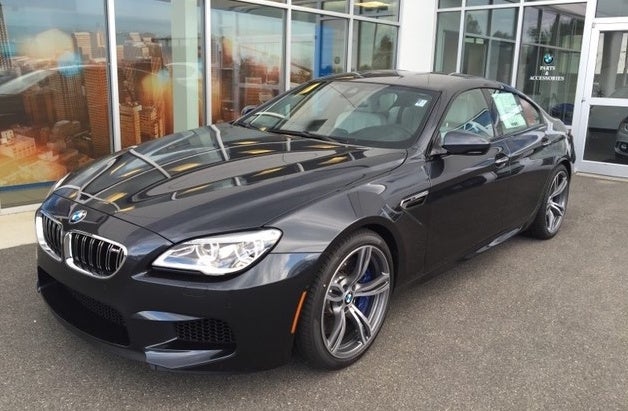 Unlike some of BMW’s other M cars, the M6 has been built and sold rather sporadically. The first M6, sold here from 1983-89, actually predated the first E30 M3 and was one of the more memorable large, fast coupes of the 1980s. Then came a long absence, until the model was reintroduced in 2005 and sold until 2010, only to be reintroduced again in 2012 for its third (and current) generation. The 2017 BMW M6 is available in the same three body styles as the regular 6 Series, ranging in price from $113,700 for the regular coupe to $117,500 for the 4-door Gran Coupe and $120,000 for the convertible (because when the top goes down, the price goes up). The M6’s main competition is from other large, high-performance European GTs like the Aston Martin V8 Vantage GT or the Maserati Granturismo.

The cosmetic changes to the current M6 are minimal, with revisions to the M-specific front and rear fascias, a reworked interior, and recently added LED headlights. The Competition Package, which crams even more performance into the already potent vehicle, is visually distinguished by black-chrome tailpipes and 20-inch M-alloy wheels. BMW’s “Individual” range also allows buyers to use a little bit more imagination when configuring their M6, providing bespoke paint colors and additional interior combinations. The Individual service, however, comes at a hefty price.

While the M6 can be discerned from the regular 6 Series by its ample M badges, the real reason to buy this car is for the added performance. A hefty car, at over 4,200 pounds for the coupe and over 4,500 for the convertible, the M6 nevertheless has the power to make up for it. The twin-turbo 4.4-liter V8 makes 560 hp and over 500 lb-ft of torque in its normal tune, and those who opt for the Competition Package will get a full 600 horses breathing through a throatier sports exhaust.

In most configurations, the M6 will do 0-60 mph in around four seconds (the convertible takes 4.3 seconds), and its top speed is, as with many German cars, limited to 155 mph. A launch control system helps with starting off from a standstill and putting down all that power and torque. And for a gigantic car with a powerful forced-induction V8, fuel economy is not terrible, at 23 mpg highway (when equipped with a manual), though the M6 will of course need premium gas. Refreshingly, the standard transmission choice for the M6 remains a 6-speed manual (which is equipped with rev-matching for downshifts), even if most buyers will likely spring for the optional 7-speed dual-clutch automatic with paddle shifters.

While the M6 is really too big to be a good track car, it’s still a balanced automobile that will handle the twisty bits more effectively than, say, an equivalent AMG Mercedes, which is more focused on straight-line speed. The M6's carbon-fiber roof lowers its center of gravity, and it has M-specific stability, traction, and dynamics controls, a specially tuned suspension, and M-specific wheels and tires. The M6 is also available with Dynamic Damper Control, which features Comfort, Sport, and Sport+ driving modes, as well as the ability to save two suspension settings and activate them with buttons located on the steering wheel. Available carbon ceramic brakes save a significant amount of weight in addition to providing superior braking performance, particularly under heavy use. And in addition to the engine tuning, the Competition Package adds a re-tuned steering rack and tighter suspension.

Because it’s based on the 6 Series, it’s natural to expect the M6 to have a luxurious interior packed with amenities. It certainly doesn’t disappoint, in this respect, but an optional Executive Package adds even more, including a heated steering wheel, full LED lighting, and an M-specific head-up display that shows info like speed, what gear you’re in, and a digital tachometer with a shift light. Another tempting option is the 16-speaker Bang & Olufsen sound system.

One of the other available packages for the M6 is the Driver Assistance Plus package, which includes several safety features like lane-departure alert, forward-collision and pedestrian warnings, blind-spot monitors, and several camera views. Adaptive LED headlights are also available. The M6 is really for someone who wants a top-shelf, exclusive, high-performance GT that’s quick, comfortable, and brutally fast. A regular 6 Series is more than fast enough for most people, and there’s an M Sport version for people who want a little extra; the M6 is in a different league entirely. The largest genuine M car currently available, it’s also less lively than its M3 or M4 stablemates on a twisty country road or race course--but for a long trip on the highway, the M6 is one of the best ways to go.

TLX_3762 It's a bic razor of a sports car....the driver rules and when he or she is done with it...move on to another one...than another....once you drive it...you will never look back. The perfection and performance...and sound. Why would you ever consider any other car. Perfection.

Users ranked 2017 BMW M6 against other cars which they drove/owned. Each ranking was based on 9 categories. Here is the summary of top rankings.

Why Can I Not Use My Email

When initially trying to create a listing, the cargurus system tells me my email has been hacked. But, the notifications are still going to that email. So I am using an alternate email.