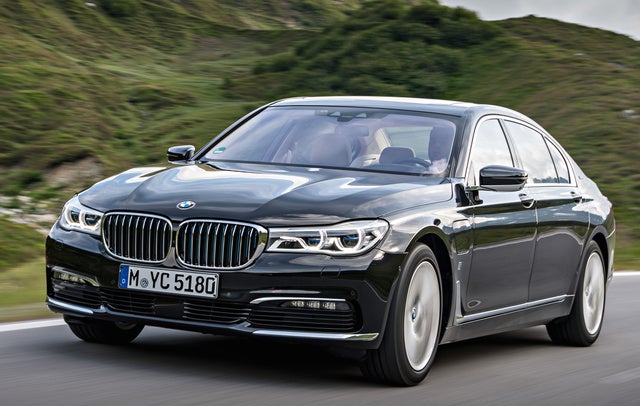 Average user score
4.6 ⁄ 5 stars
Based on 9 reviews
Review by GuruZGYJL — Had one before. Buying one again. Once you own it for a few years, you realize how good a car it is. Read more
Review by GuruMGWPG — Good description and explanation of equipment listed. These cars are so heavily equipped Read more
Review by Paprmkr — Best car ever. Luxury and sport Driving Love the outside style too Read more

After an extensive redesign last year, the returning trims in the 2017 BMW 7 Series lineup remain essentially the same. But that doesn’t mean there’s nothing new for this iconic flagship sedan. The 2017 lineup is now bejeweled with a luxurious plug-in hybrid, the 740e xDrive sedan.

The new hybrid looks, essentially, like the three other 7 Series trims - 740i, 750i, and 750i xDrive - which all retain the slightly revamped (and dashing as ever) shape of the 2016 model. The 740e does have some markings that distinguish it from other 7 Series trims and echo the markings found on BMW’s hybrid i3 and i8 models. There are blue “i” badges on the front fender and C pillars of the 740e and the LED headlights have blue-hued rings. There’s also a charging port behind the driver-side front wheel.

The interior of the 740e is identical to that of other 7 Series sedans, with one minor exception - the 12.3-inch digital gauge cluster contains a charging and percentage of power display that’s not necessary in the non-hybrid trims.

The big difference between the 740e and the other 7 Series sedans is found, of course, under the hood. The gasoline half of this hybrid powertrain is a 2.0-liter 4-cylinder that creates 258 hp and 295 lb-ft of torque, making it the most powerful 4-cylinder BMW has put in a series-produced vehicle. The electric half is a synchronous motor that generates 113 hp and 184 lb-ft of instantly available torque. The motor also works as a generator, utilizing the vehicle's regenerative braking system and any unused power from the engine to create electricity. The juice is kept in a 9.2 kWh high-voltage lithium-ion battery located under the rear seat.

The gas engine and electric motor are both integrated into the vehicle’s 8-speed steptronic transmission. Add the two together and the 740e has a total output of 326 hp and 369 lb-ft of torque. The estimated combined mileage is an impressive 112 MPGe and the 740e can go 25 miles (with a maximum speed of 87 mph) on electric power alone.

There are only minor changes for the non-hybrid 7 Series trims. The Display Key now comes standard across the lineup. This key shows the time, service notifications, remaining fuel, and current range, along with the status of the lock system, windows, and glass roof. You can also operate the optional remote control parking system and the auxiliary heating with the key.

Last year’s updates did much to improve the already impressive performance of the 7 Series - new lightweight materials throughout, an automatically adjusting chassis and air suspension, and a transmission linked to the navigation system in order to make anticipatory shifts. And when you’re ready to take control, the driver can adjust the suspension systems, ranging from Comfort Plus (a floating ride) to Sport (a typically road-gripping BMW experience).

The 2016 redesign also updated the infotainment system, iDrive, bringing it to the 5.0 iteration. After receiving much criticism when it was first introduced, iDrive seems to have found its intuitive groove and can be controlled using a touchscreen with gesture technology (new last year), as well as voice commands and the original controller knob. The updated iDrive also allows you to pair your phone with it via Bluetooth by tapping the phone against the dashboard.

While its automated performance technology should keep the 7 Series on the road, these sedans are nevertheless loaded with safety features. The adaptive headlamps adjust to the speed, steering angle, and yaw of the car. The Active Protection system detects impending accidents and prepares the vehicle by pretensioning safety belts, closing the windows and moonroof, and activating post-collision braking. The Attention Assistant recognizes when the vehicle is straying from the lane and signals the driver. There’s also Dynamic Stability and Traction Control, Brake Fade Compensation, a front- and rear-seat Head Protection System, BMW Assist eCall and Remote Services (stolen vehicle recovery, remote door unlock), and a full complement of air bags in front and back.

Users ranked 2017 BMW 7 Series against other cars which they drove/owned. Each ranking was based on 9 categories. Here is the summary of top rankings.