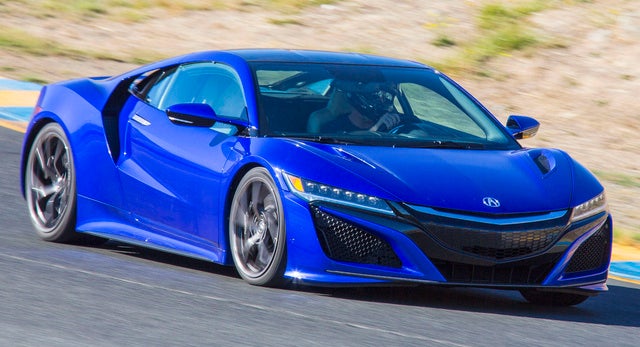 Honda’s original NSX of the early 1990s, branded as an Acura in the United States, was quite a car. It was the first production automobile with an all-aluminum monocoque body and engine, and that engine was the first of its kind to come stock with titanium connecting rods and forged pistons. The cockpit was designed with inspiration from the F-16 fighter jet, and Honda refined the chassis and suspension using input from F1 legend Ayrton Senna. Motor Trend actually called it “the best sports car ever built”, and it was the first supercar that you could realistically use every day. But after a manufacturing run of 18,000, the NSX made a fairly quiet disappearance from the market in 2005.

Honda began teasing a next-generation NSX as early as 2007, but it wasn’t until 2011 that the company made any real commitments, and even then not until the 2015 North American International Auto Show that Acura finally, mercifully, showed a production version. Now, more than 10 years after the last original NSXs rolled out of the factory, and after most of us had gotten tired of waiting, the new model will be available for 2017. The NSX will again be a high-end mid-engined supercar, but the similarities to the 1990s version mostly end there. While not quite as wild, funky, and futuristic as the BMW i8, the new NSX is a similarly forward-thinking take on the supercar concept. With a $156,000 price tag, it costs about as much as an i8, and it also utilizes a combination of good old internal combustion and high-tech electric motors to power all four wheels. The bodywork is made of aluminum and composite, with carbon fiber available for the roof, engine cover, rear spoiler, front spoiler, side sills, and rear diffuser. And while it does have the silhouette and the presence of a high-performance exotic, the beak-like front fascia leaves no doubt that this is an Acura.

The biggest distinguishing feature of the new NSX is what's under the hood...only not really, because this hybrid supercar’s powertrain is pretty spread out. The 3.5-liter V6 that provides most of the car’s power is mounted longitudinally behind the driver and features dry sump lubrication. On its own, it makes 500 hp and 406 lb-ft of torque, but it's also aided by an electric motor bolted straight to the crank that makes 47 hp and 109 lb-ft of torque, either boosting the engine or acting as a generator for the lithium-ion battery mounted vertically behind the driver. Shifting for the V6 is managed by a 9-speed dual-clutch gearbox. The power doesn’t end there, either, as each front wheel gets a 36-hp electric motor of its own.

All in all, the NSX makes 573 hp. Even with all that carbon and aluminum, however, the NSX still weighs in at a hefty 3,800 pounds, thanks to the heavy electric motors and batteries--but its performance should be exhilarating nevertheless. The electric motors provide instant torque, and once the V6’s two turbos spool up, there’s big horsepower available for higher speed. Exact figures aren’t confirmed, but Acura is claiming a top speed of 191 mph and a 0-60 time of somewhere in the mid-three-second range. At lower speeds, the electric motors powering the front wheels can even propel the car on their own.

The 2017 NSX has double-wishbone suspension up front and multi-link suspension in the rear, with magnetorheological dampers on all four corners. Steering is handled by an electric-variable power-assist system, and the weight distribution is 42/58 front/rear. Brakes are vented Brembo discs that measure 14.5 inches up front and 14 inches in the rear, with optional carbon ceramic brakes and track-focused tires. Steering, brakes, stability control systems, dampers, engine, and gearbox are all tweaked by the driving mode selector, which includes Quiet, Sport, Sport+, and Track modes.

Standard interior equipment aboard the 2017 NSX will include cruise control, dual-zone climate control, and LED ambient interior lighting. The cabin's layout is fairly contemporary, probably somewhat familiar territory for anyone versed in the current crop of high-end sports cars. The upholstery is leather and alcantara, and driver technology is centered around a 7-inch touchscreen infotainment display that features HD Radio, Siri Eyes Free voice control, Apple CarPlay, and Google Android Auto. A carbon fiber steering wheel rim is optional, as are an aluminum footrest and aluminum pedals, and a Technology Package gets you a 9-speaker ELS audio system, navigation, and front and rear parking sensors.

Since it's both a completely new model and a high-end sports car, the NSX hasn’t been put through any major crash tests. But it will feature both hill-start assist and a multi-angle rear-view camera.

Available this spring, the NSX will be yet another entry into an increasingly competitive market segment. But Acura's supercar is jam-packed with enough technology to make it a standout, and it has name recognition going for it as well. And although it's an almost completely different car from its predecessor, the new Acura NSX looks to be a name-worthy technical marvel and a much needed image boost for the Acura brand.

Have you driven a 2017 Acura NSX?
Rank This Car