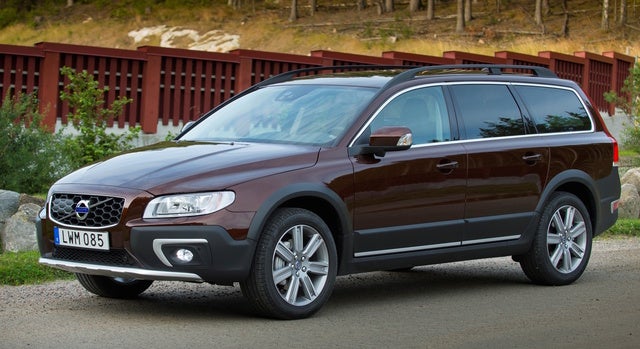 Although the XC70 is fast moving into luxury-vehicle territory along with the rest of the Volvo range, there’s still something of the old Volvo station wagon about it. Particularly with its rear silhouette, this crossover-ish wagon (Volvo classifies it as an SUV/crossover) mirrors the boxy shape of long-discontinued models like the 850, providing something more down-to-earth than the large, pricy XC90 and more capable than Volvo’s regular wagons and sedans.

The XC70 sprang from the V70 lineup back in 2003, and the more rugged model has actually outlived its forebear, as the V70 was discontinued after 2010. And with 8.3 inches of ground clearance, 72.1 cubic feet of cargo space, and a more elevated seating position, the XC70 has much to recommend it in this era of ever-more-elegant crossovers. Volvo has cut the T6 trims from the XC70 lineup for 2016, however, meaning no more 6-cylinder engines. But seeing as the 2015 XC70 had almost 20 different trims, it would seem to be worth losing a little power (and gaining fuel efficiency) in order to eliminate a little confusion and indecision for consumers.

Things being as they are for 2016, all Volvo XC70 trims are a variation on the base T5. This entry-level trim is powered by a 2.0-liter inline 4-cylinder (I4) engine that produces 240 hp and 258 lb-ft of torque mated to an 8-speed automatic transmission. The T5 comes standard with front-wheel drive (FWD), and all 2016 FWD trims use the same basic I4 setup. All-wheel-drive (AWD) XC70s, beginning with the aptly named T5 AWD, employ a 2.5-liter inline 5-cylinder engine producing 250 hp and 266 lb-ft of torque. This engine is mated to a 6-speed automatic transmission in all trims other than the T5 Drive-E, which uses an 8-speed.

The Drive-E trim (full name: XC70 T5 Classic Platinum Drive-E) is specially engineered for better fuel efficiency and performance, though its EPA fuel-economy estimates, at 23 mpg city/31 highway/26 combined, are the same as all other trims using the I4. (The I5 gets 19/26/22.) In conjunction with FWD and the I4, the Drive-E offers smoother shifts, reduced engine noise, and an automatic engine start/stop function. It also includes an Eco+ fuel-saving feature that, when activated, is claimed to improve fuel economy by up to 5 percent. Aside from the start/stop technology, Eco+ can disengage the engine brake to let the car coast or disconnect the AC compressor to avoid consuming energy unnecessarily. Although not exactly earth-shattering in its XC70 application, Volvo’s Drive-E technology is showing plenty of promise on models like the XC90, where it uses a hybrid powerplant to produce enormous amounts of grunt with exceptional fuel efficiency—so one could reasonably expect this kind of improvement to make its way to every Volvo model at some point.

Heated front seats, new 18-inch alloy wheels, and Volvo’s interior air-quality system are all newly standard cross the XC70 lineup for 2016. The T5 and T5 AWD trims feature cloth seats, but all other trims come upholstered in leather. Premier and Classic Premier trims add a moonroof and navigation, while the top-tier Platinum trims (including the Drive-E) feature a 12-speaker Harman Kardon premium sound system and a rear-view camera. Volvo’s Sensus Connect infotainment system comes standard on all XC70 trims: this feature gets you access to a special Volvo cloud developed in partnership with mobile networking company Ericsson, which includes apps like Stitcher, Pandora, and Yelp, along with an in-car Internet browser. This also makes the XC70 a Hotspot-capable vehicle. The Premier and Platinum trim levels even replace the traditional analog gauge cluster with an adaptive digital display that allows the driver to choose between different display themes.

Aside from AWD, anyone living in a colder climate will likely want to choose the optional Climate package, which heats the windshield, windshield washer nozzles, steering wheel, and seats. And perhaps everyone will want to consider the Technology package, which comes standard on the Platinum trims and is optional for all others—this package brings you Volvo’s formidable retinue of safety technology, including road-sign information, adaptive cruise control, forward-collision warning and automatic braking, lane-departure warning, and a driver alert system that detects signs of inattentiveness or drowsy driving. And should you be wondering, blind-spot monitoring comes standard on the Platinum trims.

Although the XC70 has not been crash-tested by either the National Highway Traffic Safety Administration or the Insurance Institute for Highway Safety, Volvo’s excellent reputation for vehicle safety should allow for decent peace of mind. Starting at $37,100 for a FWD T5 and cresting at $48,000 for a T5 Classic Platinum AWD, the XC70 is more or less priced in the luxury crossover range, but it still offers decent value for anyone looking for Volvo’s special mix of comfort and safety.

What Is CPO In The Upper Left Corner Of Car View?

What Does "instant Market Value" Mean?