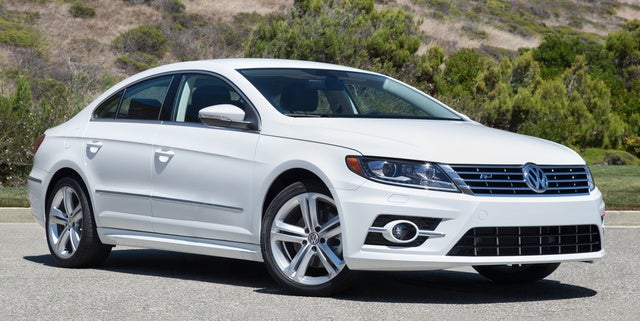 Back in 2009, Volkswagen decided to make its high-end Passat sedan swoopier, sleeker, and sportier, and the result became the Volkswagen CC. The 5-passenger CC sedan returns for the 2016 model year pretty much unchanged from the current edition, though there is a new entry-level 2.0T trim called the Trend, and an upgrade to VW’s Apple-designed Car-Net infotainment that allows the system to interface with smartphones. A new driver assistance package that includes adaptive cruise control, lane-departure warnings, and forward collision warnings and braking also debuts for the 2016 season.

With the addition of the Trend, this midsize luxury-oriented sedan comes in 4 front-wheel-drive-only (FWD) 2.0T trims: the brand new Trend, the up-featured Sport, the sporty R-Line, and the top-shelf Executive, while the full-time all-wheel-drive (AWD) CC V6 Executive 4MOTION returns for 2016 as the flagship trim.

The CC remains a rival to posh models such as the Audi A4, the Acura TLX, the BMW 320i, and the Lincoln MKZ, but most reviewers opine that VW's midsize 4-door lacks the cachet of its challengers. The 2016 CC does, however, offer a handsome profile, an understated and elegant cabin with a wealth of standard creature comforts (even in the lower trims), and a healthy 13.2 cubic feet of trunk space.

Look for the 2.0T Trend, Sport, and Executive trims to pack a 2.0-liter turbocharged inline 4-cylinder (I4) powerplant mated with either a standard 6-speed manual transmission or an available 6-speed auto-manual gearbox (DSG) to put out 200 hp and 207 lb-ft of torque. The auto-manual shifter is slated to return with a Sport mode that adds a little kick, and mileage is again expected to come in at 21 mpg city/32 highway/25 combined in manual trims and 22/31/25 in those 2.0T trims with the auto-manual transmission.

Meanwhile, the AWD-equipped V6 Executive 4MOTION keeps its 3.6-liter V6 engine with the non-DSG 6-speed shiftable automatic transmission for 280-hp and 265 lb-ft of torque. But with its extra cylinders and standard AWD, the V6 Executive 4MOTION will doubtless remain estimated at a much lower 17/25/20.

As noted above, all 2016 CC trims are slated to carry upgraded Bluetooth-integrated Car-Net telematics with a new 6.3-inch MIB II touchscreen display that includes smartphone apps and internet radio capability. All this is complemented in lower trims by a CD/MP3 player with 8 speakers, satellite radio, and an auxiliary audio input, while the 2016 Executive 4MOTION sports a standard 10-speaker premium audio system. Higher-trim features should also be available as options in the lower trims, including the Executive 4MOTION's driver-assistance package.

The 2016 CC is scheduled to show up in dealer showrooms in late summer of this year.

Have you driven a 2016 Volkswagen CC?
Rank This Car