The Toyota Corolla is facing its strongest competition to date, but it has some tricks up its sleeve for 2016 that continue to make it a must-see when considering an economy car. 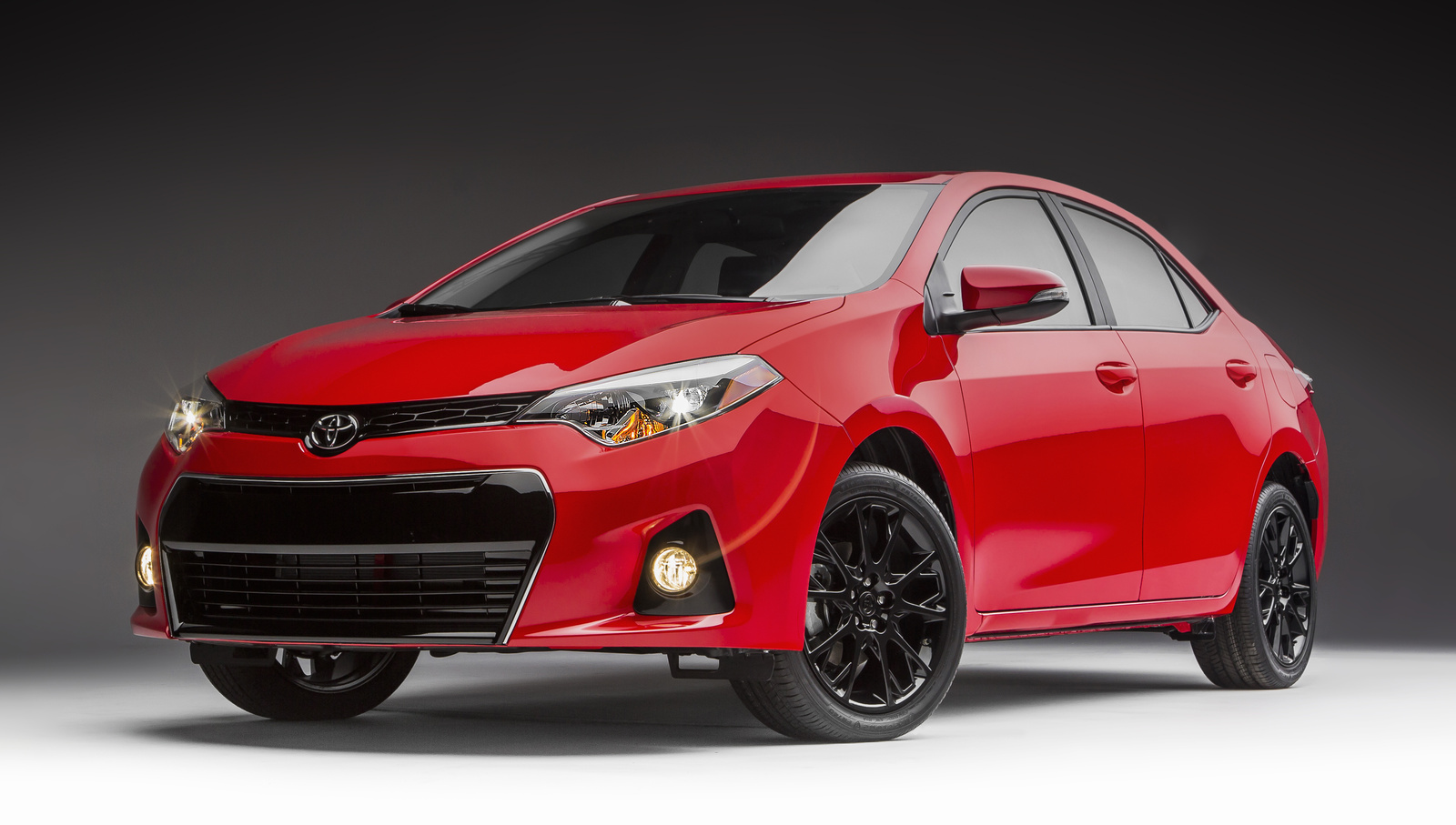 With a focus on impressive fuel economy and cost-effectiveness, the Toyota Corolla has long been the cornerstone of the economy-car market, but for 2016 it faces its strongest competition to date. Many other automakers have brought to market extremely impressive vehicles, and some even have features that the Corolla does not. But the Corolla has all the features you really need, wrapped in an eye-catching package and priced to be one of the best deals in the small-car segment. But is it the best value in small cars? Read on to find out. 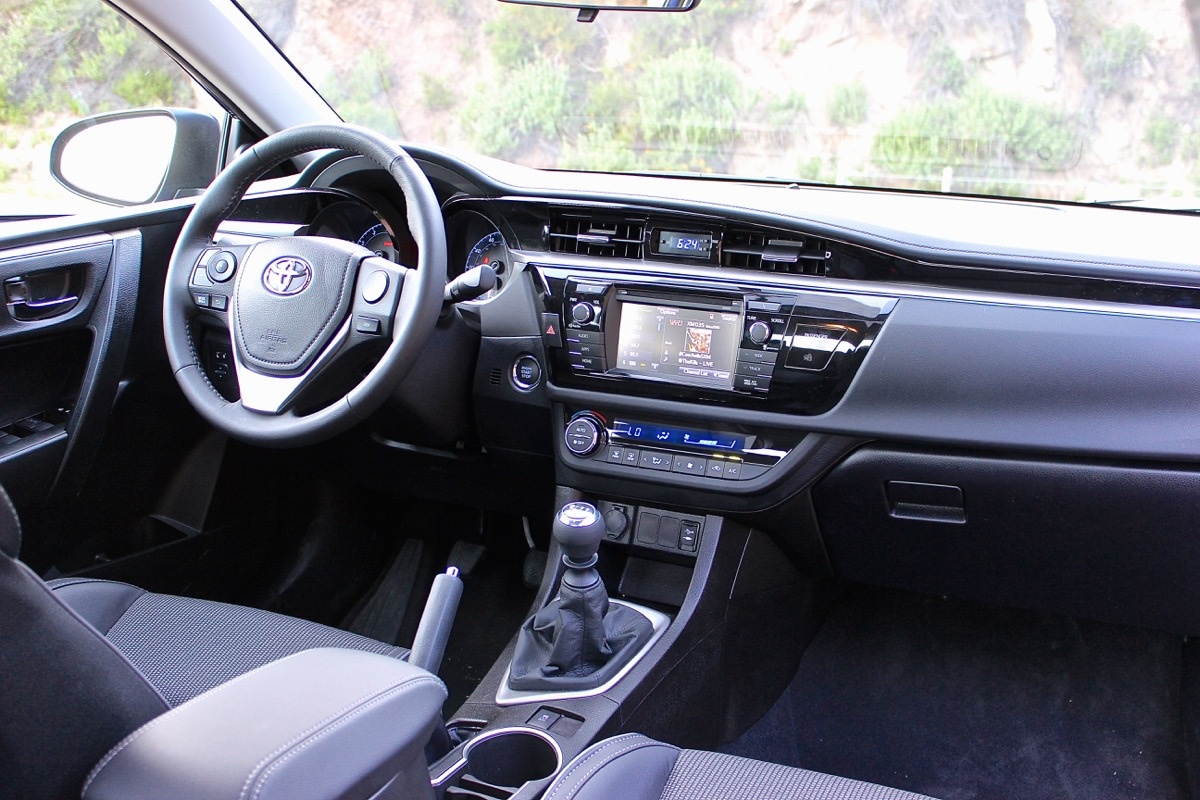 It’s incredible to consider that the Corolla is in its eleventh generation. Quite reliably, each successive generation represents the broad tastes of the buyers of the time. The 2016 model is no different, with an aggressive front end, which has sharp edges in many places. It’s not good enough in 2016 to design a car with a normal grille, and so the Corolla has a large, sweeping lower front fascia that rises to angular headlights.

Although radically different from a version built even 5 years ago, you will instantly recognize the 2016 Corolla as Toyota’s venerable 5-passenger economy car. The S trim has a unique look that's supposed to convey a sporty nature (as much as an economy car can be sporty). It features a unique lower front grille area outlined in black and chrome, unique alloy wheels, red “S” badging, and a rear spoiler, in case you're worried about downforce at the Corolla’s blistering highway speeds. Joking aside, the S does deliver a sporting (if not performance-oriented) look.

For 2016 a Special Edition is available. In addition to special badging, it features all the gear from the S Plus trim and adds unique glossy 17-inch alloy wheels, unique seats with special stitching, red accents in the interior, and “Special Edition” floor mats.

The futuristic look continues in the cabin, with a piano black dash, accented by a color-keyed stripe that goes all the way across the interior. Despite this bold interior aesthetic, the Corolla has a no-nonsense controls layout, which you will learn more about a little bit later. 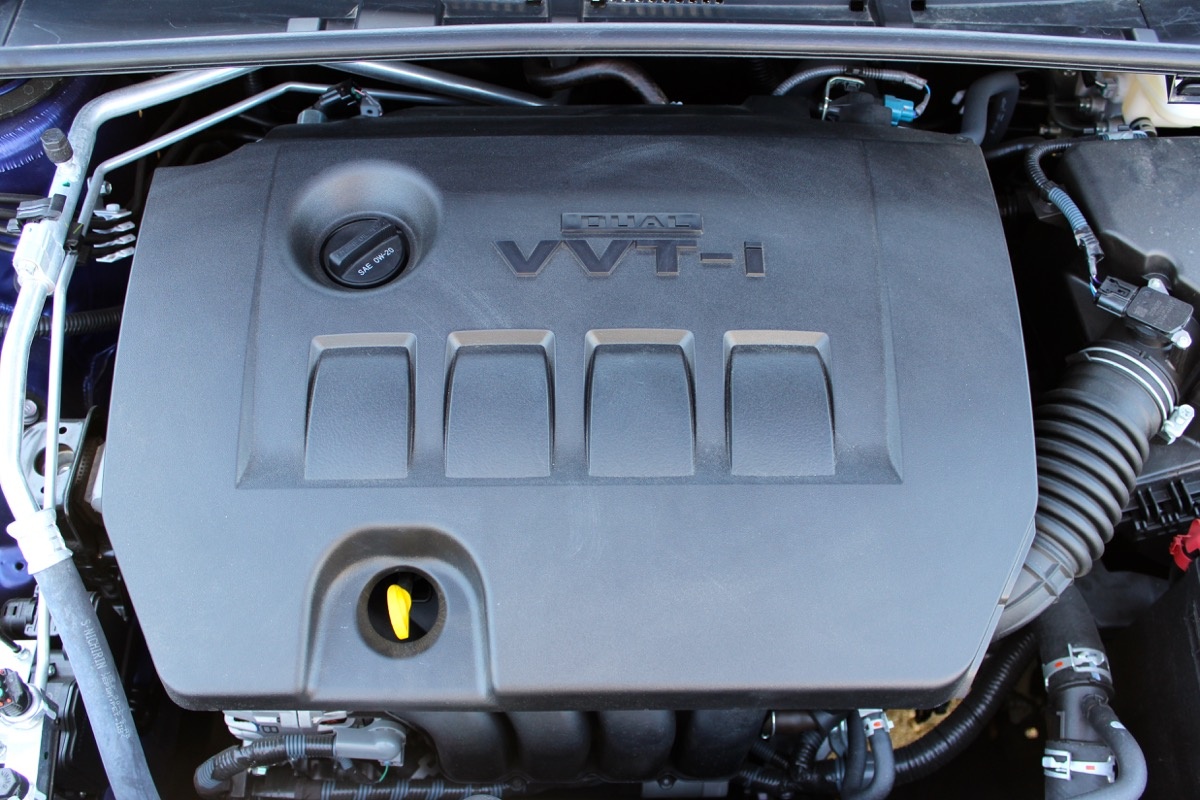 The Corolla is powered by a 1.8-liter inline 4-cylinder. In most versions it makes 132 horsepower and 128 pound-feet of torque. The only exception to this is a fuel-conserving model, dubbed the LE Eco. This model features the same displacement, but with Valvematic technology and other mechanical tweaks that shift output to 140 hp and 126 lb-ft of torque.

Trims for the Corolla are L, LE, the aforementioned LE Eco, and the S, which was our test model. All but the base L come equipped with a continuously variable transmission, also known as a CVT. The L comes with either a 6-speed manual or a 4-speed automatic. That 6-speed manual is also an option for the S Plus trim. All models send power to front-wheel drive (FWD).

The LE Eco obviously gets the best fuel economy of the bunch at 30 mpg city/42 highway/36 combined, but as you can see, the rest of the pack are not too far from there.

The Corolla does not exactly have robust acceleration, but it’s good enough to get up to highway speed and get out of trouble safely. Handling is poised, and the steering feel is decently weighted. It would be tough to call it sporty, but the Corolla’s handling is not completely devoid of fun. Choose one with the 6-speed manual, and the ability to hold shifts longer yields quite decent pickup. While rowing through those gears, you might actually be in danger of cracking a smile. 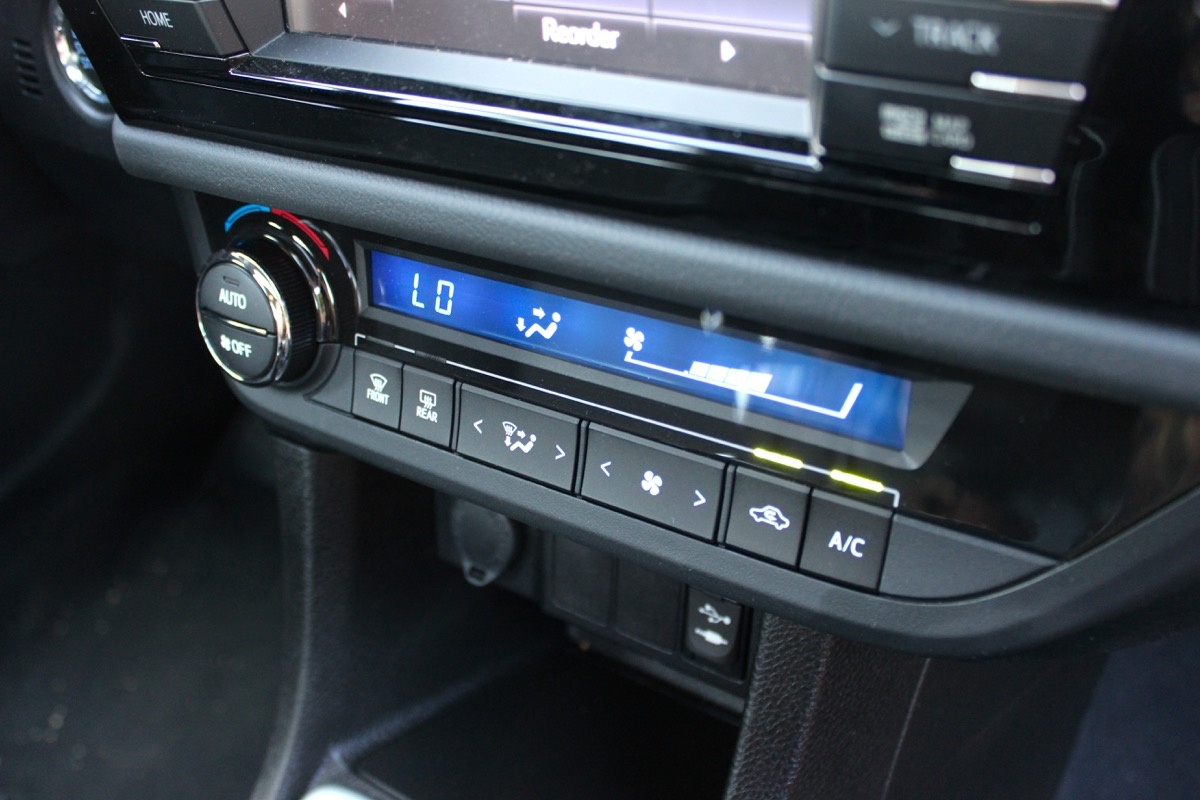 The Toyota Corolla features a very spacious cabin. No “for-a-small-car…” caveats here—both front and rear passengers have plenty of legroom and more than enough headroom. Both rows feature a very upright seating position, which not only makes getting in and out easy, but also provides a commanding view of the road.

The front seat area has multiple cupholder locations and storage areas, both between the seats and in the doors. There is a little flat space at the bottom of the center stack that's home to the USB and auxiliary inputs and a logical place for your wallet, keys, phone, whatever.

The climate and audio controls are no-nonsense, simple, and easy to figure out the first time. The base L features three climate-control dials, but move up to uprated models, and you get automatic climate control with a digital display. Despite this more advanced layout, you still get a no-nonsense dial for the temperature controls.

Why is that important? Other cars offer a very futuristic cabin, but the controls are a logistical mess. If you are one of those hard-working folks that needs to hit the road before dawn, you need to be able to get into your car and set the climate and radio without even looking, and the Corolla has the perfect layout for this. 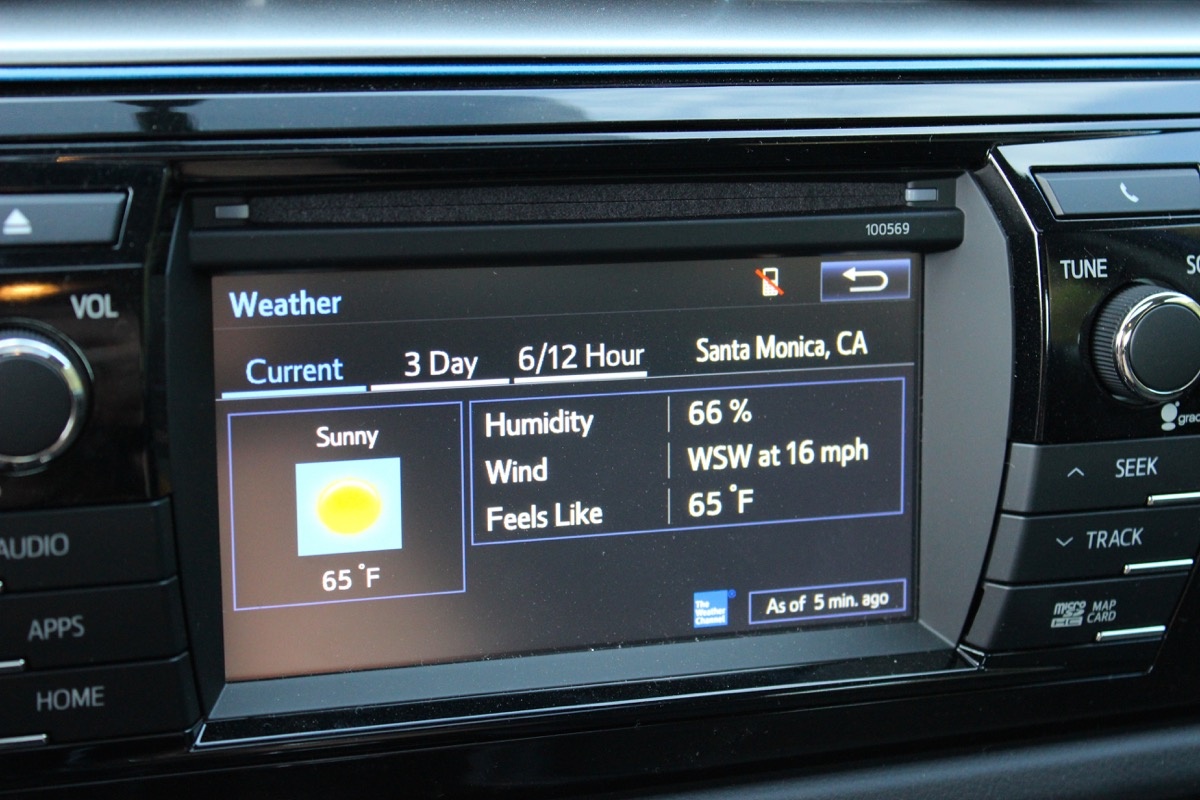 The base Corolla features a very conventional-looking touchscreen and controls layout, with dials on either side, preset buttons, and a bright digital layout. This again reflects the model's approach—it's no-nonsense and straightforward.

Move up to the LE and you'll get a 6.1-inch touchscreen setup that still has a lot of easy-to-use functionality. For one, no matter the complexity of the touchscreen menus, there are still good, old-fashioned dials for volume and tuning. Between them is the touchscreen, which plays home to the upgraded stereo, as well as a host of tech features.

Entune is a series of apps presented on the touchscreen. They are presented as large icons you can swipe through, like on a tablet. You can access apps like OpenTable, Yelp, Pandora, and more. And if you don’t feel like messing with menus, the voice-control system is extremely comprehensive, and when paired to a Bluetooth-connected iPhone, you can even access Siri Eyes Free.

Many automakers are offering smartphone connectivity through Apple CarPlay and Android Auto. But Toyota opted not to join the party with the Corolla, and offers a third-party app for connectivity. Toyota claims it's just as effective as CarPlay and Android Auto, but this could prove a shortsighted move, especially considering how loyal people are today to their smartphone brands. 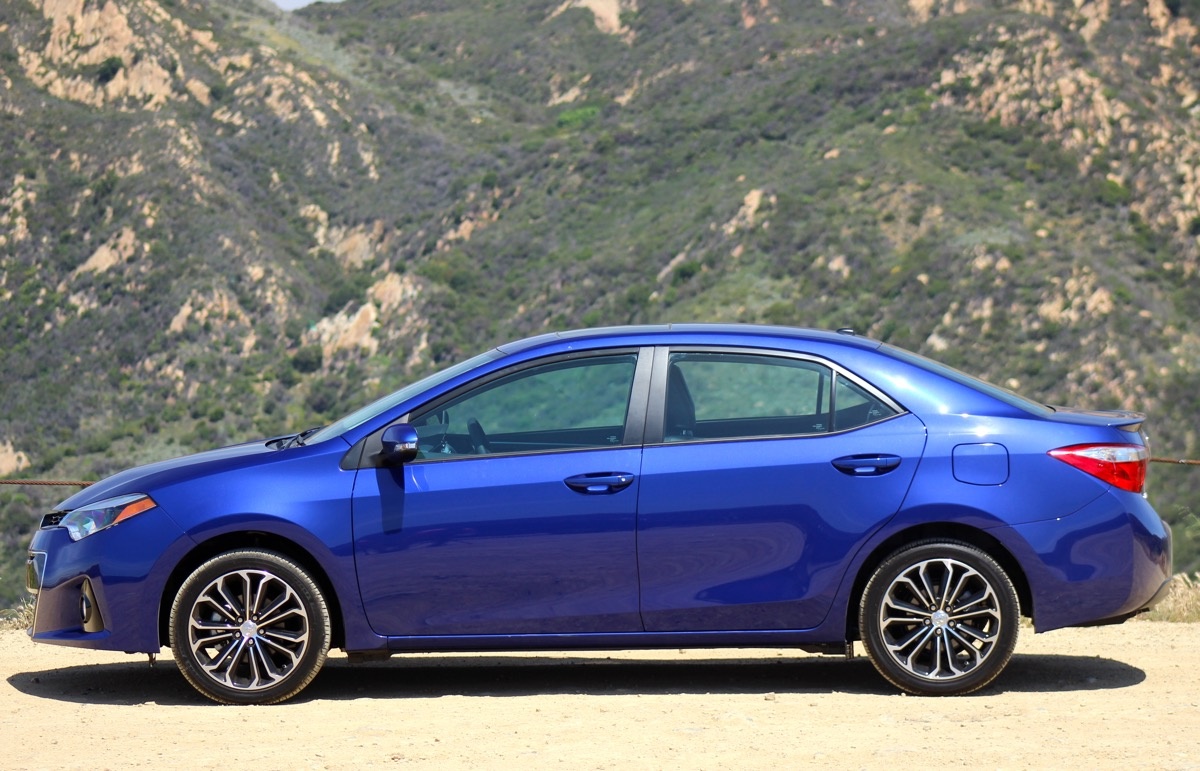 Models equipped with the touchscreen also have an integrated backup camera, but the Corolla lacks many of the high-tech features that are making their way into other small cars. Forward-collision and lane-departure warning, blind-spot monitoring, and even adaptive cruise controls are all available on multiple vehicles in the small-car segment. The Corolla does not offer these at the moment. 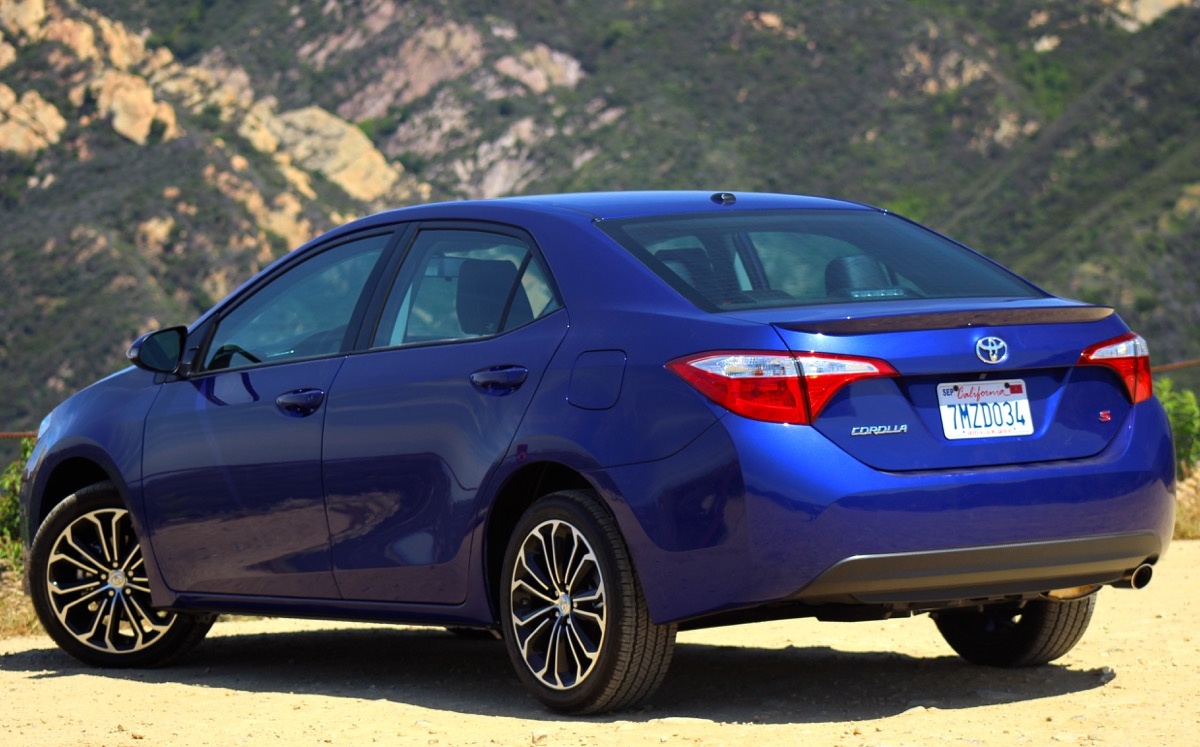 But for many, those safety features are value-adds, and skipping these features yields a more affordable base price. The 2016 Toyota Corolla starts at $17,300 for the L trim, which comes with Bluetooth connectivity, USB input, LED headlights, and eight airbags. Move up to the LE for the touchscreen, remote keyless entry, automatic climate control, and SofTex-trimmed seats. The S starts at $19,365 and includes the unique grille with integrated fog lights, available 17-inch alloy wheels, chrome-tipped exhaust, and a rear spoiler.

This puts the Corolla on par, price-wise, with both the Ford Focus and Hyundai Elantra. Those three cars are some of the most affordable in the class, but the Elantra is a more refined car with a really sharp interior and a stronger list of standard, available, and tech features. That said, if you add all the high-tech entertainment and safety features to the Elantra, you’ll be in Honda Civic territory, which is the most refined and best equipped in the small-car class, but also among the most expensive of the bunch.

The name of the game in small cars is value, and that is the Corolla’s strong suit. It may not have some of the latest and greatest technology, but you need to take into account what you're getting for the price. The 2016 Toyota Corolla is a spacious, cost-effective, and fuel-efficient car that will provide reliable daily driving for years, if not decades to come.

What's your take on the 2016 Toyota Corolla?

ToyotaSucksBalls My 2016 Corolla’s window broke without being hit causing scars on my face!! 10/10 would not recommend! Do not fall for Toyota’s “We’re Safe” facade all they care about is money and pumping out as many cars as they possibly can to get as much of it as possible. They do not care one bit about the consumer and the safety of their vechiles!! Sorry

Users ranked 2016 Toyota Corolla against other cars which they drove/owned. Each ranking was based on 9 categories. Here is the summary of top rankings.

Have you driven a 2016 Toyota Corolla?
Rank This Car

Anyone have corolla , is this level normal ??? dealer didnt top off for me since last oil change , do i have to leave it like that or add some , thanksthanks -

I have a 2016 Toyota Corolla. The right front speaker started cutting in and out for a few weeks then eventually just now get a faint sound from it. Now the front left speaker is doing the same thin...

Bright Lights Will Not Stay On

My brights will not stay on

Does My Car Come With "Beeps" To Alert You Of Pedestrians/close Proximity?

Looking to buy a used Toyota Corolla S 2016 off a dealer. Please let me know, thanks!