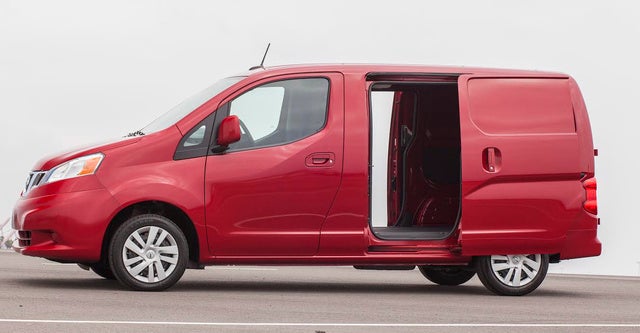 Say you’ve got a small business in a big city, where you have to move your equipment or goods around on a regular basis. Chances are you could use the agility, capacity, and fuel efficiency of Nissan’s 2016 NV200 cargo-dedicated minivan. Sure, it’s somewhat minimally equipped--but it's also practical, and it comes at a very reasonable MSRP.

The compact 2016 NV200, offered in the S and SV trims, seats 2 passengers and features a pair of sliding side cargo doors. Both trims are offered only with front-wheel drive (FWD), and cargo capacity behind the seats is a middling 122.7 cubic feet. Payload capacity comes in at 1,480 pounds.

There are no significant upgrades from the 2015 model other than a new Taxi Yellow exterior color option that is doubtless a tribute to the fact that the NV200 was chosen as the official New York City taxi in 2013. Of course, one ought to be aware of the obvious consequences of driving any urban streets in a Taxi Yellow Nissan minivan.

The only powerplant available on the 2016 NV200 is a 131-hp 2.0-liter inline 4-cylinder (I4), with Nissan’s Xtronic continuously variable transmission (CVT) managing 139 lb-ft of torque. Though you may be left behind at many a green light, you might find consolation in the NV200's estimated mileage of 24 mpg city/26 highway/25 combined.

Given its emphasis on practicality, the NV200 goes light on the features. The base S includes standard 15-inch steel wheels and roof-rack mounting points. Inside, you'll find cloth upholstery, a single 12-volt outlet, and a fold-flat passenger seat with under-seat storage, along with a tilt-only steering wheel, air conditioning, and a unique Mobile Office Style center console. Entertainment is limited to a standard AM/FM radio with 2 speakers and an auxiliary audio input.

Though reviewers are, by and large, fairly impressed with Nissan’s 2016 NV200, they point out that Ford’s Transit Connect, Chevy’s City Express, and Ram’s ProMaster City might also be worth a look.