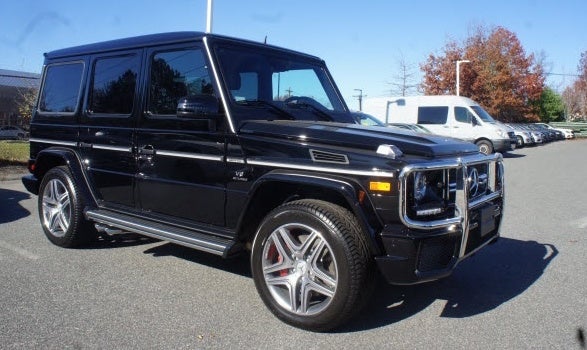 Average user score
5 ⁄ 5 stars
Based on 5 reviews
Review by MissMoe80 — Best Truck EVER. The solid feel and ride is incomparable. Worth every cent and best built vehicle ever Read more
Review by dalilah — This is a great vehicle. Still looking to find the idea one for me Read more
Review by GuruL13DT — You can not compare anyting with Gklass Mercedes.its the only one Read more 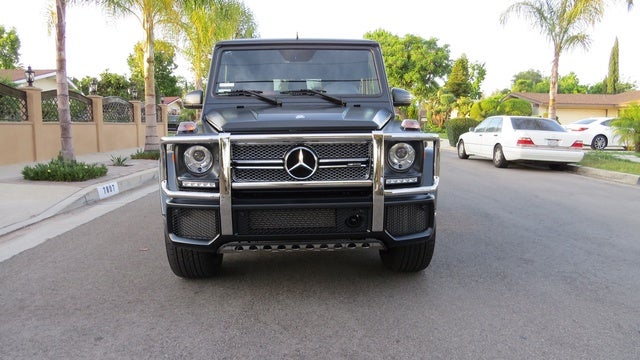 Looking just like what it was intended to be--Germany’s answer to the Humvee--Mercedes-Benz’s 2016 G-Class still seems wildly out of place trundling through midtown Manhattan. But this rugged full-size sport ute will still climb any mountain, ford any stream, and get you to the office in the worst of wintry weather. Of course, with an MSRP that approaches stratospheric levels, you’re more likely to see this boxy throwback parked at a polo match rather than tooling around the lower forty.

The 5-door G-Class, aka the Gelandewagen or G-Wagen, holds 5 passengers and includes a side-opening rear cargo door. Noteworthy updates for 2016 include a new AMG G65 trim that now complements the base G550 and the up-powered AMG G63. The entry-level G550 also gets a new turbocharged V8 powerplant, while the AMG G63’s standard force-fed V8 is tweaked to put out an additional 27 hp. Further changes include a couple of quirky exterior color selections, like Alien Green and Tomato Red, along with a reworked front bumper, larger fender flares, and, for the G550, newly restyled 19-inch wheels and an upgraded instrument cluster. All 2016 editions are also now eligible for an available adaptive suspension system boasting Sport and Comfort modes, and modifications to the G-Class's stock suspension system and electronic stability control (ESC) allegedly improve its on-road handling, which reviewers claim is marginal at best.

Despite all these enhancements, the G-Class still looks pretty much the way it did when it was introduced back in 1979, and that, at least in the opinion of loyalists, isn’t such a bad thing. The new iterations use the traditional ladder-type frame and feature permanent 4-wheel drive (4WD) with low-range gearing. The G-Class offers an attitudinal stance that allows it to climb boulders without breaking a sweat and to submerge itself up to the door sills in water without missing a beat. Cargo space comes in at 75.1 cubic feet with the rear seatbacks folded.

As noted, the G-Class G550 now sports a new 4.0-liter twin-turbocharged V8 engine that mates with a 7-speed shiftable automatic transmission to put out 416 hp and 450 lb-ft of torque. Though mileage figures are as yet unavailable for this new base powerplant, don’t expect much of an improvement over the current G550’s estimated 12 mpg city/15 highway/13 combined. Track tests for the V8, however, have it going from 0-60 mph in 5.9 seconds, which isn’t bad for a 3-ton behemoth.

The 2016 G-Class AMG G63, a beneficiary M-B’s AMG racing division’s performance perks, sports the traditional twin-turbocharged 5.5-liter V8 engine, but with some added kick. Look for an extra 19 hp from this midlevel trim, giving it a total of 563 hp, with an impressive 560 lb-ft of torque. The 7-speed shiftable automatic is standard and the AMG G63 will go from 0-60 in 5.4 seconds, about a half-second off the 2015 model’s time. Gas mileage is expected to remain close to the current 12/14/13.

The brand new G-Class AMG G65 packs a normally aspirated 6.0-liter V12 powerplant that’s also managed by the 7-speed shiftable automatic to the tune of 621 hp and 738 lb-ft of torque. Look for a 0-60 mph time of 5.2 seconds from the 12-cylinder, with a top end just shy of 140 mph. Mileage figures, though as yet unavailable, probably won't be very impressive.

With a shape that closely resembles the original Land Rover Range Rover, it’s not surprising that the Range Rover and its Range Rover Sport sibling continue to offer the G-Class its closest challenge for sport-ute supremacy. Other rivals include the Lexus LX 550, which isn’t aging quite as well as the G-Class but offers smoother on-road driving dynamics, and Cadillac’s Escalade, with its smooth on-road manners, up-to-date amenities, and safety technology.

What's your take on the 2016 Mercedes-Benz G-Class?

Have you driven a 2016 Mercedes-Benz G-Class?
Rank This Car

Do you guys have a matte black g wagon ?

I Have 3 Questions About The Locking Differentials In My G550.

Question 1. Is it harmful to have center and rear locking differentials engaged when driving at 20MPH on a straight road? Question 2. My car made a sudden clanking sound, and I felt the jolt, too afte...