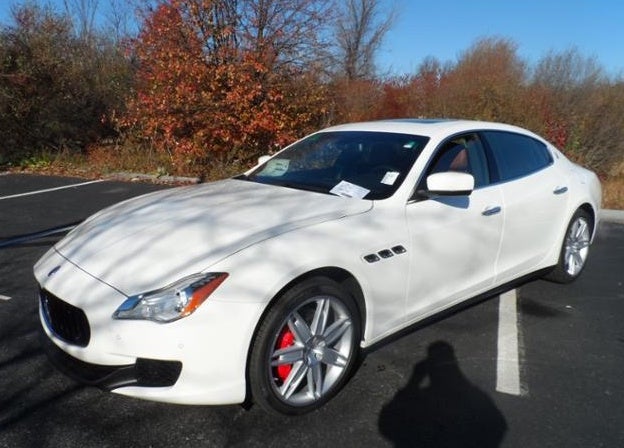 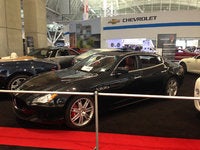 Looking for a Used Quattroporte in your area?

Maserati first introduced the Quattroporte back in 1963, when sporty luxury 4-doors were something of a rarity. Now, of course, they’re all over the place, and the Quattroporte has to answer to range-topping 4-doors from BMW, Audi, and Mercedes-Benz, not to mention Porsche and even Aston Martin. The Quattroporte has been a crucial part of Maserati’s lineup over the last few years, complimented by the 2-door GranTurismo and really nothing else until the arrival of the entry-level Ghibli sedan for the 2014 model year.

That model year also saw a redesign for the Quattroporte, and this sixth generation car is actually what spawned the Ghibli, meaning the two sedans share mostly the same underpinnings, including the chassis, suspension components, and powertrain. Compared to the entry-level Ghibli, though, the Quattroporte’s wheelbase is almost 7 inches longer, its overall length is over 11 inches longer, it weighs 110 pounds more, and it's geared more towards luxury than rigorous driving.

Rivals for the Quattroporte include the Jaguar XJ and the Audi A7, and the base S trim starts (conveniently) under six figures at $99,000, while the range-topping rear-wheel-drive (RWD) Sport GTS comes in at a whopping $141,500. In between is the all-wheel-drive (AWD) S Q4, which starts at $107,900. Changes to the Quattroporte for 2016 mirror those of the Ghibli, and include engine stop/start functioning, blind spot and rear cross path alert, and a power trunk.

Engines for the Quattroporte begin with the same Ferrari-tuned 3.0-liter twin-turbo V6 that comes in the higher trim Ghiblis and produces 404 hp. This V6 can take the S from 0 to 60 in around 5 seconds (4.8 for the AWD S Q4), with a top speed of 177 mph. Performance remains the same compared to last year, but Maserati claims a 12 percent improvement in both fuel economy and emissions, which is welcome, considering that fuel economy has never been one of Maserati’s strong suits. The range-topping Sport GTS model fully separates itself from the lower Ghibli line--at least in the performance department--with a 3.8-liter twin-turbo V8 that makes 523 hp and 479 lb-ft of torque. The extra oomph reduces the 0-60 time to 4.7 seconds and increases top speed to 191 mph. All engines are mated to an 8-speed automatic transmission (with paddle shifters) sourced from the German company ZF.

Maserati added AWD to the Quattroporte in part to appeal to a wider geographic range of buyers, but the Q4-equipped versions of the car can still only put about 50 percent of the engine’s torque to the front wheels when traction gets squirrely, and most of the power is typically reserved for the rear wheels. Overall, the Quattroporte is less nimble than its smaller Ghibli stablemate, but it's still a balanced ride thanks to the double wishbone suspension up front and 5-link suspension in the rear.

On no matter which trim level, the Quattroporte's interior impresses with a blend of traditional Italian and modern luxury. Better quality stereos were added for 2016, and WiFi was made standard across the range just last year. Maserati is also continuing its partnership with Italian fashion house Ermenegildo Zegna, who will give Quattroporte buyers a more bespoke-feeling interior at a premium price. Even the standard cars have a lot of options for individualization on the inside, with numerous premium trim materials and upholstery choices. A power trunk is also now standard.

The 2016 Maserati Quattroporte, like many expensive cars, hasn’t been crash tested, but the quite similar, smaller Ghibli has earned top scores of Good on all tests with the Insurance Institute of Highway Safety (IIHS). Rear cross traffic alert and a blind-spot monitoring system are now standard on 2016 models, and parking is made easier with a rear-view camera that displays on the Maserati Touch Control screen.

The upcoming model year is mostly a mid-cycle refresh for the Quattroporte, seeing as the current generation only came out in 2014, but with added fuel efficiency and convenience features, the sedan is keeping up appearances and remains a feasible alternative to the established big cars from Germany and the newer models coming from the UK. Luxury buyers will also want to note that Maserati has been devoting a lot of attention to the upcoming Levante, which will be company’s first foray into the luxury SUV market. The Levante will debut at Geneva next year and be the third vehicle in Maserati’s lineup to use the architecture already shared by the Ghibli and Quattroporte.

What's your take on the 2016 Maserati Quattroporte?

Have you driven a 2016 Maserati Quattroporte?
Rank This Car

Looking for a Used Quattroporte in your area?