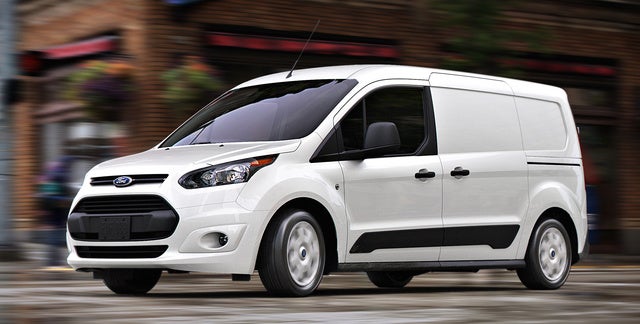 Folks who just don’t need a full-size van, or even a midsize crossover, might want to check out Ford’s 2016 Transit Connect. Again available as either a 2-passenger cargo van or a 7-seater passenger wagon, this capable pint-sized hauler is a city boy at heart, though it certainly holds its own on the highways and byways of suburbia.

Both the 2016 Transit Connect van and passenger wagon iterations are expected to remain available in 2 trims, the base XL and the up-featured XLT, with the top-shelf Transit Connect Titanium again only available in wagon form. Also returning for 2016 are 2 wheelbases, with the short-wheelbase (SWB) versions sporting a 104.8-inch (8 feet, 9 inches) wheelbase and 173.9 inches (14 feet, 6 inches) of overall length (LOA), while long-wheelbase (LWB) editions boast a 120.6-inch (10-foot) wheelbase and 189.7-inch (15 feet 10 inches) of LOA.

Expect cargo capacity for 2- or 5-seat SWB versions to remain 103.9 cubic feet with the wagon-type’s rear seats folded, while LWB cargo capacity returns at 128.6 cubic feet, again with both rows of rear seatbacks folded in wagon versions. Be advised that those rear seatbacks in the Transit Connect wagon editions are a bit more difficult to drop than those in, say, the Ford Edge crossover, or its Flex and Escape siblings. However, a standard fold-flat front passenger seat does add a little more total toting capacity to all variants. Should the high-roof edition return, cargo-acreage will expand exponentially. Additionally, look for the 2016 Transit Connect to be offered with either standard swing-out rear cargo doors or an available overhead rear liftgate, along with standard rear sliding entry doors on both sides. All of the above standard and available door and wheelbase configurations, by the way, lead to a plethora of sub-trim designations.

Standard power for the 2016 Transit Connect stable is once again slated to be a 2.5-liter inline 4-cylinder (I4) engine that’ll throw 169 hp and 171 lb-ft of torque at the front wheels when mated with the traditional 6-speed shiftable automatic transmission. Mileage is expected to return at 21 mpg city/29 highway/24 combined for 2016 versions of the cargo van, with wagon iterations again estimated at 20/28/23.

The 1.6-liter turbocharged I4 powerplant is also scheduled to return as an option for select trims, but, curiously, only for SWB editions. Look for 178 hp and 184 lb-ft of torque to again be directed at the front wheels from the force-fed I4, and to remain under the management of the ubiquitous 6-speed shiftable automatic. Mileage numbers, furthermore, are expected to return at 22/30/25 in both cargo and passenger iterations. Oh, and Ford again claims this little workhorse can tow up to 2,000 pounds when properly equipped.

Don’t expect the 2016 Transit Connect to be plush, by any means. Standard equipment in the base XL cargo van will doubtless remain 16-inch steel wheels, keyless entry, vinyl upholstery, power windows and door locks, telescoping tilt-wheel steering, air conditioning, an AM/FM stereo with 2 speakers, and standard overhead shelves. The XL passenger wagon, meantime, is available only in LWB garb and is slated to return with such added bling as 3 rows of seating for 7 folks, power second-row windows, and rear air conditioning controls.

The XLT van is scheduled to return with heated power-adjustable outside mirrors, cloth upholstery, a 4.2-inch multi-function display, cruise control, and a CD player, with its wagon sibling—again offered in both SWB and LWB variations—tossing in a standard rear-view camera.

Finally, standard safety equipment for the 2016 Transit Connect lineup is expected to include 4-wheel antilock brakes, traction and stability control, front side-mounted airbags, and front and rear head airbags for up to 3 rows of seating. Ford’s programmable MyKey speed and audio limiting system is also expected back as standard equipment, along with a remote antitheft alarm. Depending on the trim selected, front fog/driving lights and automatic headlights will remain either standard or optional safety features. It should be noted that the current Transit Connect iterations score well in government safety testing.

Look for the 2016 Transit Connect to again do battle with Nissan’s even less posh NV200, Chevy's just-introduced City Express, and Ram’s V6-powered CV Tradesman when it goes on sale in early autumn of this year.

What's your take on the 2016 Ford Transit Connect?

GuruX9T Mini van are great which ever you choose. But the deal is who give you the best deal. No question about it. Enjoy what you like or love.

Users ranked 2016 Ford Transit Connect against other cars which they drove/owned. Each ranking was based on 9 categories. Here is the summary of top rankings.

Have you driven a 2016 Ford Transit Connect?
Rank This Car

All of a Sudden Transmission will not shift. 1. There is no fuse on diagram for brake lights 2. I am able to move shifter to all Gears but the transmission doesnt shift. 3. When in shifter is in par...

I went to put my 2016 Ford Transit in reverse and my shifter is stuck. I used the brake shift interlock lever located by shifter to get it to go into drive to get it home. Even with the interlock le...

229 views with 1 answer (last answer about a year ago)

2016 Transit Courier Fan has blown 3 times and so consiqently had 3 new resistors fitted, does anyone know why they kepp blowing? My warranty runs out in 2 months and I'm desperate to get it sorted...

Dealer Posted An Internet Price , Now Raises It After I Became Interested

Kerry auto in Cincinnati, has a 2016 ford transit listed for 17,289. After 3-4 conversations not w says I don't qualify for that price and said it will be higher . Very unprofessional and illegal i...

Is The Flap On Pass Side Removeable After Running Boards Are Installed?

Had running boards installed, there is very little foot space to step on. There is a small skirt over the boards that seems to limit the space, can that be removed.