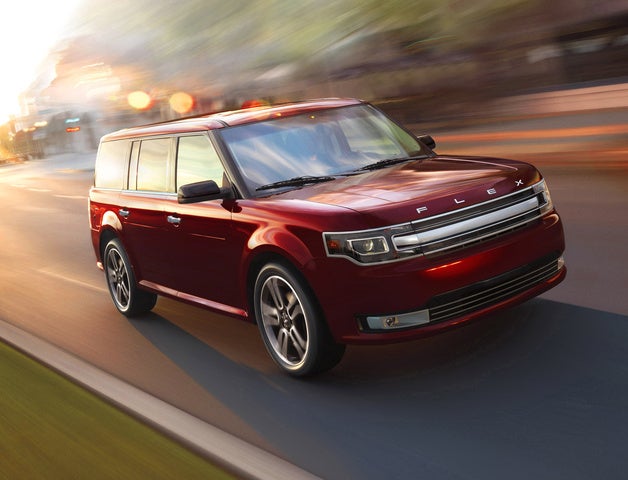 Word from Ford is that the 2016 Flex won’t be going on sale until January 2016. Word from reviewers is that except for some minor tweaks, the upcoming year’s Flex is essentially unchanged from the current version. In any case, this 6- or 7-passenger 5-door full-size crossover should include some hefty toting space, a pair of engine choices, adult-friendly third-row seating, and surprisingly capable ride and handling characteristics.

Expect the Flex to return in 3 trims: the base SE, the midlevel SEL, and the flagship Limited, with standard front-wheel drive (FWD) in the SE and standard full-time all-wheel drive (AWD) in the SEL and Limited. Cargo space returns at a comparatively average 83 cubic feet with the rear seatbacks folded.

A rear-view camera is now standard in all 2016 trims, as is Ford’s improved Sync 3 infotainment technology. Several new exterior colors will be added for the upcoming year as well, along with slightly restyled wheels and a subtly tweaked grille with added chrome. There are also a few minor and as yet unspecified upgrades to this family-oriented crossover’s interior accents.

Available upgrades for both the 2016 Flex SLE and Limited include a fixed rear sunroof, upgraded leather upholstery, rear-seat DVD entertainment, and a trailer hitch and wiring. Optional on the Limited are 20-inch alloy wheels, a cooled storage compartment, heated second-row captain’s chairs (6-passenger capacity), a power-folding third-row seat, and power-adjustable telescoping tilt-wheel steering. Standalone options across the lineup include a roof rack and sliding and reclining second-row captain’s chairs.

All 2016 Flex trims pack a standard 3.5-liter V6 powerplant that puts out 287 hp and 254 lb-ft of torque under the management of a 6-speed automatic transmission. Look for EPA mileage estimates in this normally aspirated V6 to remain a somewhat disappointing 18 mpg city/25 highway/20 combined with FWD and 17/23/19 with AWD.

Also returning for 2016 is a turbocharged 3.5-liter V6 (EcoBoost) engine, standard in all Flex trims equipped with AWD. Mated with the 6-speed shiftable automatic, this force-fed V6 produces 365 hp and 350 lb-ft of torque. Mileage, though, suffers accordingly at an estimated 16/23/18. But on the bright side, trims toting the turbocharged V6 boast a max towing capacity of 4,500 pounds with the optional trailering package installed.

The National Highway Traffic Safety Administration (NHTSA) has only tested the current Flex for rollover safety, and awards it a second-best 4 stars. The Insurance Institute for Highway Safety, however, gives the 2015 Flex its highest rating of Good on all tests except small-overlap frontal-offset, where the Flex received a second-best score of Acceptable.

Owners of current Flex models complain about the less-than-impressive mileage numbers, while frustrations with the Sync infotainment system will, it’s hoped, be assuaged with the newly standard Sync 3 technology. On the plus side, owners again lauded this Ford crossover’s roomy cabin, touring-style ride, adept handling, and overall practicality.

As mentioned, the 2016 Flex won’t go on sale until January, since the Oakville, Ontario facility that manufactures the crossover also makes a couple of other Ford products and will need some re-tooling before the Flex begins production in December. But come next January, look for this practical Ford to again face such rivals as Mazda’s CX-9, GMC's Acadia, and Toyota’s Highlander (with its available hybrid edition).

Have you driven a 2016 Ford Flex?
Rank This Car

Hi What Dose The Car Mean On The Dash 2016 Flex

I was just wondering what the car on the right of the dash meant . I never see it do anything I thought if I had a flat it would say what side .