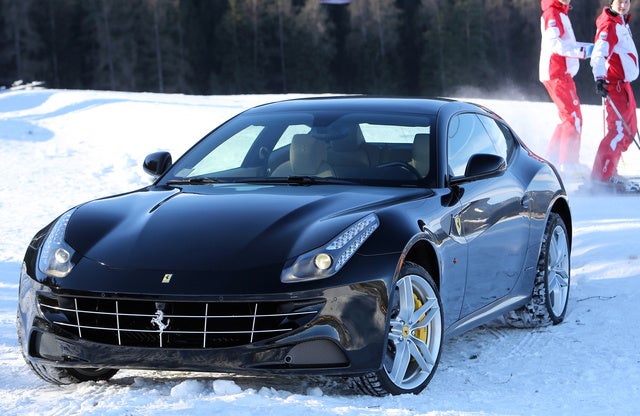 The Ferrari FF, which stands for “Ferrari Four,” was first unveiled at the 2011 Geneva Motor Show and surprised the motoring world for several reasons, namely its hatchback rear and all-wheel-drive (AWD) system. While the engine, a large normally aspirated V12 sitting up front, was fairly typical of Ferrari, AWD was not something the company had put in a road car before. That drive system, combined with the extra cargo space provided by the rear hatch, made the FF the most practical car Ferrari had ever built, and while its styling didn’t win universal praise, it’s an effective car that has found numerous buyers. Ferrari has unveiled a revised FF different enough to warrant a new name – the GTC4 Lusso. Featuring numerous improvements and refinements to the concept begun by the FF, the GTC4 Lusso will not be available until 2017, so the original FF continues into 2016 largely unchanged.

If you had to ascribe human traits to an automobile, the FF is one of Ferrari’s friendlier-looking cars, though it does share basic similarities with the F12berlinetta from the A-pillar forward. At the back, the round taillights and quad exhaust tips are unmistakably Ferrari, but it’s the hatchback rear that sets it apart from anything else in the company's lineup. The sloping tail does lessen some of the interior space, but when there’s a Ferrari badge involved it’s always okay to sacrifice a little function for the sake of form.

Under the hood is the familiar 6.3-liter V12 that has been used in several other Ferraris over the past few years. In the FF, it makes 651 hp and, coupled to a 7-speed gearbox, will scoot the FF from 0 to 60 mph in 3.7 seconds, with a top speed of 208 mph. Those are serious numbers for any car, but for one that weighs almost two tons and has four seats and cargo room, they’re almost unbelievable. Torque reportedly comes on smoothly throughout the rev range. Big, heavy 12-cylinder cars are also thirsty, however, and EPA-rated fuel economy for the FF is 11 mpg city/16 highway.

Most AWD automobiles have a transfer case to distribute power, but the FF distributes power from either side of the engine. The front wheels have their own 2-speed transmission off the front of the engine, and they only help drive the car below fourth gear, meaning the FF is essentially a rear-wheel-drive machine at high speeds. Like other Ferraris, the FF is equipped with magnetorheological dampers and carbon-ceramic brakes. Unlike other Ferraris, however, there’s a specific suspension setting for bumpy roads and a system that lifts the nose, belying the company’s slightly more utilitarian intentions for the FF.

Space in the FF isn’t cavernous, but it's ample if you’re used to other cars with a Prancing Horse badge. Trunk capacity is 15.6 cubic feet, or 28.3 with the seats folded down, and the rest of the interior has the mix of fine leather and aluminum that you’d expect from any new Ferrari. Most controls, including the manettino lever for the driving modes, are on or near the steering wheel, and the infotainment utilizes the Apple CarPlay system.

Priced at almost 300 grand, the FF is very exclusive and rarely seen, even five years after its introduction. And it still looks fresh, even if next year’s GTC4 Lusso is a bit prettier. It’s been an oddball car for Ferrari since the start, but in a world where every high-end manufacturer is rushing to build an SUV, Ferrari has to be admired for creating a practical car that manages to avoid compromising on the performance or pedigree of its other models.

Have you driven a 2016 Ferrari FF?
Rank This Car

Why Is My Email Blocked When I Try To Leave A Review For A Dealer?

Email address is blocked so I can't leave a review for a dealer. What's this?