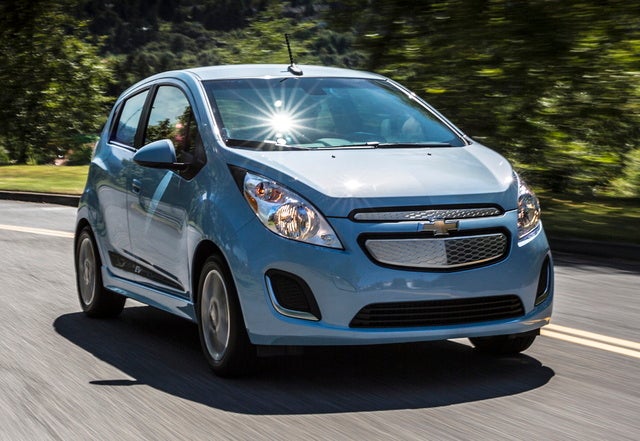 Looking for a Used Spark EV in your area?

The Chevrolet Spark EV has accomplished amazing things. GM’s only fully electric vehicle, this Korean-built micro-EV was launched in 2013 in California and Oregon, picking up where the discontinued General Motors EV-1 left off in 1999. Though sales have been very limited, Chevy doubled down on the incentives for the car in April 2015, and the Spark EV subsequently outsold the Chevy Volt (which is available in all U.S. markets). The Spark will see few mechanical changes for 2016, but its markets may expand--we also expect the upcoming model year to be the Spark EV's last.

To understand the significance of the 2016 Chevy Spark EV, a bit of background is in order. As noted, it is only available in California and Oregon, and only sold “actively” in limited parts of those states. Chevy originally designed the Spark EV to help meet the California Air Resources Board (CARB) mandates for zero emission vehicles. Now other states are adopting the mandates, and even offering big incentives to EV buyers, which help GM’s Spark EV make a little more economic sense for consumers. The Spark EV is scheduled to expand into Maryland in the third quarter of 2015, along with certain limited Canadian markets that offer huge rebates to buyers. We expect Chevy will convert the model year from 2015 to 2016 sometime after October.

Our understanding is that the Korean plant that builds the Spark EV does not do so continually, but rather makes them in slugs before switching back to either non-EV Spark production or production of a related model. The remaining Spark EV inventory will hinge on the new Chevy Bolt EV, an all-electric car capable of travelling 200 miles on a single charge. Once the 2016 Bolt is ready, Chevy will most likely cease producing the Spark EV, though sales of the units already built may continue on for many months before slowly trickling out. Chevy might even limit the sales over time so that it can bill itself as having the most available EV models of any manufacturer.

We expect the Chevy Spark EV to continue into 2016 without the gasoline-powered Spark's exterior updates. As an electric vehicle, the Spark EV uses a unique front end that lacks air venting, meaning a redesign would be costly...and strictly for appearances' sake. Mechanical changes are hardly needed: the Spark EV is one of the quickest EVs available. Its tiny size and 327 lb-ft of torque launch the Spark from zero to sixty in about 7.5 seconds. It feels fast in the city, where the torque can shoot the car from stoplight to stoplight. Most EVs have a shortage of horsepower, but the Spark’s 140 hp is substantial for its size and weight.

The 82 mile EPA-rated range is average for EVs, but unlike the Volt, Leaf and other EVs, the Spark does not pretend to be a “real” car, and so its range is less of an issue. This is a city car, and reviewers say it's a great one. EV fans like to know the efficiency of an electric car, and the Spark excels, with a 128 MPGe city and 119 MPGe combined EPA rating making it one of the most energy efficient vehicles ever sold in the U.S. The Spark EV's lithium-ion battery (made by LG-Chem in Korea) has a 19 kWh capacity.

The 2016 Chevy Spark EV will come standard with the ability to charge on any 110-Volt AC plug (the normal plug in your garage or outside your home), but most customers will opt to install a 240-Volt AC plug with a direct circuit to their home electrical panel. Chevy offers buyers a $500 credit towards a Bosch charger for home installation. It is important to note that not all Spark EVs have been set up to couple to fast DC chargers. Since this is a preview, we would prefer to stop here and suggest that shoppers research Chevy's official fast-charging options for 2016. Fast chargers are used when out and about, and are generally able to charge a Spark EV to 80% of its full capacity in about 20 minutes.

The Spark EV is called a sub-compact, and it's actually one of the smallest cars in the U.S. market. But when the non-electric Spark was tested by IIHS in 2014, it did well on most of the crash tests conducted and scored “acceptable” in the important small-frontal overlap test. These results earned the non-EV Spark a Top Safety Pick rating.

Those shopping for an urban runabout in markets where the Spark EV is sold will find it a fun, fast, and frugal vehicle. However, with the Bolt’s launch looming, it may be wise to act sooner rather than later if you are seriously considering this small electric car.

What's your take on the 2016 Chevrolet Spark EV?

GuruMLBZ bought last one late november in SD , 2016 model. ave 4.5mi/kw 5000miles. brand new miata w youngest driver i ever saw, early 20 something guy next to me. I told him i liked his beautiful new car 0-60 5.8 sec. The light changed and he floored it to show it off. I wasn't expecting a race so he was already going 15 miles per hour . I could not believe how easily i caught and started to pass him when he had to shift to 2nd. I slowed down for traffic. The 50/50 fwd limits this car acceleration and I had not turned off stability/traction and not turned on the sport button to achieve this. If this were heads up, and the proper buttons pushed, spark would have always been way ahead up to 90. The reason 0-60 is not faster is traction in 0-40 range. Other cars when shifted into 2nd and beyond will be accelerating less w each gear plus .5sec per gear change . Spark is always in 1st gear. Same thing occurs in a 737 that is linear acceleration to 700mph. The sports car initially beats it to about 60. My other cars are Prius V, 93 Twin Turbo rx7 faster than 97 gts viper, 87 Buick Grand National over19lbs boost, 86 Lotus 7 replica 2 weber 2.0L.

Have you driven a 2016 Chevrolet Spark EV?
Rank This Car

Looking for a Used Spark EV in your area?

should mt spark be making noise while charging at a 240 outlet?