The 2016 CTS looks like the car that debuted in 2014, but some key updates make it more powerful and more tech-savvy and give it a better shot to take on the well-known German luxury brands. 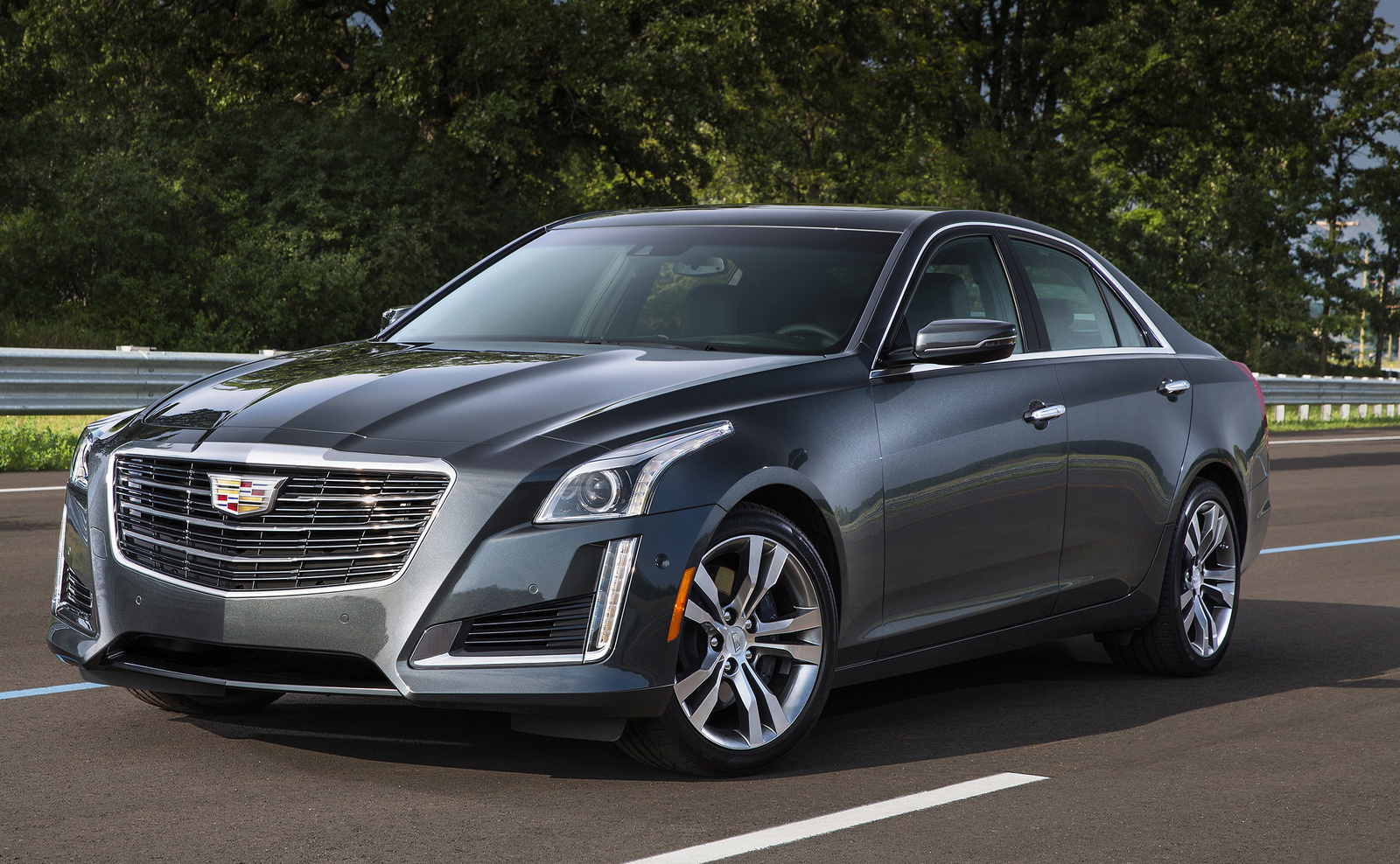 Every brand needs to undergo occasional makeovers to keep its product portfolio relevant. Brands like Lexus and Jaguar have been doing this the last 5 to 10 years, but the brand that took it upon itself to reinvent its image, and the car that started it all, was the CTS. It arrived in 2002 and was the first truly modern Cadillac. Unlike its big land-barge predecessors, the CTS was taut and featured angular styling and forward-looking engines and technology. 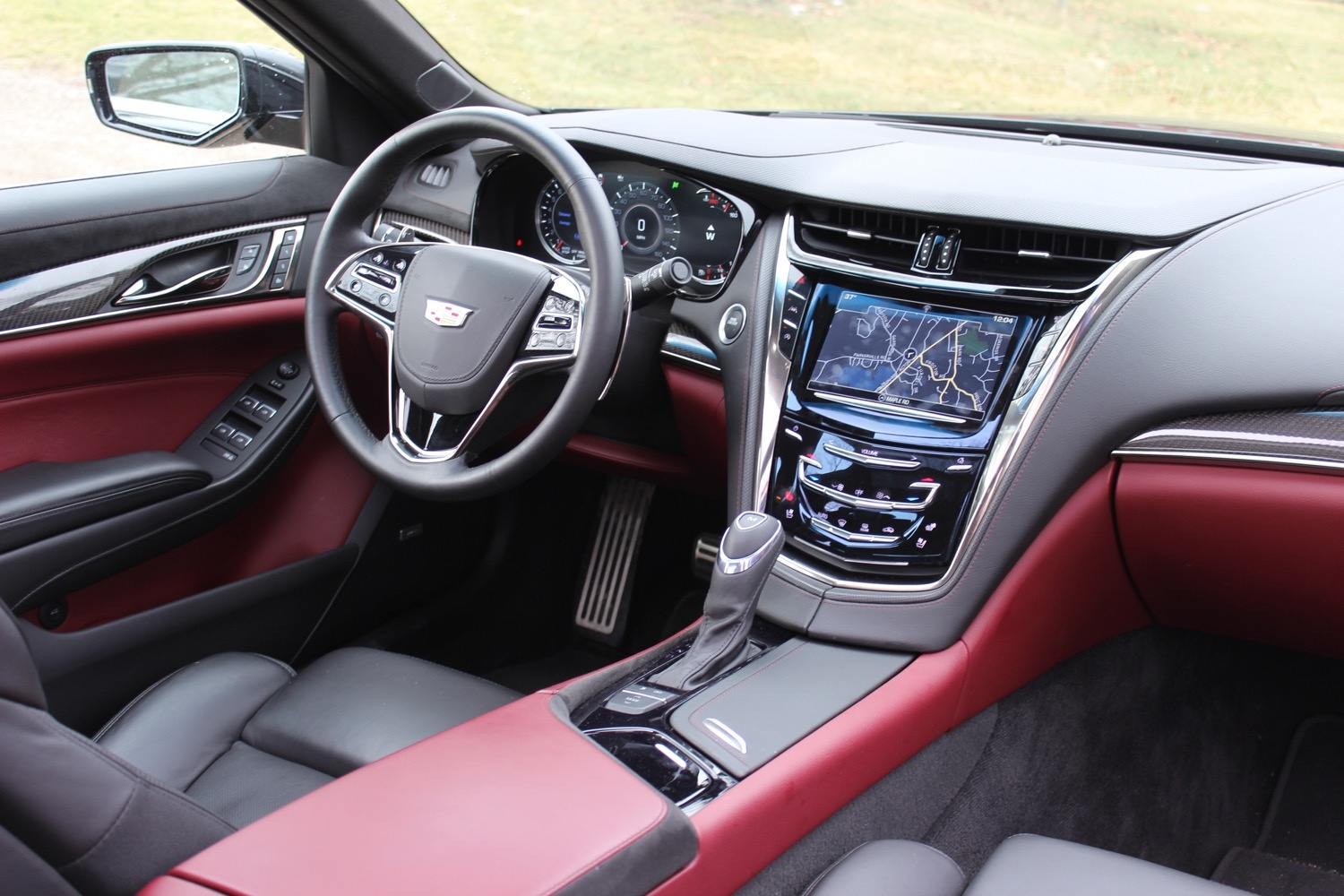 The third-gen CTS effectively stretches out the design cues of the second generation. The headlights are longer, but just as angular, and the grille shares a similar shape, but is stretched out to give it a more regal appearance. At the center of that beaming grille is the revised Cadillac logo, which has fewer details for a generally sleeker appearance that's in tune with the brand’s lowering its target age demographic.

Out back, the sharply raked rear window gives way to the angular rear end, capped by the rear spoiler, integrated into the top of the rear deck lid and center brake light. These design elements make the CTS an extremely competent rival to traditional luxury-sedan stalwarts, such as the Audi A6, BMW 5 Series, and Mercedes-Benz E-Class. And as we’ll see later, the CTS takes it to these competitors at a lower price point.

Inside, the CTS makes a quantum leap over the fit and finish of the second-gen car. All dash surfaces are soft-touch and feature quality stitching. The interior of our test car features a two-tone interior with black leather and red inserts. There are also available carbon-fiber interior accents that give the interior of the CTS the feel of a more-welcoming BMW M5. 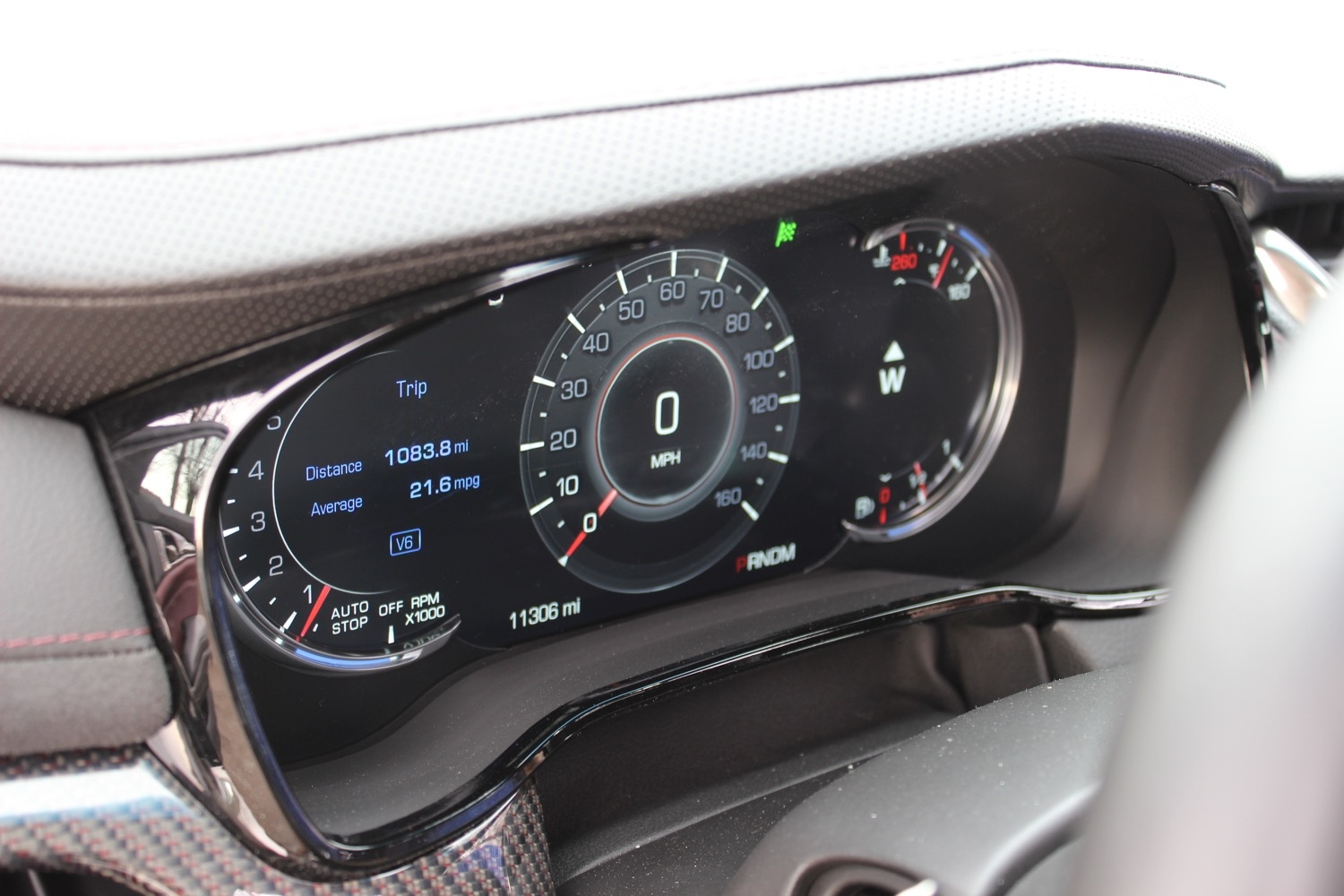 The 2016 Cadillac CTS is available with one of three engines. The base engine is a 2.0-liter turbocharged inline 4-cylinder. It makes 268 horsepower and 295 pound-feet of torque. The mid-level engine offered (and on our test model) is a naturally aspirated 3.6-liter V6 that has been updated for 2016. This engine was named a Ward’s 10 Best and puts out 335 horsepower and 285 lb-ft.

The top-end engine is found in the CTS Vsport, and it’s a twin-turbo 3.6-liter V6. It puts out 420 hp and 430 lb-ft of torque. Power is sent through a new-for-2016 8-speed automatic transmission to the rear wheels or available all-wheel drive (AWD). The Vsport’s 8-speed has more aggressive gear ratios for high-performance driving.

But our 3.6-liter V6 AWD model had more than adequate power, responsive handling, and supremely confidence-inducing braking capability. It features a sport suspension and Cadillac’s incredible Magnetic Ride Control, which can actually modulate its own damping. It is one of the attributes modulated by Cadillac’s Drive Mode System.

Controlled by a toggle in the center console, the CTS offers Touring, Sport, and Snow/Ice driving modes. Each of these modes tweaks the suspension, steering, and throttle response for each driving condition. We left the CTS in Sport mode, which had robust acceleration, especially when getting up to speed on the highway. Jumping around busy city streets was a bit more difficult, as the transmission tried to find the ideal gear among all 8 cogs, but overall it provided a truly fun driving experience. 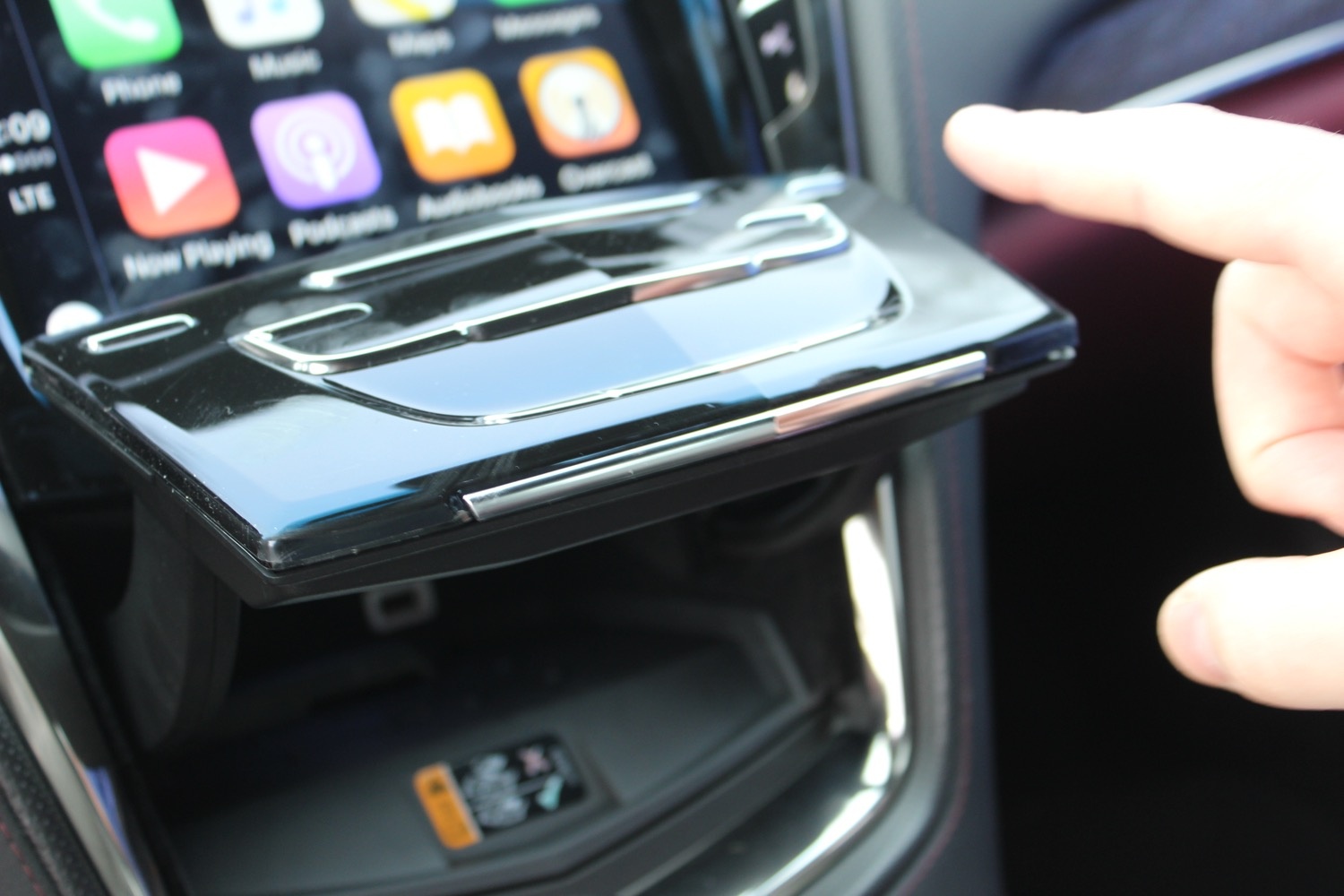 The CTS features a unique touch-captive control system for audio and climate toggles. There is no volume knob, but you can simply drag your finger across the bar at the center of the console to raise the volume. It is not a system of buttons, but not quite touchscreen, either. Think of the buttons on a microwave. A really neat feature is the moving center panel below the audio and climate controls. Tap the bottom of the center stack, and this secret compartment opens, revealing a space for your phone, along with a USB port. It's a neat bit of kit.

And the problem with that is it is somewhat sensitive at times. You might be reaching for the navigation system and drag your finger across one of the touch-sensitive buttons, and automatically turn the climate control cold or change the radio station. It happened to us several times in the course of a week.

Finally, the attractive chrome on the sides of center console does have a downside. At certain times of day, the sun can catch it just right and blast rays right into your eyes. Sunglasses can alleviate this, but it was certainly inconvenient and potentially dangerous in traffic. 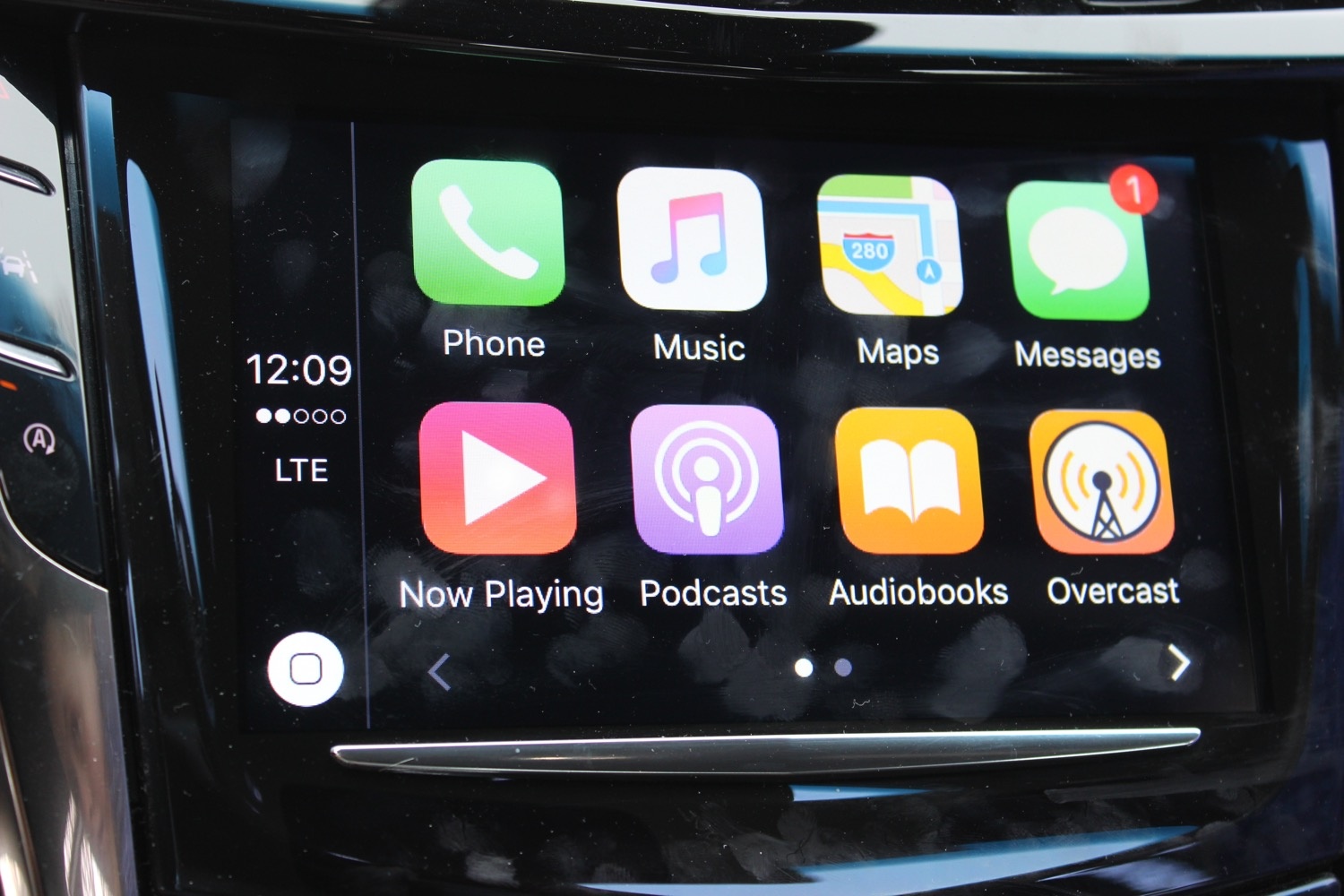 The centerpiece of Cadillac’s suite of technology is CUE, aka Cadillac User Experience. It is an infotainment touchscreen system that in some ways resembles a tablet layout and in other ways has some of the negative aspects of the Intellink/MyLink system found in the rest of General Motors' lineup.

The CUE system is customizable in that you can drag and drop the icons on the main screen among multiple menus to make the icons that are most important to you easy to find and use. The main logos are audio, navigation, phone, climate, and settings, as well as Pandora and other entertainment apps. There are also toggles for OnStar, and – when an iPhone is plugged into the USB port – Apple CarPlay.

A new addition to CUE for 2016, CarPlay allows you to access much of the functionality of your iPhone on the large center touchscreen of the CTS. You can use your own smartphone’s phone, text, music, maps, and Pandora and Spotify apps, among others.

What makes this system so great is that it's not a one-or-the-other approach. You can transition seamlessly from CarPlay’s maps to CUE’s climate-control menu.

But it’s not all good with CUE. For one, it can be very buggy. Sometimes the system will lock up, and other times it will completely shut down. The hope is that this is isolated to this particular vehicle or release of the software and that as time goes on, all the bugs in this very powerful system will get sorted out. CUE has many things going for it that outweigh the bugs we experienced.

Our test model also featured a head-up display that was customizable and multicolored. It can present things like speed, radio station, and other vital information directly on the windshield, but low enough so that it’s not distracting. It also presents turn-by-turn directions, one of the best parts of this system. 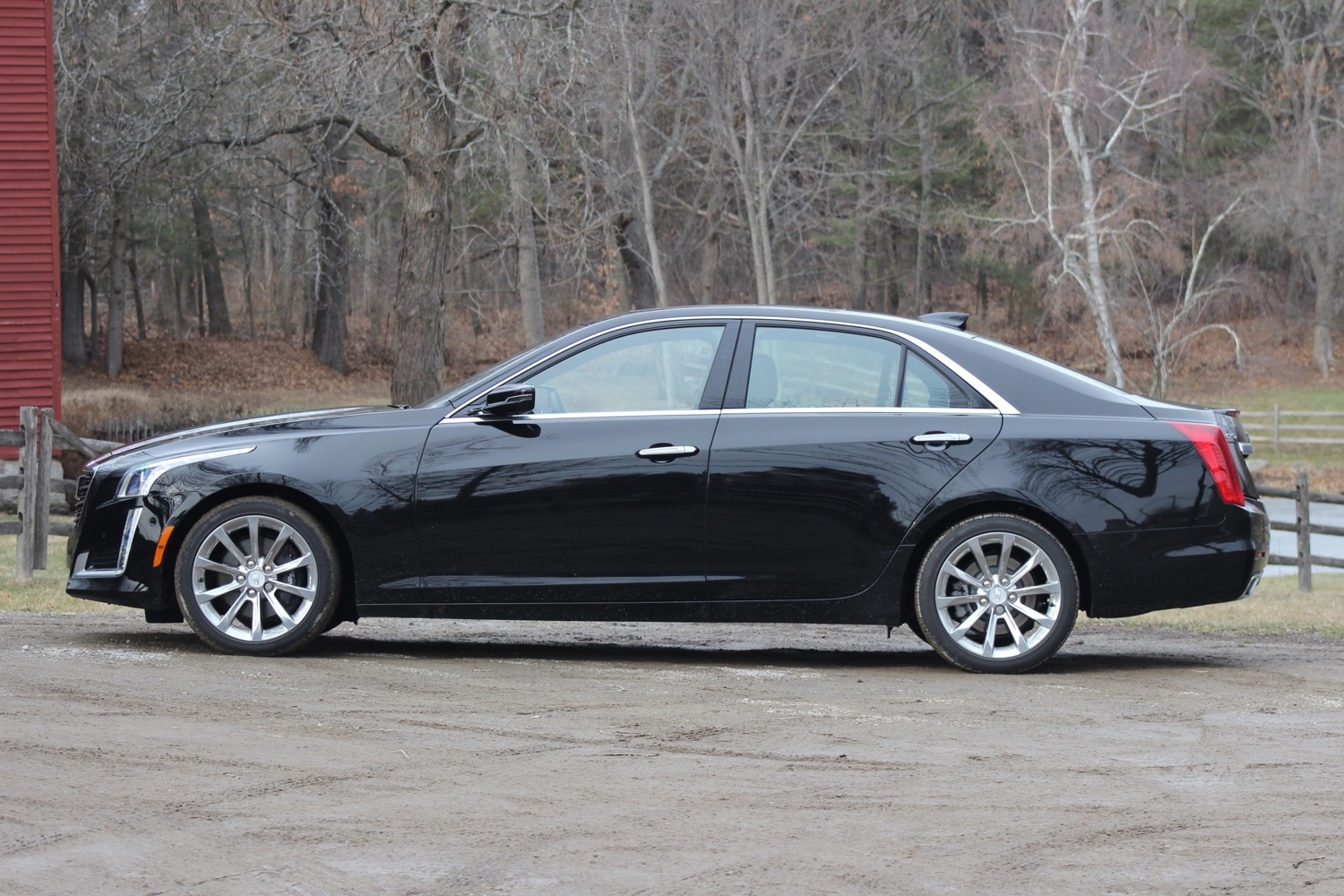 The CTS has a host of standard and optional safety features representing the state of the art, including 8 airbags, a backup camera, and a surround-view monitor that shows you the curb on all sides of the car.

Mechanically, the CTS has a long-ish wheelbase, and as such, its turning radius does not feel supremely tight. That is where the surround-view camera system came into play in our time driving the vehicle. It allowed us to park in busy parking lots and parallel park in the city with ease.

There is also a standard driver-awareness package, which includes a blind-spot monitoring system, lane-departure warning system, rear cross-traffic alerts (which warn you about passing traffic when trying to back into a busy street), and rain-sensing wipers. 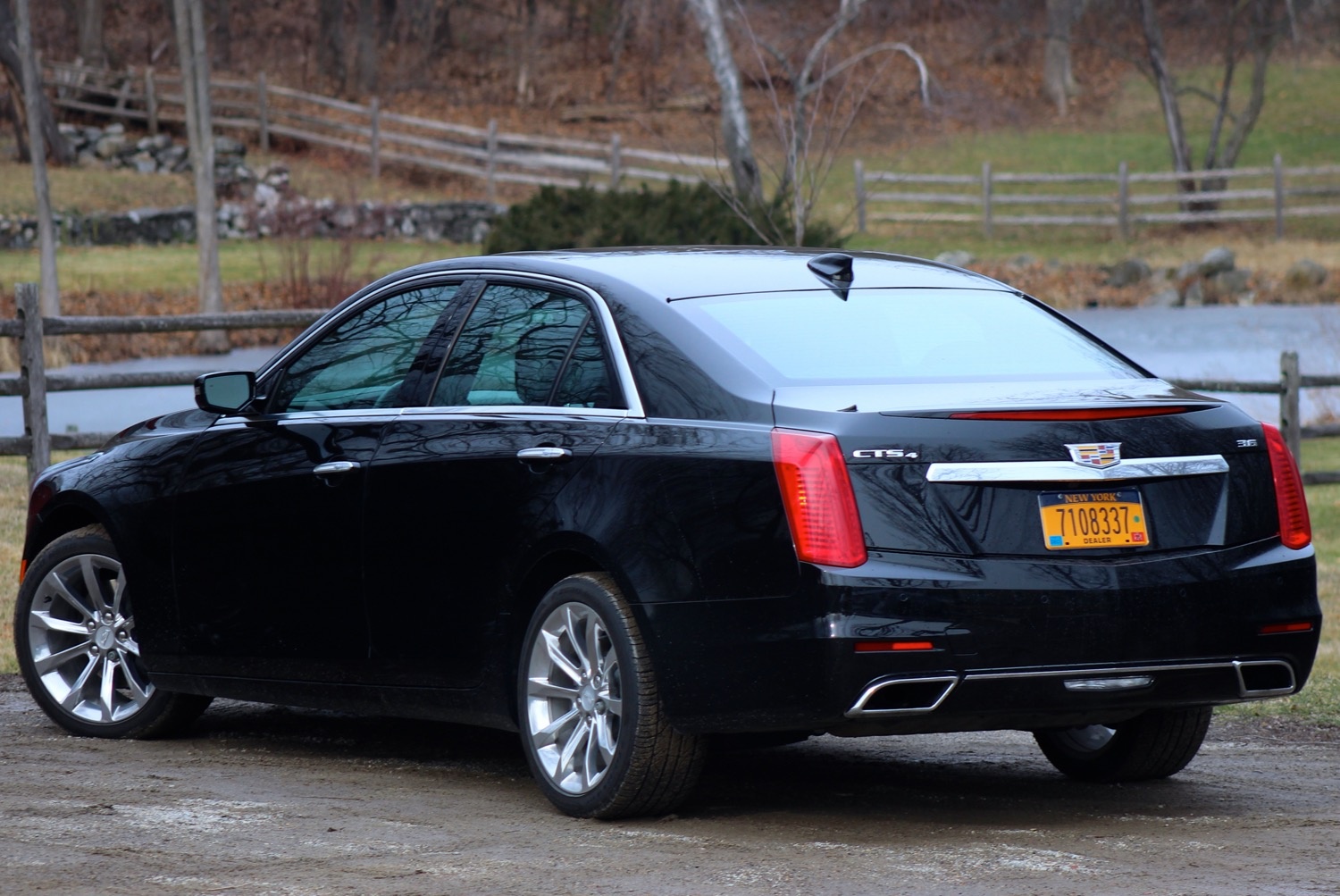 This is where the CTS truly shines. A base 2.0-liter model starts at $46,555. There are Standard, Luxury, Performance, and Premium trim packages, each offering its own unique set of goodies. The Luxury trim adds leather seating, a Bose stereo, a navigation system, some safety tech, and 17-inch, 10-spoke wheels.

Compare that to the Mercedes-Benz E-Class, which starts at $53,100, or the BMW 5 Series, which starts at $50,200. The German luxury automakers tend to make you shell out quite a lot for creature comforts. For example, a BMW 535xi (with a 6-cylinder and AWD, like our test vehicle) starts at $58,150, and that’s before the bevy of options. Equipped similarly to our CTS, an optioned-up 5 Series will fetch upward of $75,000. A Mercedes-Benz E350 4Matic (AWD) starts at $56,525, but load it up with all the same options, and you’re looking at a similar $75,000. Those prices are both well above the CTS's $68K with all the same equipment and options.

That's the beauty of the 2016 Cadillac CTS; it offers everything BMW and Mercedes-Benz do, but at thousands less. Your taste preferences might steer you toward an import, but spend some time in this Caddy, and you’ll be singing a different tune!

Users ranked 2016 Cadillac CTS against other cars which they drove/owned. Each ranking was based on 9 categories. Here is the summary of top rankings.

Have you driven a 2016 Cadillac CTS?
Rank This Car

Why Doesn't Radiator Fan Not Spin When First Starting Engine Of 2016 Cts 2....

How Long Does't It Take A Car To Ship After The Final Sale?

How long does it take a car to ship? I finalized my purchase Friday and I still haven't received word that it's been scheduled for pick up to ship to me.

Is The Cadillac Certified Warrenty Bumber To Bumper Coverage ?