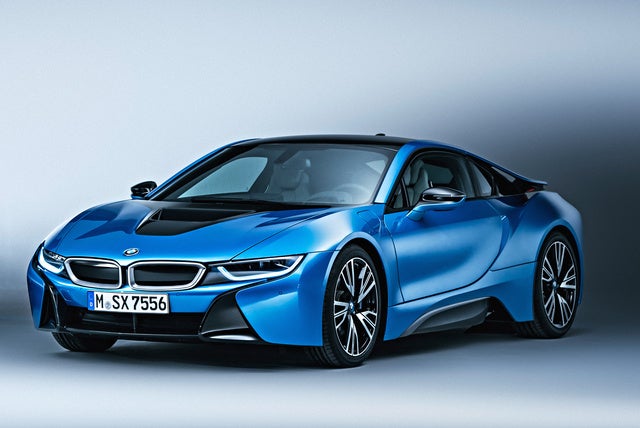 The BMW i8 is a big deal, to put it lightly. It has brought hybrid technology and exceptional fuel efficiency to an exotic supercar, but unlike the gas-electric hybrids from McLaren, Porsche, and Ferrari, the i8 comes at a price that mere mortals (relatively wealthy ones, anyway) can afford, and should sell in reasonably large numbers. The car world was unsure whether a truly efficient hybrid sports car could be a viable alternative to established models like the Porsche 911 or Audi R8, but as with Tesla and its Model S, BMW has pulled off something very exciting.

As the i8 is such a new model, and already so futuristic and high-tech, changes for the 2016 model year were bound to be minimal, and they are. An i8 Spyder will make its debut at one of the big international auto shows next year, but it will likely be intended for the 2017 model year. For now, the i8 sits atop BMW’s new “i” range of cars, which includes only the i3 so far--additional midlevel models like the 4-door i5 are on the way. The 2016 i8 also gets BMW’s innovative “Laser Lights” headlights, which were previously available in European models but were pending approval by the FDA, which is actually the agency that regulates laser technology in the U.S. The Laser Lights have an amazing high beam range of 600 meters, which is double the range of modern LED lights. They're also smaller and lighter than other headlights and will (mercifully) turn off automatically for oncoming traffic.

Aside from its wild, angular, and eye-catching carbon fiber bodywork, the most noteworthy thing about the i8 is of course its powertrain. Frankly, though, that powertrain doesn’t sound like anything too exciting at first. It has a Mini-derived 3-cylinder displacing 1.5 liters with a 6-speed sequential automatic powering the rear wheels, while a small electric motor powers the front wheels. Although this isn’t the usual recipe for high performance, the gas motor is turbocharged for 228 hp and 236 lb-ft of torque, and the electric motor is good for the equivalent of 129 hp and 184 lb-ft. That’s 357 hp and 420 lb-ft in all, meaning the i8 can sprint from 0 to 60 mph in 4.2 seconds on the way to a top speed that, as in many modern German cars, has been limited to 155 mph. Another hybrid supercar--like a McLaren P1--would certainly run rings around the i8, but at $140,700, the BMW costs about a tenth of what a P1 costs and is more than quick enough for some serious fun.

BMW put forth some pretty ambitious claims for 100-plus mpg fuel numbers, but the EPA has given the i8 a more realistic rating of 76 mpg, and that number will go down even further if you drive the i8 like the performance car it is. On gasoline alone, however, the i8 will still do an impressive 28 mpg combined, while the car's lithium-ion batteries will move it 15 miles at up to 75 mph on electric power alone. These on-board batteries are partly charged by regenerative braking, so full power from both engines is usually available, but the electric motor can also be charged from a garage outlet.

Although the i8 makes extensive use of carbon fiber and has a lightweight aluminum chassis, batteries tend to be pretty hefty, and the car weighs in at a robust 3,455 pounds. It’s also not a particularly plush ride, in part thanks to tires that are harder and more focused on fuel efficiency than your average set of performance tires, and its electric power steering has been criticized for being a bit numb.

The i8, like the Porsche 911, actually has 4 seats. But also as with the 911, those seats are tiny and not particularly useful. The i8 is also a bit hard to enter and exit, partly due to its scissor doors (which don’t have door pockets), low seats, and wide sills. Once inside, however, the i8 has a purposeful, sporty, and comfortable interior. While the i3 has a bit of an over-the-top eco-crazy cockpit, the i8 is more restrained and palatable for the high-end sports car buyer, though there are some unusual materials to be found, such as reclaimed wood and recycled fabric. In the center of the dash is an LCD instrument panel, and there are both USB and 12-volt ports.

While the i8's hybrid system gives it a better range than that of a purely electric car, don’t expect to take this thing on many long trips. There’s not much room for luggage and the interior storage compartments are fairly shallow. Don’t expect to be doing any work on this car yourself, either. Removing the engine cover for the gas motor apparently requires two people, and the cover itself is fairly fragile. Once it’s off, there’s not really any room to wrench on anything, and even the windshield washer fluid reservoir is notoriously hard to find. Other parts of the car’s design have been criticized as well for being convoluted or just plain over-engineered--but, then again, the i8 is a showcase for BMW design and for some people that over-engineering is probably part of the design's appeal.

Being an expensive car, the 2016 i8 hasn’t been crash tested, but the passenger “cell” in the car is constructed from carbon fiber and designed to protect occupants in the event of a crash, and the carbon fiber protects occupants from possible battery problems taking place underneath. The i8 is available with a Driving Assistant package that has collision warnings as well as Surround and Side View with object detection. That package would be especially helpful for anyone doing any kind of tight parking in their i8, because although it is the mid-engined supercar of the future, it still has the one shortcoming that all mid-engined supercars share: poor rear visibility. One look at the crazy space-ship contours of the i8’s rear end, however, probably makes it worth putting up with any such problems.

Mannyfresh611 My take will be the i8

Hot Seller Cars, How Do I Look All Of Them Up? Is There A Link

Hot Seller i see this icon, i understand what it means but is there a way to search just the hot seller cars