Simple, unadorned, and for drivers who don't need to show off, the 2 Series is a modern BMW distilled from the company's best rear-wheel-drive sports cars. It's fun—the way all BMWs once were.

BMW doesn’t call itself the maker of the “Ultimate Driving Machine” for nothing. The 2 Series—which replaced the 1 Series in the U.S. for 2014—is that sort of car. BMW can sell swift-handling SUVs all day long, but small, rear-wheel-drive coupes are the company’s soul. We’ve been disappointed with the current-gen 3 Series, yet the 2 Series reminds us that BMW still builds the sort of cars that made it famous. 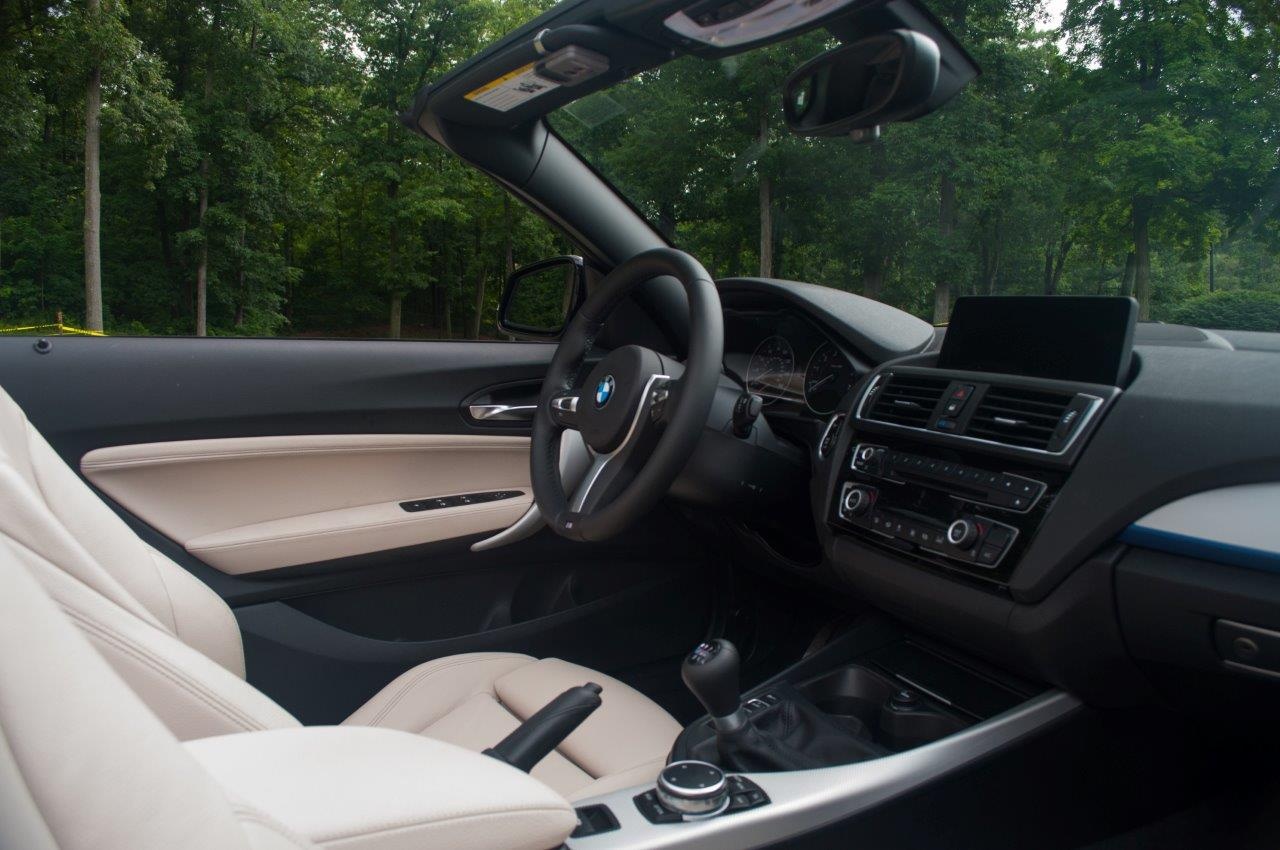 Compared to the stubby 1 Series—which in other world markets was sold as a more handsome hatchback—the 2 Series is pleasing, clean, and reserved. It looks like a BMW coupe did 20 years ago with the same box proportions, only rounded off. For 2016, it gets minor changes. For the 228i, BMW deleted the Sport Line trim and made its blackened appearance and sport seats standard. A new Luxury package adds chrome, and the M Sport package brings a sport suspension and more aggressive bumpers. All-wheel drive is now available for the M235i Convertible, and all M235i models now get most of the former Premium package (keyless entry, garage-door remote, satellite radio, auto-dimming side-view and rear-view mirrors) as standard.

While there are sleeker, faster BMWs that’ll impress (in order: M4, M6 Gran Coupe, i8), the 2 Series does not. Our M235i Convertible, however, put on airs with its beautiful Estoril Blue Metallic paint over cream Oyster Dakota leather and gray 18-inch rims covering matching blue brake calipers. Silver mirror caps and black exhaust tips added a touch of vanity. But if you desire attention, you’ll want to spend $54,745 on a new Corvette or a lightly used Boxster. The 2 Series blends in with every other 3 Series roaming the streets. The reward comes from behind its thick steering wheel. 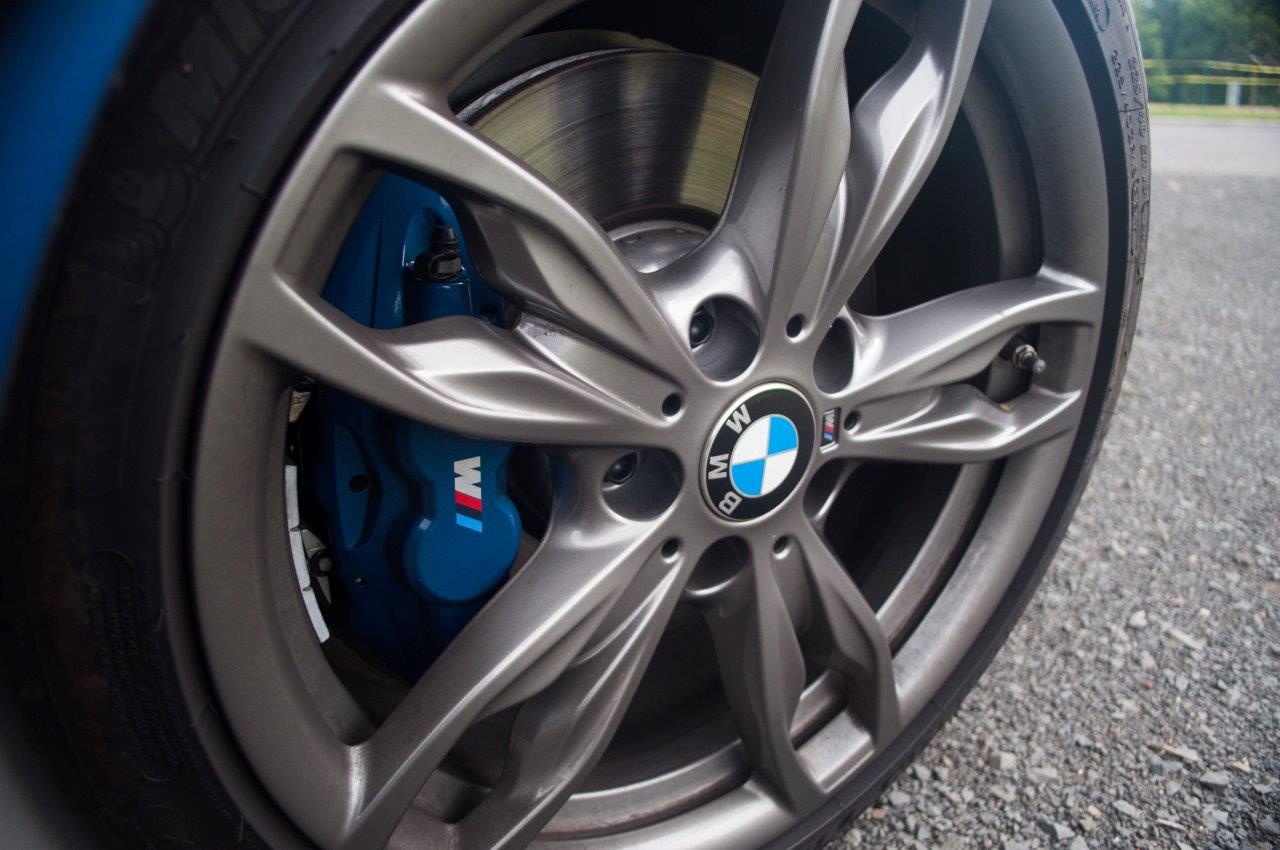 The 2 Series comes as either a 2-door coupe or a soft-top convertible. Rear-wheel drive and an 8-speed automatic are standard; the 6-speed manual in our test car is a no-cost option. All-wheel drive (or in BMW parlance, xDrive) offers rear-biased traction yet cannot be paired with the stick. The 228i has a 2.0-liter twin-power turbo 4-cylinder with 240 hp. It’s a decently quick engine, yet at idle there’s a diesel-like clatter from the high-pressure fuel injectors and really, what’s a classic BMW without a straight six? That’s what the M235i delivers in spades. Its turbo 3.0-liter 320-hp six is perfection: buttery smooth, incredibly punchy throughout the rev range, and an acoustic delight.

Even with the convertible’s added pounds, the M235i (not quite an M2, which is coming next year) is plenty fast. The clutch is a beginner’s joy—there’s so much low-end torque that feathering the throttle isn’t needed—yet it brings the skilled driver great feel and easy heel-and-toe downshifts. We also tested an M235i xDrive coupe, and the only difference is the automatic’s ultra-quick shifts and the hardtop’s greater chassis rigidity, which is slightly lost in the convertible. The electric power steering that feels artificial in the larger 3 Series is dialed straight into the road. Reaction and boost feel natural, and when tossed, the 2’s balanced 50:50 weight distribution and short wheelbase make for eager, sharp, and neutral handling. Selectable driving modes firm up the dampers and steering weight without sacrificing ride quality. But in Sport+, the throttle gets too jumpy, and the stereo plays fake engine noise—a distraction from the exhaust baffle opening at high revs, which lets out the engine’s real music. Avoid that setting and find an open road. The 2 Series is so much fun. 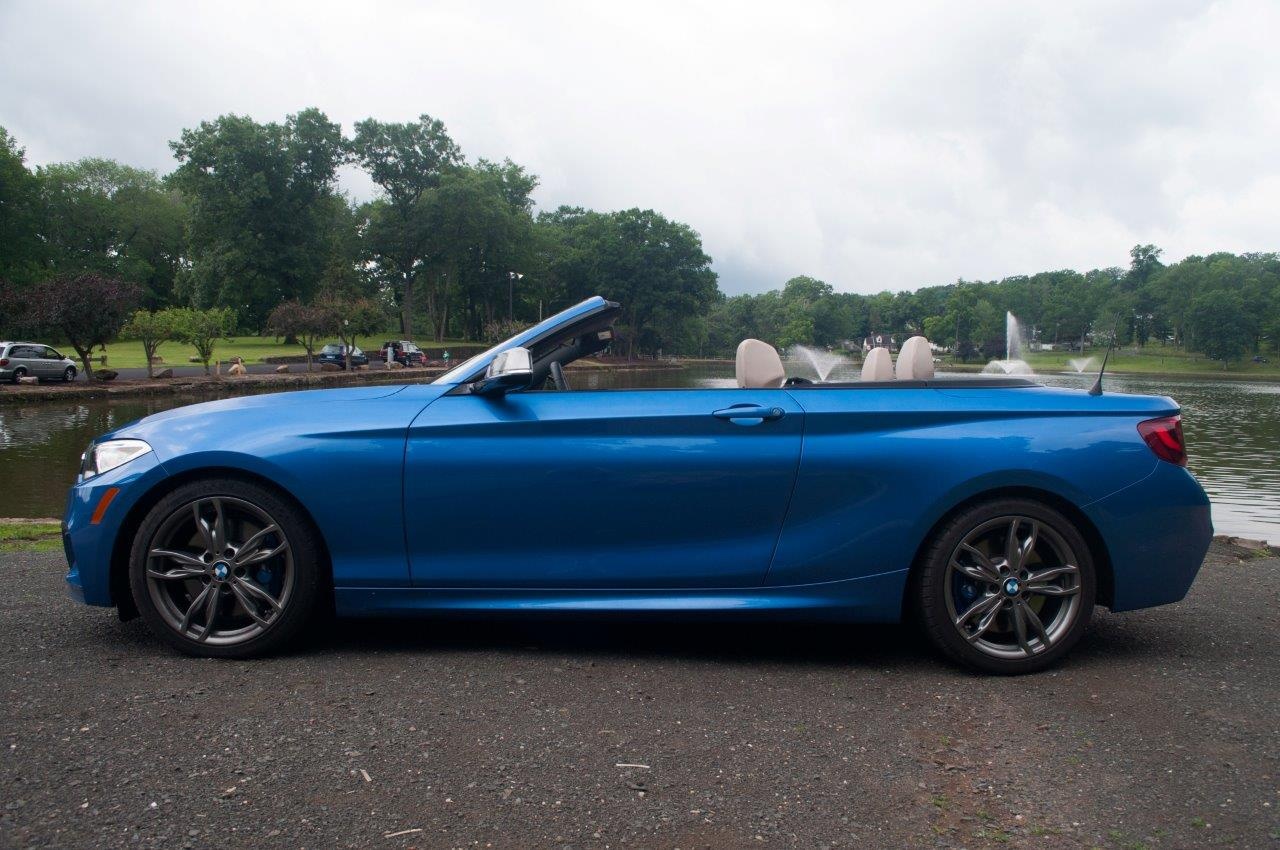 Typical of BMW interiors, the 2 Series' is plain and simple. Radio presets, climate controls, and all instrumentation are easy to view and operate. At night, the amber backlighting makes us nostalgic for past BMWs. The car’s slim proportions, crank handbrake, and even the typeface of the two-gauge cluster reminds us of the cute, early-'90s 325i convertible. The power top raises and lowers in about 20 seconds, including at low speeds. And even with the roof up, the 2 Series is never cramped, although only a dog or a few bags of groceries will fit comfortably. Interior materials are mostly top-notch, but hard, cheap plastics dot the lower recesses of the center stack and doors. While this may be acceptable when starting out for a base $33,845 228i coupe, BMW should consider an upgrade when buyers fork over 50 grand. The wide color LCD isn’t a touchscreen, yet the iDrive interface (with its multi-axis controller and hard buttons) is one of the easiest infotainment systems on the market to use. 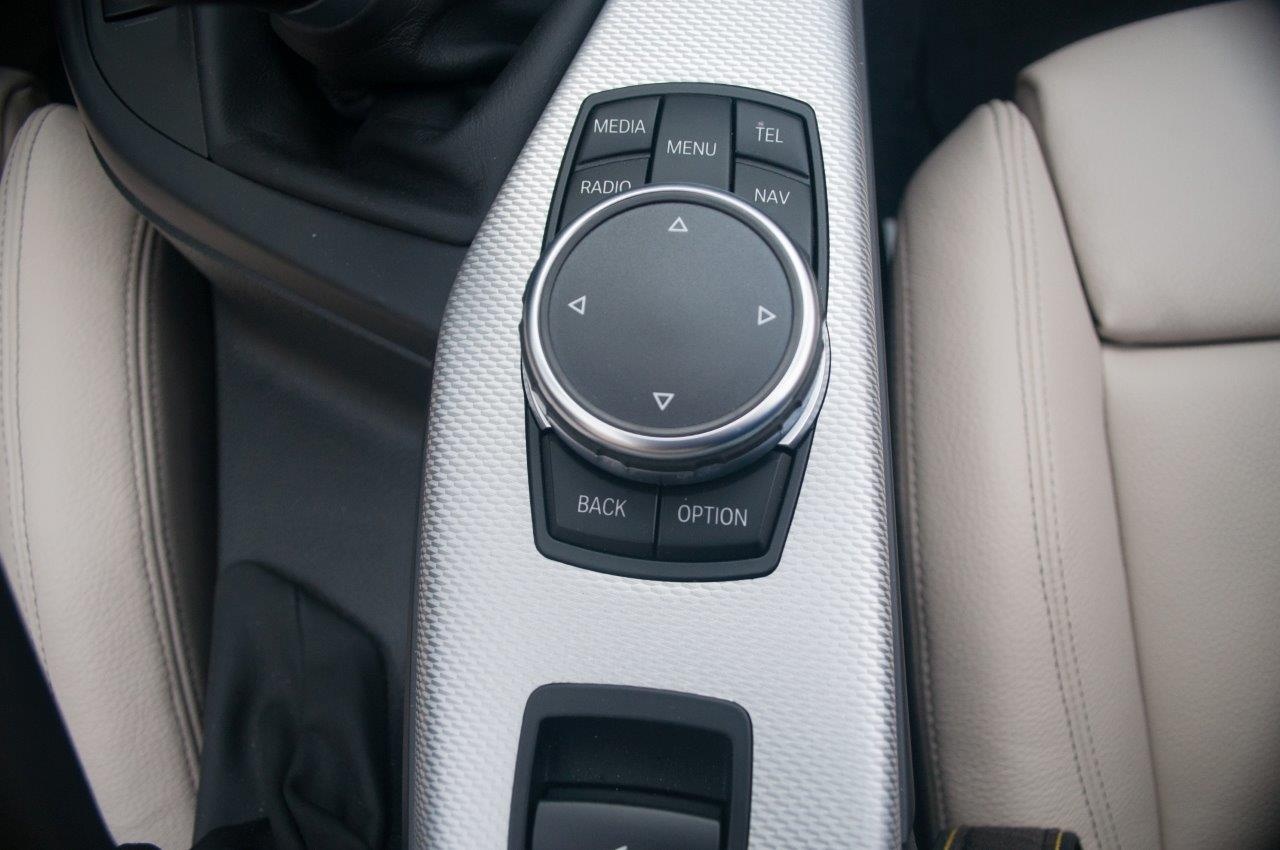 Our car had the Technology package ($1,950), which brings navigation with an extended digital display for the instrument cluster, traffic overlays, telematics services such as stolen-vehicle tracking and remote unlock, and Google search for the nav, among other onboard apps. We also had the Driver Assistance package ($950), which is a fancy way of charging extra for a backup camera and ultrasonic parking sensors. The Driver Assistance Plus package ($700) requires the Technology package and bundles forward-collision alerts, auto-braking with pedestrian detection, lane-departure warning, automatic high beams, and speed-limit info. An auto-parking system ($500) can parallel park for you, but it’s more troublesome and less accurate than a pair of sharp human eyes. Convertible drivers in cooler climes should spend $700 on the Cold Weather package, which heats the front seats and steering wheel. In the 2 Series, this is just enough technology to stay current without detracting from the driving experience. 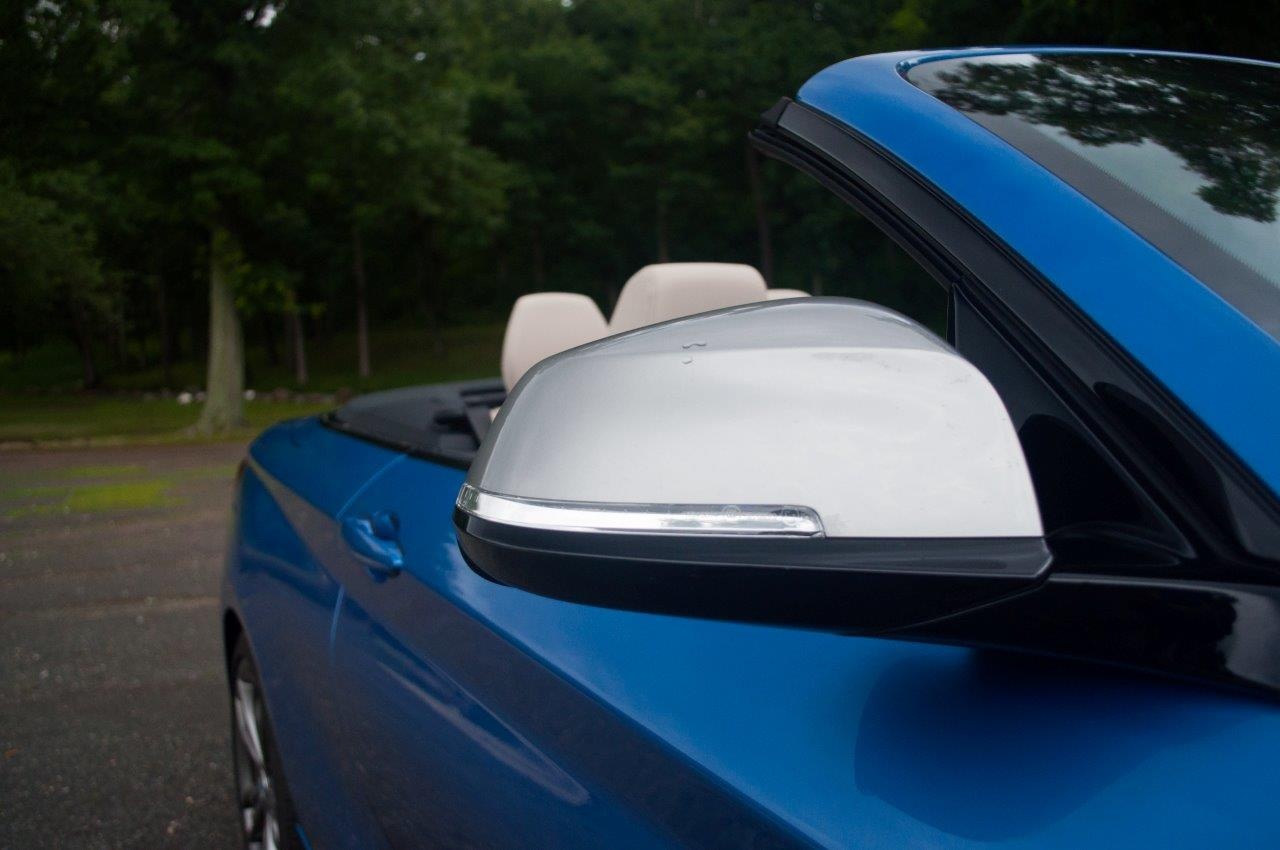 The 2 Series coupe is a 2016 Top Safety Pick+ by the Insurance Institute for Highway Safety, which means it aces all crash tests with the highest ratings—a feat not all luxury cars (nor even the 3 Series) can match. The National Highway Traffic Safety Administration has not tested the 2 Series. Head curtain airbags are not included on convertibles, but can be found on all Mercedes convertibles and the discontinued Volvo C70. Otherwise, driver and passenger knee airbags align with the usual side and frontal airbags. BMW’s brakes are fantastic and hold the car still when taking off on hills, plus they automatically dry the discs in the rain. 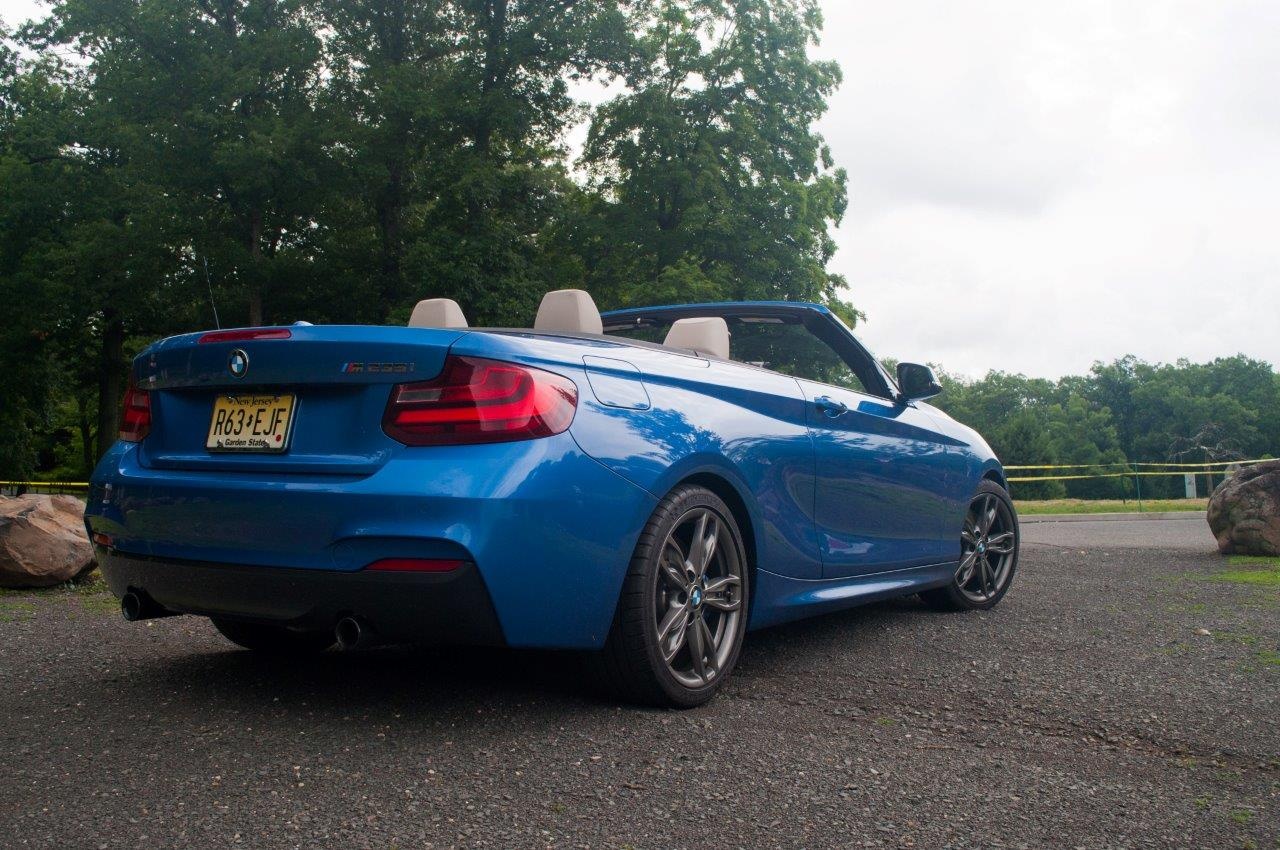 BMWs don’t offer much comfort for the money, which is why BMW dealers always order cars with options that are otherwise standard on non-luxury cars (like heated seats, for example). The 2 Series is not a good value as a luxury car, mostly because it doesn’t look like one at all. But for driving pleasure and the associated status of driving a BMW—those kidney grills still say “success”—the 2 Series is hard to fault. Not even other BMWs offer the driver such distilled and accessible thrills on an open road. And not many sports cars can drive so effortlessly in traffic. You’ll pay for the BMW refinement and reserved styling that’s still unique among waves of newer, flashier cars. Unless you’re okay with the 4-cylinder 228i, we’d recommend a used M235i on factory warranty for maximum pleasure per dollar.

Deepak The BMW never falters on its promise of being the “driver’s car”, and this 2 Series is just another splendid iteration of that vow! When it comes to safety and driving pleasure no other ordinary car brand can ever measure up with a Bimmer, so undoubtedly, it must a sheer fun to dart around on its mighty roadster version with the top down on country roads or chaotic city traffic. Hopefully it is also well-equipped to handle the gust while going flat out on freeways or Autobahns; cos certain roadsters can give us a dreadful bad time without an additional wind deflector installed, especially while on lead foot. In my case, my Nissan roadster had to be mounted an additional wind blocker named Windblox or something to chuck out the turbulence.

bogush I just bought a 228I Xdrive - is there a compartment for CD's if so where ?

Brent I went the route of purchasing a Preowned BMW M235i with the factory warranty. Its a great car and with a few M-performance modifications gets the attention that it deserves when you want it to.

HAD AN OFFER ON MY B.M.W. BUT HAVE NOT HEARED ANYTHING MORE FOR OVER 7 DAYS...

NEED TO KNOW IF MY B.M.W. IS STILL BEING LISTED AS FOR SALE HAD EXCEPTED OFFER BUT NOT HEARED BACK FOR 7 DAYS PLEASE LET ME KNOW WHAT THE STATUS IS PLEASE

Did You Get My Verification On The B.M.W. ?

did you receive my car verification ?