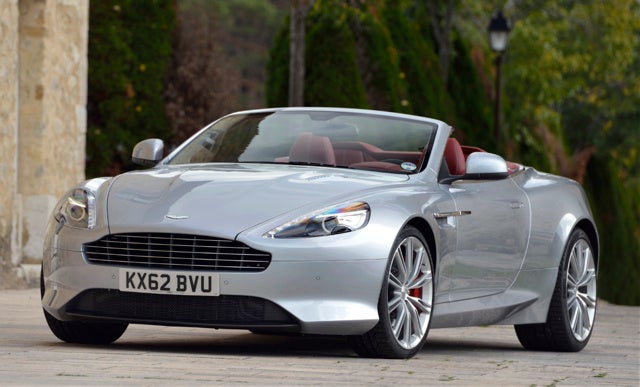 Traditionally among the most exotic of grand touring automobiles, Aston Martin’s DB9 luxury coupe now comes in GT and a special limited-run GT Bond Edition trims, both with a number of styling upgrades for 2016. The DB9 Volante convertible also returns for the upcoming model year, and all trims include Aston Martin's AMi II infotainment system.

Featuring a 2+2 seating arrangement, the DB9 allows plenty of front seat head- and legroom, but the rear seats once again defy the average adult to find a comfortable position. The coupe trims offer 5 cubic feet of trunk space, and the Volante even less, as it needs to stow its fabric convertible top somewhere (unless you decide to delete the Volante’s rear seats in favor of more cargo space).

The 2016 DB9 GT and GT Bond Edition get an extra 30 hp out of the standard 5.9-liter V12 powerplant, for a total of 540 hp, managed by the traditional 6-speed shiftable automatic transmission to the tune of 13 mpg city/19 highway/15 combined. The Volante still packs the V12 with the original 510 hp and 457 lb-feet of torque, also managed by the 6-speed shiftable automatic; it can be alternately equipped with an available Italian-made 6-speed manual transmission, something that should find immense favor with both reviewers and fans.

Furthermore, the 3-stage dampened suspension again provides this handsome Aston with some impressive handling characteristics. The coupe's well-insulated cabin and the Volante’s tightly knit convertible top help keep out unwanted wind noise while still allowing those sweet notes from the V12 to filter through.

All 2016 DB9 iterations feature a new steering wheel design, with each of the coupes also debuting an optional microsuede-wrap for the steering wheel. Other cabin features for the coupes include upgraded leather upholstery for the heated, power-adjustable front seats, and enhanced Bluetooth-integrated AMi II infotainment technology with a new touchscreen display.

Options for the DB9 include the popular Carbon Edition on both the GT coupe and Volante, featuring carbon black or white exterior colors and extra carbon-fiber interior accents.

Have you driven a 2016 Aston Martin DB9?
Rank This Car