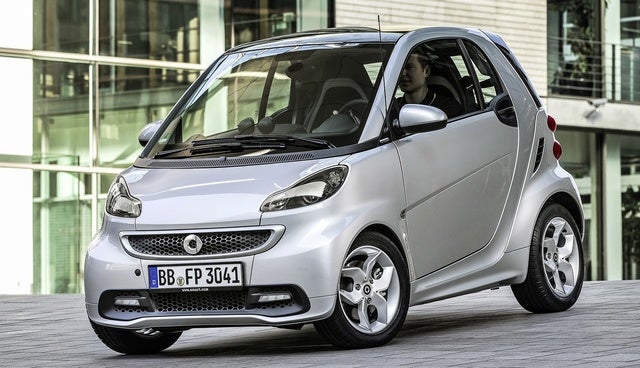 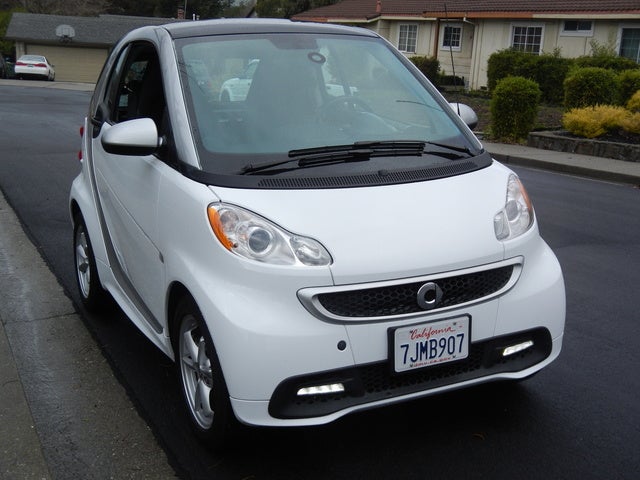 For such a pint-size commuter car, the 2015 smart fortwo is generating some full-size buzz. The redesigned and re-powered third generation of this 2-seat ultra-subcompact city slicker is set to debut in foreign markets for the 2015 model year, but U.S. showrooms won’t get it till the 2016 model year, and even then it remains doubtful that the colonies will enjoy all the upgraded engine and transmission choices scheduled to grace foreign trims. Hey, tell it to the folks at smart’s parent company, Daimler-AMG.

So anyhow, what you can expect in the contiguous 48 (plus Alaska and Hawaii) for 2015 is a smart fortwo that still seats 2, still comes in hatchback (coupe), cabriolet (convertible) and electric-drive variations, and still offers 2 trim levels, the basic “pure” in coupe/hatchback form only, and the up-featured “passion” in coupe/H.B., cabrio or electric-car form. And by the way, because the folks at smart have issues with capital letters in marketing distinctly un-capital automobiles, you’ll have to pardon the liberal use of quotation marks.

In any case, Yankee-Doodle-Dandy-destined 2015 fortwo versions will return with some 7.8 cubic feet of trunk space, even in rag-top cabrio versions. This cozy cargo carrying capability is again bolstered somewhat by a standard fold-flat passenger seat.

Also for us here in the States, the 2015 fortwo, offered only in rear-wheel-drive (RWD) configuration, will return the “pure” and “passion” editions, toting the single 1.0-liter inline 3-cylinder engine, with its standard 5-speed auto-manual transmission managing 70 hp and 68 lb-ft of torque. Mileage numbers, therefore, will remain a heady 34 mpg city/38 highway. The up-featured “passion” hatchback and cabrio, it should be noted, pack standard steering-wheel-mounted paddle shifters that are deleted in the electric trim’s unique transmission setup.

Said fortwo electric trim returns to domestic dealerships boasting a plug-in 55-kilowatt electric motor and direct, single-speed transmission that put out a continuous 47 hp and 96 lb-ft of torque. A “burst mode,” meantime, allows spurts of 70-hp acceleration, but the stated range of 68 miles from the 17.6kWh lithium-ion battery will be cut significantly should the need for speed overwhelm the need to just get there. Oh, and the 240-volt charging system necessary to juice the fortwo electric up to full capacity again costs extra.

A trio of engine offerings touted for the upcoming Eurasian smart fortwo, interestingly enough, no longer includes the above-mentioned plug-in electric variant, leading one to conclude that when this third-gen pint-size urban warrior hits American shores, it’ll likely be only in gas-burning garb. And by the way, a 5-speed manual transmission that’s slated to be available in offshore editions may not make it across the pond either, leaving only a new 6-speed auto-manual gearbox to manage U.S.-designated variants.

Teaser alert! Non-U.S. residents can look forward to more than just a revamped drivetrain lineup for 2015, including a new 60-hp base powerplant, as well as a turbocharged 900cc engine. Also, a slightly beefier profile is featured in next year’s foreign-addressed third-gen fortwo, as are a wider stance, improved suspension components, standard Crosswind Assist, a new grille design, standard LED taillights and a couple more available safety offerings, like lane-keeping assist and forward-collision warning.

Users ranked 2015 smart fortwo against other cars which they drove/owned. Each ranking was based on 9 categories. Here is the summary of top rankings.

Have you driven a 2015 smart fortwo?
Rank This Car

Are The High Beams The Only Option To Use When Driving At Night. The Other...

When driving at night, I noticed that other drivers are flashing at me. I don't see any other options but to use the high beams at night.