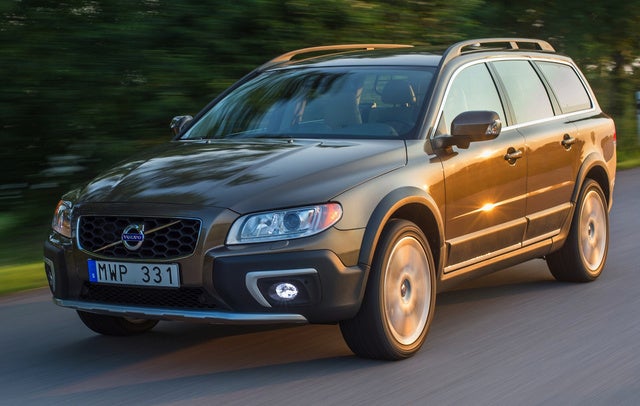 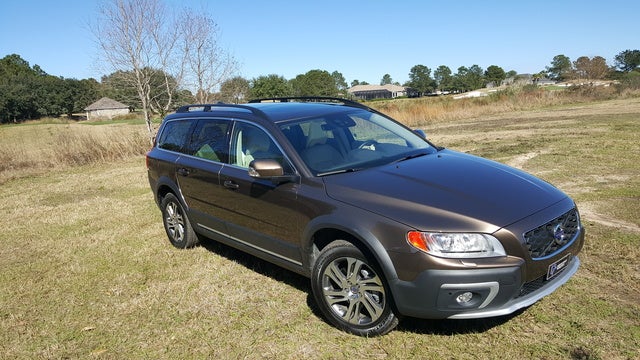 Those for whom a full-size sport ute, or even a crossover ute, may be just a little too much ought to take a look at the 2015 Volvo XC70 wagon. A mild cosmetic and feature refresh for this posh 5-passenger midsize wagon in 2014 is complemented in 2015 by a brand new turbocharged Drive-E powerplant along with a new 8-speed automatic transmission. This debuting base engine outpowers the normally aspirated 3.2-liter inline 6-cylinder (I6) as well as offering significantly better fuel economy.

With the debuting powertrain, now offered in all 2015 Volvos except the C90, comes a new base trim designation, the T5 Drive-E which, alas, comes only in front-wheel-drive (FWD) configuration. The midlevel 3.2 AWD trim, however, returns with the traditional non-turbocharged I6, while the turbocharged T6 AWD remains the flagship trim. Each of the latter trims, obviously, packs standard full-time all-wheel drive (AWD) for a little added confidence during those snow-shrouded commutes.

Up against such rivals as the Audi Allroad or the Subaru Outback, the XC70 lineup offers a little more passenger room, some added cargo area (72.1 cubic feet with the rear seats folded) and, with the introduction of the Drive-E powertrain, at least comparable fuel economy. Bear in mind, however, that the Audi flaunts a classier profile than the XC70, while the Outback is more backwoods capable.

Anyhow, the new-for-2015 turbocharged 2.0-liter inline 4-cylinder (I4) Drive-E engine mates with an 8-speed shiftable automatic transmission, allowing the T5 Drive-E to put down 240 hp and 258 lb-ft of torque. Gas mileage is improved to a healthy 24 mpg city/31 highway, while Swedish-bred/Chinese-owned Volvo claims this competent wagon will tow up to 3,500 pounds when properly equipped.

As mentioned, the 3.2 AWD trim returns packing the traditional 3.2-liter normally aspirated I6 engine, along with its tried-and-true 6-speed shiftable automatic. Look once again for 240 hp and 236 lb-ft of torque from this so-so straight-6, with AWD-tempered mileage running 18/26. But towing capacity remains 3,500 pounds, according to the folks at Volvo.

The top-of-the-line T6 AWD, meantime, returns with a peppy 3.0-liter turbocharged I6 powerplant, accompanied by the ubiquitous 6-speed shiftable automatic transmission. The standard version of this blown 6-banger throws out 300 hp and 325 lb-ft of torque, with an available Polestar Performance upgrade tweaking an extra 25 hp and an added 29 lb-ft of torque out of that same powertrain. Mileage with the standard turbo I6 remains 17/24 and towing once again maxes out at 3,500 pounds.

Though Volvo’s XC70 is often considered an also-ran among high-end wagons, the 2015 edition nevertheless boasts some eye-catching standard appearance bling, not to mention a slew of interior features that’ll promote pampering of all but the most demanding of passengers. For example, the T5 Drive-E and the 3.2 AWD each sport 17-inch alloy wheels, a roof rack and heated power-adjustable mirrors outside, with cloth upholstery, a power-adjustable driver’s seat with 3-way memory settings and full power accessories adorning the inside. Cruise control is standard throughout the 2015 XC70 lineup, as are telescoping tilt-wheel steering, leather and alloy cabin inserts, Bluetooth hands-free communications and dual-zone climate control. Additionally, all XC70 iterations boast a 200-watt audio system with a single-CD player, 8 speakers, satellite radio and auxiliary iPod integration, all interfaced and accessed via a 7-inch dashboard display.

The Premier Package remains optional in the lower trims, while all trims can be delivered with the available Premier Plus Package featuring all the Premier stuff and adding in a fold-flat front passenger seat, adaptive TFT display, power liftgate, remote garage door opener and front and rear parking sensors, not to mention a rear-view camera. The Platinum Package, also available to all XC70 trims, throws in navigation and a 12-speaker audio system with DVD capability, while the Climate Package adds heated front and rear seats and a heated steering wheel, as well as an interior air quality system.

XC70LCLX Had my 2015 XC70 T6 AWD for 3 months now, put 3000 miles, local driving, two long distance trips. Incredible car overall, it just conveys the message of COMFORT, SOLIDITY, PERFORMANCE and sensory satisfaction. 1) the door feels heavy and shuts heavy, love it 2) the seats has very nice density and resilience, also nice support and size 3) the audio system and feeling of immersion is second to none, better than BMW 14 speakers or Benz or JBL or Mark Levinson, it's ALL ABOUT ENCLOSURE AND IMMERSION, not about power or number of speakers. The bass feels it's in your heart from any seat, rich, warm, deep, highs are clear. Most other cars get the feeling of sound coming out of the door or dash, with Volvo, you can't tell where the sound comes from. 4) the wagon weights over 4000lb, feels heavy, like a tank, medium weight steering adds to it 5) acceleration and high speed handling amazing, superb road trip car. 6) two main downside, gas guzzler town driving, but amazing range at high way, very interesting, the range can be from 250 to empty, or 500 to empty! Body roll, but can be getting used to.

Users ranked 2015 Volvo XC70 against other cars which they drove/owned. Each ranking was based on 9 categories. Here is the summary of top rankings.

Low Tire Pressure Light Will Not Shut Off

Had a flat tire several weeks ago. Garage found nail and fixed it. Two days ago I was going home from the store and low tire pressure light came on. Went to same garage. They claimed they fixed it an...

Why Doesn't My Volvo Show Whether Price Is Good Deal Or Fair Deal Etc.

I am listing 2 cars. On the buick is shows my price is a good deal. On the volvo is doesn't indicate anything whether good, fair or whatever. Why?

Am Getting A Message On Dash Of 2015 Xc70 Wagon: "low Battery Charging"

Was standing with door of car open, chatting with neighbor, car not running. Got a message on the dash "low battery charging" - anyone know what that indicates?