The seventh-generation GTI arrives with more power, more room, a new chassis, and a tighter suspension. 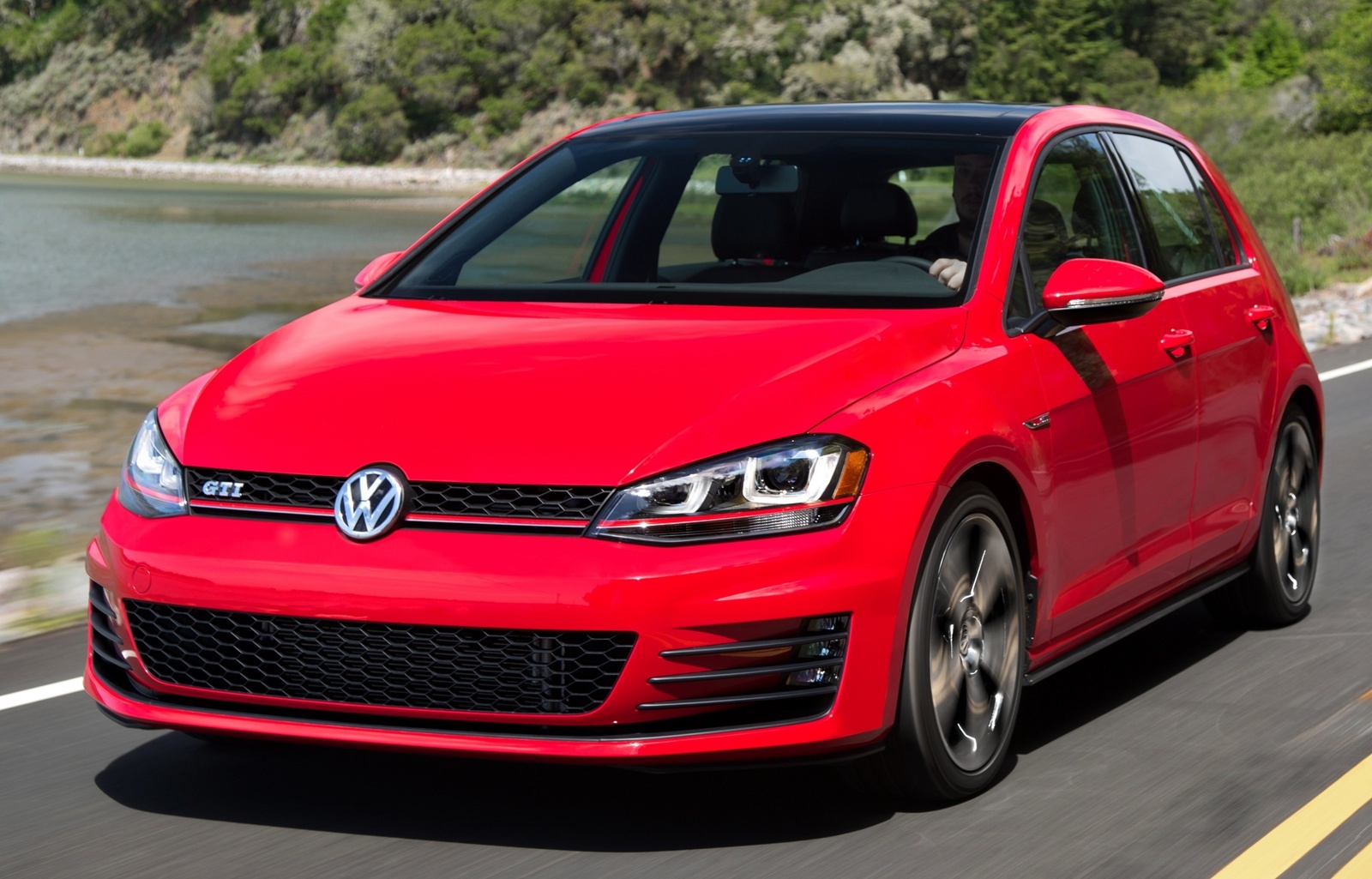 It’s been more than 40 years since the “original hot hatch” squealed onto the scene and rewrote everyone’s perceptions of what an economy car can do. Now in its seventh iteration, the GTI returns with a big bump in power, a new chassis, and some revised suspension tuning to try and best its own records. 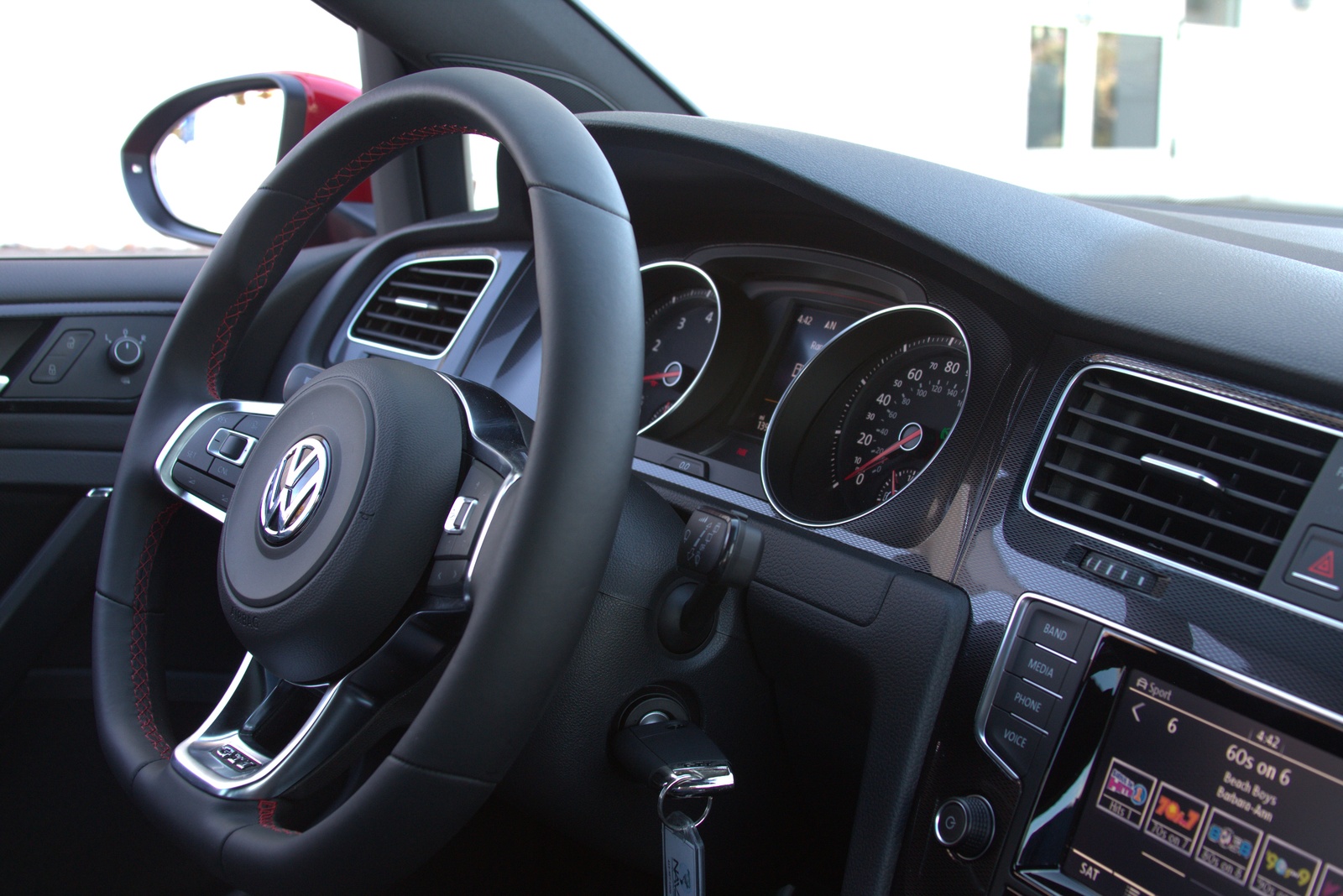 The Golf is one of the few cars on the road that's remained recognizable over 4 decades. It’s on a short list with iconic vehicles like the MINI Cooper, the Mustang, the Beetle, and the 911, but the GTI gets special consideration, as it’s the only one on the list that’s a performance version of an existing vehicle. The now-legendary red stripe and plaid interior have a visual reach that goes far beyond gearheads and tuners, partially thanks to the GTI’s real-world usability and versatility that the rest of the list finds hard to match. Sure, it can't beat the Porsche on the track or the Mustang at the strip, but try to take 4 adults on a grocery run in a 911.

After a few years of losing its way, the GTI seems to have recovered and managed a return to form. Things are very much improved all around for this next generation. Think larger. Think lighter. Think nicer, and think more capable. The new GTI is all of those things, and despite a few small preferential grievances, it’s hard to find something to be disappointed with here. It’s fast enough to be fun and can still haul your bike with the rear seats folded.

I spent a week driving a base S trim (the only trim available with the iconic plaid interior) painted in Tornado Red, a refreshingly free paint option. A 6-speed DSG double-clutch transmission and 18-inch summer tires were two more no-cost options, which means my GTI came off the lot with only the $820 destination charge added to its $26,095 MSRP. 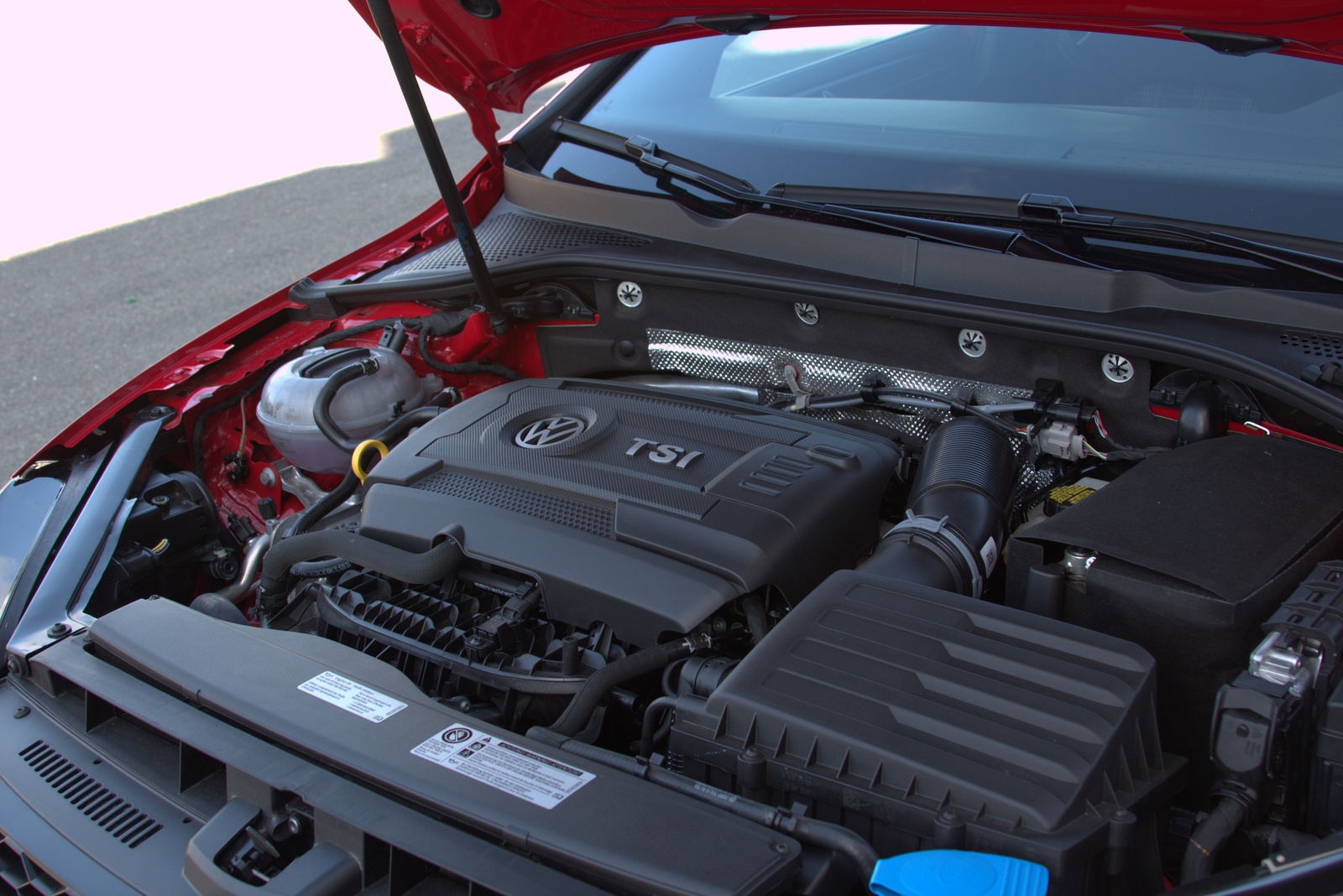 Performance is part of the GTI formula. It simply wouldn’t exist if VW was not keen to make a performance version of its Golf. And while early GTIs would struggle with 1.8-liter engines that could barely break the 100-hp mark, today’s version is turbocharged and offers more than twice that. For 2015, the number is 210, with 258 lb-ft of torque to match. Those numbers represent a 10-hp and 50-lb-ft increase over the previous version's output, and if you’re game for spending a bit more for your GTI, a $1,500 Performance Package will add another 10 hp as well as larger brakes and an electrically controlled mechanical differential. That means you get to push buttons inside that decide how grippy or slippy those front tires are, especially through the turns.

It’s a funny thing, because that’s great for the GTI (how could you argue otherwise when it’s a feature that brings better performance and safety?), but somehow it feels a little off. Part of the GTI's magic was its ability to rip some rubber through a turn or even off the line, and for that to go away seems a shame. At any rate, my GTI wasn’t so equipped, and I had the pleasure of watching the little stability- and traction-control warnings flickering away as the car struggled to put the ponies to the pavement all week. As it should be.

With 4 doors, the DSG transmission, and no Performance Pack, my GTI managed to hit 60 mph in a little over 6 seconds. A 2-door GTI equipped with the manual transmission, plus the extra power and better diff of the Performance Pack, would manage to get to 60 in well under 6 seconds. And while VW claims the DSG automated manual can shift quicker than any human, I found it a ponderous addition to an otherwise spritely car. It was slow to respond to accelerator input, even when Sport Mode was engaged, and it took a frustratingly long time to push the revs past 4,000, where that 2.0-liter turbocharged engine just loves to sing.

Oversteer can be achieved easily and remains a controlled affair even to the point of lifting a rear wheel. Just push it hard and check your mirrors for smoke behind you. But you’ll struggle to find any legal speeds at which the GTI performs that hoonishly, because it's so composed through the turns. It’s been a few years since I’ve driven a GTI, so my comparison is fuzzy, but I don’t remember the GTI being quite so restrained, quite so solid. In fact, I was a bit disappointed until the first time I lit up a tire, worried the GTI had become too low key.

One complaint I can see people putting forth is that the ride can get a bit stiff, especially over less-than-smooth pavement. The 18-inch summer tires with their shallow sidewalls certainly contributed to this, and optional all-seasons should alleviate that stiffness quite a bit. There’s also an $800 adaptive suspension with its Comfort Mode, more proof that the GTI can be nearly anything you want it to be. But I predict that VW will soften this suspension in the coming years. Stay tuned.

EPA ratings peg the GTI at 33 mpg highway/25 city/28 combined, but I guess we’ll have to wait for the VW scandal to see if that’s to be believed. I can tell you that in a trip down to Laguna Seca and back, I was able to easily achieve those numbers (at least according to the computer), and I was anything but easy on the accelerator. 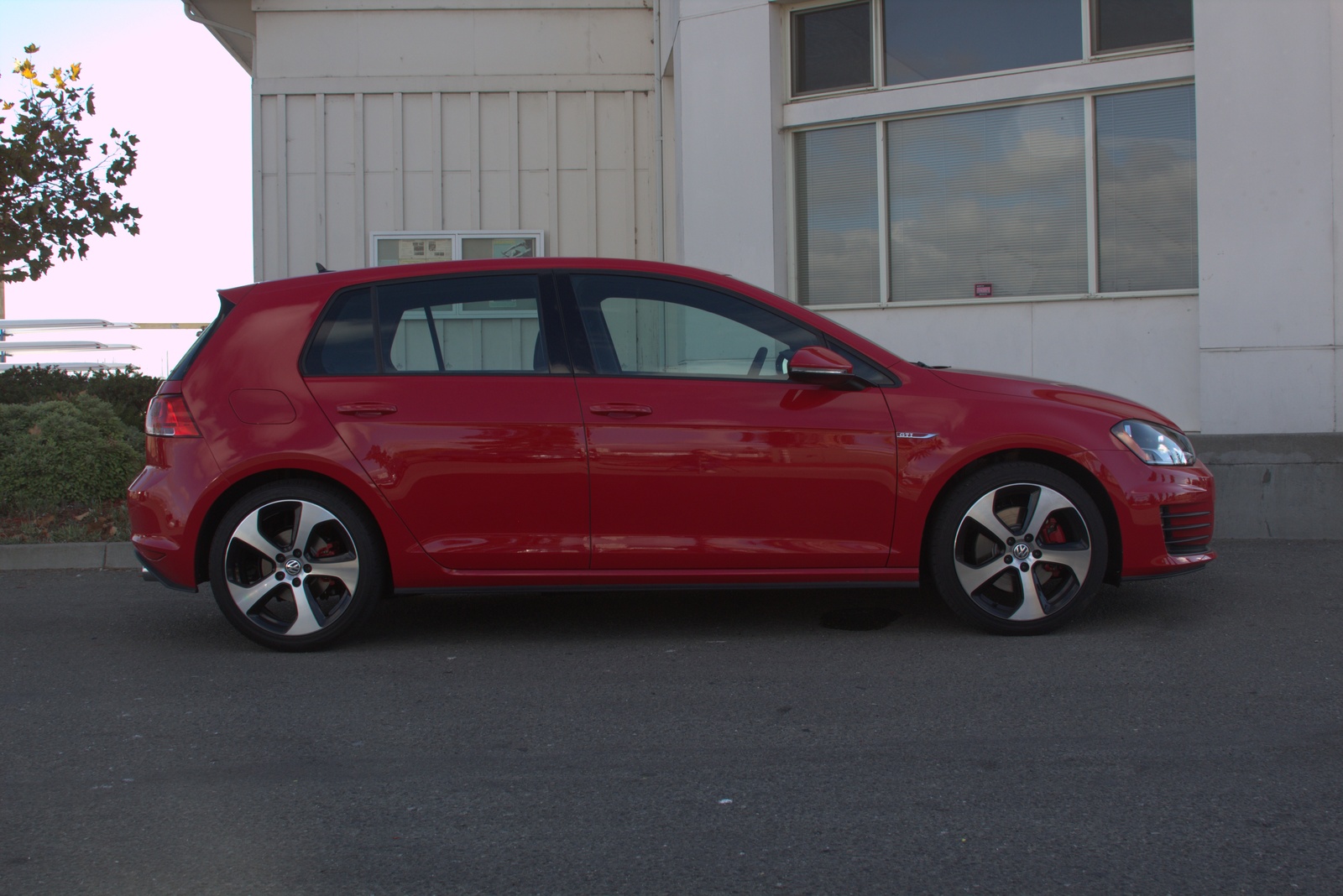 Part of the German movement of constant evolution rather than change for change’s sake, this all-new GTI could easily be mistaken for the previous generation by casual observers. If you’re paying attention, this one is longer, wider, and sports new head- and taillights and a thicker crease along its flanks. The major beneficiaries of this extra space are the trunk and rear seat, something no one should find troubling.

Inside, things have similarly improved with better materials and a tight, functional design. A flat-bottom steering wheel is stitched in red leather to match the seams on the plaid-centered cloth seats. Of course, you’ll have to be satisfied with the base S trim if you want those, otherwise it’s leatherette for the SE and Autobahn trims. Carbon-esque texture is used sparingly, along with gloss black trim and a refreshing sparsity of hard plastic.

Seats are comfortable and supportive, even during the worst hooligan antics you can manage on the street, and there was plenty of leg- and headroom for my 6-foot, 4-inch frame. Perhaps even better, with the rear seats folded, cargo space jumps from 22.8 cubic feet to a class-leading 52.7. 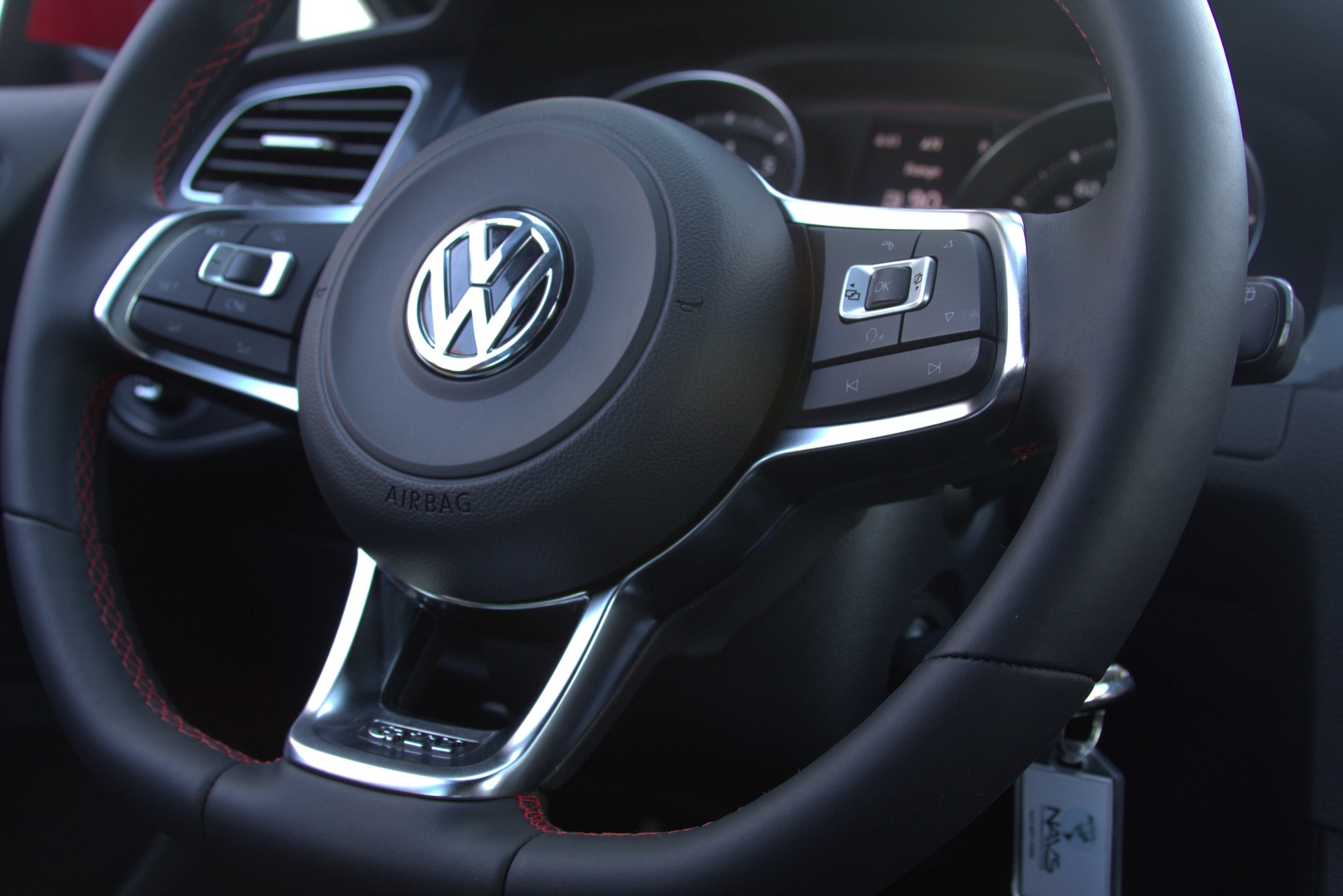 One disappointment with the GTI was its 5.8-inch touchscreen and the accompanying infotainment system. There’s no smartphone integration, which is generally not a feature I crave, but it seems an odd omission for a car in 2015. Additionally, the touchscreen wasn’t entirely impressive with regard to response or resolution, and while it wasn’t enough to really aggravate, it’s also something that VW has already acknowledged, as it’s getting an upgrade next year. Again, this is odd—why debut your next-gen GTI with a system that’ll get an upgrade the following year?

Similarly, I found it hard to believe there were no USB ports to be found, but by the end of the week I had to concede defeat. What I did find was a huge iPhone connector that requires you to remove your phone from its case to use, and I can’t really decide which is more ridiculous.

But otherwise you’re well-appointed, even at the base level. The GTI has heated seats (with power recline in 4-door trims), LED foglights, heated mirrors, Bluetooth, satellite radio, and iPod integration. The SE gets automatic headlights and wipers, keyless ignition & entry, a rear-view camera, and an upgraded Fender stereo, while the special-order-only Autobahn gets navigation, a 10-way power driver’s seat, and dual-zone automatic climate control.

There are several packages available, including a Driver Assistance Package ($1,495) that adds forward-collision warning, autonomous emergency braking, and lane-departure warnings to up the safety factor. In addition, park assist and pilot are included, as well as adaptive cruise control for less-strenuous situations. A $995 Lighting Package gets you bi-xenon adaptive front lights, which follow your turns along the road, and finally the already mentioned $800 adaptive suspension gets you VW’s Dynamic Chassis Control. 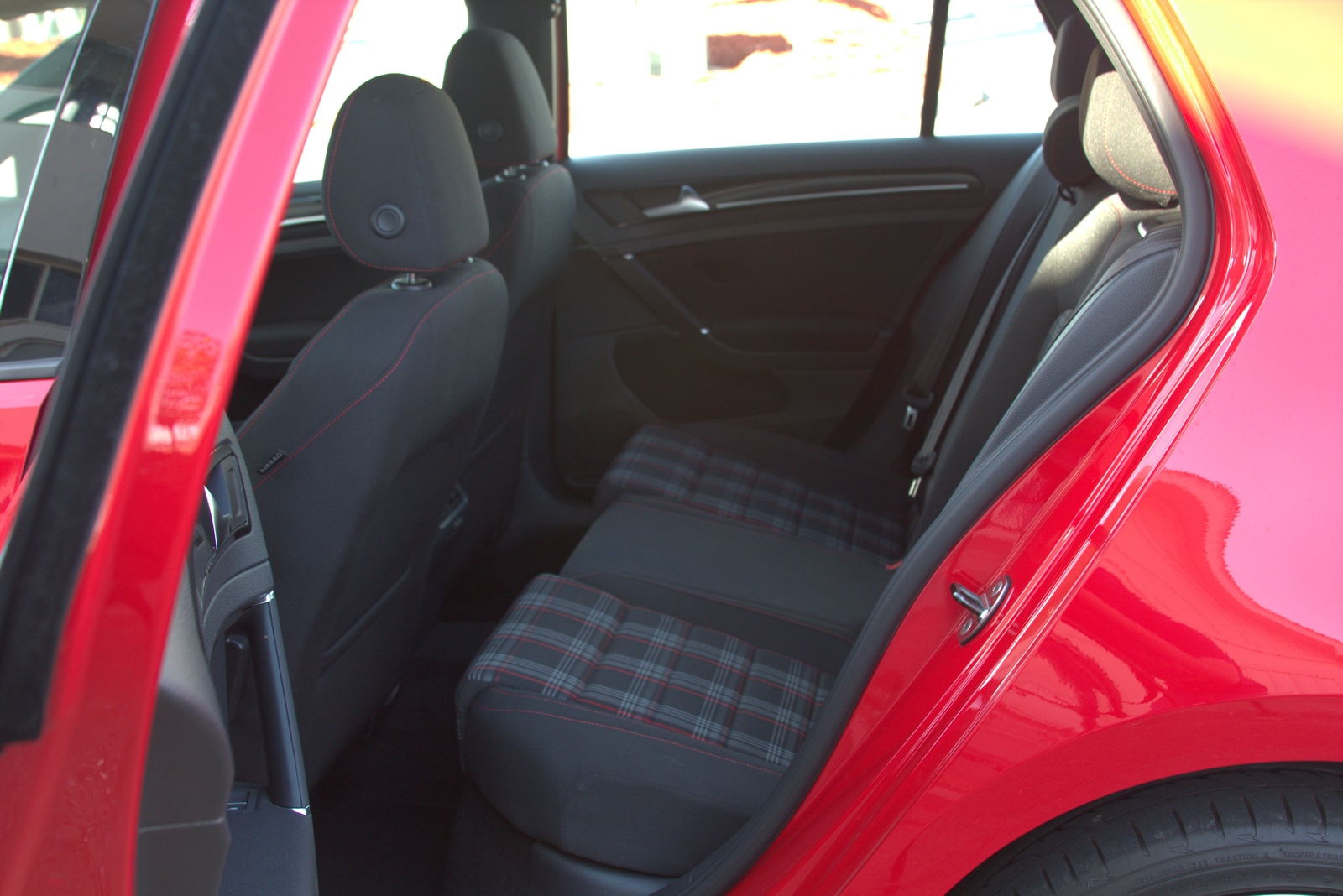 All GTIs come with standard 4-wheel antilock disc brakes with post-crash braking and optional emergency braking, stability and traction control, and front-side, side-curtain, and driver’s-knee airbags. Automatic hill hold takes the tension out of working the clutch, even in the hills of the Bay Area, and VW's Car-Net emergency telematics offer automatic crash notification, roadside assistance, remote vehicle access, stolen-vehicle location, and parental controls. Braking from 60 mph is accomplished in just 105 feet, which is a feat even in the compact category.

The National Highway Traffic Safety Administration has yet to test the 2015 GTI, but the Insurance Institute for Highway Safety awarded it the highest rating of Good in all tests. 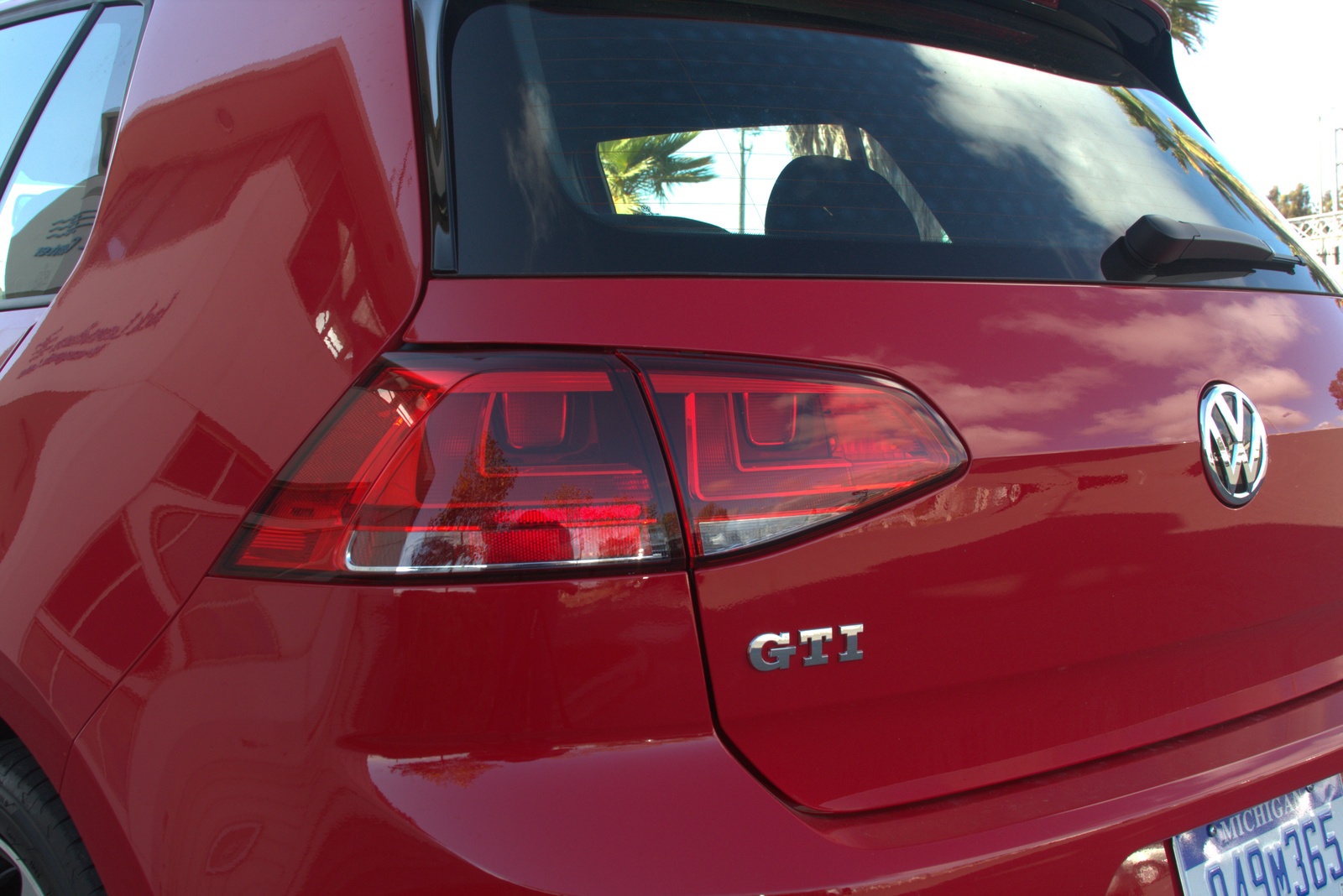 You can drive off the lot in a GTI for less than $25K, and that’s a hell of a deal no matter what you want out of your car. Go for the top trim and all the features, and you’re still just north of 30 grand. There aren’t a lot of cars that can match that, with front-wheel drive being the only drawback I can really claim—and that’s only if you prefer rear-wheel drive from a performance standpoint or need all-wheel drive from a weather standpoint.

My one caveat goes back to the scandals that have struck VW of late. Who knows what models will be implicated next, but even if the GTI isn’t included, I can only imagine prices will be dropping in the very near future.

What's your take on the 2015 Volkswagen Golf GTI?

ejpeck Only car offering the performance, utility of a hatch, and refinement of european engineering at a best bang for the buck price available today, anywhere.

Have you driven a 2015 Volkswagen Golf GTI?
Rank This Car

Did you guys kill private party listings? I go through the whole "sell" sequence and the only option is to press "get your offer", not "upload pictures" or "post ad". What's up? Why not be clear?

Is The 2015 VW GTI IS W/Performance Pkg, A High Maintenance Car?

How Do I Reset Tire Pressure Sensor

If I Replace The Stock Exhaust On My 2015 VW GTI With An Aftermarket Cat-ba...

***Please note I will be moving to California in a few months...and I hear California is crazy with emissions stuff. THANKS!