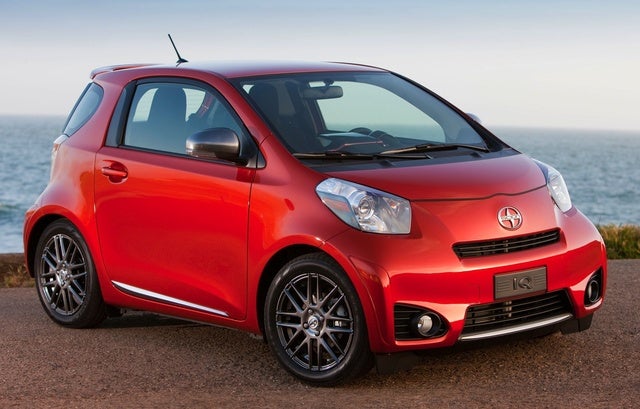 Given its diminutive size of only 120 inches long, you may not see the iQ coming, but for 2015 Scion adds a wider color palette for a bit of flash. Shiny metallic and luscious pearl hues, as well as the blazing hot Lava Red color, are added to the iQ’s lineup for all the attention you could ever want. Also, the Limited Edition Monogram series will receive a special two-tone color option of Black Currant Metallic and Classic Silver to turn this micro subcompact into a true piece of eye candy.

This nimble 3-door hatchback is great for zipping around town and getting through tight traffic, powered by a 1.3-liter inline 4-cylinder with VVT-i (Variable Valve Timing) that makes 94 hp and 89 lb-ft of torque on takeoffs. Mated with a continuously variable transmission (CVT), which is the only option, highway speeds are achieved in just about 12 seconds. Other subcompacts might beat it by 3 seconds, but in this budget range, most trend closer to 14 seconds.

Extended highway driving is not a strong point for this pocket-size car, however, due to pesky road noise and its tendency to struggle to keep up with the flow of traffic. For its class, the iQ also does not quite meet expectations in fuel economy. With a curb weight of 2,127 pounds, a power-robbing CVT transmission and small-output engine, a meager 36 mpg city/37 highway is all you can expect. This falls short of even some full-size automobiles.

The interior of the iQ has a peculiar 3+1 seating arrangement, which means you get 3 full-size seats suitable for adults and the +1 seat located behind the driver, which is too small for adults but perfect for small children, a backpack or grocery bags.

Everything inside the iQ is crafted for quality and to maximize space, given the car’s petite nature. Slimmed front seats, a cleverly re-designed front-mounted differential and flat-bottom steering wheel are just some of the innovations instituted to provide maximum comfort for driver and passengers. Rear cargo space is quite limited though, at only 3.5 cubic feet, which is hardly enough space to fit most laptops, but you can fold the rear seats down for an increase to a little more practical 16.7 cubic feet.

Being the smallest vehicle in Toyota’s fleet, the iQ was born from the 2008 Toyota iQ and rebranded under the Scion emblem in 2011, introduced as the rival to the Smart Car. As such, only two trims are available, which are the feature-loaded Base, including standard features like air-conditioning and Scion’s ECO drive indicator to optimize fuel efficiency, and the two-tone limited-edition iQ Monogram Series.

The iQ’s appeal lies in its ability to easily whisk through traffic and urban streets with ease, and it's perfectly suited to high-population areas with the convenient ability to not have to pass up any parking space. A wide stance and 16-inch wheels give the car a presence in handling and will impress you while throwing the iQ into twisty corners. The MacPherson strut front suspension and torsion bar rear suspension gives a much better ride quality than most cars with similar dimensions, too.

Bold style and compact design make the Scion iQ the perfect fit for someone living in a large city that has narrow, traffic-laden streets and parking spaces that are always hard to find. You won’t be impressed with the fuel efficiency. However, your friends will marvel at how you can amazingly perform a U-turn just about anywhere. Sadly, there seems to be little interest in the United States for micro subcompacts, so according to reports, 2015 may just be the last available year to buy a new iQ.

eatinsnatch Great little car, easy to manuever and drive, you actaully will start laughing when you drive it as its like driving a washing machine. I have the pearl white 2014 edition and his name is "Buddy". The only thing I dont like is that it does fight headwinds which make it work harder to drive down the highway. Even me driving along the jighway from 70-80mph is still avg 40.3mpg. I bought the car with only 18,000 miles from an older lady trading it in a a Toyota for a prius. These little 1.3 litre motors dont breal in before 30,000 miles. Just keep changing the oil with the recommended synthetic and it will run for a long time.