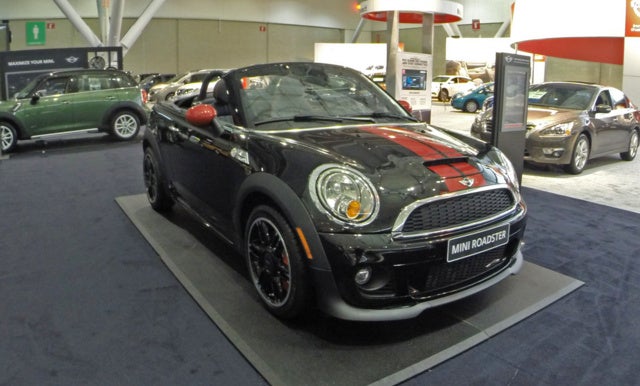 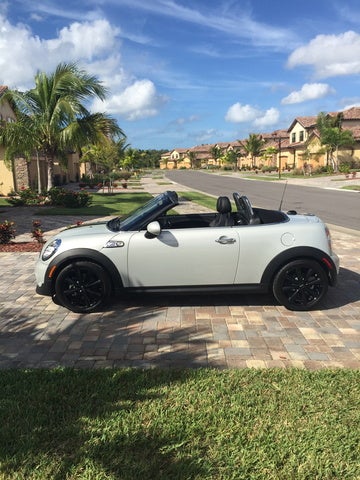 Want to impress your date/husband/wife with a 2-seat, 2-door Euro-styled drop-top? Take a look at MINI’s 2015 Cooper Roadster. But do it soon, because the Roadster, along with its Paceman and Coupe cousins, are slated to be phased out, victims of BMW-owned MINI’s recently announced plans to focus on quality rather than quantity. Therefore, those above-mentioned sacrifices are expected to bolster the reliability of what MINI/BMW claims are its “principles,” which presently encompasses the Cooper Hardtop, the Cooper Convertible and the jumbo-size (comparatively) MINI Countryman. Meanwhile, a whole new MINI sport convertible, slated to combine the positives in the Roadster and the Coupe, is in the works and is expected offer a direct challenge to, for example, Mazda’s MX-5 Miata convertible.

Anyhow, the 2015 Roadster will again be offered in 3 trims, the entry-level Base, the midlevel S and the flagship John Cooper Works, with the latter termed the JCW from here on. All trims only come in front-wheel drive (FWD), and all are scheduled to receive standard rain-sensing wipers and standard auto climate control as upgrades for the upcoming model year, while cargo/trunk space remains a paltry 8.5 cubic feet with the top up or down.

The basic powerplant, returning once again in the MINI Base, is a normally aspirated 1.6-liter inline 4-cylinder (I4) that mates with either the standard 6-speed manual transmission or the available 6-speed shiftable automatic gearbox to put out 121 hp and 114 lb-ft of torque. Neck-snapping acceleration is not this 4-banger’s forte but, at 28 mpg city/35 highway in stick-shift-stacked variants and 27/35 in automatic-toting trims, fuel efficiency is.

Need more speed? The MINI Roadster S packs a turbocharged version of the 1.6-liter I4, and bearing either the standard 6-speed stick-shift or the 6-speed shiftable automatic will pound out 189 hp and 177 lb-ft of torque. And mileage numbers aren’t all that bad at 26/35 using either transmission.

Taking this turbocharged 1.6-liter I4 a step further, the JCW sends 218 hp and 207 lb-ft of torque to the pavement, again using either the 6-speed manual or the 6-speed shiftable automatic. Mileage out of the JCW’s turbocharged I4, meanwhile, reflects that of its S sibling.

The traditional plethora of options choices, mostly in package form, also returns to bolster the 2015 Roadster lineup and include such available toys as keyless entry/ignition, rear parking sensors, heated seats, satellite radio and leather upholstery. The MINI Connected infotainment system also remains available to all variations and again boasts Smartphone apps and a 6.5-inch display that interfaces with audio functions, as well as with an optional GPS navigation suite. Although this techno-goody performs well enough, it still requires you to pull over in order to safely access a number of programs.

To finish, standard safety equipment found on board this 2-seat MINI includes 4-wheel antilock braking (ABS), stability control and traction control, again with the option of available Dynamic Traction Control. Roll bars and side-mounted airbags with head protection chambers of course return standard in all trims, as does a post-collision safety system. The Roadster S and JCW each offer standard front fog/driving lights, while adaptive xenon headlights and a remote antitheft alarm again remain optional for all 3 Roadster variants.

Have you driven a 2015 MINI Roadster?
Rank This Car