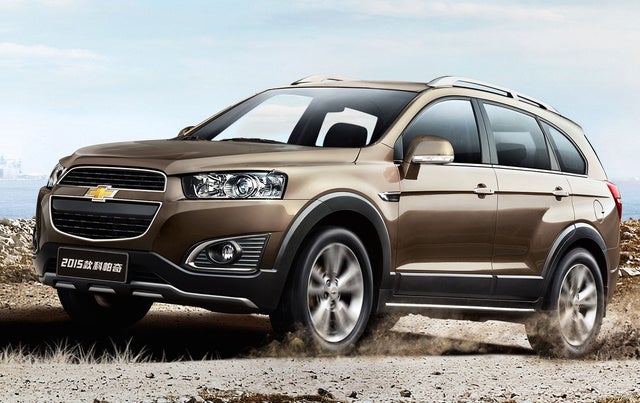 Looking for a Used Captiva Sport in your area?

For those who need a fleet-oriented compact crossover to transport just plain folks (or just plain cargo) and for whom a blacked-out Tahoe is just a tad over the top, Chevrolet offers its 2015 Captiva Sport. Alhough it’s designed for fleet use, i.e. bulk sales, this downsized people hauler offers a slew of standard creature comforts and appearance bling that’ll have not only the rental-car customer but the boss and even the hired help, i.e. everyone who gets to drive it, wondering if they’ve died and gone to crossover heaven.

In 2014, this 5-seat little-big ute boasted some 56.4 cubic feet of cargo space (with the rear seatbacks folded), as well as some added toting area via the standard fold-flat front passenger seat. Before you start counting any cargo-destined chickens, though, be advised that the internationally marketed Captiva Sport is among a bunch of GM vehicles, including its lookalike Opel Antara cousin, that are slated to roll on the new and smaller D2 platform, as opposed to the current (and almost midsize) Theta platform. Though there’s no official word yet on when this is happening, mid-2015 has been mentioned. In any case this shrinkage in frame foretells a truly compact Captiva Sport, most probably with some downsizing of cargo capacity as a result. With this scheduled size decrease, anticipation is rampant that the 2015 Captiva Sport, which looks a little like a pint-size Equinox and has its beginnings in a Saturn design that never made it off the drawing board, will get a refresh for the 2015 model year. So far, however, few details are available, though at least one reviewer expects a new engine to go along with the expected shrunken profile.

In any case, for the moment rental agencies, taxi and limo services, courier drivers and delivery drones can look forward to this mule returning in 4 trims, the base 1LS, the up-featured 2LS, the midlevel LT and the flagship LTZ. Also slated to return is the standard front-wheel drivetrain (FWD), with full-time all-wheel drive (AWD) once again scheduled as an option for all trims, definitely a plus in northern climes.

Although the whispers of a possible re-powering of the 2015 Captiva Sport lineup continue to swirl, potential owners can, for the moment, expect at least the adequate, if not neck-snapping 2.4-liter Flex Fuel inline 4-cylinder powerplant to return as the sole engine choice. Mated with the traditional 6-speed automatic transmission, this okay-but-not-great 4-banger should again put out 182 hp and 172 lb-ft of torque. Mileage numbers also should remain 20 mpg city/28 highway in standard FWD editions and a distinctly tepid 16/22 in AWD versions. Towing, meantime, is expected to be maxed out at 1,500 pounds with the optional tow hitch and wiring installed.

Until hints of a redesign are confirmed, look for this fleet-designated crossover to offer, in the base 1LS variant, 17-inch painted alloy wheels, a roof rack and skid plates outside, with cloth upholstery, the aforementioned fold-flat front passenger seat, full power accessories and carpeted floor mats adorning the interior. Surprisingly, this work wonk also comes with standard cruise control and telescoping tilt-wheel steering, along with such union-busting perks as air conditioning, OnStar Directions and Connections, and Bluetooth hands-free calling. A single-CD player boasting 6 speakers, satellite radio and a USB port should also remain aboard for this upcoming year.

Moving up to the 2LS gains you a standard power-adjustable driver’s seat, heated power exterior mirrors, dual-zone automatic climate control and an auto-dimming rear-view mirror, while the LT adds standard upgrades to the 17-inch wheels, as well as extra cargo management tools and improved accent materials outside and inside.

The 2LS and LT can be had with everything in and on the LTZ (except the 18-inch wheels) as optional equipment, while an available roof rack also remains optional. Additionally, it’s expected that GM’s MyLink audio and infotainment upgrade, with a 7-inch touchscreen display and GPS-based navigation, will once again be available to higher trims.

What's your take on the 2015 Chevrolet Captiva Sport?

depro The Captiva did make it off the drawing board as a Saturn - before that nameplate was discontinued.

Toadfrog56 Why is the Captiva not listed when you pull up a Chevrolet dealer?

2013Captivaowner Toadfrog56 and rbturk- Because it's a fleet vehicle - not sold at dealers to private individuals. You can only get them used in the US. The Captiva was a Saturn Vue until 2010.

Have you driven a 2015 Chevrolet Captiva Sport?
Rank This Car

Looking for a Used Captiva Sport in your area?

I own a 2015 chevy captiva and a 2000 toyota Sienna xle.wanting to sell one.which is better for long term ownership.any suggestions on this.please

Drove car for 5 minutes this morning and the little car with squiggly lines behind it comes on,dash reads "service StabiliTrak " no other lights on.....what's this means I can't get a straight ans...

Disconnecting The Odometer On 2015 Chevy Captive

We have added a tow package to our new Captive but on our first tow, even though we removed the fuse we were told take out, our car is still racking up miles...how can we stop this when we tow her b...

Why Were The Captiva's Discontinued?