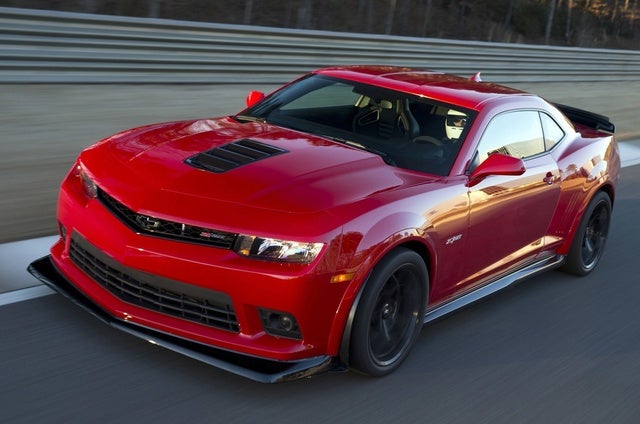 Average user score
4.5 ⁄ 5 stars
Based on 53 reviews
Review by GuruGZRZQ — I was thinking about getting back into driving a manual transmission and my son found this car for sale. I checked it out, and the price was very fair. The Camaro is in excellent shape and just needs ... Read more
Review by Michael — This was my dream car to get and I finally got one. The 2015 Camaro has everything that I wanted as far as features go and it was the color I was looking for. It drives great and I look forward to dri... Read more
Review by Leon — Pretty car I have a 2020 it,s black and sun roof rides good and smooth great on gas handles fantastic almost bought a mustang I used to have a 1971 I miss it Read more

As Chevy spools up for the release of the redesigned 2016 Camaro, it’s dealing with a brand-new Mustang that’s already debuted. How to keep the Camaro competitive in the meantime? An exterior paint-color shuffle, a no-longer-standard tonneau cover… and little else.

Thankfully the Camaro already has a lot to live for in the final year before the next-gen, still partially motivated by the monstrous mid-cycle refresh in 2014. As it stands, even the base-level Camaro provides the performance to promote passion in even the most persnickety. With 323 hp and 278 lb-ft of torque, the 3.6-liter V6 that comes standard in the LS and LT is as powerful as a lot of V8 options from not too far in the past. The V6 will get you 28 mpg on the highway with the 6-speed manual transmission and 17 when cruising around the city. Not as good as the V6 option in the Mustang, but more powerful. Of course, the Camaro is a bit more portly than the Mustang, but this isn’t a showdown.

As much as the V6 has the numbers to prove its performance chops, many still have trouble considering it a Camaro without 8 pistons pumping. For that flavor, the weakest V8 comes in the SS trim with a 6.2-liter, 426-hp version that delivers 420 lb-ft of torque as well. Actually, those numbers apply only with the 6-speed manual. If you opt for the optional 6-speed automatic here, you’ll be sacrificing 20 hp and 10 lb-ft of torque, so I’d strongly recommend the gentleman’s option and rowing your own. With the correct transmission in place, the SS will skip to 60 in 4.8 seconds and still get you 16 mpg city/24 highway.

The ZL1 trim gets you a supercharged version of the same engine, pumping out a forced 580 hp and 556 lb-ft of torque—enough to lop nearly a half-second off that sprint to 60. You can still get the optional 6-speed automatic here, but for the recently returned Z/28, no such choice exists.

And that’s how it should be. Cars like the Z/28 are meant to be driven, not ridden in. After all, why buy a “track-ready” car only to have the car do all the work? The cut Camaro has at its center a 7.0-liter dry-sump V8—a first for Camaro—culled from a Corvette and producing 500 hp and 470 lb-ft of torque. Coming in at nearly 300 pounds lighter than the ZL1, the Z/28 gets no air conditioning (unless you put it back in), significantly less sound-deadening material, forged 19-inch wheels with R-rated Pirellis, a lighter track-tuned fixed-ratio damper suspension from Multimac, carbon-ceramic brakes, a limited-slip differential and Recaro buckets with shoulder-harness cutouts. Of course, you don't actually get a shoulder harness, but the option for retrofitting is there. You’ll also get an aerodynamic package that provides an additional 440 pounds of downforce at 150 mph, but not much else other than the ability to scare yourself on road and track alike.

If you want the performance but not the sacrifice, the ZL1 is more your style. There you get the adaptive MagneRide suspension, Brembo brakes, foglights, 8-way power heated front seats, rear parking sensors and a rear-view camera, a 7-inch touchscreen with MyLink, heated mirrors, head-up display, leather and a 9-speaker Boston Acoustics stereo. You’ll also get 20-inch wheels, however, and those do nothing to improve the ride. Here, the MagneRide takes up most of the slack, though.

No such luck with the SS, which drops the upgraded brakes and adaptive suspension but still offers plenty of performance for those not wanting to downgrade to the V6. If you go with the 2SS package, you'll retain most of the luxury and comfort features as well. That said, the LS/LT variants with the V6 aren’t strippers. You’ll still get features like automatic headlights, keyless entry, a 6-speaker stereo with OnStar and satellite radio, air conditioning and power recline for the front seats, even when choosing the base LS. The LT adds foglights, power seats and the 7-inch touchscreen, and the 2LT package adds most of the features found in the ZL1. All except the LS and the Z/28 can be had as a convertible as well, but the tonneau cover is no longer standard on 1LT variants.

However, the big problem with every one of these different versions is glaring and unfortunate: visibility. It’s not the worst offender in the class—that honor just may go to the Challenger—but the Camaro does nothing to quell the stereotype of the pony car with poor sight lines. A difficult rear view is practically expected here, but thick A-pillars and a low-slung roof and seat make the forward scene no joy to take in either. It’s one thing when it’s a quirky aspect of a niche vehicle, but here it starts to impact the joy and even the practicality of driving. That’s not acceptable.

But if you can look beyond that—pun anticipated but not avoided—you’ve got a damned fine swan song for the Camaro’s fifth generation, one of the rare instances when waiting for the next gen may not be your smartest move. If you’re looking for collectibility, the Z/28 is a great option, even if it’s already sold out for 2015. GM says more are on the way, so fill out the order sheets before the sixth generation arrives!

What's your take on the 2015 Chevrolet Camaro?

motojohn56 After combing the classifieds for months looking for a "hobby" pony car that wasn't too dog-eared and tired, I decided that the 2002 Z28 was THE one to have. After all, lots of folks bought them thinking they were the last of a breed and didn't drive them very much. That was until I heard that the new 6 cylinder Camaro made about the same HP as the old z28 and decided to go drive one. From the moment I let out the clutch (manual trans of course) and heard that distinct V6 twin cam variable valve timing growl, I was impressed. The ticking check valve in the fuel system was a little odd, but not a deal breaker. Bought the base 1LS and LOVE IT. Guess what? It doesn't ride like a cement truck. What a concept. This car drives like the dream cars of only a few years ago. Added factory all-weather mats and a Magnaflow axle-back system which sounds amazing. All this from a Mustang man; starting with a 1970 Boss 302 (sold it, I know - whatever) then a '93 GT(225hp) and a 2002 GT (270hp). Don't miss the V8 at all. Since buying this 2015 LS Camaro I have lost all nostalgia for the early Pony/Muscle Cars (well, the early GTOs will always be cool). For the price of a Honda Civic EX you can have a car that is sure-footed, growling and a hoot to drive AND has a 5-Star crash rating. No I don't work for GM.

terryjosephs do you have one with t top how much

Users ranked 2015 Chevrolet Camaro against other cars which they drove/owned. Each ranking was based on 9 categories. Here is the summary of top rankings.

Have you driven a 2015 Chevrolet Camaro?
Rank This Car

My granddaughter has a 2015 Chevy Camaro 6cyl. Automatic. She has had the car in the dealership 3 times for an issue that the car will simple shut off while driving down the road. The dealership ...

From past 2-3 days I am trying to turn of my camaro car and in the first go the key doesnt turn completely to off mode and it doesnt come out I have to turn on the car.l, apply break and release...

Let me start with this, I am a female. I have always liked muscle cars so I bought myself a 2015 Camaro LS, used. One owner, not salvaged, through a dealership... they worked on the AC, changed a bu...

Why Is My Exhaust Loud?

Recently bought 2015 Camaro with a 6cyl. Exhaust seems really loud with a rumble. Is that normal? Where I bought it certified all was okay, is it possible the exhaust has been modified and how woul...