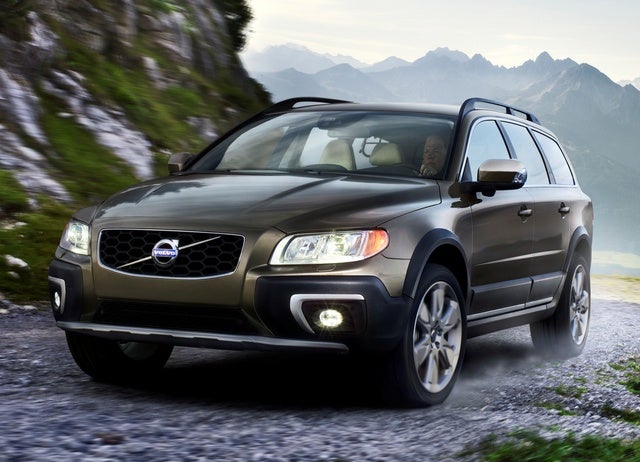 The 2014 Volvo XC70 brings to the table—to the garage, if you prefer—much of what its predecessors featured in prior versions. It offers a comfortable and classy ride to the mountains or the beach in a crossover SUV with relatively high clearance to help handle any matter of rough stuff, but also can fit the bill as a sleek machine ready for a refined night on the town.

Volvo, in a fashion, split the difference on mixing things up for this edition. The 2014 Volvo XC70 by no means gets a full makeover, but at the same time the changes to the vehicle probably classify as a little more than minor tweaking. The 2014 Volvo XC70 receives exterior enhancements, including a larger Volvo brand badge up front and larger skid plates, as well as technological and other advancements for the cabin.

The engine choices for the 2014 Volvo XC70 remain unchanged. The engine in the base XC70 is a 3.2-liter inline 6-cylinder good for 240 hp and 236 lb-ft of torque. Most experts recommend passing on that engine and opting for the added punch of the T6, which has a turbocharged 3.0-liter inline-6 at 300 hp and 325 lb-ft of torque. The fuel economy numbers for the two are almost identical, with the base checking in at 19 mpg city/25 highway with front wheel-drive (FWD) and 18/24 with all-wheel drive (AWD).

The 2014 Volvo XC70 has a 6-speed automatic transmission, and the T6 trim features revamped transmission programming designed to reduce shift times and knock. It also cuts the T6’s 0-to-60 time by nearly a half-second. Maximum towing capacity is 3,300 pounds.

Reviewers sometimes encourage prospective buyers of the 2014 Volvo XC70 to shop around, because they feel some of the vehicle’s rivals, including the Subaru Outback and BMW X3, offer many of the same amenities and at least equal performance.

They also acknowledge that there is plenty to find attractive about the XC70, from front seats that are as comfortable as any around to a smooth ride, and from lots of cargo space to Volvo’s vaunted reputation when it comes to putting out safe cars.

The exterior changes for 2014, which also include a wider grille and updated headlights to go with the skid plates, add to the rugged look of the XC70, the experts say.

On the inside, the 2014 Volvo XC70 has a new-look gauge cluster, a new multimedia system and a new navigation system with Sensus Connected Touch, including a 7-inch touchscreen display. The display can be set up in an Elegance mode that gives a more traditional look, an Eco mode or Performance mode, which features a tachometer and digital speedometer.

The base and T6 versions offer many of the same features, including dual-zone automatic climate control, foglamps, heated mirrors, integrated child booster seats, an 8-way power driver's seat and an 8-speaker sound system with a CD player. The rear seat splits 40/20/40, and laying it down can boost cargo capacity to 72 cubic feet.

More features are available through several packages. A Premier package offers a sunroof and leather upholstery, a Premier Plus has front and rear parking sensors and a power liftgate, a Technology group adds automatic high beams and various warning systems, and a Climate package offers heated front and rear seats.

The 2014 Volvo XC70, as expected given its family roots, is packed with safety equipment, including a full array of airbags, an electronic stability system and antilock brakes. The manufacturer’s City Safety technology is standard and has a low-speed collision prevention feature that automatically brakes when a collision is imminent and works at up to 31 mph. Various other detection systems are available.