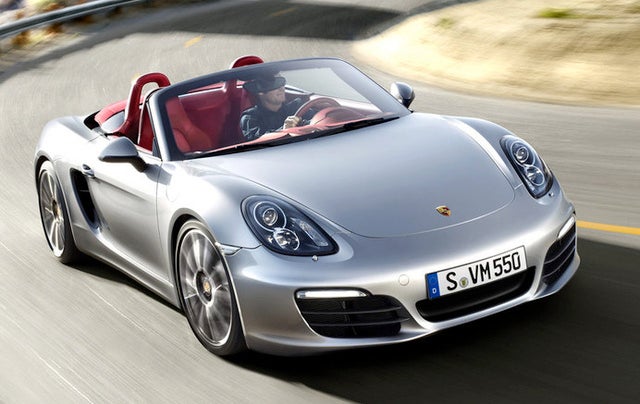 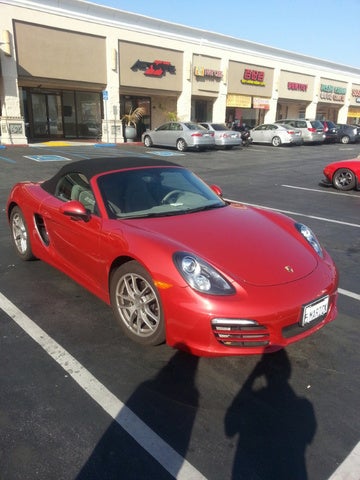 Following a full third-generation makeover in 2013, the Porsche Boxster compact sport convertible receives only a few minor updates for 2014, including new Rhodium Silver Metallic and Sapphire Blue Metallic exterior colors, as well as a new optional 12-speaker Burmester audio system. Somewhat revolutionary when it made its first appearance in the 1990s, the Porsche Boxster retains its midengine platform and continues to deliver impressive performance and handling, which have made it a favorite with reviewers and owners since its inception. Add in the updated exterior design unveiled in 2013 and a sporty driver-oriented cabin, and it's easy to see why the Boxster remains at or near the top of its class.

Prior to its redesign, the 2-passenger Boxster was considered one of the top compact roadsters in the world, and the recent improvements have only enhanced its image. The Boxster grew slightly larger during its redesign, and some critics say those extra few inches have had a negative impact on handling. But most disagree, calling the Boxster one of the best cars in its class, with superior performance and handling, as well as distinctive styling that makes it stand out on the road. Competitors to the Boxster include 2-seat roadsters like the BMW Z4, the Mercedes-Benz SLK-Class and the Audi TT, as well as larger sports cars like the Chevy Corvette.

Porsche once again offers the Boxster in Base and S trims, each powered by a different engine. The Base comes equipped with a 2.7-liter 6-cylinder engine with direct injection and the automaker's VarioCam Plus engine management system, which helps improve efficiency. The engine puts out 265 hp and peak torque of 206 lb-ft, delivered to the rear wheels through a 6-speed manual transmission or an optional 7-speed PDK (Porsche Doppelkupplung) automatic transmission with a manual-shift mode. The base engine drives the Boxster from 0-60 in 5.5 seconds with the manual shifter and 5.4 seconds with the automatic. Fuel economy numbers check in at 20/30 mpg with the manual transmission and 22/32 with the automatic.

The Boxster S upgrades to a 3.4-liter 6-cylinder developing 315 hp and 266 lb-ft of torque. It links to the same transmissions and pushes the Boxster from 0-60 in 4.8 seconds with the manual transmission and 4.7 seconds with the automatic. The EPA estimates fuel economy numbers of 20/28 with the manual and 21/30 with the automatic. An optional Sport Chrono Package, available for both trims with the PDK transmission, adds a Sport Plus mode, activated by a button on the center console. The Sport mode adjusts throttle response and engine dynamics and drops 0-60 times to 5.2 seconds for the Base Boxster and 4.5 seconds for the S.

During the 2013 generational update, Porsche stretched and widened the Boxster's platform, lowered its stance and flattened its windshield, improving both aerodynamics and handling, as well as exterior aesthetics. While it's slightly longer overall, the redesigned Boxster has a shorter front overhang than the previous version. The front-end design does away with a traditional grille and makes do with low nose and horizontal intake openings below halogen headlights on the Base trim and HID headlights on the S.

The electric convertible top, also redesigned in 2013 and longer than the previous generation's, uses a special material designed to reduce interior noise. The top raises and lowers in less than 9 seconds, and owners can raise and lower the top at speeds up to 31 mph (50 kph). At the sides, a scalloped design channels air to large vertical intakes, while in the rear, an automatically extending wing, which owners can also manually deploy, helps keep the vehicle stable at higher speeds. New LED taillights and a rear diffuser complete the exterior look, along with a single oval tailpipe on the Base trim and dual pipes on the S.

The Boxster's body makes extensive use of aluminum sheet metal to keep the pounds off. The current version weighs in at just 2,888 pounds (2,954 with the PDK automatic transmission), making it the lightest vehicle in its class, according to Porsche. This helps to ensure better performance and agility and helps reduce fuel consumption. The Boxster's midengine design places the powerplant directly behind the 2-passenger cabin but in front of the rear axle, resulting in good overall balance and superior handling. The standard Porsche Torque Vectoring (PTV) system automatically applies the brake to the inside rear wheel under hard cornering and aggressive maneuvers to ensure traction and stability.

The Boxster borrows its new electro-mechanical power steering system, which debuted in 2013, from the 911 Carrera, giving it performance-oriented credentials. Testers say it doesn't provide quite the fingertip control of the previous hydraulic system, but it helps to conserve fuel. The Boxster S also uses the same front-axle brake discs as the Carrera. The Base rides on 18-inch wheels, while the S gets 19-inch wheels. Owners can add a variety of optional wheels, including 20-inch Carrera S and Carrera Classic wheels.

Inside, the Boxster's sporty, comfortable cabin has a driver-oriented design influenced by the Carrera 911. New sport seats added in 2013 feature power-adjustable seatbacks and position the driver and passenger lower than in the previous version, with good legroom. They include Alcantara center inserts for a sporty feel. Optional 14-way power-adjustable leather Sports Seats Plus have higher cushions and additional bolstering. Owners can also add leather Adaptive Sports Seats Plus with 18-way power adjustment and memory. Heated and ventilated seats are also available. Porsche offers a number of additional seat options, as well as a variety of steering wheel options. A leather-wrapped 3-spoke steering wheel emblazoned with the Porsche crest comes standard, but some testers aren't completely happy with its design. A multifunction Sport steering wheel and SportDesign steering wheel with paddle shifters, as well as a heated steering wheel, are also available.

Overall, the cabin gets high marks for its sporty design and high-quality materials. The 3-dial sport-oriented instrument cluster features black dial faces in the Base and aluminum-colored faces in the S. A new 4.6-inch color screen to the right of the cluster displays vehicle and mechanical information, while a larger 7-inch touchscreen at the top of the center console serves as the interface for the 4-speaker audio system and optional navigation system. Owners can add a 10-speaker Bose audio system with features like HD radio and a 6-CD changer, as well as the new top-of-the-line Burmester system. Cruise control, Bluetooth, air conditioning, SiriusXM satellite radio and a USB port are among the other standard features, while additional options include dual-zone automatic climate control and a parking assistant.

Safety equipment includes Porsche's Stability Management system, which integrates with the antilock brakes. Front and side airbags also come standard. The IIHS and NHTSA have not safety-rated the Boxster.

What's your take on the 2014 Porsche Boxster?

GuruYGKHV Beautiful and fast car, but a 2014 Boxster would be far beyond my budget (unless I could do the kind of wild deficit spending that Trump is doing)!

Have you driven a 2014 Porsche Boxster?
Rank This Car

Can I ask if there is any other differences in the 2014 boxter model and the s model?

Does anyone on this site buy cars from a private sale? Let me know as I have a 2014 Porsche Boxster for sale.

How do I figure out the lease payments

Thinking Of Making An Offer On A New 14 Boxster. The Car Has Been On The Lo...