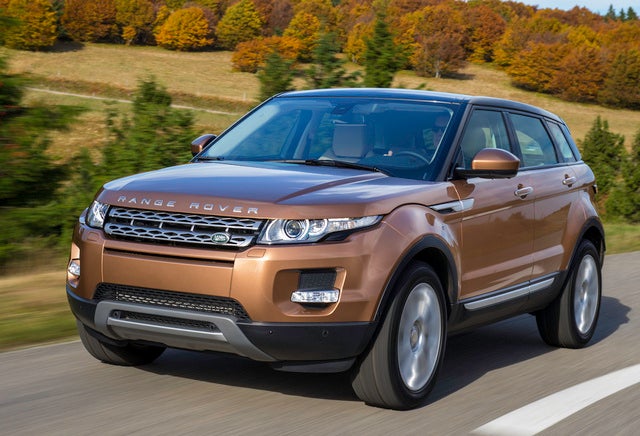 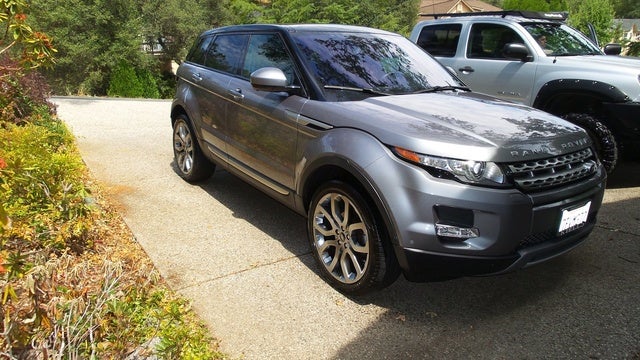 Not satisfied to simply look very different, the 2014 edition of Land Rover's best-selling Evoque endeavors to innovate crossovers altogether in another quick-step refresh atop a very successful 2012 debut and 2013 major refresh. Despite its own rearward visibility issues, this Evoque provides the clearest view into Jaguar Range Rover's grand plans for the lineup between now and 2020.

Bringing the very same jaw-dropping agility as the all-new 2014 Range Rover Sport together with luxurious convenience technologies, this Evoque also offers several unique charms no other Rover can match, not to mention features unmatched by any single compact crossover. Offered in both 2-door and 4-door hatchbacks with an unmistakeable style, the Evoque simply is not your usual crossover or Range Rover, which would be why the maker dropped "Range Rover" from the Evoque's name last year.

In other words, the Evoque doesn't get a trail rating, but it can certainly handle the unpaved kind of beaten path. Already a noted graduate of road-etiquette school, these 2014 modifications bring in the latest Range Rover Sport's highly admirable ability to handle hairpin turns at high speeds, but without its rock-climbing know-how and relatively wobbly road legs that would come with it. Set to flagship the maker's new luxury-oriented third of a totally rebuilt lineup over the next 6 years, you can safely expect much the same of the Evoque as Rover's chest-pocket plans unfold.

Still featuring the same 2-liter turbo 4-cylinder engine that is surely just the first of more to come, the 2014 updates pair those 240 ponies and 250 lb-ft of torque with a very rare 9-speed shiftable automatic instead of the previous 6-speed for a smoother, quieter ride highlighted by improved overall refinement and fuel economy better than the former already-impressive 20 mpg city/28 highway figures on regular fuel. As with every Land Rover, the Evoque, too, is technically in permanent 4-wheel drive (4WD), but for 2014 decouples into a more front-wheel setup at steady speeds above 22 mph, locking back into 4WD within 300 milliseconds when the system detects a change in conditions.

This Evoque also loads on the comfort tech, featuring Adaptive Cruise Control complete with Queue Assist (think "toll-traffic cha-cha" without all the footwork), Forward Alert and Intelligent Emergency Braking. That raked-in roofline makes for terrible outward visibility, prompting new rear cross-traffic systems and incoming vehicle sensors in addition to an already very long list of cameras, bells and safety whistles sure to keep any gadget geek giddy and grinning with the mere thought of driving somewhere.

Speaking of the roofline, cargo capacity is cramped down to some 48 cubic feet for the 2-door coupe, or 51 in the 4-door, but this also helps the Evoque slice through the air for a 7.4-second arrival at 60 mph despite having the smallest engine of the entire Rover lineup (for now). There might yet be a smaller and lighter Rover in the years to come, but the Evoque will likely always be Land Rover's most comfortable small sport. That said, you'll have to get all of its available doors if you're eying the top-shelf Prestige, otherwise available for both body styles in base Pure Plus, Pure Premium and Dynamic "design themes," obviously becoming more wood-and-leather laden as you move up the ladder.

What's your take on the 2014 Land Rover Range Rover Evoque?

Kimberly I love this car. She's my princess.

Users ranked 2014 Land Rover Range Rover Evoque against other cars which they drove/owned. Each ranking was based on 9 categories. Here is the summary of top rankings.

Have you driven a 2014 Land Rover Range Rover Evoque?
Rank This Car

Could Bad Sensor Be Problem With Land Rover Turbo?

We have a 14 Evoque Dynamic and the turbo works great, then it doesn't work at all, then it starts working, then it stops. When it is working it's great - but it only works for about a week, then do...

120 views with 1 answer (last answer about a year ago)

Sometimes I can hear a fan running loudly while I am driving. Then when I shut the car off....that fan still runs for a few minutes. My coolent low indicator is on. However I had the levels che...