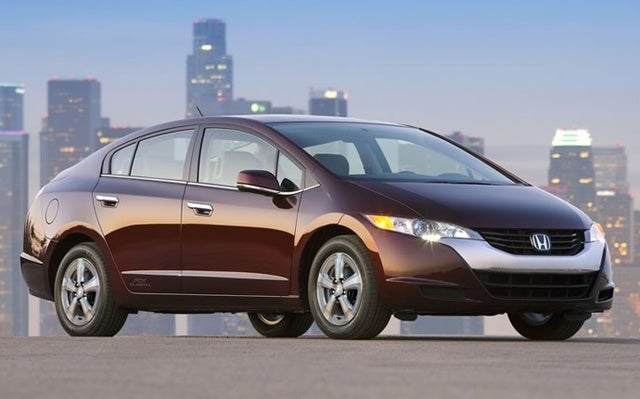 Looking for a Used FCX Clarity in your area?

Due for one exciting redesign next year, the 2014 Honda FXC Clarity continues unchanged since its 2009 debut. Not that anyone outside of southern California really knows what the Clarity has been these last 5 years—the name of this 4-door, 4-passenger, front-wheel-drive hatchback is anything but fitting until you gain some insight, think accordingly, and then step it up a notch.

Which is to say, the Clarity is a lot like Honda's Insight hybrid; they share an electric motor, battery pack and regenerative brake technologies for a relatively similar driving experience. For instance, highway speeds are still achieved in a relatively slow 12.5 seconds with the 134-hp and 189-lb-ft torque engine, and the trunk is a touch on the small side with about 13.1 cubic feet to spare including the extra underfloor storage. However, the Clarity is also a lot like Honda's gas-powered Accord sedan in terms of feature content, overall feel, driving range, and fill-up time, despite being entirely mechanically unique to Honda's lineup.

The key difference is what goes in and what comes out. Namely, hydrogen and water, respectively. Mixing hydrogen with oxygen to charge its 288-volt lithium-ion battery pack and power its 100kW electric motor, the FXC Clarity is what's known as a fuel-cell car. This, of course, comes with its own set of quirks beyond your usual hybrid, especially as it's such a new technology, but Honda is reportedly hard at work to eliminate many of those oddities in the next generation due to debut for 2015.

Reported to offer full seating for 5 with a new fuel-cell stack housed entirely under the hood with some 60% more power and efficiency improved by a third over its current 60 miles per kilogram, the next Clarity requires a mere 3 minutes to fill its default tank capable of a range of well over 300 miles. I say default because the current arrangements for a double-capacity tank may carry over, leaving the whirr of its compressor at start-up and general loudness as Honda's only remaining refinement interests.

That said, in spite of being 3 times more efficient per kilogram of hydrogen relative to a gallon of gas in your average car, the Clarity's overall reach is still a big question due to that change in fuel. Although California is rapidly expanding its hydrogen fuel stations with Oklahoma coming in a tight second, the combined efforts of Honda and GM to expand these facilities may not be enough to merit a nationwide debut anytime soon. At least you can rest assured by the time a hydrogen fuel station does pop up near you, there's a refined option to make use of it.

What's your take on the 2014 Honda FCX Clarity?

Have you driven a 2014 Honda FCX Clarity?
Rank This Car

Looking for a Used FCX Clarity in your area?