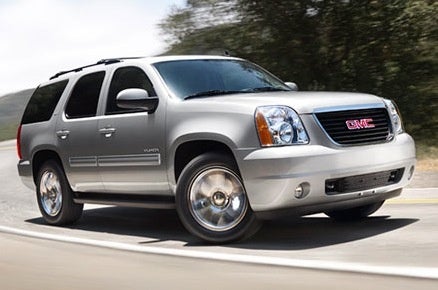 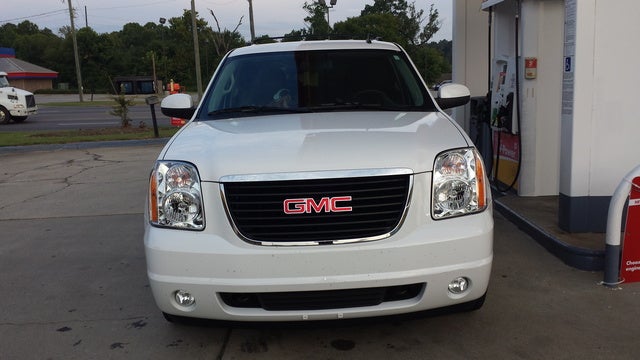 Like the Tahoe and Suburban, its SUV brethren from General Motors, the 2014 GMC Yukon will appear in its current guise one more time before a much-anticipated redesign for 2015. The Yukon gets a few minor changes for this brief model year, but it remains essentially the same—a full-size utility vehicle with serious towing capabilities, a smooth ride, loads of standard features and plenty of room for passengers or cargo.

GMC simplified the Yukon lineup by eliminating the Hybrid model. The company also made shopping simpler by eliminating the Convenience Package, since those features now come standard on the base SLE model—remote start, power-adjustable pedals, a reversing camera, rear park assist and an auto-dimming rear-view mirror with camera display.

Both of the Yukon trims, the SLE and SLT, are powered by a 5.3-liter Vortec V8 engine that's mated to a 6-speed automatic transmission and produces 320 horsepower and 325 lb-ft of torque. The V8 has Active Fuel Management, which shuts down 4 of those 8 cylinders during light-load conditions, which helps the Yukon get 15 mpg city/21 highway.

Those mileage numbers stay the same whether you choose the standard rear-wheel drive (RWD) or the optional 4-wheel drive (4WD), but the trailering capacity does take a dramatic turn dependent on that choice. The RWD Yukon can tow up to 8,500 pounds (and has a maximum payload of 1,633 pounds), while the 4WD models can tow up to 5,200 pounds (with a maximum payload of 1,606 pounds). The Yukon's people-carrying capabilities don't have that wide a range, but it can seat between 7 and 9 passengers. The SLE has the option for a front-row bench, and both trims have the choice of a second-row bench with a 60/40 split or two second-row bucket seats. The only third-row choice is a 50/50-split bench.

The third-row bench doesn't fold down flat, but it can be removed, although that will take two people and some effort to accomplish. There's 16.9 cubic feet of cargo space behind the third row, 60.3 cubic feet if it's removed and a total cargo volume of 108.9 cubic feet.

Everyone and everything inside the Yukon will enjoy a comfortable ride thanks in large part to a stiff, fully boxed frame, coil-over-shock front suspension and multi-link rear suspension. The SLT trim model also has an available Autoride suspension system that reduces body motion and smooths the ride with a real-time damping system that automatically adjusts based on input from body and wheel motion sensors.

GuruT37Q8 It's a great SUV but preferred the Tahoe Chevy.

Have you driven a 2014 GMC Yukon?
Rank This Car

How can I get the running boards to work. Already checked the fuse and it was fine. What's the next step? Both quit at the same time so I wouldn't think it's a motor.

Has anyone here replaced the 1st row seating which in all the newer vehicles is captains chairs with a center console. I need my 2014 yukon which seats 8 to seat 9, so a front row bench would solve ...

How Can I Inform Consumers Of A Particular Vehicle Listed That I Know Has M...

I purchased a vehicle from a dealership in Duluth Georgia and found substantial rust under the car due to being in Canada. They took the car back and admitted they knew about the rust but did not th...