Average user score
4.5 ⁄ 5 stars
Based on 6 reviews
Review by CokeNoJoke — I absolutely love the 2014 BMW X6. I can not wait until I own one. Read more
Review by Guru8GV97 — Great car. Would like a little more upgraded features. I will look for a more newer model Read more 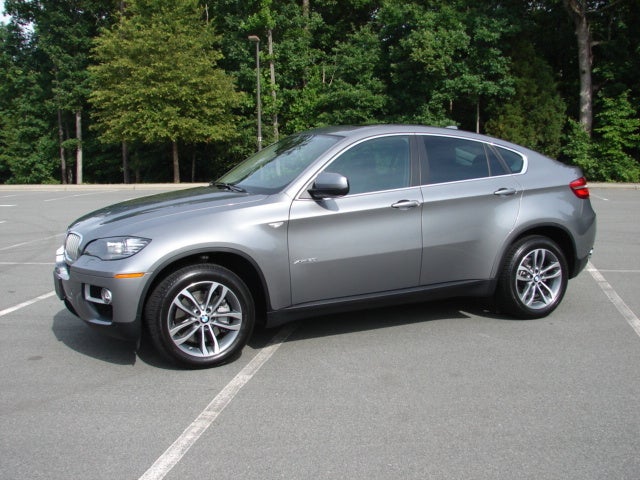 It’s no shock to me that the X6 has become a resounding success in the United States. After all, we have nearly the lowest level of acceptance of evolution among western countries; logic isn’t our strong suit. That makes the X6 the perfect transportation for the U.S. It’s flashy, it’s fast, it’s big, and it’s nearly nonsensical.

What else can be said about a vehicle that combines the disadvantages of an SUV with the impracticality of a sports car? Here you’ll get poor visibility and trouble parking combined with low mileage and a stiff suspension, all in one package! Handles almost as well as a coupe, and hauls almost as well as a truck—the X6 is the ultimate compromise in the guise of the Ultimate Driving Machine.

Based on the similarly confusing X5, the X6 takes its cues from the venerable 6 Series line, which provides the extra dose of aggressive performance needed here. Ignoring the lack of logic that puts a stiff suspension, 20-inch wheels and a turbocharged V8 into an offroad vehicle, the X6 has been a big success for the Bavarian Motor Werks. With sales figures climbing steadily since its introduction, and with competitors attempting their own version of the “Coupe Utility Vehicle,” it’s apparent that logic doesn’t regularly enter into the car-buying thought process.

Still, the attraction isn’t hard to understand. The “Base” xDrive35i trim offers you AWD, a 3.0-liter, turbocharged inline 6-cylinder, an 8-speed automatic transmission and more standard features than your typical options list. That means 20-inch alloys, a power tailgate and moonroof, navigation with DVD, chrome exhaust and adaptive xenon headlights.

Go for the xDrive50i and you’ll get a 4.4-liter twin-turbo V8 in place of the 3.0-liter 6. The lesser of the two will deliver 300 hp and 300 lb-ft of torque. That’s usually more than enough, but with the vehicle's curb weight approaching 5000 pounds, moving up to the 400 hp and lb-ft of torque in the xDrive50i can be understood. Of course, the X6 M’s 555 hp being pulled from the same 4.4-liter engine is the ultimate insult here and might just be the only power option that makes sense in this confused chimera. The 8-speed isn’t strong enough to handle such power here, so the M utilizes a more robust 6-speed automatic to handle the extra oomph.

The numbers aren’t enough to tell the story here, however. While the X6 offers impressive stats like 60 cubic feet of storage with the rear seats folded, it fails to mention the tight quarters those rear seats offer—in both head- and legroom. The comfortable, leather-wrapped, power front seats would never betray such a dearth of room in the rear, but try to fit some actual adults back there and you’ll find the X6 lacking. Even attempting to look rearward is frustrating, as rear visibility in the X6 falls far short of the hindsight you’d acquire upon purchase. Even that impressive 60-cubic-feet figure falls short of expectation in practical application, as the sloping roof and rear opening severely limit your storage options.

But none of this seems to matter. Sales figures for the X6 are still increasing, and BMW has plans for more Xs in its lineup. Weight and price and rationality be damned! Next year we get a glimpse at a new X6, so if this is your particular poison, it’s best to jump now. Soon, we’ll have another round of ridiculous to ponder.

Users ranked 2014 BMW X6 against other cars which they drove/owned. Each ranking was based on 9 categories. Here is the summary of top rankings.

108 views with 2 answers (last answer about a year ago)