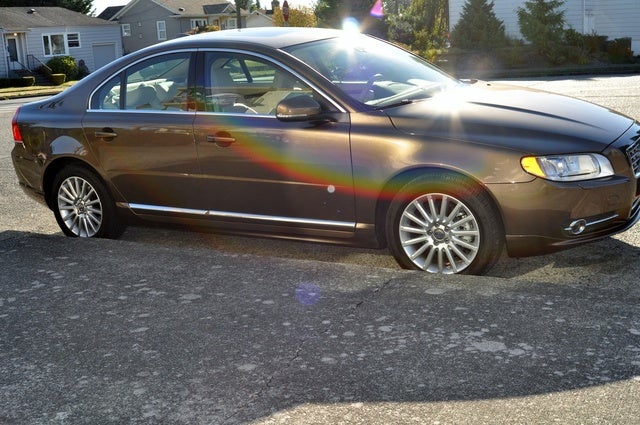 Refreshed from a light shower of change in 2012, Volvo's flagship S80 full-size sedan carries into 2013 with headlight washers, rain-sensing wipers and a push-button start newly standard, plus the new availability of adaptive xenon high-density headlights in the lowest trim level. Where other makers use their flagship to foreshadow what's to come in the current generation, this Swede ride adopts some standards at the same time as most other Volvos while adding in a few spices other models may not see until their next generation. Volvo is a maker known to take very few chances, and the S80 is a highly concentrated example of this philosophy.

Above all else, the S80 exemplifies peace of mind by affording luxury touring comfort for 5, near-unbeatable safety and advanced technology all packed up in a tidy, understated shell made to blend in and avoid unwanted attention—or even an ounce of envy. After all, Volvo's statement of Scandinavian luxury is all about being accessible, elegant and intelligent without the elitist high brow, snubbed nose and stuffed shirt. As such, the interior is minimalist but made with premium-class materials, and the technology included is meant for practicality over selfish show-off appeal, while the driving dynamics are ample for public roads but keep reliability solidly in mind over thrill.

Take for instance the standard inclusion of Volvo's City Safety accident avoidance system, which uses the brakes and every sensor and beeper at its disposal to keep the driver awake, mitigate accidents and with luck avoid collisions altogether. As of 2012, the powered and heated side mirrors Volvo has employed since the '90s gained turn signals to warn folks directly on your flank of your intent to turn, and the 2013 addition of high-density-discharge adaptive xenon headlights to the lowest trim upgrade ensures you can plainly see where you're going (and nobody won't see you coming) for a small fee.

Although even front-wheel-drive (FWD) Volvos have required all-wheel alignment since the '90s due to their special suspension, actual all-wheel-drive (AWD) Volvos are a rarity, and the S80 T6 is one such rare bird. You can also fetch FWD with the S80 3.2, though it means foregoing a notoriously smooth turbocharged Volvo engine. The only things you can get with the T6 that you can't with the 3.2 are that AWD drivetrain and the Dynamic option pack, which includes 18-inch alloys, a sport-tuned chassis, interior aluminum inlays and those xenon lights that are available to the 3.2 otherwise.

The two engines share a 6-speed automatic transmission, but the 240-hp and 236-lb-ft of torque 3.2-liter inline 6-cylinder powering the 3.2 gets the best efficiency at 20 mpg city/29 highway. The T6 is powered by a turbocharged 3-liter inline-6 good for 300 hp and 325 lb-ft of torque, though, so if you have a need for Gs and don't mind 18/26 mpg, then the T6 is where to look. Otherwise, both can be upgraded to Premium Plus or Platinum "trim levels" thanks to Volvo's new simplified system of making all upgrades essentially just option packages.