Out on the road, the new RAV4 doesn’t feel particularly quick, but the little 4-banger does provide plenty of oomph for confident acceleration and stress-free merging and passing. 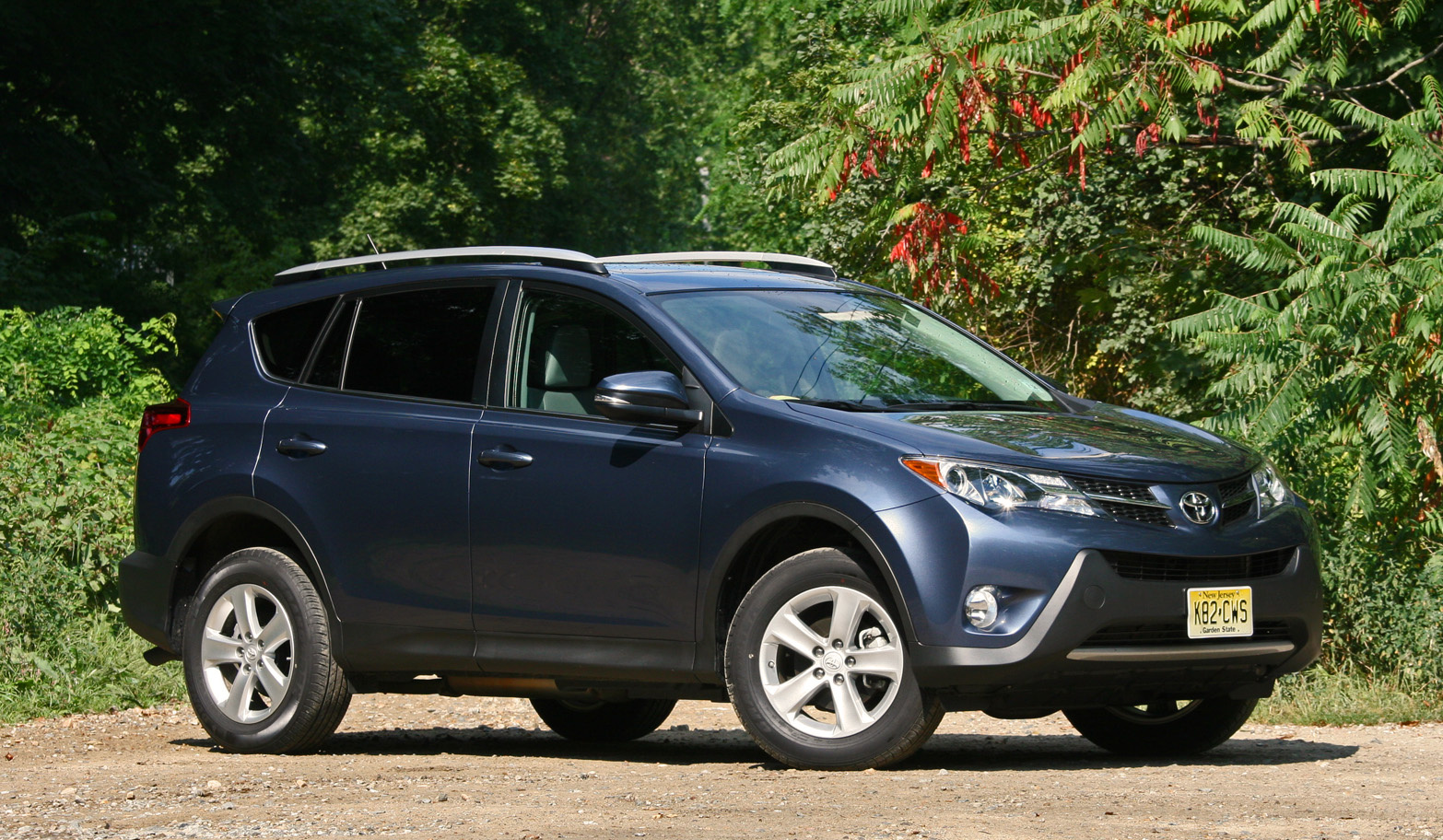 Toyota, considered one of the founding fathers of the small crossover segment, has attracted buyers with multiple generations of RAV4s built to be economical, family-friendly and versatile. The all-new 2013 model keeps that streak alive, but loses V6 engine and third-row-seat options in the process and continues to be hampered by an interior overrun with hard plastics. With the exception of value, many of the RAV4’s competitors offer shoppers a better overall package. 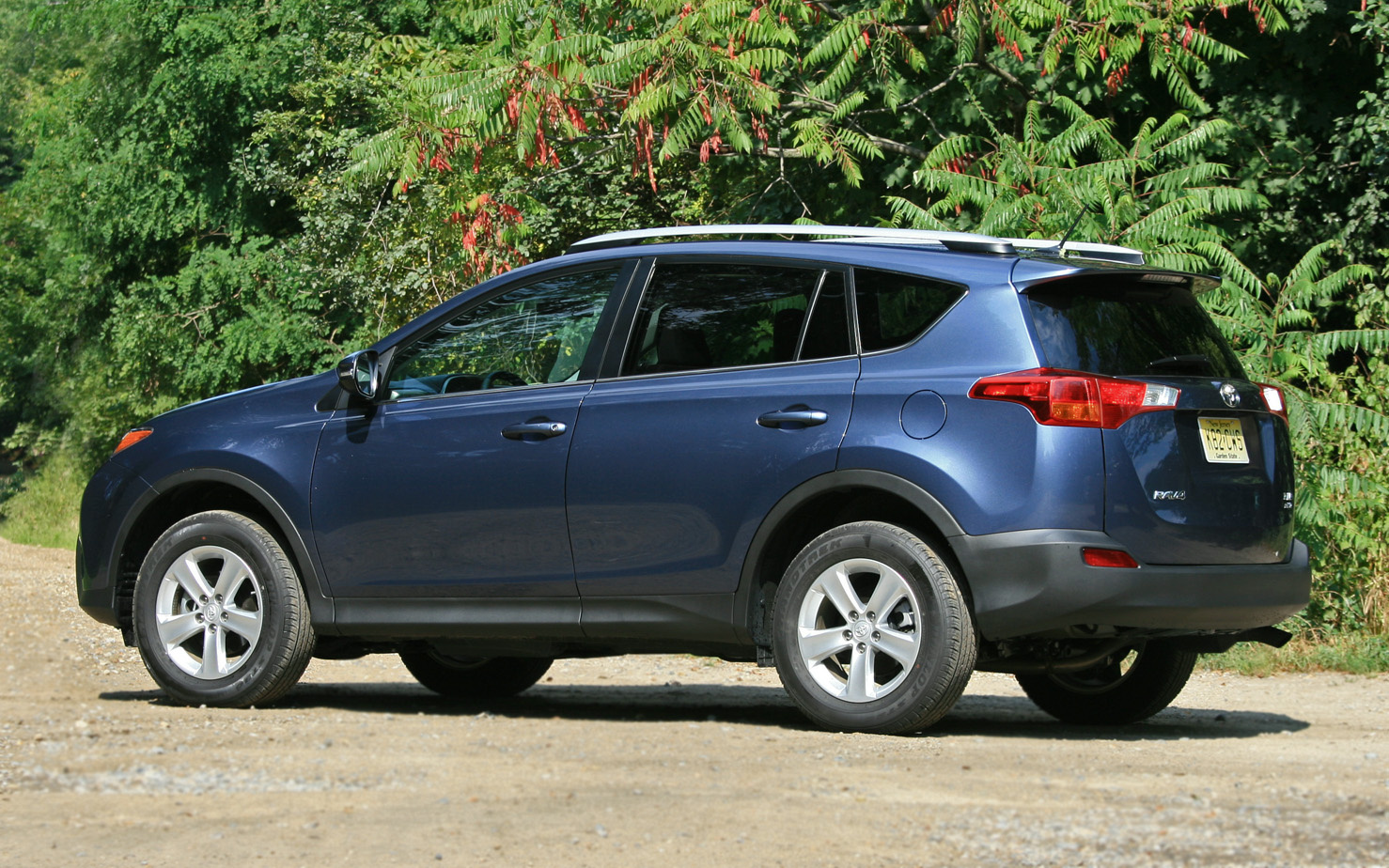 Completely redesigned for the 2013 model year, the Toyota RAV4 crossover ditches its rather dowdy duds to make way for a much more contemporary appearance accented by a sharply defined rising beltline, trendy swept-back headlights, a sloping rear roof and shelf-like horizontal taillights. Like other Toyota redesigns of late, the RAV4 has been transformed into a genuinely stylish ride. It’s also more user-friendly, thanks to the introduction of a more traditional top-hinged tailgate in lieu of the side-hinged door that often added a level of inconvenience to what should’ve been simple loading and unloading. Unfortunately, the new model is limited to 5-passenger seating capacity, meaning the somewhat torturous but nevertheless occasionally handy third-row option has been removed from the menu, and despite claims to the contrary, the 2013 RAV4’s interior remains a bastion of hard plastics.

Those tactilely disappointing yet seemingly durable materials are standard fare in the base RAV4 LE model, priced from $24,160 (including an $860 destination charge) in front-wheel-drive (FWD) form. All-wheel-drive (AWD) capability is optional on every RAV4. As one might expect of an entry-level variant, the LE sports 17-inch steel wheels, but folks may be surprised to find a tilt and telescoping steering wheel with integrated audio and Bluetooth controls, a 6.1-inch touchscreen with a rear-view camera display, an audio system with a USB port and iPod compatibility, a height-adjustable driver’s seat and a rear spoiler.

For car shoppers who want to dig a little deeper into the amenities bag and are willing to spend at least $25,150, the 2013 RAV4 XLE is worth consideration. This is where you’ll find 17-inch alloy wheels, heated mirrors with built-in turn signals, a power moonroof, dual-zone climate control, a cargo cover, foglights, extra chrome accents and roof rails that provide a more finished look. An upgraded audio system with navigation is optional.

If the XLE doesn’t quite float your boat, the $27,870 RAV4 Limited might do the trick. Toyota has fitted this top-of-the-line model with 18-inch alloys, a height-adjustable power tailgate, leather interior accents, heated front seats, premium upholstery, a push-button ignition system and an auto-dimming rear-view mirror. The navigation system is available, as are an 11-speaker JBL audio system and a blind-spot monitor.

Those extra features certainly have their appeal, but the volume-selling model is the XLE, so that’s what I spent a week test-driving. With AWD, a set of floor mats, the optional audio and navigation package, and the destination charge factored in, the total price came to $27,709. 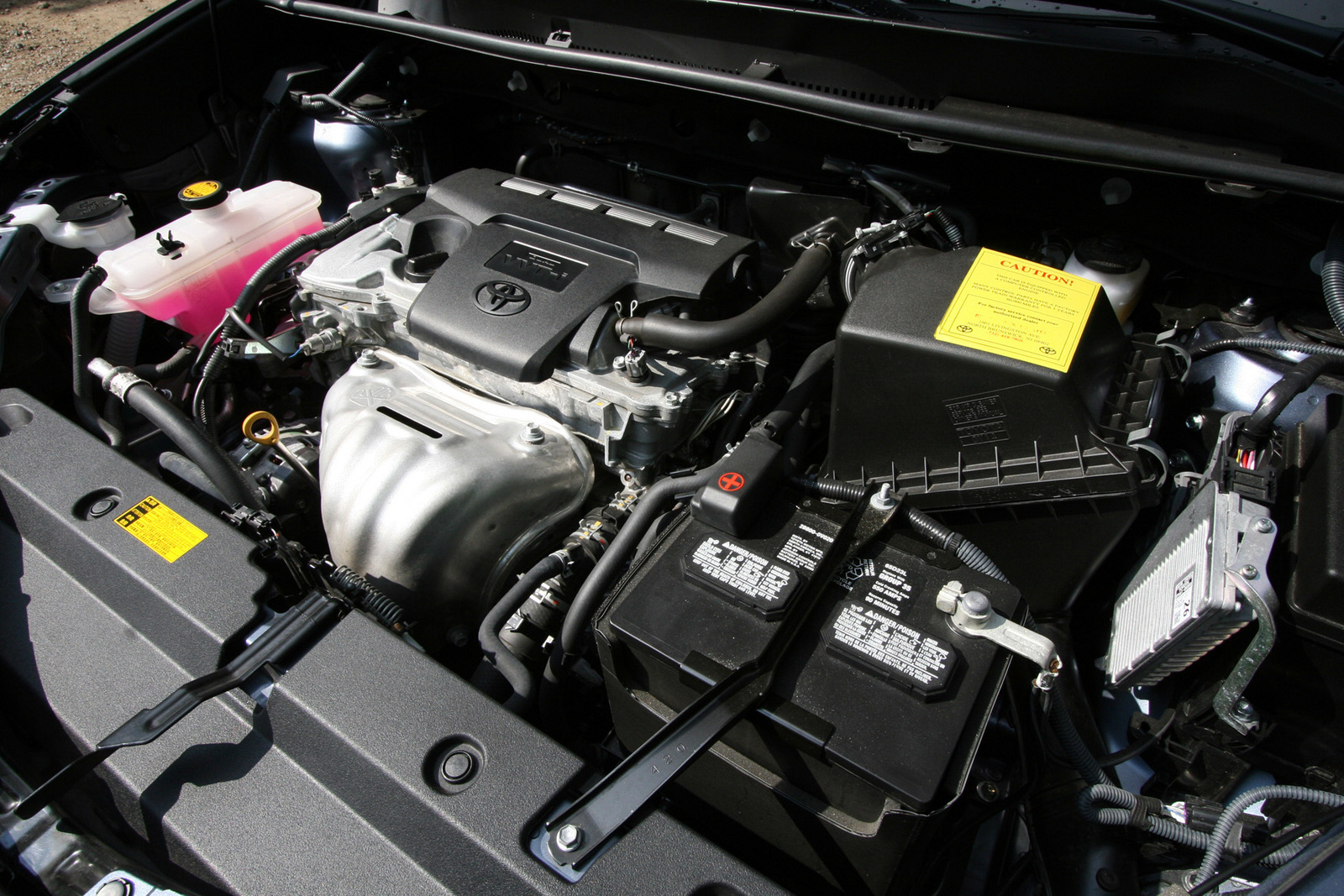 In a noteworthy departure from its predecessor, the 2013 RAV4 is available with only one powerplant, a 2.5-liter 4-cylinder that puts out 176 hp and 172 lb-ft of torque. The previous model’s lively V6 option is off the table this time around, leaving the Toyota without an answer to the Ford Escape’s optional 240-hp 2.0-liter EcoBoost or the Subaru Forester XT’s 250-hp mill. That said, the RAV4 is on par with the CR-V and its single 185-hp engine.

Out on the road, the new RAV4 doesn’t feel particularly quick, but the little 4-banger does provide plenty of oomph for confident acceleration and stress-free merging and passing. Helping in that effort is a standard 6-speed automatic transmission featuring Normal, Eco and Sport modes. Eco executes quicker upshifts to keep revs down and fuel efficiency up, while Sport aims to keep the engine running in its peak power band longer by delaying upshifts and initiating downshifts sooner. In my experience, Eco made the RAV4 feel sluggish, and Sport was a little too eager for routine daily commuting, so I stuck with Normal mode most of the time and averaged 27.4 mpg. EPA estimates for AWD models like mine are 22 mpg in the city, 29 mpg on the highway and 25 mpg combined. In terms of handling, the RAV4 soaked up the bumps well and didn’t become unsettled over rough pavement, though I thought suspension noise was a little more pronounced than it needed to be.

My opinion differed from that of my stepsister, who happens to own an AWD 2010 RAV4 with the 4-cylinder engine. As a home-health nurse in a fairly rural area, she puts in a lot of time behind the wheel every day, making her a good candidate to provide a real-world comparison of new versus old. Over the course of several miles, Jenn had a chance to get a feel for the 2013 RAV4 and applauded what she described as smoother acceleration, a “much more solid” feel on the road and over bumps, and the general sense that she was in a safer vehicle. Most of all, she was impressed by how much quieter she perceived the redesigned RAV4 to be. 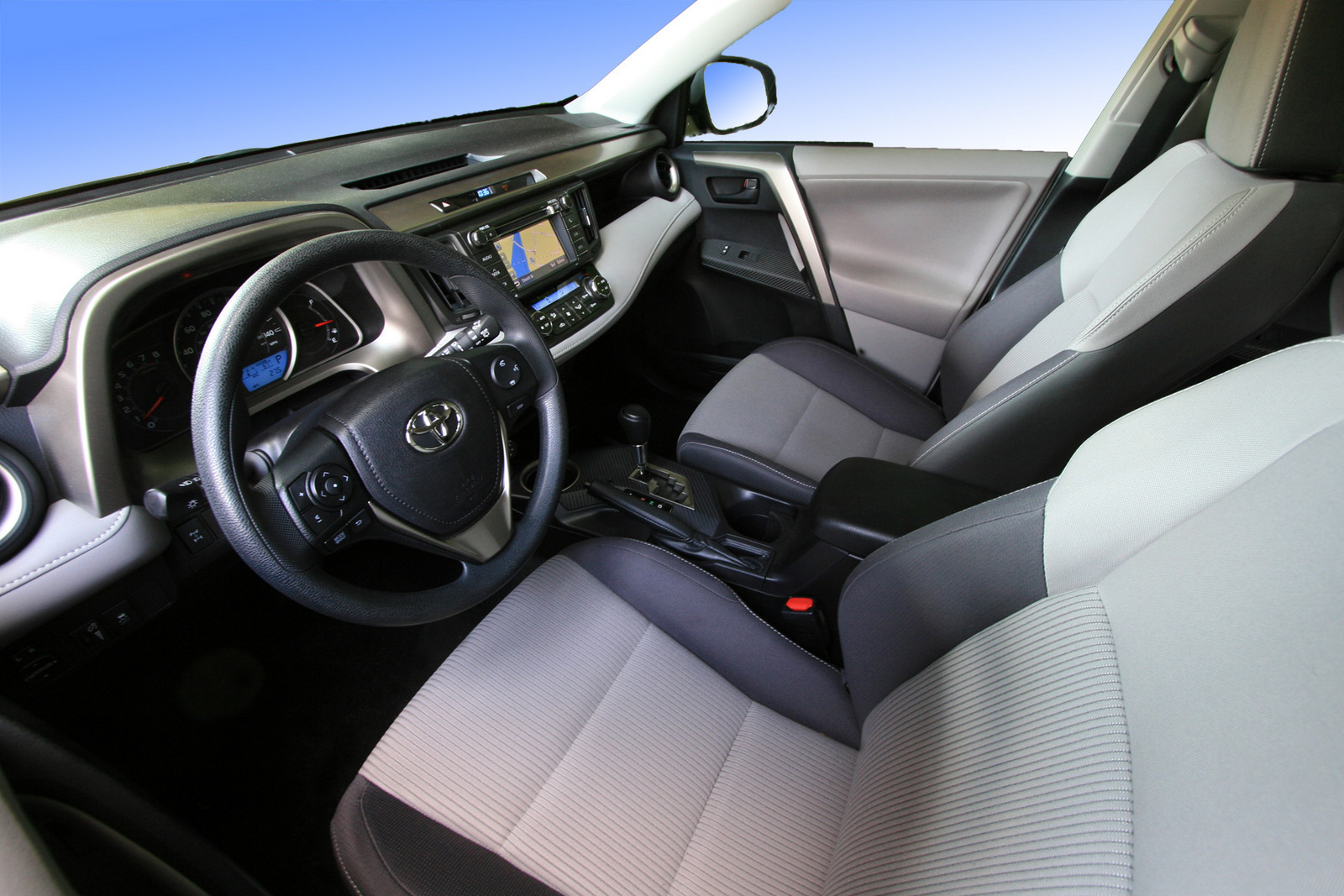 As noted above, the RAV4 is now strictly a 5-passenger ride; the optional and utterly inhospitable 2-passenger third-row seat is no longer available. For those who occasionally need room for a couple extra derrieres, that news won’t likely go over very well. But everyone else will be pleased to know that the redesigned RAV4 feels more spacious than its predecessor.

Starting up front, the driver and passenger are offered spacious buckets that prove plenty supportive during long trips, and, in the case of the XLE, provide extra side bolstering to keep bodies firmly planted in corners. Power adjustments would’ve been a nice addition to my nearly $28,000 tester, but a manual height adjustment, along with a tilt and telescoping steering wheel, allowed me to personalize the setup and get comfortable. The experience would’ve been even better if Toyota had skipped plastering the window sills and most other surfaces with hard plastic. One plus is the mesh headliner, but that ray of sunshine is clouded by cheap vinyl visors and a strip of pleather stretched across the face of the dash—seemingly out-of-place in an interior fitted with cloth upholstery and a low-grade urethane steering wheel. A few soft-touch surfaces would go a long way in the 2013 RAV4 XLE.

While the materials don’t get any better for rear-seat passengers, chances are you won’t hear anyone complaining about the room. I’m on the shorter end of the vertical scale and had a good 8-10 inches of clearance between my knees and the backside of the front seat. The area was a bit more confining for my 6’3” brother-in-law, yet there was still plenty of space for him to feel comfortable. Cushions are on the flat and stiff side, but kudos to designers for adding reclining seatbacks.

Located behind the second row is a 38.4-cubic-foot cargo area accented by a low load floor and wide opening accessed via the top-hinged tailgate. With the seats folded, capacity increased to 73.4 cubic feet. Complementing the expandable trunk are a large glovebox, a small assortment of rubber-lined cubbies and several cupholders. 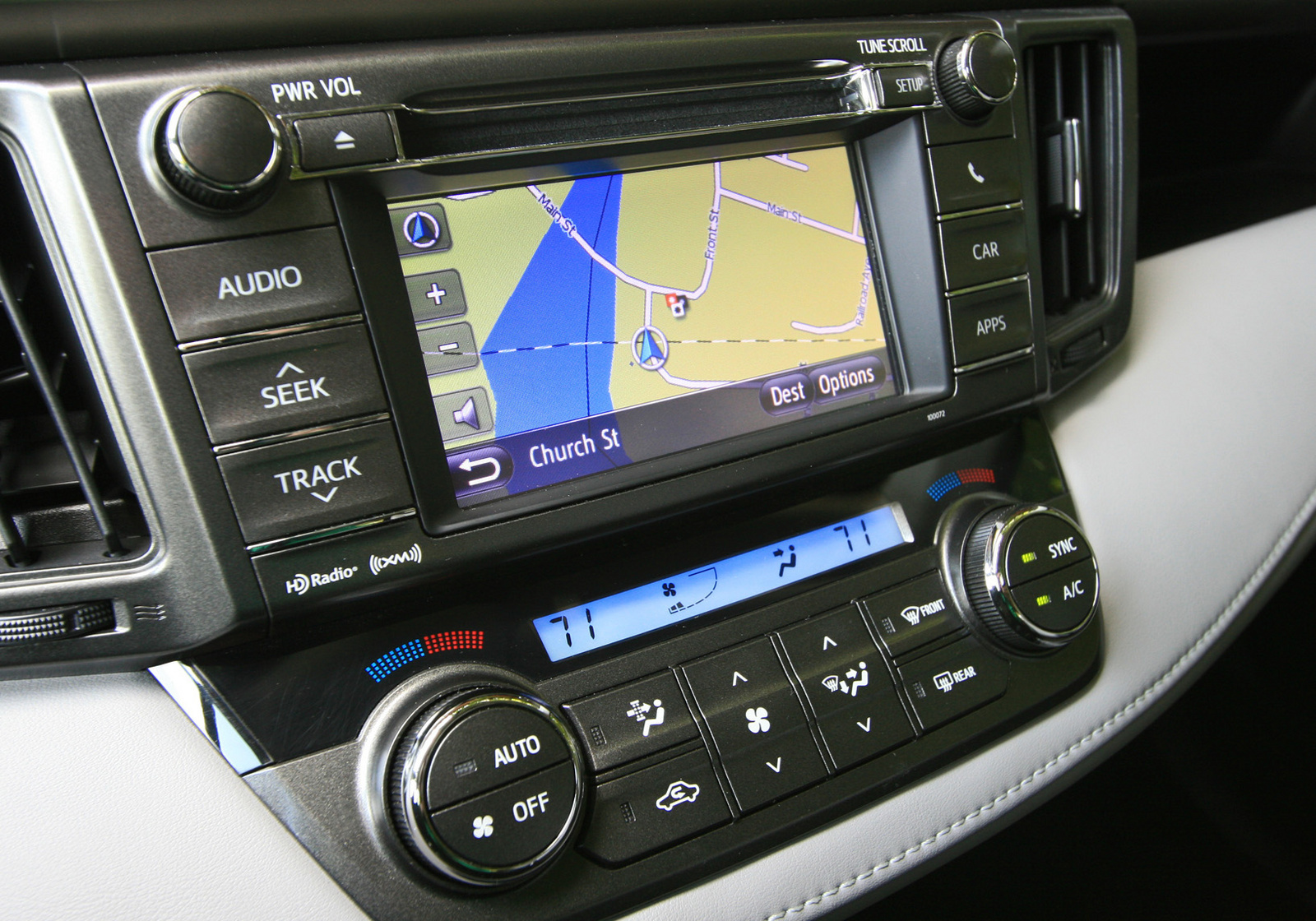 While it may not boast a laundry list of cutting-edge technology, the 2013 RAV4 is offered with a few key features designed to make life easier and more enjoyable for its occupants. Among them are Bluetooth connectivity, the optional blind-spot monitor and, more to the point, Toyota’s available Entune infotainment system.

Using the standard 6.1-inch touchscreen display, Entune operates as a separate interface for specific apps loaded onto a user’s smartphone. These include the Bing search engine, iHeartRadio and Pandora, among others. Unlike competing systems, such as Ford’s Sync, Entune relies on the smartphone to operate, which makes it dependent on strong cell reception and, potentially, a generous data plan.

The whole system requires downloading an Entune app onto your iPhone or Android. Since I didn’t have the opportunity to do that, I instead focused my attention on the navigation system, which I’m happy to report directed me to a remote lakeside camp that hadn’t shown up when I first looked for a route on my laptop. Credit also goes out to the intuitive labeling and layout of the icons and hard buttons. However, those positives were offset by a screen that washed out in sunlight and was especially difficult to see when wearing polarized sunglasses. Even with the brightness maxed out, I needed to shift in my seat to find an angle where I could clearly see what was being displayed. 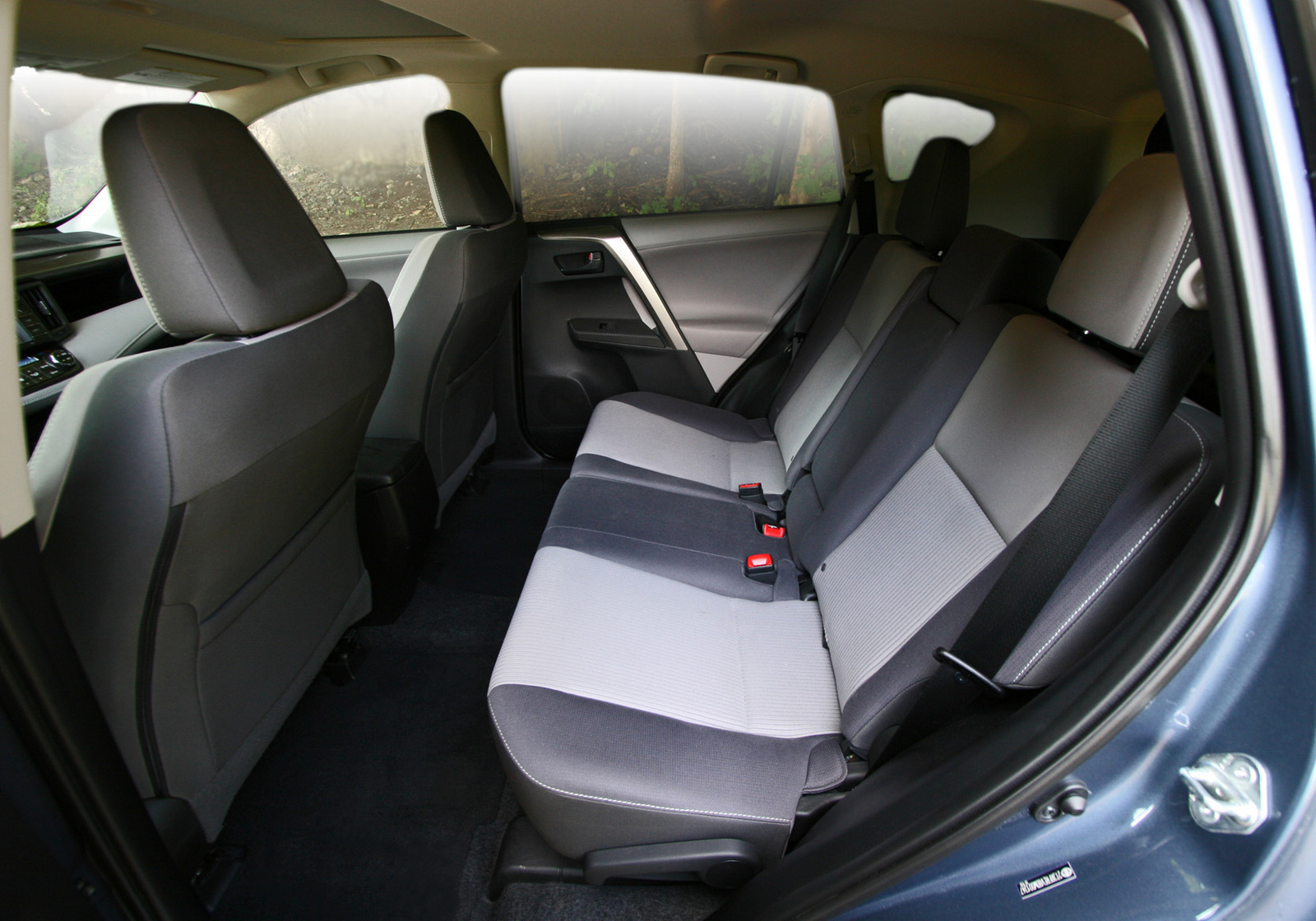 When it comes to basic safety items, Toyota hasn’t taken any shortcuts in the 2013 RAV4. All models leave the factory with 4-wheel antilock disc brakes, 8 airbags, stability and traction control systems, and what the company calls smart stop technology. Introduced as a result of recalls a few years back, this feature cuts engine power when brake and gas pedals are pressed simultaneously. Secondary safety components include the standard rear-view camera and the Limited’s optional blind-spot monitor, which also incorporates rear cross-traffic alert functionality.

That focus on protecting passengers, as well as people outside the vehicle, has led to a respectable 4-out-of-5-star rating from the National Highway Traffic Safety Administration (NHTSA). The Insurance Institute for Highway Safety (IIHS) offers similar praise for Toyota’s small crossover, for the most part. In the majority of the Institute’s tests, the 2013 RAV4 earned the best-possible Good rating, but those results were overshadowed by the worst-possible Poor rating the vehicle scored for its performance in the small front overlap crash test. It’s worth noting that the competing Ford Escape suffered the same fate, while the Honda CR-V fared slightly better and the redesigned 2014 Subaru Forester passed with flying colors.

From a value perspective, Toyotas generally rank among the best. The 2013 RAV4 doesn’t show any indications of mixing up the status quo, with above-average quality and reliability rankings from J.D. Power and Associates, a prediction of excellent resale value from ALG and a competitive warranty that includes 3 years/36,000 miles of basic and 5 years/60,000 miles of powertrain coverage. As an added bonus, the RAV4—like every new Toyota—is sold with 2 years/25,000 miles of free factory-scheduled maintenance, meaning buyers won’t have to shell out their own money for the first few oil changes and tire rotations. Roadside assistance is also part of the program.

Serving to spread a little dust over the RAV4’s luster is a base price that, while competitive, is hundreds more than rivals such as the Honda CR-V and Ford Escape. Additionally, buyers interested in maximizing versatility may find the RAV4’s 1,500-pound towing capacity a little light for their needs, and the lack of a more powerful engine option could further diminish the RAV4’s value in some shoppers’ eyes.

Vendetta I just purchased a 2013 and I love it! I at first wanted the honda cr-v but found the rav4 to be quieter with a better ride and more responsive acceleration.

Users ranked 2013 Toyota RAV4 against other cars which they drove/owned. Each ranking was based on 9 categories. Here is the summary of top rankings.

358 views with 2 answers (last answer about a month ago)

What is your site policy about Test drive? I am a seller.

This problem has happened three times first time on motorway heading home lost speed when three lights appeared, then again Friday lights came on but didn’t lose speed then reset itself Saturday b...

What Is The Problem With The Tire Pressure Light?

The tire pressure light comes on while driving. It flashes, then solid, and goes off. When I had them checked, they said it could not be done, because the tire light was not on at the time. All arou...