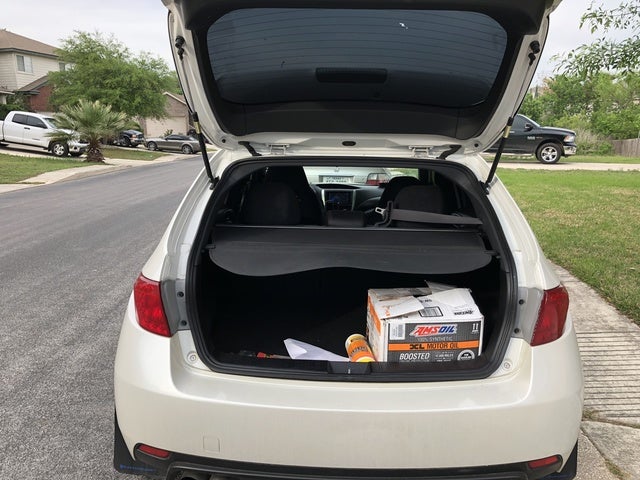 Taking a compact car and screwing it down taut is a proven formula. Tight suspension, stiffened chassis, big brakes and a mill that spits fire mean your mother’s grocery getter is suddenly ready for the track.

Not exactly, but cars like the Lancer Evolution and the Impreza WRX STi definitely make a good show of it. For 2013 there’s nothing new to tell regarding the WRX STi, but that’s not exactly a bad thing. After all, the WRX may have more instances of people calling it perfect than nearly any other car in history. Sure, it’s strayed a bit of late, but a bit off from perfect is a far shot from terrible.

True, it’s softer than it used to be, and the steering feel has drifted away slightly, but that’s a sign of the times. Things will get better soon, yes?

Until then you’ll have to suffer through the current class of compact crazies. For 2013, that means a 305-hp, 2.5-liter turbocharged boxer engine stuffed into the WRX STi, which can push the whole package to 60 mph in well under 5 seconds thanks to 290 lb-ft of torque that show up at 4,000 rpm—right about the time the turbo lag lets up.

Obviously more people desire the STi than we see out on the roads, and Subaru has decided to encourage such cravings with some new tech for 2013. Now you can access their new dynamic online brochure to design your own STi (or regular old WRX, for that matter). Utilize interactive tools to choose options, zoom in on parts and print out your STi to bring it to the dealer, or paste it up next to your bank statements to remind you to start saving.

For those who are ready to buy the ticket, the ride includes that vaunted 2.5-liter engine which peaks up at 6,000 rpm with a maximum of 14.7 psi of boost from the twin-scroll turbo. Available again in sedan or hatch styles, the WRX STi is trying hard to please everyone, although some claim it’s gotten too soft in the process.

Increased driveability isn’t usually a bad thing, except when your competitors really are attempting to be nearly track-ready. For most the STi handles just fine, especially since the 2011 update that added stiffer springs, larger anti-roll bars, new pillow ball bushings on the front lower arms and wider standard tires. Combine all this with symmetrical AWD and a combination mechanical/electronically controlled limited-slip differential, and torque simply goes wherever it’s needed most. Before things get hairy, it defaults to 41/59 front and rear.

A 6-speed manual transmission is the only option here, and that’s an image advantage over competitors like the Evo, which offers a paddle-shifted manu-matic, but the STi suffers from some of the same shortcomings as the Evo—namely looking too much like the car on which it’s based. The Impreza in general and the STi in particular have made efforts to improve interior materials, but at the premium you’ll have to pay to get one, the STi still feels a bit low-rent in the cabin. This is despite standard Alcantara/leather upholstery on heated front seats, a 6-speaker stereo with iPod and USB inputs, Bluetooth, foglights and those iconic 18-inch BBS alloy wheels.

There are, of course, options. A leather-wrapped short-throw shifter should be a no-brainer, while a sport exhaust system will help breathing and really take advantage of quad exhaust tips. Sadly you’ll also have to pay extra for a boost gauge, and there’s no excuse for that.

It’s far too late to lament the last STi. The new one is here, and if this latest iteration has given you fits, just wait until the next one shows up—a vehicle that has been painted with rumors of diesel-hybrid nonsense, amongst other abominations.

What's your take on the 2013 Subaru Impreza WRX STI?

Have you driven a 2013 Subaru Impreza WRX STI?
Rank This Car

Is this a warranty issue or are they going to say its my fault for not checking my oil level,Although I have checked oil and even added some at times.

Is Anyone Interested In A WR Blue 2013 Subaru Hatchback?