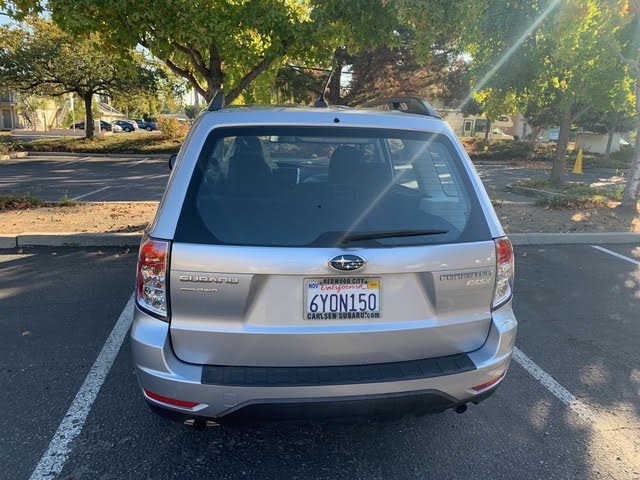 They say it's darkest before the dawn, and with the debut of Subaru's 2013 Forester, we begin to see some of that updating predawn of the next generation, with previously optional features becoming standard for the 2.5X models. But nothing changed in this final Forester of the third generation, unless you're counting the change you would get because you won't have to buy those options at retail. The last 4 iterations of this Forester since the 2009 shedding of its wagon skin have been good to Subaru and its fans, earning it a coveted place among the compact SUV competition for its impressive cargo capacity and cabin comfort. Although road manners, technology and efficiency remain points of concern for some, Subaru hopes to change that in the next generation's start for 2014.

That said, PZEV (Partial Zero Emissions Vehicle) standards are expected to come fully into play for the 2013 Forester, so you may notice some differences in performance in this new model—most especially in the turbocharged 2.5XT editions. The naturally aspirated 2.5X engine is rumored to already be largely PZEV-compliant, so it looks like only the XT will get the more expensive catalytic converters and tweaked ECM programming, but you should expect some discrepancies between the advertised performance and efficiency figures versus real-world experience no matter which level you get into for 2013.

That doesn't mean it should perform worse—to be sure, if you're going to spring for a catalytic converter with that much precious metal, you would expect improved performance beyond meeting the carbon emissions protocol. However, since no 2013 versions are available for testing just yet, nobody knows for sure whether or how the new setup will affect the X's present 21 mpg city/27 highway estimate, or the XT's 19/24. Subaru assures there will be no change, but plenty of drivers have found differently in the past—sometimes pleasantly, but sometimes for the worse, too.

Some of the X models were designated as PZEV for 2012, and while none of the drivers note any significant differences, there are a lot of drivers complaining about poor manufacturing consistency. In other words, Subaru was still working the kinks out for 2012, and several bad apples left the line with some pretty severe problems, ranging from a dead starter to a leak somewhere triggering the Check Engine dummy light, which may not even be separate problems. The 5-speed manual versions seem to work just fine, but the 4-speed automatic not only hampers fuel economy, but is also rife with problematic reviews. Don't expect that to improve much for 2013, since Subaru intends to replace that automatic with a continuously variable transmission (CVT) for 2014.

You can, however, safely expect the same but relatively new 2.5-liter boxer 4-cylinder to send power to all 4 wheels throughout 2013 and 2014, with the familiar 170-hp naturally aspirated version marked as the 2.5X and the 224-hp turbo denoted as the 2.5XT. Premium and Touring remain the only trims for the 2.5XT level, and these carry over into 2013 absolutely unchanged. The stereo and navigation systems from the XT are now standard in the base 2.5X, 2.5X Premium, 2.5X Limited and 2.5X Touring, and the Value Package is updated with the display-type audio system and other options previously available only to the upper tiers. Other than that, it's the same Subaru Forester you could get in 2012, but the last of its kind.

What's your take on the 2013 Subaru Forester?

Users ranked 2013 Subaru Forester against other cars which they drove/owned. Each ranking was based on 9 categories. Here is the summary of top rankings.

Have you driven a 2013 Subaru Forester?
Rank This Car

My Forester makes what sounds like a metal on metal scraping noise randomly only when accelerating, the noise almost sounds like a dust shield scraping the rotor and gets more frequent after drivi...

Recently my little soobie's cel and cruise light came on. I have noticed over last month that the engine has been knocking esp at lower speeds and when under a load (accelerating) and has had slowe...

Tim asked a 2013 Subaru Forester 2.5X Maintenance & Repair question about a year ago

62 views with 2 answers (last answer about a year ago)