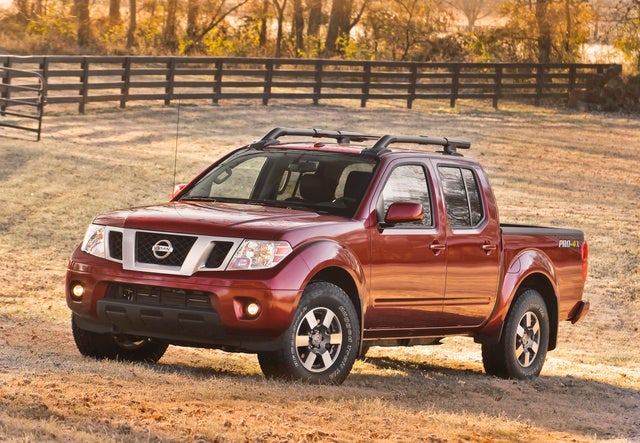 Average user score
3.8 ⁄ 5 stars
Based on 13 reviews
Fantastic Affordable Mid-size Truck by parkerb1454 — Overall it is a great truck for the price. It is an extremely tough truck inside and out. MPG is the only thing that is truly negative about the V6 option. But on that note the 4L V6 gives plenty of p... Read more
**** by 97404 — It is confident to pull 3500 lbs trailer. Nice design. Quiet ride and comfortable seats. Good acceleration, braking and handling. Good stereo. Wind noise with open windows. Should have more small stor... Read more
Review by Guru99CJCY — The truck has a few rust spots that were not pointed out. the underside was painted black so we really could not find anything. engine was cleaned very good so you could not see if it had any leaks ... Read more 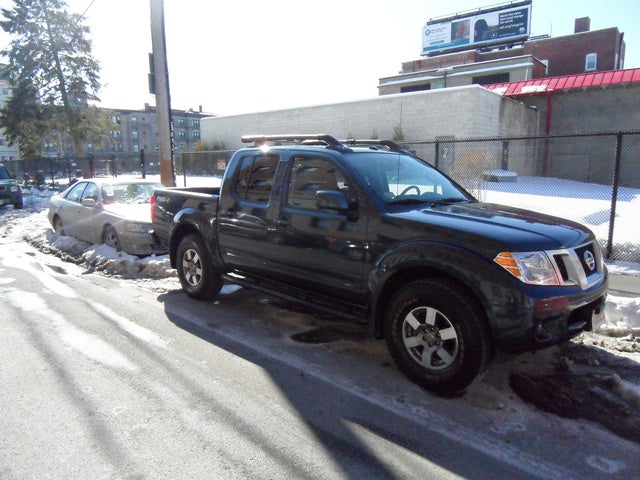 The 2013 Nissan Frontier, long a popular choice in the compact pickup world, picks right up where its predecessors have left off. The market may be closing in a bit with Ford ridding itself of the Ranger and Ram dumping the Dakota, but the Frontier carries on to tangle with the Toyota Tacoma for top-dog honors in the niche.

The Frontier has not changed a whole lot since its debut in 2005, and its interior, in particular, shows signs of getting dated, some experts feel. But Nissan has made a couple of attractive tweaks to the pickup for 2013.

To begin with, the company has done a little price cutting with the 2013 Nissan Frontier. The base S trim now starts at just under $19,000 and at various steps along the way consumers can save from several hundred dollars to a few thousand when compared to the previous price structure. At the same time, Nissan has been able to squeeze slightly better fuel mileage out of the 2013 Nissan Frontier by reducing engine friction and improving the vehicle’s aerodynamics.

Those adjustments add to the already considerable appeal of the 2013 Nissan Frontier. A perky V6, comfortable front seats, decent handling and a wide-ranging array of trim offerings and setups are among the pickup’s strong points.

Quarters are tight in the rear seats of the 2013 Nissan Frontier, though, and reviewers do find fault with the less-than-impressive quality of materials in the cabin and say the ride can be a bit rugged at times.

Engine choices for the 2013 Nissan Frontier start with a 2.5-liter 4-cylinder good for 152 hp. Most reviewers give little mind to the 4-cylinder, though, and tout the V6 as not only the best option but plenty of motor at 261 hp and 281 lb-ft of torque. No V8 is available, and none is needed, they say. The maximum towing capacity of the 2013 Nissan Frontier is 6,500 pounds.

Fuel economy for the 2013 Nissan Frontier with the 4-cylinder and rear-wheel drive (RWD) is 19 mpg city/23 highway. The V6 checks in at 16/22 with RWD and 15/21 with 4-wheel drive (4WD). Experts commend the way the engine works with the automatic transmission offered. They like the clutch feel of a manual that’s available, too, but note that it does have long throws.

The 2013 Nissan Frontier works its way up the trim line from the base S to SV, SL and PRO-4X models. Most trims are available with RWD or 4WD and with King Cab or Crew Cab body styles.

The 2013 Nissan Frontier S is a rugged, no-frills workhorse and has neither power windows, air conditioning nor tilt steering. The SV gets power features, tilt steering and cruise control, and Bluetooth connectivity has been added for this year. The SL ups the ante with heated leather seats, tie-down cleats in the bed and a Rockford Fosgate sound system with 8 speakers.

The 2013 Nissan Frontier PRO-4X is all about off-roading and features skid plates, upgraded off-road shocks and huge trail tires. A new Desert Runner model is much like the PRO-4X but comes in RWD and with an automatic transmission.

The 2013 Nissan Frontier grades out well in relation to other compact pickups in safety tests. It comes with standard 4-wheel antilock brakes along with traction and stability control, and all trims have a full array of airbags. A backup camera and parking sensors have been added for many trims for 2013.

What's your take on the 2013 Nissan Frontier?

Have you driven a 2013 Nissan Frontier?
Rank This Car

None Of My Power Windows Will Work.

Just bought a 2013 Nissan Frontier. None of the power windows work. Checked the fuse it looks fine. Help!

I have P265/70R16 on my 2013 Crew cab Nissan Frontier. I would like to use a larger diameter. An recommendations