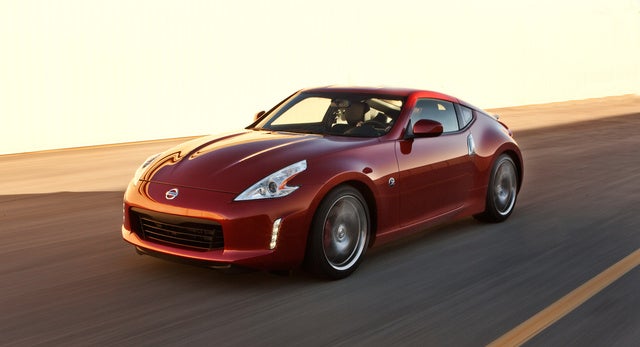 About all that’s notably new for the 2013 Nissan 370Z is its forward profile, and even that doesn’t find its way to the sportiest of the five trims. Those trims, incidentally, again comprise the Base, Touring, Roadster, Roaster Touring and the racy NISMO. In any case, this year’s look features the deletion of the front extensions once part of the grille assembly, leading to a simpler grille/front fascia appearance. Additionally, LED daytime running lights, running vertically rather than horizontally, are also standard for 2013. Despite these cosmetic upgrades, this quasi-venerable 2-seat sports car is beginning to show its age, according to many in the automotive media. Reviews do, however, concede that Nissan is usually right on top of things when various trims beg for a refresh, and predict a more comprehensive upgrade for the 370Z lineup in a couple of years or so. Nevertheless, this sporty little 2-seater continues to impress with its spiffy (if a bit dated) styling, ageless agility and potent performance.

The surprisingly refined Hyundai Genesis Coupe and the Euro-styled BMW 1 Series are still firmly entrenched in the price range occupied by Nissan’s evolved sports car offering. Additionally, such rivals as Chevy’s resurgent Camaro, Dodge’s retro-leaning Challenger and Ford’s re-released Mustang all hope to unseat their Asian competition. All of the above choices are, of course, 5-passenger offerings and thus represent a somewhat more practical sports-oriented automobile for growing families.

In any case, the 2013 370Z retains its standard (and only) engine, the pleasingly peppy 332-hp 3.7-liter V6. A trim-based selection of transmissions includes the 6-speed manual found standard in the Base and the NISMO, which is also available to the Touring edition of the Roadster. A 7-speed shiftable automatic (with steering-wheel-mounted paddle shifters) is once more standard in the Roadster Touring trim and available to the Base. No matter the gearbox, look for 270 lb-ft of torque out of the V6, with EPA estimates of 18 mpg city/26 highway with the stick shift and 19/26 from the automatic.

The Touring and Roadster Touring are again expected to add Alcantara and genuine leather upholstery, heated power-adjustable seats, a universal remote garage door opener, electrochromatic rear-view mirror and 240 watts of Bose premium sound with, this year, 8 speakers, including a pair of subwoofers. Satellite radio ought to remain standard, too, as should the Bluetooth hands-free communications system. Frankly, about all the NISMO is expected to add to the Touring presentation are premium cloth upholstery and the Sport Package with its 19-inch alloy wheels, limited-slip differential, sport brakes, a rear spoiler, front chin wind deflector and underside aerodynamic treatment. This spiffy package, meanwhile, is optional for both the Roadster and the Base.

Further options for the 2013 370Z lineup include a downshift-rev-matching system for the 7-speed automatic, carpeted floor mats and illuminated kick plates. Touring editions and the NISMO likely will remain eligible for such extras as a rear-view camera and a hard-drive-based navigation system.

Users ranked 2013 Nissan 370Z against other cars which they drove/owned. Each ranking was based on 9 categories. Here is the summary of top rankings.

Or wait it out for something better

109 views with 2 answers (last answer about a year ago)