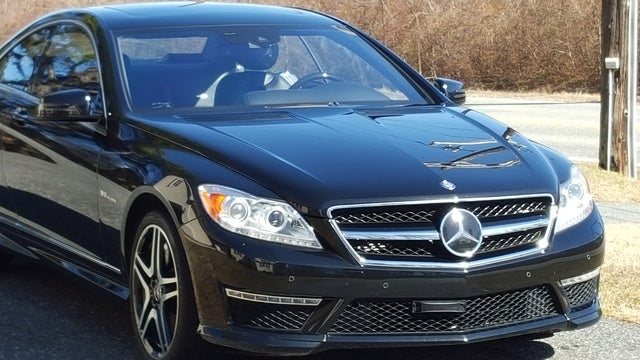 Although Mercedes-Benz is better at keeping secrets than its Daimler-Chrysler partner, the introduction of a Grand Edition Package for all CL-Class trims that adds 3 exclusive exterior and interior treatments for 2013 is a dead giveaway to the CL-Class's future. If you don't live and breathe cars, this minor change is easily thought of as just that—a minor change—but the addition of this special-edition cosmetic package is just one of the big reasons this reviewer says 2013 is the last time you will see the CL-Class precisely as it is right now.

Way back in 2009 Daimler-Chrysler claimed a CLC nameplate, and this had some glossies calling for the addition of a convertible body style in the CL lineup. More recent reports indicate the nameplate is reserved for a totally different wagon-based lineup, but recent rendering leaks of a smaller but S-Class-like convertible are keeping the debate alive. Especially since official Mercedes-Benz reports state a CL-Class redesign is imminent, and it will be based on the all-new 2013 S-Class. The lack of 2012 and 2013 changes after a mechanical overhaul for 2011 plus this new cosmetic package (something almost every luxury maker does just before a major overhaul) indicates 2014 will be the year of the big shift. Whether the long-rumored convertible will join the lineup at the outset is another matter altogether.

For 2013 the CL-Class remains essentially unchanged over the 2012 edition, but nothing needed to change. This is a coupe whose only detriment is a 6-figure price tag, something drivers note is negotiable but still sometimes a bit steep for their taste. Otherwise every facet of this lineup, from the baseline CL550 4MATIC on up, is nothing short of awe-inspiring, and that certainly lessens the financial bite.

Drivers accustomed to luxury sport performance expect their seats to hold them in place, but the CL-Class takes that a step further with an automatic side bolster to hug you in place through turns. Voice recognition technology flawlessly takes care of just about every function in the car, but if your voice is feeling a bit under the weather, every gauge and button is intuitive and readily accessible without taking your eyes off the road. Unlike certain up-and-coming luxury makers, Benz's MBrace2 infotainment system allows Google Maps to send destination info to its navigation system for tried-and-true and effortless functionality.

Indeed, effortless may well be the CL-Class's motto. Effortless acceleration. Effortless stability. Effortless use of creature comforts. Is it any wonder the CL-Class receives nothing but praise? Even its tailpipes join in the praise-singing. The V8 and V12 twin-turbo quartet of engines powering the CL lineup are offered with a 5- or 7-speed automatic, depending on which behemoth you choose, the CL550 4MATIC's 429-hp and 516-lb-ft/torque V8, the CL600's 510-hp and 612-lb-ft/torque V12, the CL63 AMG's 536-hp and 590-lb-ft/torque V8 with start-stop tech, or the CL65 AMG's 621-hp superbeast. The CL-Class provides all-wheel drive in the CL550 4MATIC only and rear-wheel drive otherwise.

Since there isn't a mechanical dud in the bunch, with zip-to-60 mph times for even the CL550 no more than 4.6 seconds, having fun is a given. The CL65 AMG arrives at 60 mph with the quickest 4.2-second time, but it and the CL600 both fetch just 12 mpg city/18 highway, whereas the CL63 AMG does a bit better at 15/21, and the CL550 does best at 15/23. Each has an impossible-to-describe character all its own, and only a test drive will truly tell which one Mercedes-Benz made just for you.

What's your take on the 2013 Mercedes-Benz CL-Class?

Have you driven a 2013 Mercedes-Benz CL-Class?
Rank This Car