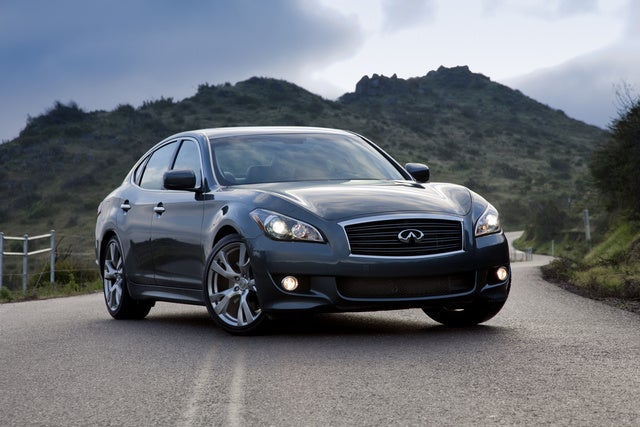 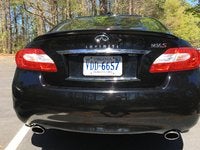 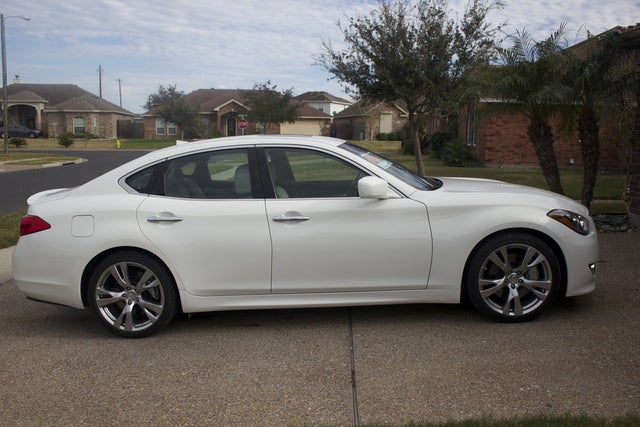 Moving into 2013, Infiniti's highest tier of its flagship midsize M sedan benefits from the same updates as its small-block brothers while gaining some new inclusions to option packs that were already available for 2012 and just became available to all-wheel-drive (AWD) versions for 2013. Apparently the glaring lack of complaints has allowed Infiniti some room to sweeten the deal on an already drool-worthy lineup featuring stylish looks, awe-inspiring cabins, cutting-edge technology, rip-roaring performance and even fuel efficiency with the addition of a remarkable hybrid for 2012.

Believe it or not, side by side that M35h hybrid performs no differently from the V8-powered M56. Well, unless you count fuel economy as part of performance—in that case, the hybrid wins hands down with an impressive 27 mpg city/32 highway. However, if you count the engine's song as part of its performance, the beefy 420 hp and 417 lb-ft of torque roaring out of the tailpipe of the M56's V8 beats the M35h and its whiny Vehicle Sound for Pedestrians (VSP) module any day, though it means sucking up and dealing with an expectedly unimpressive 16/25 mpg at best.

Nevertheless, both accelerate to 60 mph from a standstill in just over 5 seconds, and both offer the same sporting small-car feel, but the M35h comes with a firm sporty ride by default and only rear-wheel drive (RWD), whereas the M56 can be had in a more touring form, and its sporty side is now available to AWD M56x buyers for 2013.

Like every other 2013 M the M56 and M56x also gain auto-dimming side-view mirrors and an automatic trunk cincher to make closing the lid on those 15 cubic feet of cargo space a bit easier. For those especially taken by this beauty's derrière, the Premium Package now includes a rear sonar system to keep it beautiful and Infiniti Connection for immediate assistance—among other things, of course, as is typical of today's infotainment systems.

With an engine second to none in its premium-fuel class for rip-roaring power balanced with fuel efficiency, more technology than you could fit in a phone book and impeccable style inside and out, the M56 would be a rare breed even before you consider its responsive yet supple dynamics and cavernous room for 5. Infiniti isn't exaggerating in its advertising—the M56 truly does challenge the status quo of luxury. Taken as a whole, Infiniti's M series really should be considered a class of one, but I think that might break some law somewhere. This trio is a remarkable set worthy of at least a spot on your short list.