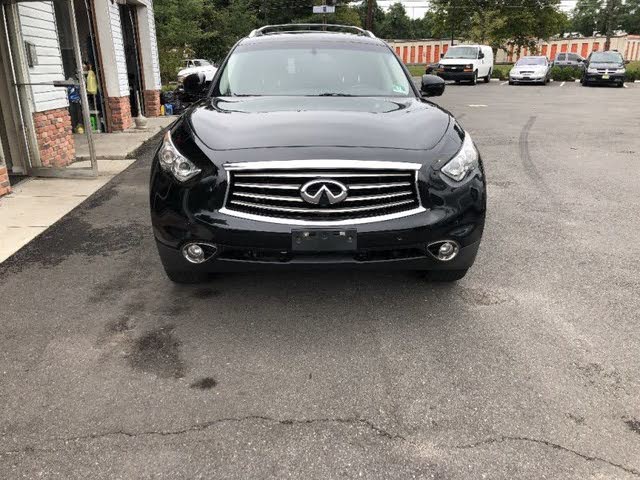 Looking for a Used FX37 in your area?

Totally redesigned for 2009, then slightly restyled for 2012, the FX35 morphs into the FX37 for 2013 thanks to an engine upgrade. Outshined by its 390-hp V8-powered bigger FX50 brother, Infiniti hopes to properly emphasize its sport-over-utility mantra with a new 325-hp 3.7-liter V6 engine for 2013, over the previous 303-hp 3.5, but routed through the same 7-speed automatic transmission that's carried over since 2009. Most drivers have to pinch themselves every time they drive their FX, but more than a few feel less than safe in the V6-powered FX thanks to that shift-happy transmission.

Whether the 2013 FX37 has the same transmission issues noted by drivers of previous V6 editions is yet to be seen. Although the 2013 FX37 landed in North American dealerships several months ago, not a single magazine or driver has offered a hands-on review, and Infiniti is staying mum on the subject. Several web sources haven't even bothered to cover the FX50's little brother in years, further indicating beyond the constantly ahead-of-schedule changes that the V6-powered FX is stuck in a steep sales dive. Could the 2013 FX37 be the beginning of a new golden era? Only your own test drive specifically looking out for inopportune gear shifts will tell for sure at this point.

Transmission aside, the FX is a consistent 5-star SUV. If you've ever witnessed an Infiniti SUV ripping along tightly curved onramps at 60 mph right on the tail of your sport-tuned sedan, then you already know what everyone is raving about. If you haven't seen it, the choreographed dance between the double-wishbone independent front suspension and multilink rear is absolutely nothing short of a beautiful thing to watch and a real thrill to drive. Standard 18-inch alloy wheels raise you up to typical SUV height, but aside from that there's very little indication you're driving anything other than a refined sports car.

You can also forget you're driving an SUV with just 62 max cubes for cargo, or 25 cubic feet with the rear seats in use. Those rear seats aren't as roomy as you might imagine for such subpar cargo room, either, lacking in legroom for any of the 3 rear passengers taller than the average Japanese adult. Even the road-hugging rugged ride is indicative of a sports car, complete with a distinctly audible thump in the cabin should you opt for the 20-inch tires.

Available in a 52/48 weight ratio with the default rear-wheel drive (RWD), or a slightly less-balanced intelligent all-wheel drive (AWD), whether you spring for the AWD Limited Edition or just the AWD FX37, this weighty machine offers a 2,000-pound towing capacity with the AWD system and very likely worse economy than the 16 mpg city/23 highway of previous years. Since outward visibility can get tricky with the FX's raked roof, the 360-degree Around View monitor standard for the FX50 is simply optional for the FX37, but now features Moving Object Detection for improved passive safety. Aside from a few exterior and interior color shuffles, that new engine and the obligatory new name, the 2013 FX37 is identical in every way to the 2012 FX35.

GuruX39T4 Wow thank because I'm a little nervous to purchase one.

Users ranked 2013 INFINITI FX37 against other cars which they drove/owned. Each ranking was based on 9 categories. Here is the summary of top rankings.

Looking for a Used FX37 in your area?