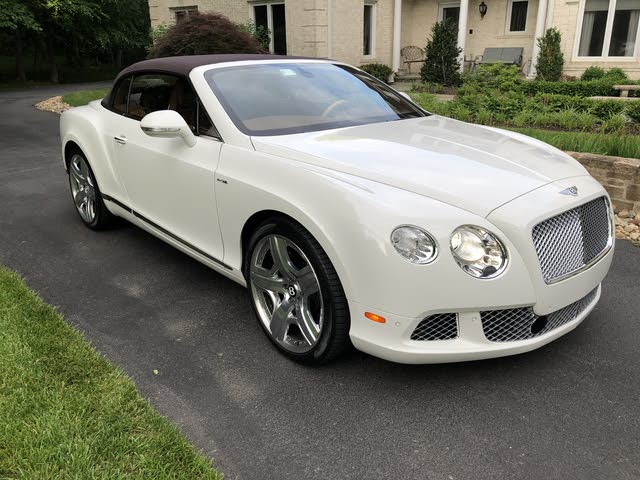 Could too much of a good thing turn sour? Bentley doesn't seem to think so, as the maker expands its entry-level Continental GT lineup for 2013 to include a tweaked version of the new twin-turbocharged V8 Audi's using in its 2013 S lineup, appropriately dubbing it the GT V8. The entire line went under the knife for this 2013 debut, but excepting some streamlining, the base GT remains relatively unchanged.

Aimed at the driver-owner who simply doesn't like to stop for fuel, the GT V8 affords significantly improved fuel efficiency for a long 500-mile stride and a slightly lower entry fee with almost imperceptibly less performance—unless the especially satisfying growl from its two-pair figure-8 exhaust pipes is the sort of performance you prefer. In that case, the new 4-liter, 500-hp, 486-lb-ft torque V8 is certainly a top pick, although the 6-liter, 567-hp and 516-lb-ft torque W12 paired with a 6-speed paddle-automatic in the Base retains certain bragging rights.

The interior of the GT V8 is slightly downscale from that of the incumbent Base model, but it was redone in the spirit of weight reduction. One less armrest here, some materials changes there, and voilà—a 2-and-a-half-ton car that moves to 60 mph in 4.8 seconds. The Base is just two-tenths faster, and each of their corresponding convertible cohorts fetch negligibly different results.

However, the convertible Base and GT V8 do feel the pinch in efficiency, being 1 mpg thirstier around town than their coupe brethren. The Base coupe maintains its 12 mpg city/19 highway rating, but the new GT V8 coupe gets a remarkable 17/26 on premium fuel. You can easily expect a 5-10 mpg dip should you need to settle for E85 with the Base trims' Flex-Fuel capabilities, but certain driving habits could see that number jump up about 5 mpg for the GT V8.

This would be a result of the cylinder shut-off technology that enables the GT V8 to run on 4 cylinders when cruising under a light load. Longer trips with fewer needs to accelerate will really help this engine sip. Further efficiency tech includes low-rolling-resistance tires, battery recuperation when decelerating and an 8-speed automatic transmission with paddle shifters—not that the GT V8 will let you bounce off the redline or downshift aggressively enough for track performance, but the added manual functionality is useful in civilian driving conditions.

The 2012 edition set the precedent for the Continental GT's all-wheel drive with a sporting rear bias, and the GT V8 is no different. However, as previously mentioned, it's no more geared for track performance than the base GT. Sure, the suspension handles anything you can throw at it, even at its 180-plus-mph top speed, but the transmission is not made for engine-braking into corners or holding a lower gear for more torque. That said, this same engine in the 2013 Audi S6, S7 and S8 delivers a thrilling peak torque plateau from roughly 1,500 to 5,500 rpm. So far Bentley is mum regarding how much of that transfers to the 2013 Continental GT V8.

What's your take on the 2013 Bentley Continental GT?

Have you driven a 2013 Bentley Continental GT?
Rank This Car

Recommendation For Wrap Removal On A Bentley Continental GT Coupe

I purchased a 2013 Bentley Continental GT Coupe that has matte black wrapping on the sides. The hood, top and trunk are shiny black original paint. We want to remove the matte wrap to have the car b...