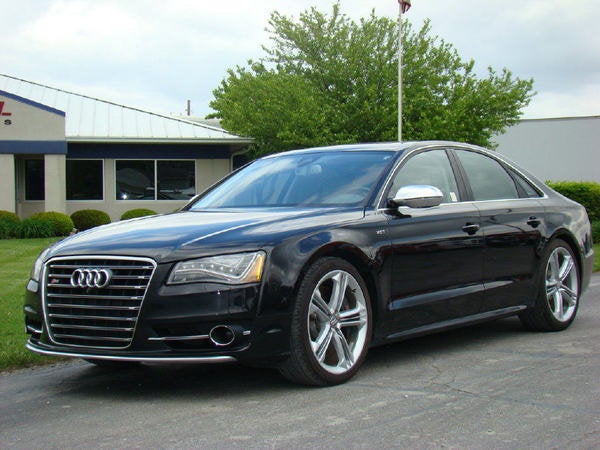 It’s big, it’s fat, it’s fast—it’s a German GT for an American audience. Somehow, Audi got this complicated concoction right with the S8, but it’s safe to say a lot has to do with the 4.0-liter, twin-turbo V8 that does the motivating.

Four liters doesn’t seem like much when faced with the task of hauling 4,400 pounds of sedan around, but 4 liters don’t mean what they used to. Today, a foundation like that can be built into a 520-hp, 479 lb-ft street shredder, and it’ll still return a decent mileage rating. Of course decent is relative, but with estimates coming in of 15 mpg city/24 highway, it has to be remembered that just a few short years ago such combinations would’ve been considered laughable rather than possible.

For those paying attention, the S8 was previously powered by a naturally aspirated, 5.2-liter Lambo V10, and despite dropping two cylinders and more than a liter of displacement, cylinder deactivation and forced induction account for a power and efficiency increase alike. Who was it that said you couldn’t have your cake and eat it, too? Apparently there's an addendum to that rule if you’re willing to pay more than 100K for your cake.

Now, there are problems when you cut out half the cylinders from a V8 engine, and it doesn’t take a lifelong car obsession to identify the acoustical advantages of a V8 over your average 4-cylinder. Addressing that disadvantage, Audi has fitted the 4.0-liter engine with active damping mounts that produce vibrations to counteract the imbalance that occurs when running at half power, and the stereo will even pump soundwaves into the cabin to trick your ears into thinking nothing is out of place.

Still, it feels sort of wrong.

Thankfully it sounds right, and once you stomp on that accelerator, the S8 will give you no indication that anything is amiss as the 8-speed automatic snicks through its cog-swapping duties with rapidity. And then there’s the power delivery, which serves up peak torque at just 1,700 rpm and continues pouring it on until 5,500, just 300 rpm short of peak horsepower. Add it up and the sum is more than enough to deal with the considerable heft of the S8, so much that you’ll forget its 2 tons as you zoom to 60 in a reported 4.2 seconds. Unfortunately, reality comes knocking when you try to turn.

Understeer and body roll are unavoidable here, and while the 40/60 torque split and vectoring rear differential will allow you to compensate slightly, doing so would be to ask the S8 to be something it’s not: a sports car. This is a car meant to soak up miles, not chew through corners. Even with Audi Drive Select set to Dynamic mode, which firms up the suspension, and tightens the throttle response and steering, the S8 still reminds you of every one of its 4,400 pounds.

But the S8 has never been about showing off, as much as that can be said for a car that runs on standard 20-inch rims. Most will be unable to distinguish it from a garden-variety A8—with only the grille, mirrors, V8T fender badges and quad exhaust to distinguish it. Inside the subtlety continues with sport seats you can actually get in the A8, a red-ringed start button and gray gauge faces with white needles. Of course, trim options here are unique to the S8, so you can customize at your discretion.

Big, fat and fast is a rough balance to achieve, and the 4.0-liter does it ever so much better than the old V10, which always felt like too much manic violence here. The V10 fits in a lithe little midengine supercar, but in the S8 it felt like giving meth to a mammoth. The S8 was lost, but now has been found.