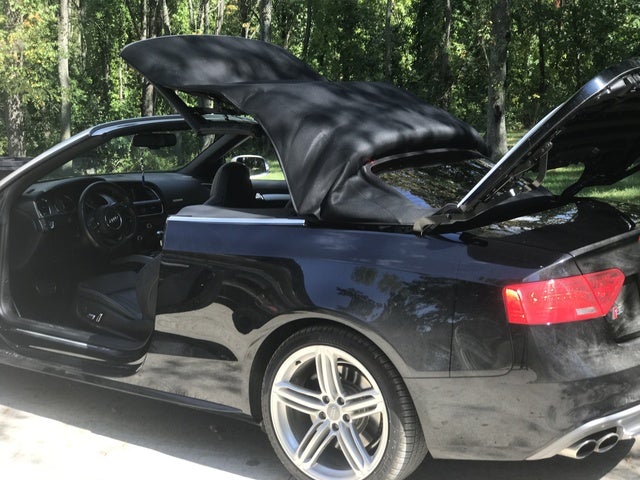 Average user score
4.8 ⁄ 5 stars
Based on 9 reviews
Review by Alex — I took 2013 Audi S5 for a test-drive. It drives great. Very powerful. And very comfortable. Read more
Review by Paul — Great car! I have owned audis in the past. They are great cars. Read more
Review by GuruR856S — Great! Car in good condition and I recommend anyone Read more

2013 will go down in history as the year the Audi S5 finally got fully blown. Sorry, V8 fans, there’s nothing to see here—the 4.2-liter V8 we’ve all loved so much is no more, as the S5 coupe adopts the supercharged, direct-injected V6 of the S5 cabriolet.

But is that a downgrade? Well, not so much. If you’re looking solely at the numbers, you’re going to be disappointed. In addition to the 2-piston loss, the 3.0 produces 333 hp—21 fewer than the 4.2—but torque numbers remain identical at 325 lb-ft. Finally some good news. But what the 8-cylinder crew may have missed is that the same 325 lb-ft arrive 600 rpm earlier with the 3.0, all the way down at 2,900 rpm, and those 333 horses stampede at just 5,500 rpm, as opposed to 7,000 in the V8. I’m no mathematician, but I like my power down low in a daily driver. Testers seem to concur so far, and while lamentations for the loss of the V8 are expected, reports are trending that the V6 simply feels more appropriate in a German vehicle. The big V8 was a bit too crass, a bit too American, and the V6 is significantly more efficient, too, with an estimated combined fuel consumption floating over 29 mpg.

Still, the loss of the V8 is sure to cause complaint, perhaps enough to overshadow the adoption of electric steering in the S5 this year. Not that we’d suggest the timing of the two changes are related, plus Audi has been a leader in the electric steering category, with a feel and feedback that best most rivals. This system has been pulled from the A6/7 setup and tweaked slightly, which means it's even better than before. It also means the S5 can gain features like the optional dynamic steering system, which modulates the ratio and can even steer the S5 out of hairy situations, automatically correcting under- or oversteer so your Sunday drive doesn’t end early. If you go for the dynamic steering, you can also splurge for active lane keeping, which will keep you between the lines even if your attention is elsewhere.

After all, you wouldn’t want to mess up the new front end Audi slapped on your S5, would you? A redesigned grille sits in a more aggressive fascia, flanked by sharp new headlight housings with the now-familiar LED tube surrounds. The rear gets the same lighting treatment, but otherwise DeSilva’s design remains mostly un-mangled.

Inside the changes are similarly subtle, but all improvements. The Multi Media Interface (MMI) is simplified with half the buttons of previous iterations, and the newest version of Audi Connect means Google Earth navigation is added with 3D display and a mobile Wi-fi spot, as long as you insert your own SIM card. That means charges for you, and a loss of functionality when you leave a service area, but it’ll simply revert back to normal display in that case.

New steering wheels are stolen from the A6 and A7 and feature gloss black accents. There’s even a flat-bottom option. New aluminum trim ties inside to out, and further button consolidation keeps things clean. That’s what we like to see. Air conditioning controls and displays get white illumination for better visibility, and there’s a list of new upholstery colors and trim options, including aluminum trigon, walnut or natural fine-grain ash.

However, one feature many reviews are glossing over is the addition of the torque vectoring crown-gear center differential and optional sport rear differential from the RS5. You’ll need to check the boxes for the Quattro system and the S-tronic 7-speed transmission to take advantage, however, which will be a point of contention for those of us who still enjoy changing gears manually. If the 3-pedal 6-speed is a necessity for you, you’ll be stuck with the coupe. Cabriolets come only with the dual-clutch S-tronic.

The suspension gets a once-over as well, with revised damping and new mounting locations for the rear control arms, both intended to increase compliance in the rear end with regard to direction changes. Overall, testers haven’t noticed much of a difference, but we sure appreciate the effort.

In all, the S5 was great already, and the 2013 version's a bit better. We’ll hear the cathartic cries and melancholic moans for the V8 that once was for years to come, but some people are never happy. Besides, the RS5 still runs on all 8 cylinders, and it’s only an extra 10 grand or so for each extra piston.

Users ranked 2013 Audi S5 against other cars which they drove/owned. Each ranking was based on 9 categories. Here is the summary of top rankings.