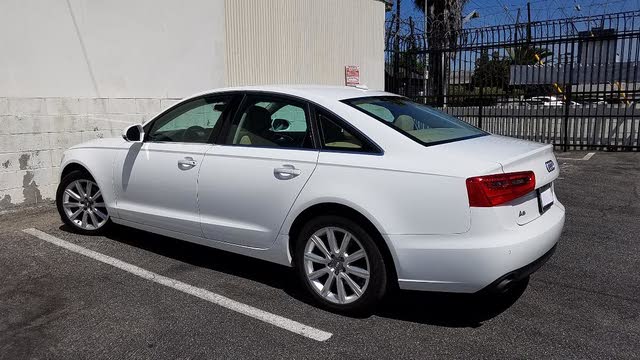 The Audi A6, squeezed a bit at times in the luxury car market and sometimes even in its own upper-class family, takes a step or two toward breaking out and forging more space for itself with its 2013 edition. In the past it’s been less a case of reviewers raising issues with the A6 and more that other impressive vehicles, Audi’s A4 and A7 among them, suck up much of the available air and attention.

The 2013 Audi A6 aims to adjust the equation and accomplishes that in part by starting at the beginning and beefing up its base trim. Among the factors holding the Audi A6 2.0T back, some reviewers feel, has been that the more powerful and top-of-the-line Audi A6 3.0T received perhaps more than its share of the performance frills.

For the first time, the base version of the 2013 Audi A6 Premium is available with the manufacturer’s popular Quattro all-wheel-drive (AWD) system. Previously, buyers had to step up to the trims featuring the 3.0-liter engine to get AWD. In addition, buyers of the 2013 Audi A6 2.0T can now opt for an 8-speed automatic transmission, a major plus, say the experts who are not enamored of the continuously variable transmission (CVT) that still comes standard in the base version.

The 2.0-liter turbocharged 4-cylinder engine still standard in the base trim, good for 211 horsepower and 258 lb-ft of torque, may not pack enough punch for some buyers, but does boast a major selling point: With the CVT and FWD, the setup rates at 25 mpg city and an eye-opening 33 mpg highway.

The 2013 Audi A6 3.0T with its supercharged V6 that gets 310 hp and 325 lb-ft of torque at 19 mpg city/28 highway and its new stop/start technology will surely remain the A6 of choice for many, but the upgrades available for the 2.0T models have leveled the playing field at least a bit. Both Audi engine choices have turbo fuel stratified injection (TFSI), a system that combines supercharging with direct fuel injection for the purpose of greater power output, better performance and lower fuel consumption.

Bottom line, Audi continues to crank out fine models that continue to keep the pressure on the luxury products offered up by the likes of BMW and Mercedes-Benz right across the board, in performance, looks and value.

The 4-door 2013 Audi A6 seats 5 and, to be sure, has its fans while it fights to hold its ground both in the market overall and in the larger Audi picture.

Reviewers generally like the way the 2013 Audi A6 rides and handles, thanks in part to electromechanical steering and Audi’s Select Drive system. The vehicle’s cabin, which draws comparisons to the well-regarded interior of the Audi A7, scores high marks for spaciousness, comfort and quality of materials, amongst other aspects. Technological upgrades in recent years, including to the A6’s navigation system, have impressed the experts, too.

JR Just bought the 3.0 and this is an awesome car. All the tech features you could possibly want... super quick... great ride and handling... eye popping looks... and I got 30 mph on the highway doing 70 mph although you will be up to 80 or 90 and not even know it.

Users ranked 2013 Audi A6 against other cars which they drove/owned. Each ranking was based on 9 categories. Here is the summary of top rankings.

Cannot Add Photo To My Ad--

Cannot attach a photo to my ad--I drag and drop but it creates a separate page and does not attach to my ad.

How Much Is Shipping

Is there car shipping

Guru7NSYB asked a 2013 Audi A6 General question 2 years ago

I Will Go To My Bank For Any Car Loan After Seeing Interest Rates Online!

What Happens If I Put 87 In A Car That Takes 93 On A Regular Basis?

I used my boyfriends car and wanted to put gas. I put 87 regular instead of 93 super.

Interest Rates From Your Site, Where Do You Get Them?

Where do you get interest rates from? On older cars they seem to be looking for about 7% , yet you show a 2.99% rate. Where does that come from?