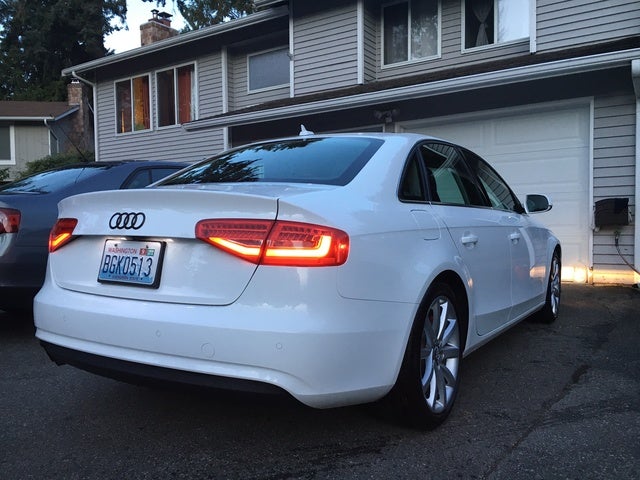 Average user score
5 ⁄ 5 stars
Based on 6 reviews
Powerful, Efficient, Fun Ride! by TDIEnthusiast — I love my Audi A3! I got it two years ago and absolutely love everything about it!! It handles beautifully and have had no issues with it . The MPG's are amazing and I have gotten OVER 45 mpg on the... Read more

The whole spectrum of fate for the 2013 Audi A3 is still a huge mystery given the confusion of Euro-spec models over when and what will arrive States-side, but it looks like the 2012 will carry over until the mid-year debut of an all-new A3 available only as a sedan. So if you need the wagon, better get the next one you see—there are no plans to continue production of any hatchback body styles for the U.S. A3 in 2013, 4-door, 2-door or otherwise. Color me green, because that new Euro-spec 3-door is sexy, and it's the only one we may never get on this side of the pond.

Whether our new A3 will be called a 2013 or 2014 (or even 2015, according to some) is not yet clear, since European markets have different naming conventions and most of the news—since Audi is German—is coming out of Europe. The A3 was frankly ignored for the last several years, this incarnation included as it carries into 2013 from 2012 with little more different than choices in paint color, so it's doubtful anyone would make a fuss if Audi decided to forget the first half of 2013 ever happened. Wink wink, Audi.

This reviewer could not be more excited about the new generation, as is probably obvious. Rumor has it this new A3 sedan is a tip of the hat to the A4 that ensured Audi's position among the treasured luxury makers, the B5 A4 produced between 1995 and 2001, one of which I presently own. Back then the cup holders weren't the greatest, and the turbo engines were in their infancy, but it is still a fantastically modern car with impeccable road manners. The reportedly 2013 mid-year debut of the new A3 promises to incorporate the B5 A4's dignified style, Audi's latest gas-sipping 2-liter engines as used in the 2012 A3 (which have none of the B5's turbo quirks) and, even better, real American-size cup holders!

The cup holders are made possible by reclaiming space from the handbrake by making it into a dash toggle switch and moving the MMI Internet-connective navigation and infotainment system to an attractive retractable dash unit. Although our new A3 will share no body panels with the European A3, and, as per usual for Audi, will not advertise itself with grandiose exterior glam, the inside is reportedly much more upscale and packed with innumerable gizmos and gadgets geared specifically for impeccable comfort and ease of travel.

Audi does reportedly have plans for an eventual re-introduction of the 4-door hatchback and even a cabriolet body style, but it's anyone's guess how long until those are released to the U.S. Don't bet on the 62-mpg 1.6-liter oil-burning engine ever making its way over here either, nor anything else other than the 200-hp 2.0T capable of 22 mpg city/30 highway with the base 6-speed manual and the 30/42-mpg 140-hp TDI diesel edition. As was true for 2012, the Premium remains the only trim with the option of Quattro all-wheel drive available to 2.0T-equipped models, with the S Tronic 6-speed dual-clutch auto-manual optional for all at the cost of about 2 mpg of premium fuel.

Users ranked 2013 Audi A3 against other cars which they drove/owned. Each ranking was based on 9 categories. Here is the summary of top rankings.

Researched two cars on Cargurus that were rated by Cargurus as a 'good deal.' Both late model Audi A3s. Dealers were asking middle retail for each. Not cheap, $9700 and $13,000 Called the used car d...

How do you get it to show monthly payments

What Is The Lowest Down Payment I Can Get On An Audi?

i want to know how much can be the instalment per month of Audi A3 model 2013.

Compare Audi A3 to Related Models