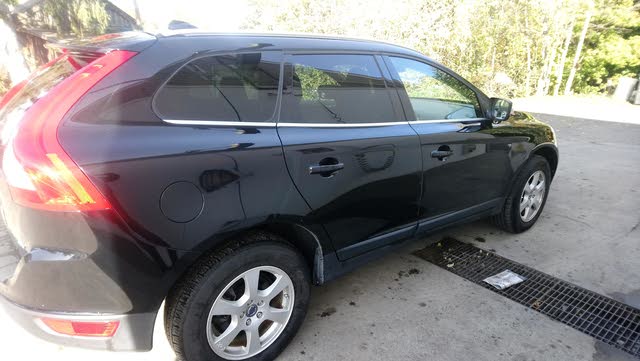 Volvo’s entry into the luxury crossover market, the XC60, gets bolder for 2012. Having built its reputation on family wagons, Volvo sought to break out of that stereotype with this premium utility vehicle, targeted at active, stylish families that don’t like to skimp on quality.

With the 2012 version, three trim-line subsets are introduced. The Premier (3.2 only) adds leather seating surfaces, a panoramic roof and silver roof rails; the Premier Plus adds goodies such as a 12-volt power outlet, power-operated tailgate and Personal Car Communicator, enabling Star Trek-level remote control of the vehicle; Platinum includes all the other features plus voice-activated navigation control and Volvo’s premier 650-watt sound system (those Swedes know how to rock!). Don’t worry — Bluetooth and an iPod/Auxiliary audio input jack come standard for all trims.

All in all, this isn’t your parents’ Volvo. It is hip and modern inside and out, although it still maintains that classic (some might say ugly) logo right in the middle of the grille. The whole family will love this roomy car, with its 67.4 cubic feet of cargo space. The driver’s seat sits in one of the coolest looking cockpits out there right now, almost Apple-like in its clean, classy design.

Drivers report a better ride, stronger pickup and smoother handling from this model. It’s still an SUV, so turns will always be an issue, but the engineers have improved performance considerably.

Volvo always prides itself on unique safety innovations, and the 2012 XC60 is no exception. Standard for all models this year is the City Safety system, which uses sensors to detect if traffic is slowed or stopped ahead. This feature is automatically triggered below 19 mph and can soften or completely avoid impact by reducing speed. Optional safety features include pedestrian and/or high-speed collision detection with automatic braking and blind-spot monitoring. All trims come standard with front seat side-impact and side-curtain airbags.

With its sleek looks, comfortable seating and gentle ride, the 2012 XC60 is one of the coolest SUVs on the market.

Dan Just bought a 2012 XC60 3.2 and am very happy with it. Ride is very comfortable and handling is easy and precise. I was pleasantly surprised at 30 mpg on drive home from dealer.

Why Do All The Dash Lights Stay On Even While Driving?

Good Day. I have a 2012 Volvo XC 60 and even after the engine is running the dash is full of lights on. Check engine, brake rights, Warning, traction control are some of them and the odometer is no...

MTNola asked a 2012 Volvo XC60 3.2 Premier AWD General question about a year ago

I just purchased a vehicle found on Car Gurus. I never initiated any contact via email. (Mattingly Motors, Metairie, LA) I would like to offer a review of the dealer but after entering my email addres...

If You Want To Tie A Long Item Onto The Roof Rack, Where Are The Tie Down H...

We always open our hood to help cool engine after parking in garage (turbo v6 engine), would this cause battery drain? Or why would our battery be dead (10.26 volts) at only 74k miles in mild climat...