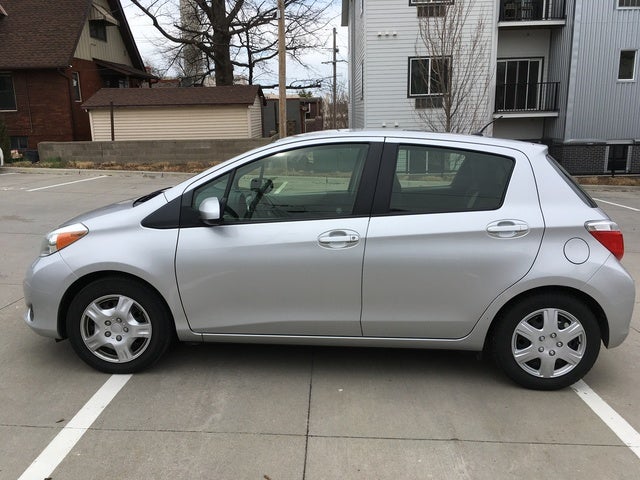 Toyota delivers a redesigned Yaris hatchback for 2012, with a longer wheelbase, sporty new styling, a revamped interior and upgraded safety features, including a whopping 9 airbags.

The Yaris retains its 1.5-liter, 106-hp engine from previous years, which provides adequate power but is starting to show its age, especially when compared to the powerplants in some competitive vehicles.

By updating the Yaris's interior and exterior, Toyota makes its entry-level subcompact a little more appealing in a very competitive market segment. The Yaris's more angular exterior styling, expanded cargo space and freshened interior should appeal to a variety of budget-oriented buyers, and by moving the instrument cluster back to its common position in front of the steering wheel, instead of off to the driver's right in the center stack, Toyota makes the Yaris a little less quirky and a little more mainstream. However, a more exciting Yaris might be just around the corner, as Toyota will no doubt drop a new, peppier powerplant under the subcompact's hood in 2013.

Officially redubbed the Yaris Liftback, the Toyota Yaris subcompact vehicle receives a makeover for 2012 that includes a sportier exterior design, an updated cabin and a longer wheelbase. The new Yaris, now in its third generation, stretches 2 inches longer than the previous version, to 98.8 inches, while overall length increases by 2.9 inches, to 153.5 inches. At the same time, the Yaris's height decreases by 0.6 inches, giving the vehicle a longer, lower profile. The longer wheelbase results in a 68 percent improvement in cargo space, with increases in headroom and legroom as well. In addition, Toyota pushes the wheels out to the vehicle's corners, providing better stability and giving the Yaris a more planted look.

The Yaris comes in entry-level L, mid-level LE and sport-oriented SE trims for 2012. The L and LE are available in 3- and 5-door body styles, while the SE comes only in a 5-door configuration. As part of the redesign, Toyota has dropped the 4-door Yaris sedan from the lineup, noting that most buyers prefer the hatchback body style.

The Yaris's exterior now displays a more angular look, with a steeply raked windshield, a sloping roof and a distinctive shoulder line that ascends from front to rear, resulting in a bolder appearance. Out front, the prominent nose features a V-shaped grille surrounded by wide, multi-reflector halogen headlights. The LE gets power folding exterior mirrors, while the sporty SE receives a number of unique exterior enhancements, including sport front and rear bumpers, a color-keyed grille with sport mesh inserts, smoked headlight trim, integrated foglights and a rear spoiler, as well as an aerodynamic rear underbody spoiler and a chrome exhaust tip.

The interior receives a redesign at well, with upgraded materials, better sound insulation and a soft-touch dash, as well as wider seats. All trims now come equipped with a longer list of standard features that includes air conditioning, power door locks, 6 cupholders and an AM/FM/CD audio system with a USB port and MP3 capability. In addition, all Yaris trims now include 9 standard airbags as well as a number of other new safety features.

Although Toyota made improvements to the Yaris's exterior and interior for 2012, the powerplant rolls over from the previous year unchanged, prompting some reviewers to consider the current redesign not quite finished. However, more than likely Toyota will unveil a new powerplant for the Yaris in 2013. For the moment, buyers who are considering the Yaris will certainly get a vehicle that's an improvement over the previous generation, but it will take another year or two for the automaker to complete the full updating process. 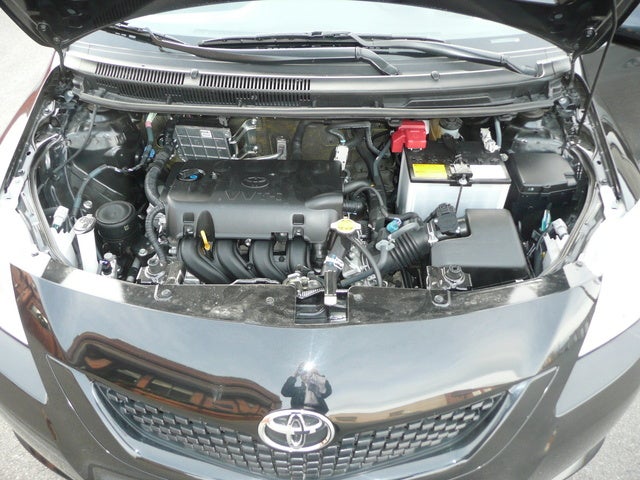 Toyota again equips the Yaris with a 1.5-liter 4-cylinder DOHC engine, which has powered the Yaris since 2005. The engine features variable valve timing with intelligence (VVT-i), which improves efficiency and fuel economy, and it produces 106 hp and 103 lb-ft of torque. A broad torque curve helps ensure optimal responsiveness off the mark and when passing at highway speeds, and for the most part the powerplant delivers decent performance around town, making the Yaris feel quick and nimble. However, some reviewers find the engine out-of-date for the class and consider the Yaris underpowered.

On the 3-door L and 5-door SE trims, the engine links to a 5-speed manual transmission, which comes standard, or an available 4-speed electronically controlled automatic transmission with intelligence. On all other trims, the automatic comes standard, and the manual is not available. Some testers prefer the smooth-shifting manual, noting that it delivers a more energetic driving experience, but many wish both transmissions came with additional gears. The engine posts good fuel economy numbers of 29/36 mpg with the manual transmission and 30/35 with the automatic, which are average numbers for the class.

With its lighter weight, longer wheelbase and pushed-out wheels, the redesigned Yaris feels more nimble than the previous version. The updated suspension features MacPherson struts in the front and a rear torsion-beam suspension tuned for an improved driving feel. In addition, Toyota upgraded the front stabilizer bar to 24.2 mm for a tighter, more stable feel. Wheel size also increases to 15 inches on L and LE versions and 16 inches on the SE.

All Yaris trims come equipped with electric power-assisted rack-and-pinion steering, which provides good road feel at highway speeds while delivering improved maneuverability at lower speeds. On SE trims, Toyota adjusts the steering ratio for a quicker, more responsive feel. The SE also rides on a sport-tuned suspension for a sportier driving experience and receives front and rear disc brakes. The other Yaris trims get disc brakes in the front and rear drums.

While the Yaris's cargo space increases for 2012, the cabin's dimensions remain about the same. Four adults can comfortably fit inside the Yaris, and three can squeeze into the back seat if needed. However, it might be a tight fit for taller passengers.

Up front, the most notable change is the repositioning of the instrument cluster. In the previous-generation Yaris, Toyota mounted all the gauges and dials on the center stack, with the intent of helping drivers keep their eyes on the road. The design proved controversial, however, so for 2012 Toyota defers to the more common setup, moving the instrument panel to the dash in front of the driver. However, Toyota maintained the simplicity of the dials and knobs that many reviewers praised in the previous version, making it easy for drivers to manage the vehicle's systems.

Previously considered somewhat spartan, the Yaris's cabin gets more standard features for 2012, including an AM/FM audio system across the line. The 4-speaker base system in the L trims includes a CD player, MP3 capability and USB and auxiliary audio jacks, while the upgraded 6-speaker unit in the LE and SE also includes Bluetooth, HD radio and auto sound leveling. Air conditioning, power door locks with illuminated entry, a tilt steering wheel and a fold-down rear seat are also part of the standard package. Cloth upholstery with 4-way adjustable seats in the front also come standard on the L trims.

The IIHS gave the 2012 Yaris a top rating of Good for protecting passengers in all types of crashes, including frontal, side and rollover. The NHTSA gave the Yaris an overall rating of 4 out of 5 stars, which breaks down to 5 stars for side-impact crashes and 4 stars for frontal and rollover crashes.

The 2012 Yaris gets generally good marks from owners, who like the many updated features of the value-priced subcompact, including its generous cargo space, comfortable seats and repositioned instrumentation and controls. They also like its ride and handling, calling it zippy and agile in the city, although some find the ride a little too harsh. Owners also repeatedly single out the Yaris's reliability and its good fuel economy. The exterior styling update also draws positive comments from owners. However, they do point out a few shortcomings, such as the lack of a center armrest/console with adequate storage, or greater adjustment for the steering wheel. Overall, however, owners feel they get their money's worth with the 2012 Yaris.

Users ranked 2012 Toyota Yaris against other cars which they drove/owned. Each ranking was based on 9 categories. Here is the summary of top rankings.

Have you driven a 2012 Toyota Yaris?
Rank This Car

2012 Yaris Has No Pedal Response

2012 yaris my old lady left lift on and killed battery. Jumped it off and now no pedal so car won't move just idle

31 views with 3 answers (last answer about a year ago)

When You Go To Change You Serpentine Belt Can You Damage Anything By Puttin...

How Ofter Is It Really The ECU/ECM

I have a 2012 toyota yaris. have a check engine light that has come on and off several times over the last month and 1/2 but seem sto be on more than not. The first time it came on it threw codes P0...